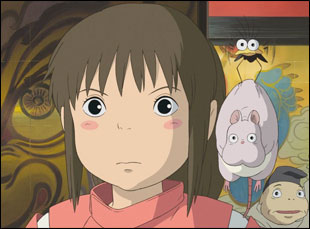 “Spirited Away” is a Walt Disney Studio Ghibli production created and directed by the masterful genius, Hayao Miyazaki. Hayao Miyazaki is well known in both Japan and in westernized cultures as being one of the greatest animated filmmakers and storytellers of all time. He has created many wondrous works of art, and most stand unmatched to anything else. However his most successful creation, and the one that finally earned him a well-anticipated, Academy Award, was “Spirited Away.”
Set in modern day Japan, “Spirited Away” revolves around a ten-year-old girl, Chihiro Ogino (or Sen), who one day accidentally wanders into the spirit realm. Chihiro winds up getting a job at the spiritual bathhouse, a place to where all kinds of spirits journey to in order to relax and replenish themselves. There, she encounters many wondrous spirits and other strange beings such as witches, makes new friends and finds herself in lots of bizarre and unimaginable situations. “Spirited Away” was released in Japan in the year 2001. It truly wowed the country, leaving everyone who saw it in awe and excitement for Miyazaki's next motion picture. It was brought over to American theaters two years later in 2003, and has since taken the animated film industry by storm, as it features likable, interesting as well as sympathetic characters, beautiful art work and animation and a spectacula soundtrack and story line. It has received both a Japanese and English dubbed version plus an English subtitled version. It was licensed by Walt Disney Co., and made as a Studio Ghibli production. It received the “Best Animated Film of the Year” Academy Award in 2003. It is considered one of the most well-known and successful Japanese animated (or anime) films on both sides of the ocean.
“Spirited Away” reflects and is inspired by many aspects of both modern and traditional Japanese culture. When Chihiro and her parents first (unknowingly) step through to the Spirit Realm, you may notice that the road leading up to it is lined with multiple, little wooden shrines. Shrines are used in Japanese culture as a way to pray to the spirits and to ask them for good fortune. Shrines are a big part of the Japanese native religion known as Shinto. In this religion, it is their spiritual belief that all objects, not just living beings, but also abiotic beings such as rocks and water, have souls, or spirits. These spirits are the beings responsible for the creation of all things in nature. “Spirited Away” refers multiple times to Shinto, as many of the spirits reflect these beings in nature and religion. In the Spirit Realm, all of these spirits gather to rest and relax at the bathhouse. A traditional Japanese bathhouse is used as a place where people can relax, socialize with each other and be cleansed. The brilliant Hayao Miyazaki uses this as an opportunity to incorporate tradition as a juxtaposed with one of his important trademarks as a filmmaker. His creations serve as a critique of how humans have polluted Earth for centuries. One of the most well-known scenes in the film features the ancient Unnamed River Spirit’s visit to the bathhouse. Before his true form is revealed, the bathhouse staff see him as a disgusting, smelly heap of mud. With the help of Chihiro, they soon see that he had multiple man-made objects trapped inside him, causing his pollution. 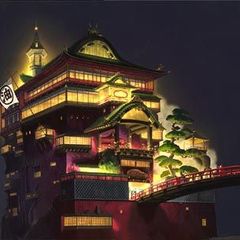 The bathhouse is also filled with several traditional items such as Tatami mats. These keep in place the tradition of removing shoes and socks before entering rooms, such as living quarters. The characters in the Spirit Realm enjoy Sake. Sake is a traditional Japanese rice wine and a crucial part of the Shinto religion. It symbolizes the different life stages of human beings. It is consumed during important celebrations, such as marriage. When the River Spirit is cleansed, he leaves a huge pile of gold behind as a tip for the staff. As a celebration, Yubaba (the bathhouse head), declares that Sake is on the house for everyone. Japan is famous for operating bullet trains, they run on magnets and are known for their high speed. The systems weave around in all cities and towns of Japan. This is similar to that of the train in “Spirited Away.” Although it is not high tech, it is known for journeying to all areas of the Spirit Realm. As you can see, the film “Spirited Away” is both subtly and heavily inspired/influenced by multiple aspects of traditional and modern Japanese culture. It has also given westernized cultures a chance to taste and experience Japanese cultures for themselves. 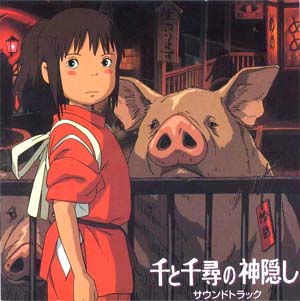 “Spirited Away” is just the beginning of Hayao Miyazaki’s spectacular films (or anime films in general). If you enjoyed this film, there are two films that I point you towards, both of which were produced by Studio Ghibli and created and directed by Hayao Miyazaki. “Howl’s Moving Castle”(Howl no Ugoku Shiro) is the first of the two. It has a similar art style to “Spirited Away,” and the same immense character development, story line and outstandingly creative plot. Like “Spirited Away,” “Howl’s Moving Castle” features strange non-human creatures such as witches and wizards. It centers on a once young girl, Sophie, who was cursed by a witch and transformed into an old, crippled woman. In order to break the curse, Sophie goes on a wild adventure, meeting many strange and wondrous creatures. As with the character Chihiro, this story centers on a girl trying to break a curse caused by a powerful magic, completely out of the human realm, and her attempt to return home unharmed. It is a film you should definitely make time to watch. The second is the movie “The Wind Rises(Kaze Tachinu).” Placed in a pre and contemporary World War II setting, this film has the ability to enchant and fascinate any viewer who takes the time to watch. Both of these movies have been released in Japan, and have received an official English dubbed and subbed version.
So far, in my recent experience as a fan of anime and manga, there has been one question and/or remark that I have constantly heard. Can only “true” fans of the anime and manga industry appreciate and enjoy “Spirited Away” or any other Studio Ghibli film? The answer is simple. No. Miyazaki’s films, especially “Spirited Away” have been known to redefine how effective an animated feature can be. They have shown a new way to artfully share a truly amazing and memorable story. “Spirited Away” is specifically recognized for its originality and uniqueness. It went places artistically and told its own story in a way that had never been done before Hayao Miyazaki’s time. It established a style based on suburb soundtracks and out of the box story lines. “Spirited Away” is a film that not just anime and manga fans, but everyone should witness for themselves during their lifetime. It will introduce you to a whole new concept of film making, culture and storytelling. I mean come on, it won "Best Animated Picture of the Year" for a reason right? I would even bet that people who have watched “Spirited Away” were inspired to explore the anime and manga industry further and have become full-fledged members of the community themselves. In a way that is sort of how I was introduced. Simply by watching Studio Ghibili’s “Ponyo” I was able to find my new passion and hobby. Anime’s unique worlds, stories, and characters is something I believe everyone should be introduced to, and at least give a fair shot. It could even inspire the next mastermind like Hayao Miyazaki, to pursue a life of film making, anime producing, manga drawing or whatever sparks their interests. Beware though, he is one hard person to live up to. Hayao Miyazaki’s work is a part of my own personal childhood memories as well and I believe it is a memory and experience that everyone should have. 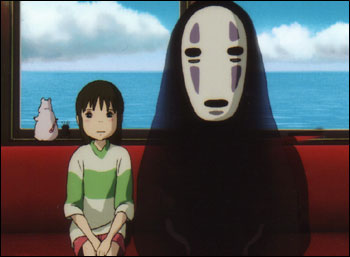 “Spirited Away” is a critically acclaimed masterpiece, and for a very good reason. It features, and even in its own way reinvents both traditional and modern Japanese cultural values and introduces it to other civilizations. It hooks viewers in and leaves them wanting more. The best part? There is more for fans to digest! Okay, there may not be a specific sequel to “Spirited Away” (although I wish that there were), but Hayao Miyazaki has provided us with films that have equal, if not slightly greater, film quality, and value. It is highly deserving of its Academy Award. If you have seen it, congratulations! You have lived your life. If not, what are you waiting for? Drop everything and watch it today. I think I have provided more than enough reason to.