From Nausicaa to Doraemon, here are our list of anime with environmental themes based on their MAL score. 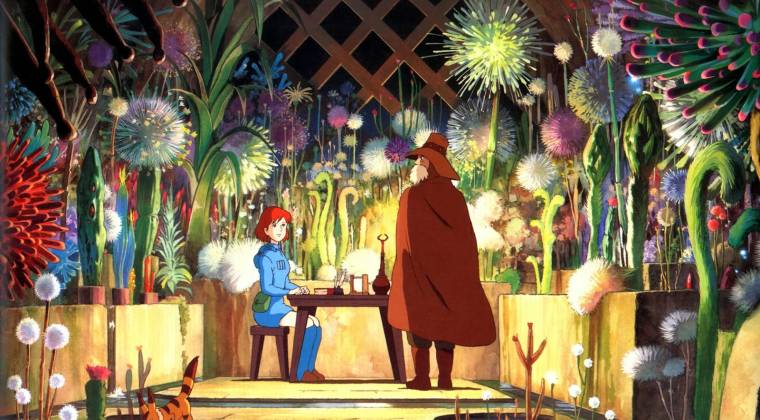 Still of Nausicaä chatting to Lord Yupa from Nausicaä of the Valley of the Wind. Studio Ghibli

Important environmental issues have been in the news for several decades now, and that’s not surprising given the current state of the earth’s natural ecosystems. Whether it’s our excessive pollution of the planet’s oceans, the melting of the Arctic ice caps, or the erratic weather cycles, there’s much to be concerned about.

Anime creators have not ignored this important topic. There’s been plenty of excellent anime released that highlight the plight of our planet. The legendary director, Hayao Miyazaki, has done a phenomenal job by injecting his epic tales with environmental themes that make us think twice about our relationship with nature. Many other directors have also pursued their unique visions about environmentalism. Here are the top 10 anime that every eco-conscious anime fan needs to watch.

Note: As usual, we've limited our list to only one Miyazaki film, for obvious reasons. 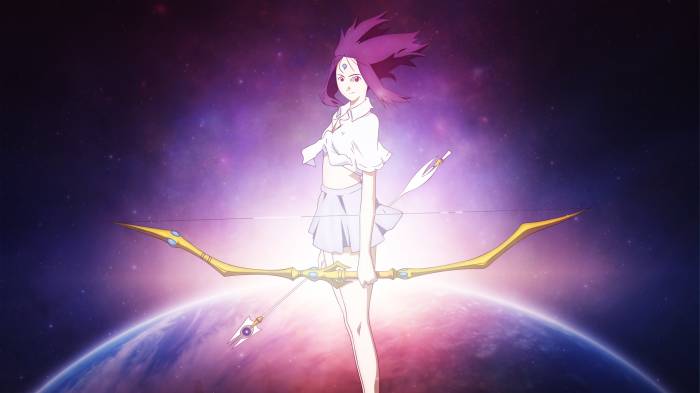 Still of Juna Ariyoshi holding her bow and arrow from Arjuna. Satelight.

Arjuna is an ordinary high school girl who leads a troubled personal life. Things become even more complicated after she dies in a motorbike accident. She’s shown the fate of the earth, which involves its destruction by worm-like creatures known as Raaja. These Raaja vary in size, from tiny bacteria-like creatures through to massive entities that truly look like they can destroy all life on the planet.

Shoji Kawamori, the creator of Arjuna, visited India and Nepal and noticed how nature flourishes in these countries. Therefore, it’s not surprising that a key message in this series is about how everything needs to return to its original state, where nature is allowed to grow unburdened. 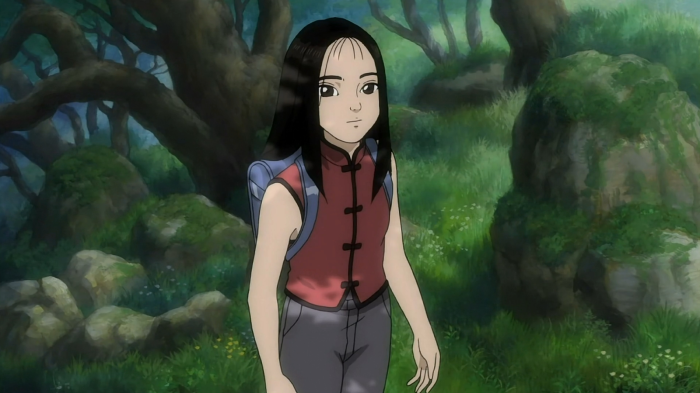 Still of Miyori Mashima standing in the forest from Miyori's Forest. Nippon Animation.

Miyori’s Forest is a stunningly beautiful anime that’s reminiscent of Studio Ghibli’s works. Even the color palette has a similar pastoral tone portraying the natural surroundings effectively. Much of the anime takes place in a Japanese village and the nearby forest, which is home to many animals and mysterious spirits. These spirits gradually reveal themselves to the lonely girl, Miyori, who plays a key role in protecting the forest from its doom. An impending dam project by unscrupulous individuals will submerge the forest and kill off its wildlife. Miyori’s Forest certainly delves deeply into humanity’s immoral actions against animals and the environment. 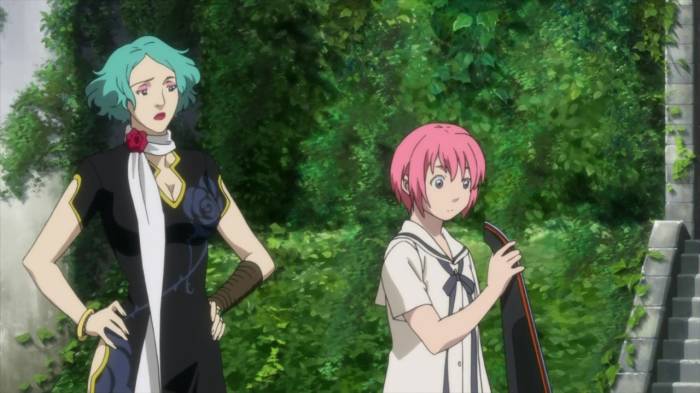 Still of Momoko looking at Kuniko Houjou and her boomerang from Shangri-La. Gonzo.

Atlus is a utopian city that’s segregated from the rest of Japanese society that's been devastated by the effects of global warming and earthquakes. The government of Atlus keeps its gates closed and quashes any attempts by outsiders to breach its periphery. But the courageous Kuniko plans to open up those gates and guide her people to what she considers to be the promised land. 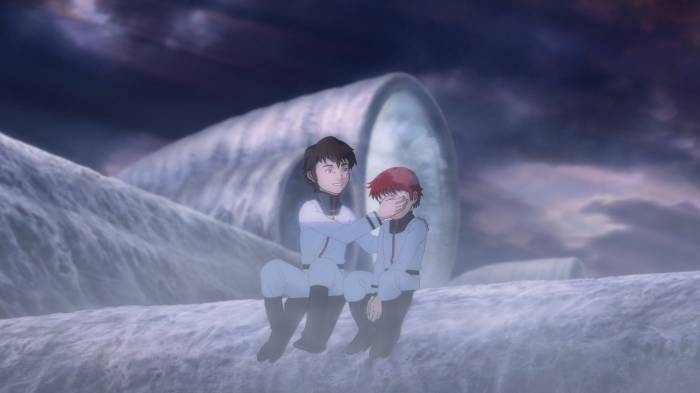 Wonderful Days give us a sobering picture of what happens once the earth’s ecosystem collapses due to environmental pollution. The world becomes an inhospitable wasteland where life is incredibly hard for most human survivors, apart from a few elite who live in the city of Ecoban that uses the pollution as an energy source. The divide between the haves and have nots couldn’t be starker.

6. Giniro no Kami no Agito (Origin: Spirits of the Past) 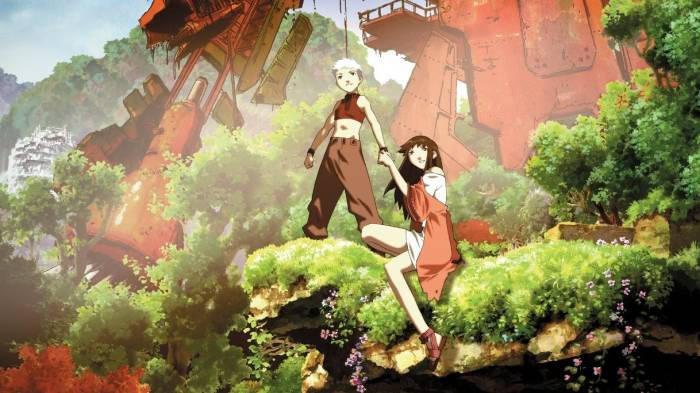 Still of Toola Cm Sacl holding onto Agito from Origin: Spirits of the Past. Gonzo.

The world is no longer like what it used to be due to a failed DNA experiment that has completely altered the plant life, which has become hostile, wiping out much of humanity. The few remnants struggle to survive in this deadly environment and try to retain a truce with a threatening forest. But the tide may turn in humanity’s favor after the young villager, Agito, comes across a mysterious girl in the forest whose father built a powerful weapon. Will this weapon destroy the forest, or will it have effects that are far more devastating? 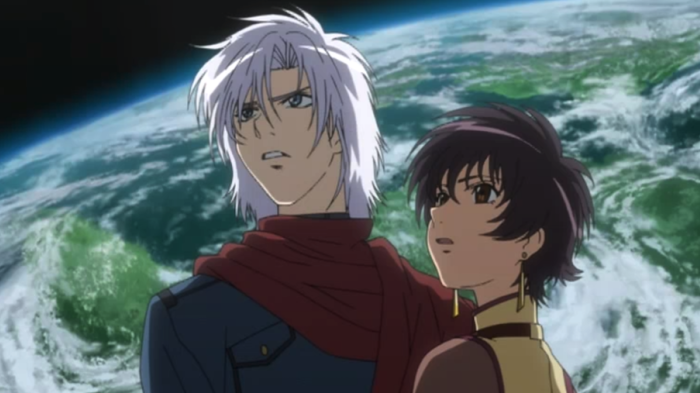 Still of Thor Klein and Tiz as adults from Jyu Oh Sei. Bones

After the murder of their parents, the young twins, Thor and Rai Klein, are sent to the planet Chimaera. This strange planet they now find themselves on has been terraformed and overwhelmed by flesh-eating plants, and only a small number of humans live there. The siblings must now survive in Chimaera’s hostile natural environment while trying to conquer the four human factions known as the “Rings,” thus qualifying to leave the planet. 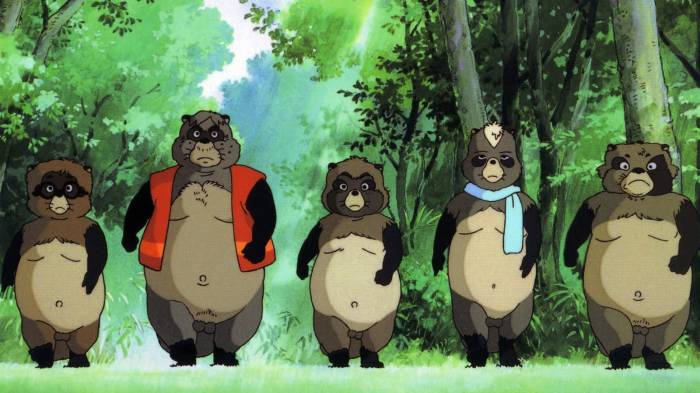 Still of Okiyo, Shoukichi, Tamasaburou and the rest of the takumi from Pom Poko. Kyoto Animation

Pom Poko is a bizarre and funny anime that revolves around a group Japanese raccoon dogs or tanuki. But the environmental themes come through thick and fast, as the natural habitat of the tanuki is under threat by a construction company. The distressed tanuki fight back and teach that company a hard lesson, but their plight is something that many animals face in the real world. This anime does an excellent job of pointing out the injustice of destroying the natural habitats of our furry friends, whether that’s for profit or for humans to expand their own domain. 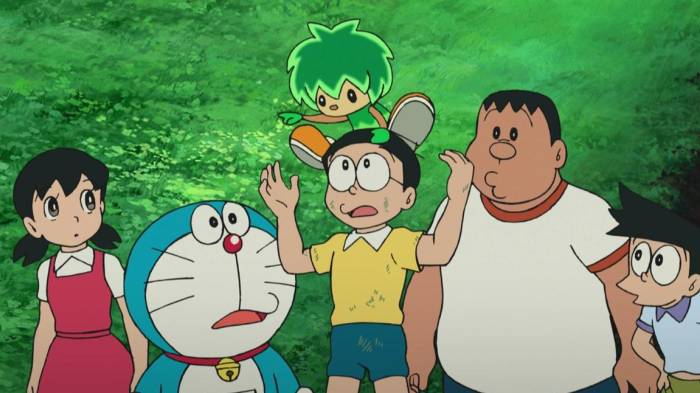 Still of Doraemon, Nobita, Kibo, Takeshi and the rest of the crew from Doraemon the Movie: Nobita and the Green Giant Legend. Shin-Ei Animation

Humanity has damaged all the green plant life on earth, and this has riled an alien race from the Planet of Green. They’ve decided to invade earth and teach the humans a hard lesson because of their mistreatment of the environment. Now it’s up to Doraemon, Nobita, and their new tree-boy buddy, Kibo, to save the day. 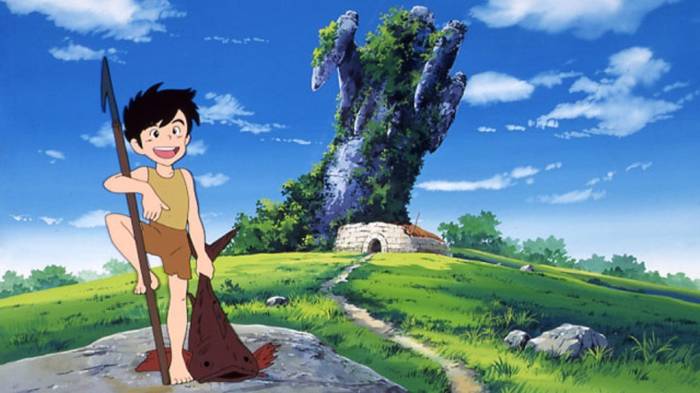 Still of Conan holding his spear and a fish from Future Boy Conan. Nippon Animation

Almost half of humankind was wiped out by a powerful ultra-magnetic weapon, which also resulted in ripping the continents apart and affecting the axis of the earth. As devastating as this all sounds, life still continues in the aftermath of World War III. The main protagonist, Conan, has lived on a deserted island his whole life and develops a variety of skills such as fishing, diving, and fighting. After meeting a young girl, Lana, he ventures outside of his island to confront evil forces that look to subjugate the remnants of society.

It's only fitting that the official directorial debut of Miyazaki would feature glimpses of the same environmental themes he would come to fully explore in his films. A lot of Studio Ghibli fans might not have heard of this one, but it'd definitely be worth checking out.

1. Kaze no Tani no Nausicaä (Nausicaä of the Valley of the Wind) 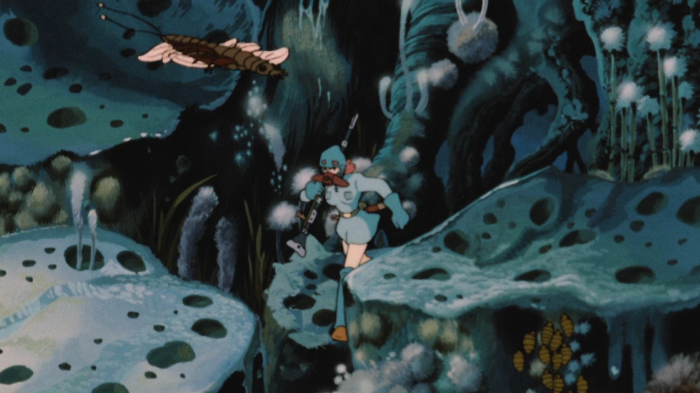 Still of Nausicaä walking through the toxic jungle from Nausicaä of the Valley of the Wind. Studio Ghibli

Nausicaä is the princess of a quaint village nestled in a picturesque valley. And the folks of this village are ecologically savvy, as they harness renewable technologies, and get along with the gigantic insectoid creatures that roam the nearby toxic wastelands. Unfortunately, this peaceful coexistence and nature’s delicate balance is under threat by the invading Tolmekian military.

And this is the brilliance of Miyazaki’s storytelling, in the way he explores the sanctity of mother nature and how her mistreatment by humanity brings forth misfortune and catastrophe to all. One could even argue that the Tolmekian military is analogous to the current day military industrial complex and corporations, which hurt third-world countries with vast natural resources.

Let's take a quick jog around memory lane and remember those anime you used to watch and enjoy as kids. Feel the nostalgia and see if your favorites made the list and discover more that other children enjoyed.