In this week's Prison School, the inmates prepare their counterattack for the Underground Student Council. They all work together to make sure their plan succeeds, which involves taking things to new extremes. 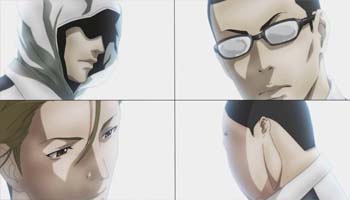 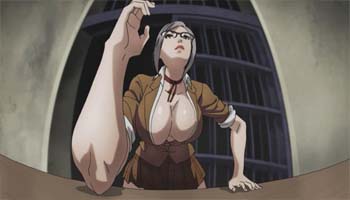 In this episode of Prison School, the inmates set out to prove that the Underground Student Council tricked them into breaking the prison rules with the DTO plan. They must now prove the DTO plan exists, so they can convince the chairman not to expel them. The Underground Student Council is already on top of things, as they make sure the inmates remain on lockdown until the day of their expulsion. This makes it hard for the inmates to think of an idea to find the DTO plan, since they're heavily guarded from this point on. They have concluded that no physical copy of the plan exists, but Shingo remembers seeing the plan in an email in the correction office. They must now find a way to retrieve the email. As always, Gakuto conjures up a strategy, but executing it would be difficult. Luckily, all five members are now in on the plan. There's a better chance of it succeeding than before when it was just him and Kiyoshi. Gakuto's plan is simple, because it just involves a game of arm wrestling. 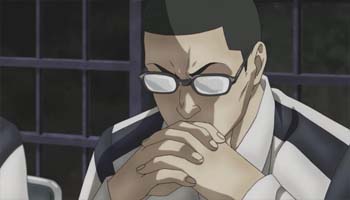 This episode features all the great elements of the anime. It had Gakuto's brilliant mind in display, since he comes up with a way to obtain the DTO plan. It also features the intense storytelling that'll have you on the edge of your seat, because the plan is set in a desperate and hasty way with a chance of it failing at any moment. The kind of suspense is similar to when Kiyoshi escaped prison, as he was almost caught on two separate occasions. The thrill of the story wasn't felt in the last story arc when Mari dished out her DTO plan, since the inmates didn't fight back, and felt desperate. With the threat of being expelled, the inmates are now fired up to execute even the flimsiest of plans. This episode also features one more great element of the story: Meiko's excessive fan service. She usually does random fan service with no real relation to the story, and her punishments are just sexually inspired by themselves. In this episode, she is in the spotlight when she accepts the arm wrestling challenge from the inmates. 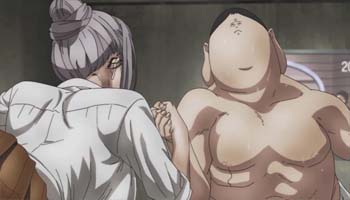 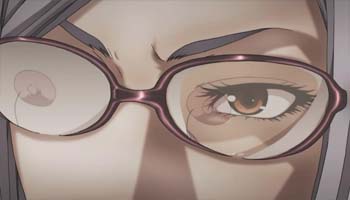 The challenge is just to buy Gakuto time as he attempts to retrieve the DTO plan, but it could definitely be considered one of the best moments of the series. As each of the inmates challenge Meiko, a lot of stupid things happen. The suspense of the story is now combined with the comedic part of it when each guy fails in defeating Meiko. The funniest of all had to be Meiko herself when she took on Andre, because she was mesmerized by his one long nipple hair. Meiko even does her own narration as she as she gazes at the hair, and she calls it a lone tree in a desert. It bought Gakuto some time as Andre is able to drag the battle out. Things looks bleak when Andre starts getting off on Meiko spitting on him, but it's extremely funny since Meiko is still captivated by the hair. In the end, Gakuto is able to infiltrate the correction office and return without Meiko noticing. He wasn't able to get the DTO plan though, since he was caught up in returning to the prison cell first. Their first plan failed, and they spend the rest of the episode feeling bad about it. 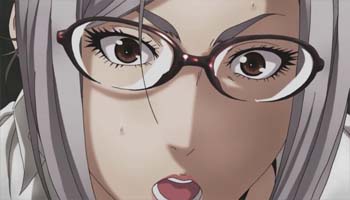 Meiko is always utilized by the show as this walking sex symbol, but it's interesting how she's slowly being incorporated into the story. She always has a sense of humor to her, but it's nothing like seeing her completely mesmerized by Andre's long nipple hair. The most surprising of all would have to be when she blushed at some point in the fight. She isn't the type to do that since she's always so serious, but it makes you wonder what other surprises she has in store for us. She might be softening up towards the inmates, but it's a bit unlikely since she worships Mari. 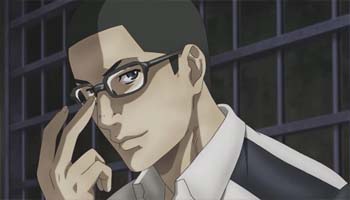 The smart Gakuto is back for this story arc, as the inmates find a way to beat their expulsion. His plan in this episode is pretty solid, but there are outside factors that made it fail. Gakuto is the type of guy to seize an opportunity, since he once made Kiyoshi's escape from school a lot more plausible, so he's sure to capitalize on any moment the story provides him. He looks defeated when his first plan failed, but he's sure to come up with a much better one in no time. It's exciting to think about him going head to head with Mari, and the opportunity might be coming soon.

Gakuto's next plan might give the prisoners the win, but the Underground Student Council will not take it lying down. The narrative always has miracles aplenty for the inmates,, so anything can happen at this point.

The DTO plan might be revealed on the day of their expulsion, and the look on the girls' faces would definitely be priceless.