Top 10 Video Games That Are Screaming For Anime Adaptations

Plenty of games are sitting on store shelves, download sites, and your personal game collection that have yet to receive the anime treatment. We're going to look at some of them and find out why they're just begging for anime adaptations!

Games That Need Just A Bit Of That Anime Lovin'

Game Artwork from Chrono Trigger featuring Crono and the gang.

Hey, video games and anime go together like peanut butter and jelly. It’s easy to see why that is, considering that both mediums are incredibly visual and action-packed! Furthermore, they appeal to a similar fan base that appreciates adventure, cool characters, and intriguing stories.

There are tons of anime to video game adaptations. And yeah, there’s also a ton of video game to anime adaptations, but we’re willing to bet that there’s plenty of great games that have yet to receive the anime treatment. We plan to rectify this oversight by providing a list of killer video games that are screaming and shouting for their own anime series!

We’re taking a look at a few classic, indie and modern triple-A titles that fit the bill! Screenshot from the Bloodborne game

A recent and positive trend in gaming is the increased difficulty level of certain titles. So, have gamers become masochistic or did they just get tired of the lack of challenging games over the past 2 – 3 console generations? Whatever the case, FromSoftware is no stranger at delivering some rock hard action RPGs; after all, this is the same developer that gave us the Demon’s Souls and Dark Souls games.

Bloodborne transports gamers to a grizzly world that’s both nightmarish and enticing. It combines the very best elements of hack ‘n slash action and dungeon crawling, which have garnered it much critical acclaim. We’d love to see this one get an anime adaptation that will properly convey its dark fantasy setting in all its Lovecraftian gory. The horror, suspense, and ugly misshaped monsters within Bloodborne will certainly make for a frightening anime. And since many players tend to quit the game due to its punishing difficulty lelvel, the anime will allow them to see the progression and conclusion of events instead of just dying a million times and then giving up. There's no shortage of excellent indie games being released these days. However, every once in a while we get an exceedingly special title coming out of left-field which manages to capture everyone’s attention. Hyper Light Drifter is such a title, and it's blown us away with its unique art direction and homage to 8-bit and 16-bit action RPGs.

We’ll never get tired of Link and his adventures, but there’s always room for unique new heroes. Something tells us that ‘The Drifter’ would make the ideal lead in a Miyazaki-inspired anime. After all, Nausicaä of the Valley of the Wind did influence the creator of Hyper Light Drifter. 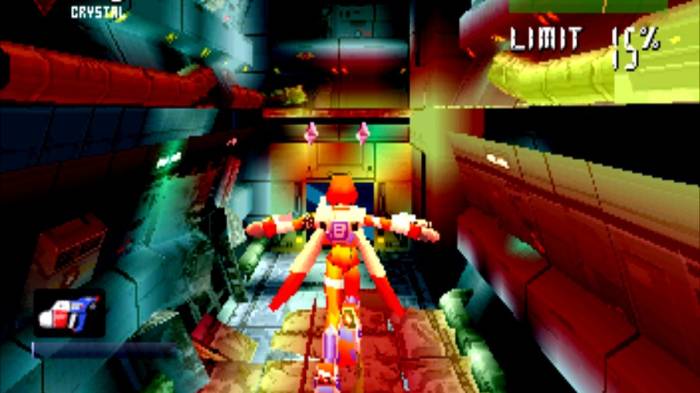 Screenshot from the Burning Rangers game

There’s hardly a gamer that hasn’t heard of Sonic the Hedgehog, but few know about Burning Rangers. It’s a shame, as this futuristic firefighting game is one of Yuji Naka’s and Sonic Team’s most unique titles. Burning Rangers was truly innovative because its voice navigation system helped guide players through the stages, without the need for maps. This system worked incredibly well and a feature that was unavailable in just about every other action game of that era.

I found Burning Ranger’s sci-fi anime vibe appealing and reminded me of some favorite shows such as Science Team Gatchaman and Macross. The firefighting team consisting of Lead Phoneix, Tillis, Chris Partn, Big Landman, and Shou Amabane have more personality than is typical of action game protagonists. Their interaction and banter, made me feel like I was part of the team and saving lives in a heroic anime.

Burning Ranger also features some incredibly cool anime cut-scenes, which were some of the best to appear on a game console during the 90’s. These made me excited to play the game, but also made me wish for an entire Burning Rangers TV anime series that never came to be. I’d love to see a modern update of this game but also an anime series to finally do it justice! Screenshot from the Sin & Punishment game

The PlayStation and Windows 95 weren't the only platforms that defined gaming during the mid-to-late 90's. The Nintendo 64 was home to many of Nintendo's finest games, which consisted predominantly of platformers and other cutesy titles. However, naturally there were also a few titles that didn't enjoy the same fanfare, like the much over-looked Sin & Punishment due to it being released late in the Nintendo 64's life cycle.

Sin & Punishment was co-developed by Treasure and Nintendo Research & Development 1, and it shows. The end product is a high-octane shooting and action masterpiece that pushed the Nintendo 64 to its limits. Gamers that played through Sin & Punishment's aircraft carrier stage and over-the-top boss fights experienced plenty of jaw-dropping moments.

But Sin & Punishment isn't just about non-stop shooting action, as a post-apocalyptic sci-fi story unfolds during key points in the game. The game kicks things off with a trio of angsty teens who fight to save Japan from a shadowy organization and mutated creatures. However, the story gradually delves into weirder territory as things progress and finally ends in a cliffhanger. The sequel, Sin & Punishment: Star Successor on the Nintendo Wii, does answer a few questions left from the first game but not adequately. An anime adaptation would go a long way in filling in the blanks and setting the pace of the narrative since it won't need to keep up with the intense action sequences of the game. I have a soft spot for adventure games, particularly those that attempt something different from the norm. The creator of the Ace Attorney series, Shu Takumi, definitely has the Midas touch when it comes to creating amazing adventures. And his Ghost Trick game certainly fits in this category.

Ghost Trick’s characters are a bunch of oddballs, but they’re incredibly well animated and characterized. The main protagonist is Sissel, who is actually dead and trying to solve the mystery of his own murder. He ends up working with Lynne, who was the only other individual close by when the murder took place.

Throughout the adventure, they come across a variety of eccentric characters such as Inspector Cabanela and the Justice Minister. These two would be right at home in any comedy anime. Cabanela’s over-the-top mannerisms and body postures are so hilarious that I wouldn’t mind seeing an entire series with him in a key role. The Justice Minister is so overly nervous that he would give any sweaty lovelorn otaku a run for his money!

The entire game is brimming with character while the ghost and murder mystery theme is just awesome. There's plenty of plot twists and wacky situations here that could fill up an entire TV series or two. It would be almost criminal if it never receives an anime adaptation. Screenshot from the Overwatch game

A growing number of Western game developers draw inspiration from anime, and it’s always cool when a prominent developer showcases this. Blizzard Entertainment’s artists created a diverse range of characters that certainly borrow many aesthetic elements from anime. Characters sport spiky hairstyles, large anime-like eyes, stylish clothing, and mechanical cybernetic augmentations that would look at home in any sci-fi anime. Heck, even some of the characters are Japanese, like Hanzo Shimada.

Blizzard released some animated shorts when promoting the game, but we’d definitely enjoy an anime series that takes things further! Overwatch’s character roster is vast, while each character has an elaborate backstory. If anything, it would be great to delve deeper in those backstories with a long-running anime TV series that also presents tons of wild shooting scenes. Lunar: Silver Star Story Complete is a remake of the Lunar: The Silver Star on the Sega Mega-CD. It’s an excellent JRPG that won over plenty of RPG and anime fans upon release due to its epic quest, character development, and traditional anime aesthetics. The remake boasts some incredible anime cut-scenes that are equal in quality to many anime TV and OVA series of the 90’s. Astute anime fans will notice that the characters resemble those in Giant Robo and Yamato 2520 and that’s because the character designer was Toshiyuki Kubooka.

Plenty of effort was put in creating some of the most memorable and charismatic characters to appear in a JRPG. Even the main villain, Ghaleon, is well conceived and not just some cookie-cutter bad guy that simply wants to wreak havoc. His motivations are deep and he acts in a very human-like manner unlike most video game bad guys. The entire cast of Lunar: Silver Star Story really needs to debut in their own anime series to capture the hearts of a new generation of anime fans. The Metal Gear Solid series is one of the games industry’s most celebrated series, while Solid Snake is one of its most iconic characters. It stands apart from other military-themed and stealth games due to its rich lore and diverse characters. Heavy anime influences, which draw inspiration from hard-boiled 80’s OVA give it it's edge. Yeah, Hideo Kojima’s games are a pastiche of sorts but of the right kind!

Therefore, it boggles the mind that we haven’t received an anime adaptation based on this monumental game. Oh, what we’d give to see an anime with an epic showdown between Snake and Grey Fox! Screenshot from the Nier: Automata game

Yoko Taro is one of Japan’s more eccentric game creators who’s also responsible for the Drakengard series. He has a penchant for conceiving unique worlds, sadistic female characters, and thought-provoking stories that you’ll never forget!

When Taro and one of the world’s finest action game developers, PlatinumGames, decided to team up for the next installment of Nier, gamers took notice. Without any doubt, the final product is amazing and meets the expectations of hardcore gamers. When they finally put down those controllers, they’ll be craving more of 2B and her crazy hack and slash antics.

Some fans may watch a Nier anime just to see more of their favorite sexy android. But we reckon that Nier’s rich universe, desolate environments, complex story and crazy plot twists will make for a deep anime that will keep everyone on edge. Screenshot from the Chrono Trigger game

It’s the most celebrated JRPG and also considered one of the finest games of all time! Yeah, we’re talking about Chrono Trigger that blew us away back in 1995 when it was first released and still manages to enthrall us to this day. The cool time-travelling plot, haunting music and charismatic characters designed by Akira Toriyama are hallmarks of this title.

A short promotional OVA was released in the late 90’s. It’s humorous but not what most Chrono Trigger fans wanted. Would it be too much to ask for a fantasy anime TV series that will finally meet expectations? We'd kill for an anime adaptation that brings back all our favorite Chrono Trigger characters with a soundtrack by the original composers, Yasunori Matsuda and Nobuo Uematsu.