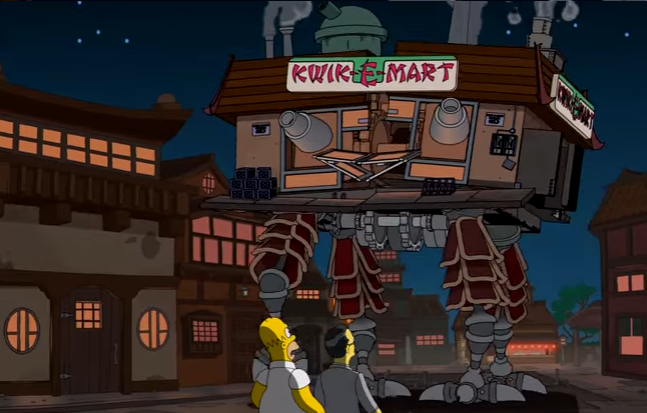 Over the last two decades, western animation studios have shown an increasing amount of anime influences in their art direction. One needs only to take a look at Avatar: The Last Airbender to see a perfect example of this. Other cartoons may not have that artistic, anime leaning, but enjoy the source material so much that they're willing to make an homage to it or outright parody it in loving jest. There are anime jokes and references aplenty in English language cartoons, but what are some of the best? Here's a top 10 list of the best anime parodies in western animation to answer that question. 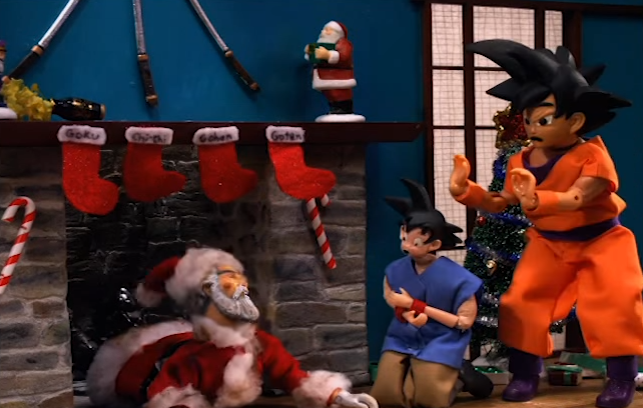 Being a show that works with stop motion animation and action figures, an actual anime art style isn’t attainable, but that hasn’t stopped Robot Chicken from parodying a variety of classic anime series. Voltron, Sailor Moon, and Pokemon have all been ripped apart in loving fashion, but the Dragon Ball Z Christmas sketch ranks among the show’s best efforts. Goku and Gohan must help Santa save Christmas from a series of holiday themed villains. The climactic Christmas clash, culminates in an AKIRA homage that has to be seen to be fully appreciated. 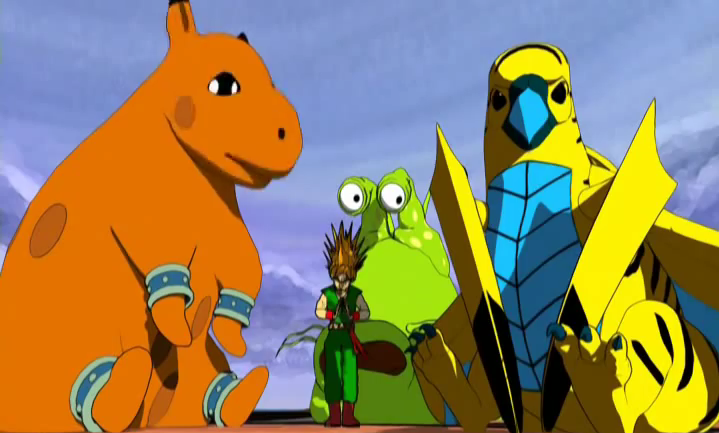 Despite its computer animation being quite dated by today’s standards, ReBoot was a wonderfully written show that often delved into the realm of parody. The world of Pokémon and Dragon Ball Z was tackled in the fourth season episode, “My Two Bobs.” Though the subject matter of the parody scene is primarily Pokémon, the character models used draw heavily from DBZ clichés…pointy hair especially. What makes the scene especially noteworthy is how the characters, Enzo and Bob, continuously poke fun at anime and gaming stereotypes. They find the idea of holding monsters captive - only to then force them to battle - a horribly barbaric act, and the fact that they just have to wait around for a Pokemon trainer to finally arrive at their gym is painfully dull. Capping the parody off is Bob's hysterically concise solution to winning a Pokemon battle, which should give experienced Pokemon trainers a hardy laugh. 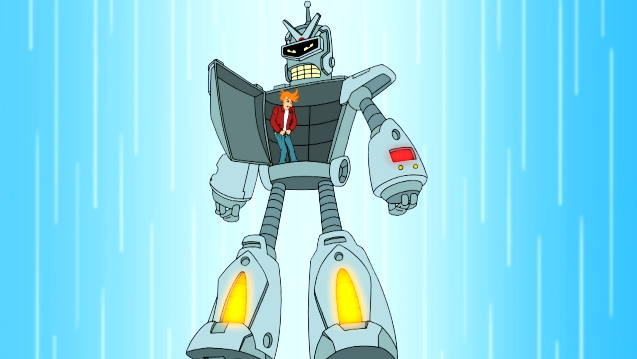 Just like The Simpsons would often feature episodes that dove into alternate worlds and fun, one-shot story segments, so too would Matt Groening's other television creaton, Futurama. In one of these alternate reality episodes, fittingly titled, "Reincarnation," the cast of the show is reimagined three different ways, as if they were reincarnated into different forms, somewhere across time and space. The "Action Delivery Force" reincarnation is a parody of older anime series seen in the US like Voltron or Robotech. All of the characters are redrawn with an anime aesthetic and to enhance this artistic approach, they're not even drawn by the usual Futurama animation team. The end result is an episode segment that displays a high level of creativity while simultaneously being a loving homage to a number of classic '80s anime. 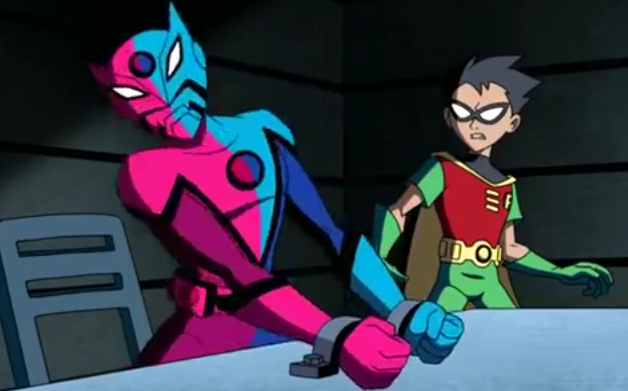 Unlike many other DC Comics animated series, Teen Titans was always very anime influenced; from its art style to its theme song by J-Pop band, Puffy AmiYumi. The feature length, Trouble In Tokyo, which was made after the show’s cancellation, goes beyond the realm of mere influence and right into the land of satire and parody. There are a number of references to Japanese culture alongside specific parodies of Astro Boy, AKIRA, and Spirited Away among others. The change in setting for the show and no longer being tied to the continuity of an episodic format, allowed the creative team to go wild and fully embrace their love of Japanese culture and media. 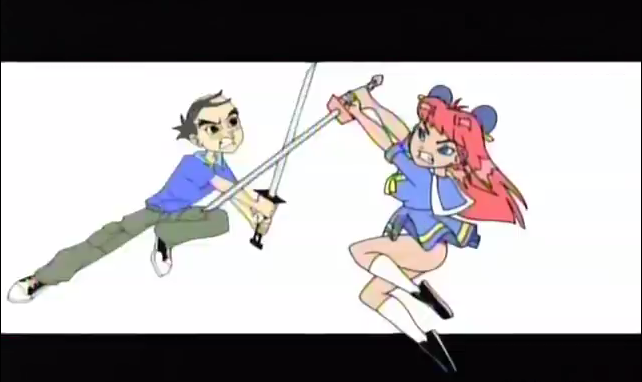 There are no words to accurately describe Perfect Hair Forever. What would you expect if you took the team behind Space Ghost: Coast 2 Coast and Aqua Teen Hunger Force and let them parody anime? You'd expect a zany, inane, non sequitur filled cartoon where the story takes a back seat to the comedy; and that's exactly what you get. The series had a very sporadic run on Cartoon Network's Adult Swim block, but has gained something of a cult status in the years since its initial broadcast in 2004. The throwaway plot involves a prematurely balding boy named Gerald Bald Z in search of a way to obtain perfect hair forever. Seriously, after you’re done reading this you need to look it up online. It's a kind of relentless insanity that's unique to only itself. Enjoy.

5. The Simpsons – Married to the Blob/In Marge We Trust 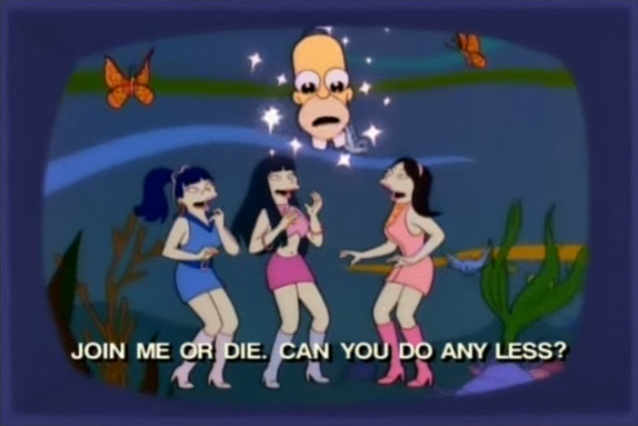 In the 25th season episode of The Simpsons, “Married to the Blob,” a fun little tribute to Studio Ghibli was included in a hallucination Homer experienced after drinking way too much in a Japanese bar. It’s a marvelous amalgamation of references that’s far more heartfelt, charming, and whimsical than it is a parody, but that’s why “In Marge We Trust” is included here too. The B-plot of the episode involves Homer finding a Japanese dish detergent box with his face on it and the brand name, “Mr. Sparkle.” Curious, Homer contacts the company and is sent a video tape all about the fierce cleaning power of "Mr. Sparkle." Though the advertisement Homer gets to watch about is more a parody of Japanese commercials than anime, it’s still a laugh riot to anyone familiar with anime or Japanese television. 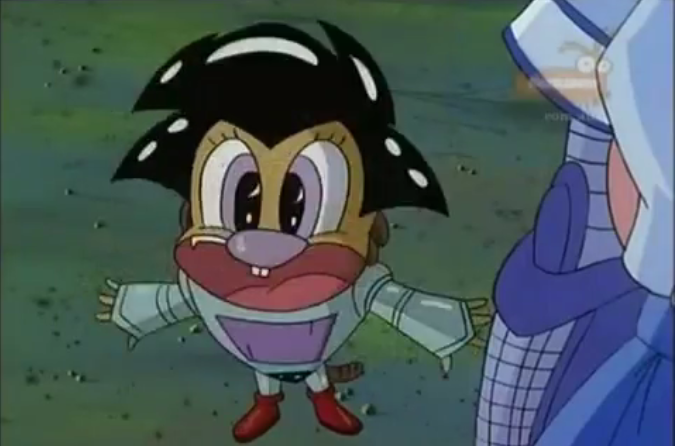 The Angry Beavers was a classic yet oft-forgotten Nickelodeon cartoon that was also one of the cleverest programs the network produced. The series' referential humor ran the gamut from 1940’s monster movies to anime. In the Season 3 episode, “Pass It On,” brothers Norbert and Daggett, accompanied by some of their friends, tell a story that starts with one person before being passed on to the next. As the story drastically changes from person to person, so too does the art style. One section of it becomes a pretty gorgeously drawn anime parody, complete with Astro Boy and Sailor Moon inspired characters. It's complimented even further by a rocking 1980's action anime inspired soundtrack; which is really the icing on this satirical cake. 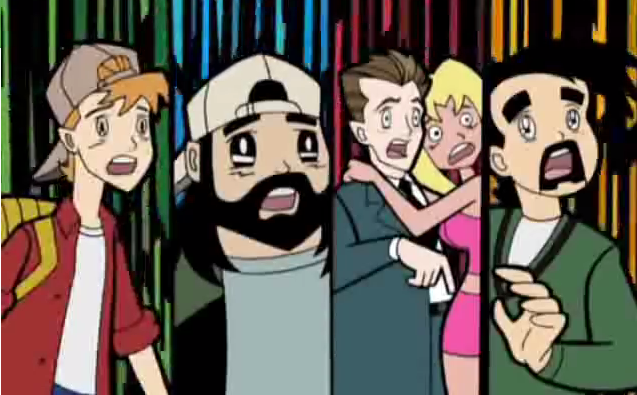 The short lived, animated series of Clerks only had six episodes, but they didn’t waste any time in tearing apart clichés in animation and film. The fourth episode, the official title of which is WAY too long to include here, takes a shot at the show itself and the animation industry in general. Near the episode's end, narration kicks in stating that part of the episode’s script was lost, and the resulting conclusion had to be done through the use of a Korean animation studio, sans script. What follows is just under a minute and a half of almost every stereotypical anime concept you could imagine, and then takes things further by joking about the working conditions of animation studios. Somewhere along the line they also throw in some Beverly Hills Cop and Mission: Impossible references, making this possibly the only time you'll ever see actors Kevin Smith, Judge Reinhold, Eddie Murphy, and Tom Cruise in an anime parody. You'll also never look at bears and cars the same way again... 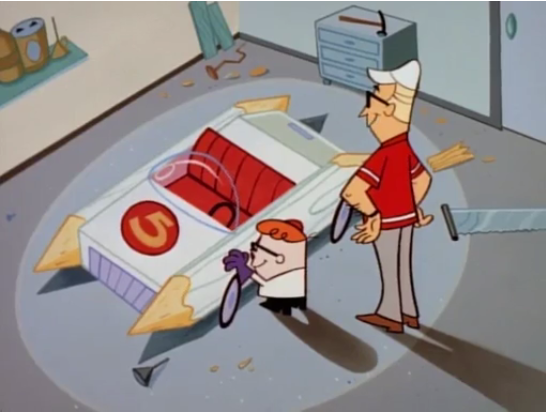 Cartoonist Craig McCracken and friend/collaborator Genndy Tartakovsky, both wear their anime influences on their sleeves. If you've ever seen their work on Powerpuff Girls or especially Tartakovsky’s Samurai Jack, this isn't a surprise. But in season 2 of their popular show Dexter’s Lab, the two went into full on parody territory with the episode “Mock 5.” Fans of Speed Racer should immediately get the joke in the title, given the name of Speed’s car is the “Mach 5.” Sure enough the whole episode is a spot on parody of the show, complete with terrible rushed dialogue, shoddy lip-synching, and the cast assuming the roles of Speed Racer characters. 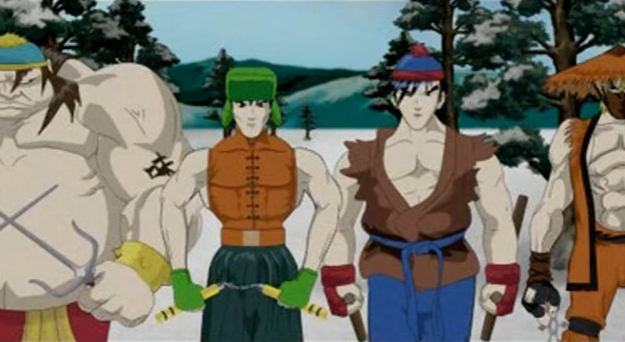 When the boys from South Park get a hold of some 'authentic Eastern weaponry' in the fittingly titled episode, "Good Times With Weapons," their imaginations go wild as they pretend to be super powered ninjas. In order to show what the boys think of themselves, the traditional animation style of the show changes drastically during their adventures, turning into a heavily anime influenced look. The results are pretty hysterical, but things are pushed over the edge by the inclusion of series co-creator Trey Parker singing a Japanese theme song for the episode entitled, “Let’s Fighting Love.” It remains as one of the most memorable experiences in the show's long, storied run, and the greatest anime parody in western animation.