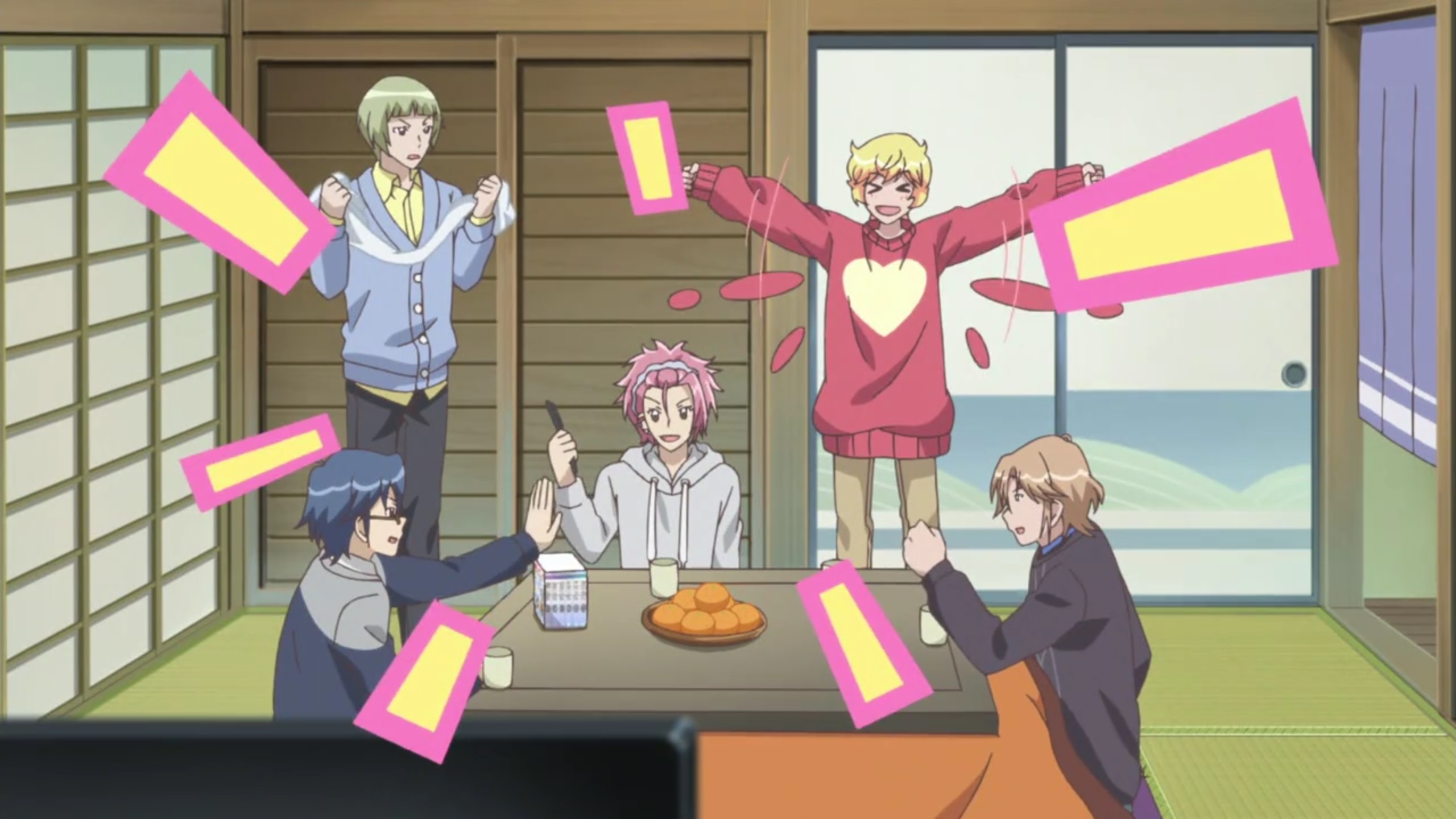 That doesn’t mean it isn’t important, or that it can’t be or at least feel serious. Our high school years shape our ideas, friend groups, and personalities as we muddle through increasingly complex relationships and growing responsibilities, all while battling a torrent of hormones that make us tired or angry or sad or everything at once for no conceivable reason. Even as a teenager, I knew I was blowing my personal and social conflicts out of proportion, that I was going to look back and roll my eyes one day (and sometimes that “one day” was the very next day). But knowing that didn’t stop it from being important.

Growing up is ridiculous. It also matters more than anything. If you can capture that paradox, you’ve pretty much nailed what it’s like to be in high school. And in its second season, Cute High Earth Defense Club LOVE! has done exactly that, and struck stupid comedy gold along the way. 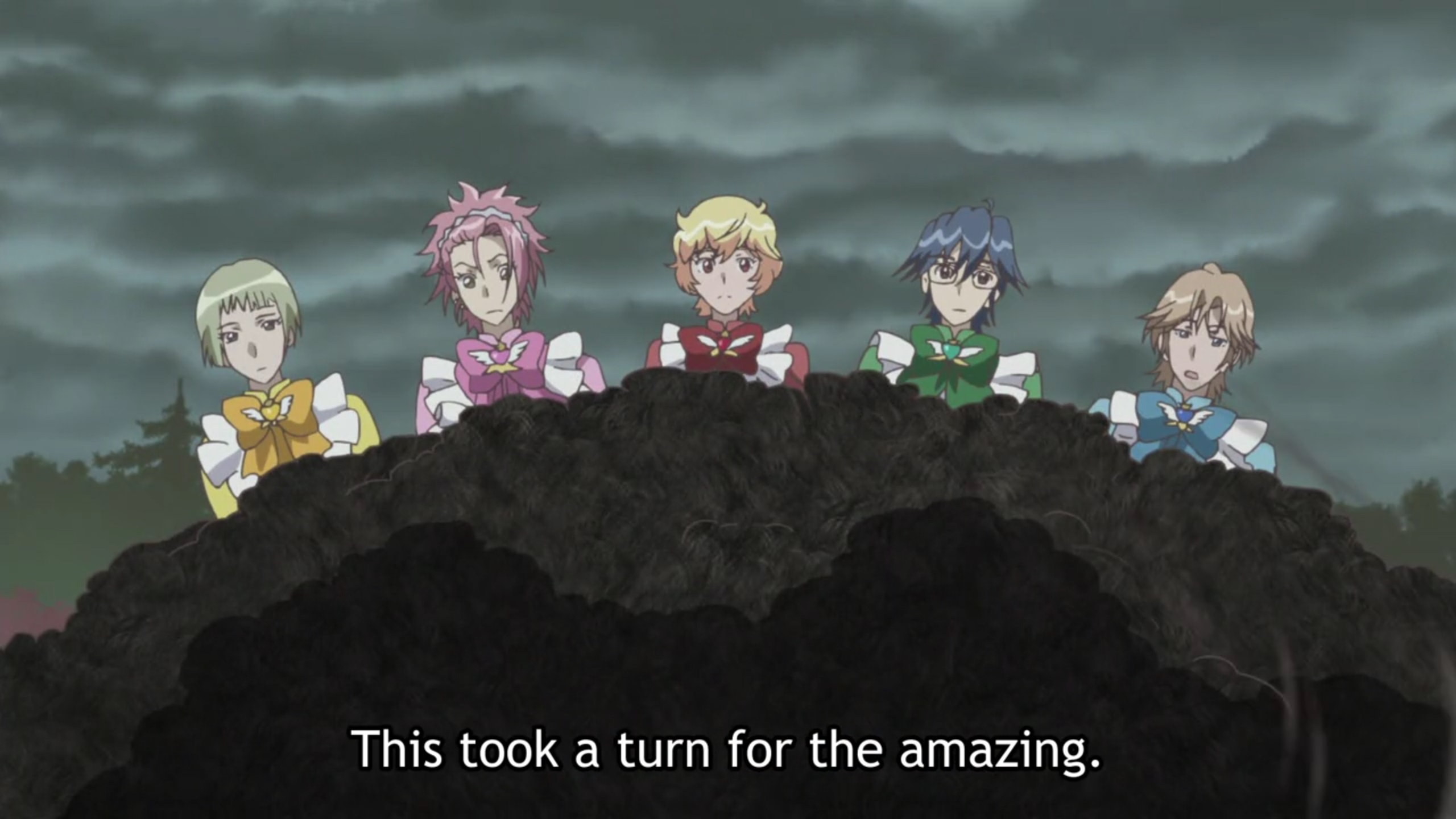 For those who don’t know, Cute High is about a group of high schoolers at an all-boys school who’re members of the “Earth Defense Club (lol),” meaning they loaf around for a couple hours after class, reading manga and having pointless conversations on a variety of subjects - from the best kind of ramen to the mating habits of sea anemone. At least, that’s the plan, but one day a pink wombat shows up and turns them into the “Battle Lovers,” pretty guardians who fight for love and justice.

So, yeah. It’s a show about magical boys. 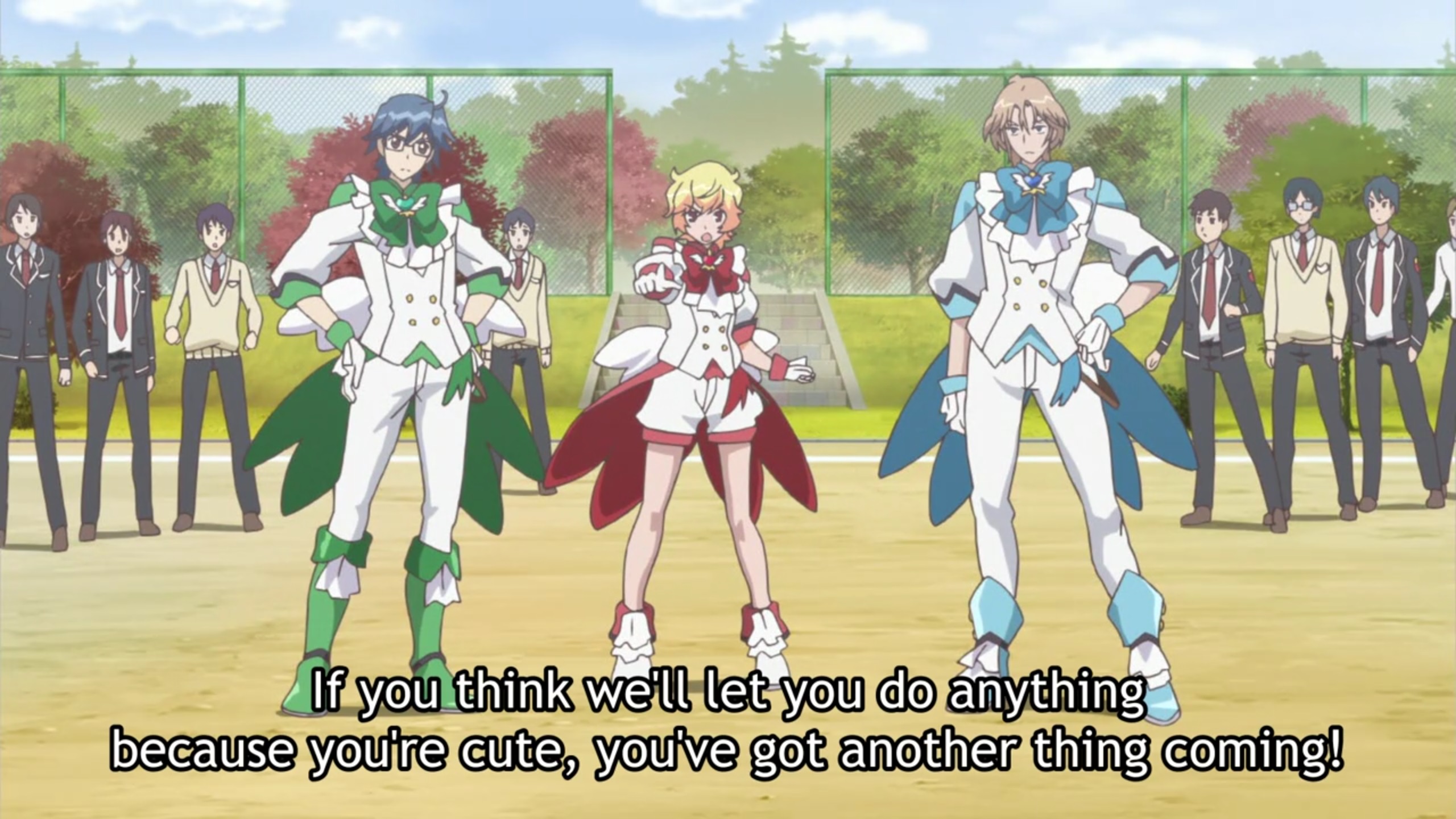 Cute High’s first season established right off the (wom)bat that it was first and foremost a comedy (any show where the heroes transform by shouting “Love Making!” is daring you to take it seriously). It riffed on fanservice-laden “bromance” and “cute girl” series, but primarily served as both a parody and love letter to the magical girl genre, as it poked fun at the genre’s conventions while also embracing its central themes about love, empathy, and redemption. The folks working on Cute High aren’t here to just thumb their noses at other genres; they might tease, but they love what they’re doing, and it shows in every line of their stupid, inspired scripts.

Still, while its first season was solid and featured some moments of outright brilliance (particularly its third episode and magnificent finale), there was always the sense that it never quite knew what kind of show it wanted to be or what central story it wanted to tell. It fluctuated between parody and satire, between smart commentary and dumb shenanigans, without ever settling into a cohesive groove. That tonal inconsistency kept it from being more than a “pretty fun” comedy series.

Now though, in its second season, Cute High has found its comfort zone, running a central thematic thread through its story and gags to create not just consistent comedic excellence, but an at-times pitch-perfect representation (and parody) of the Important Trivialities of high school life. 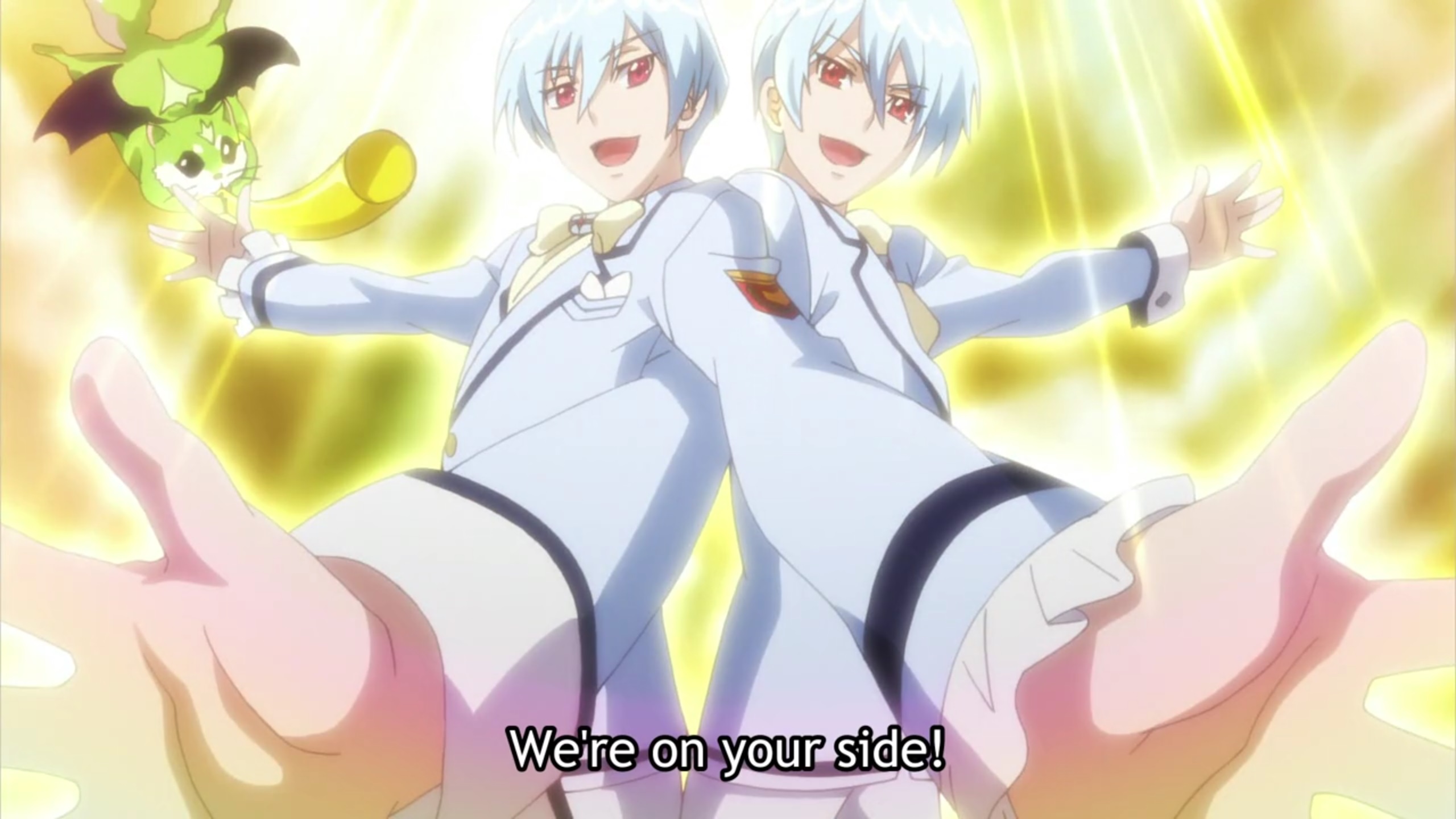 While it’s not immediately apparent, Cute High sets the tone of its second season through its antagonists - a pair of alien idol twins (yes, really) and their talking green flying squirrel (yes, really) who come to Earth to… get Senpai to notice them. And when Senpai doesn’t notice them, they take it out on the people he does notice, finding students with personal hang-ups and turning them into monsters to wreak havoc and take out the Battle Lovers. So basically we’ve got two insecure, increasingly petty teens going around and blowing small problems into massive drama. You know. Those guys.

Our villains are reminiscent of Ail and An from Sailor Moon R (and Cute High happily pays homage to its predecessor this season), but with the added bonus of squirrel-activated monsterfication powers. While Sailor Moon itself was often willing to lean into the inherent silliness of its premise, Cute High cranks that up to 11, taking the negative emotions (or “monsters”) within people and showing how trivial—and sometimes downright obnoxious—they can really be. 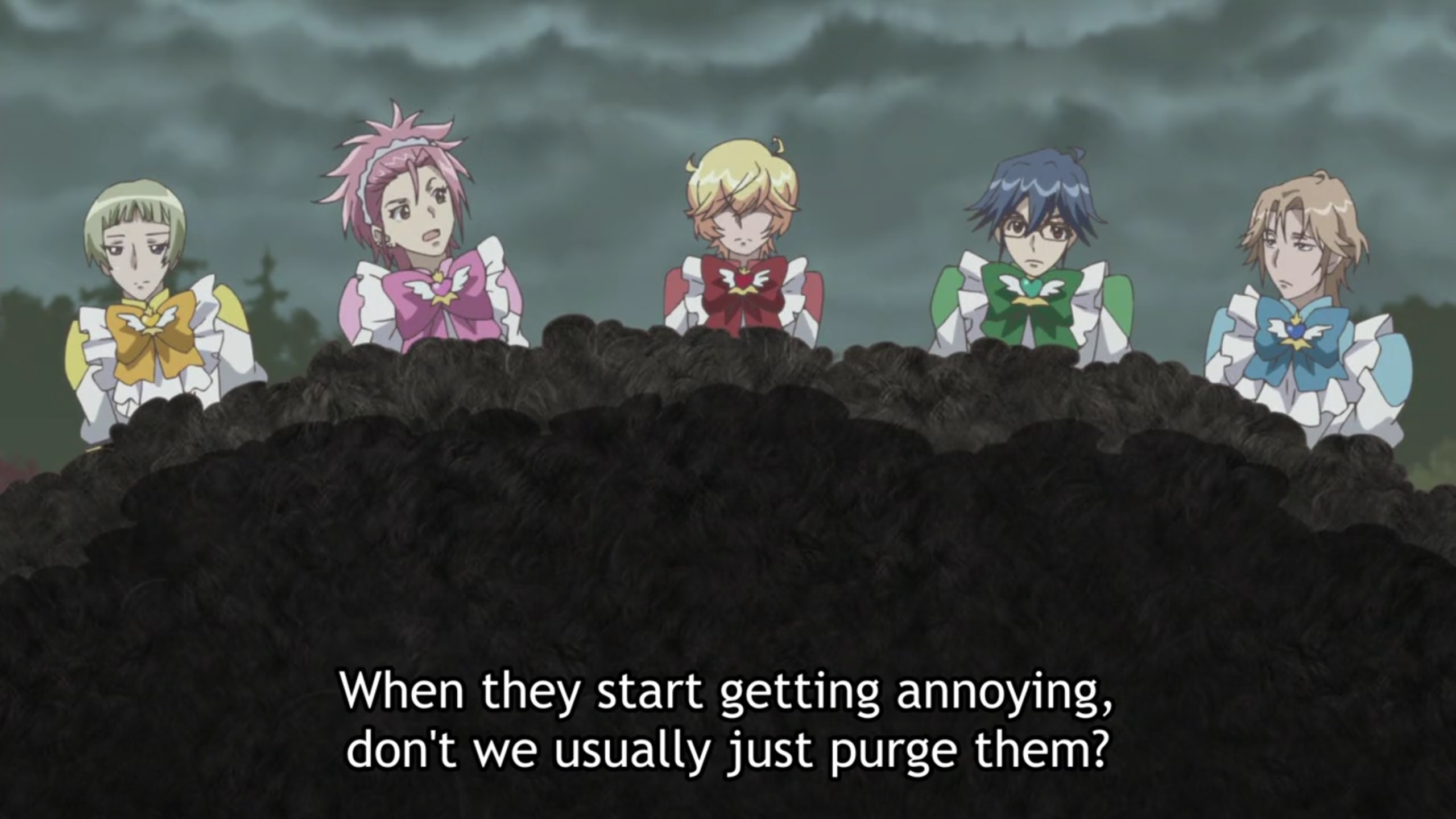 Meanwhile, our heroes are mostly content to slide through high school with low energy and minimal conflict. While they do get caught up in their own hobbies and squabbles from time to time, it never explodes into “monsterfication,” either because they have enough empathy to relate to the other person and work through the conflict, or because they just don’t have the energy to turn it into A Whole Thing.

In fact, with the exception of earnest team leader Yumoto, none of the Battle Lovers are all that gung-ho about this monster-fighting gig in the first place. It’s a responsibility, like homework or a list of chores: something you do because you know it needs doing, but dang, it’s really cutting into your hanging-around time. The gang would much rather chill in the club room or at Yumoto’s bath house, sharing useless information and good-naturedly arguing. Our protagonist’s lives are defined by a series of inane, quasi-philosophical conversations with friends punctuated by intruding responsibilities and bursts of unwelcome melodrama. 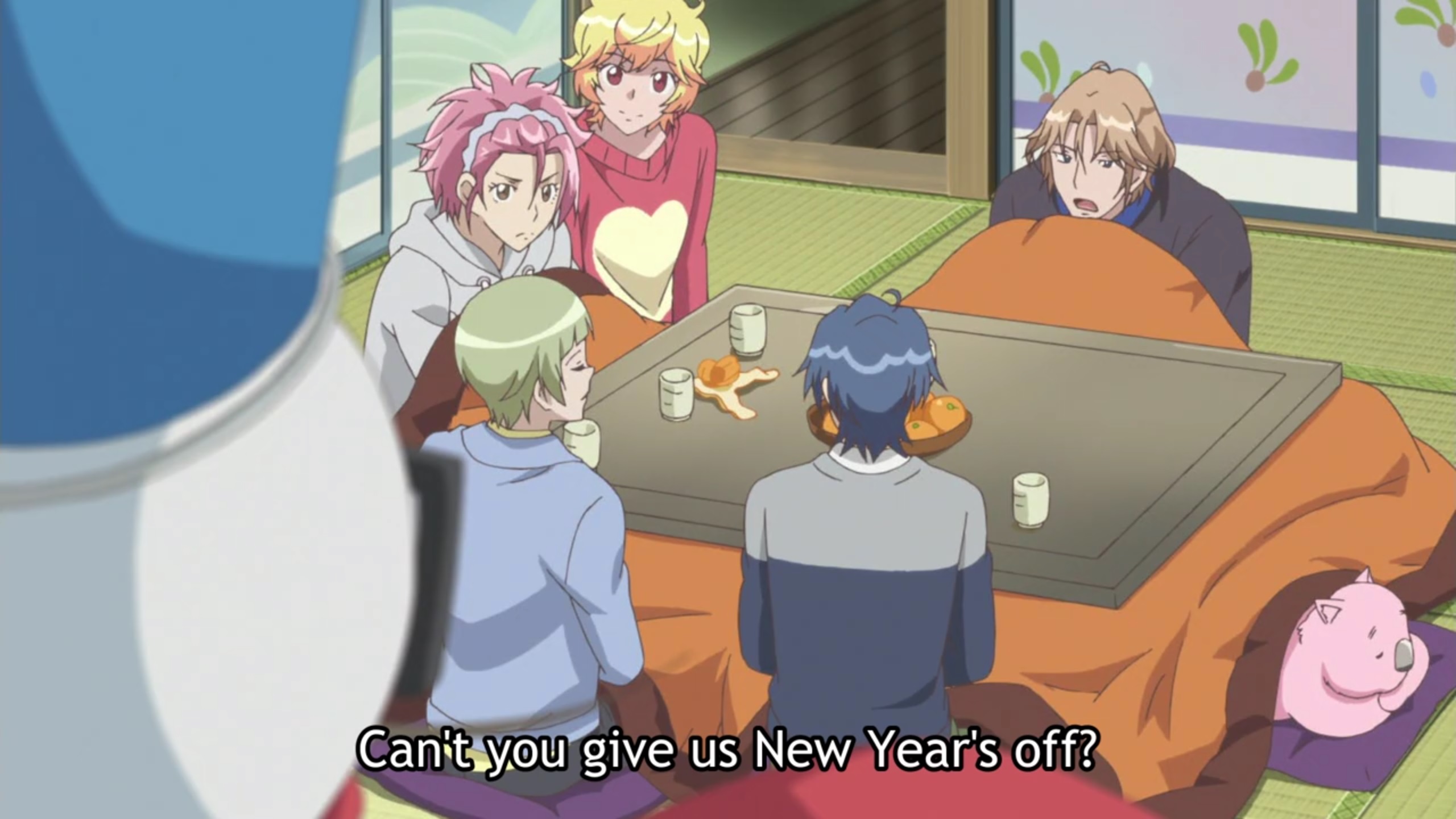 The fight between the Battle Lovers and the drama-generating Beppu Twins is indicative of the way Cute High keeps one foot in reality and one in metaphor, using its magical premise to tackle grounded problems in exaggerated ways - and to hilarious effect. The series mines its comedy from a blend of self-awareness and juxtaposition, allowing many of its characters (and much of its framing and music) to present episodic conflicts with deadly seriousness, all while reminding us with a dry line of dialogue or a silly fight sequence that wait, no, this is actually totally stupid.

You can see this in almost every episode, but I want to focus on “The Synchronicity of Love,” the story of Italian twins who’ve grown estranged from each other. Little brother Alan feels like Bernardo is maturing faster than he is and leaving him behind, but he’s so convinced his brother could “never understand” how he feels that he doesn’t even bother to talk to him about it. Instead, Alan distances himself, leading to a building resentment that our antagonists are able to take advantage of. 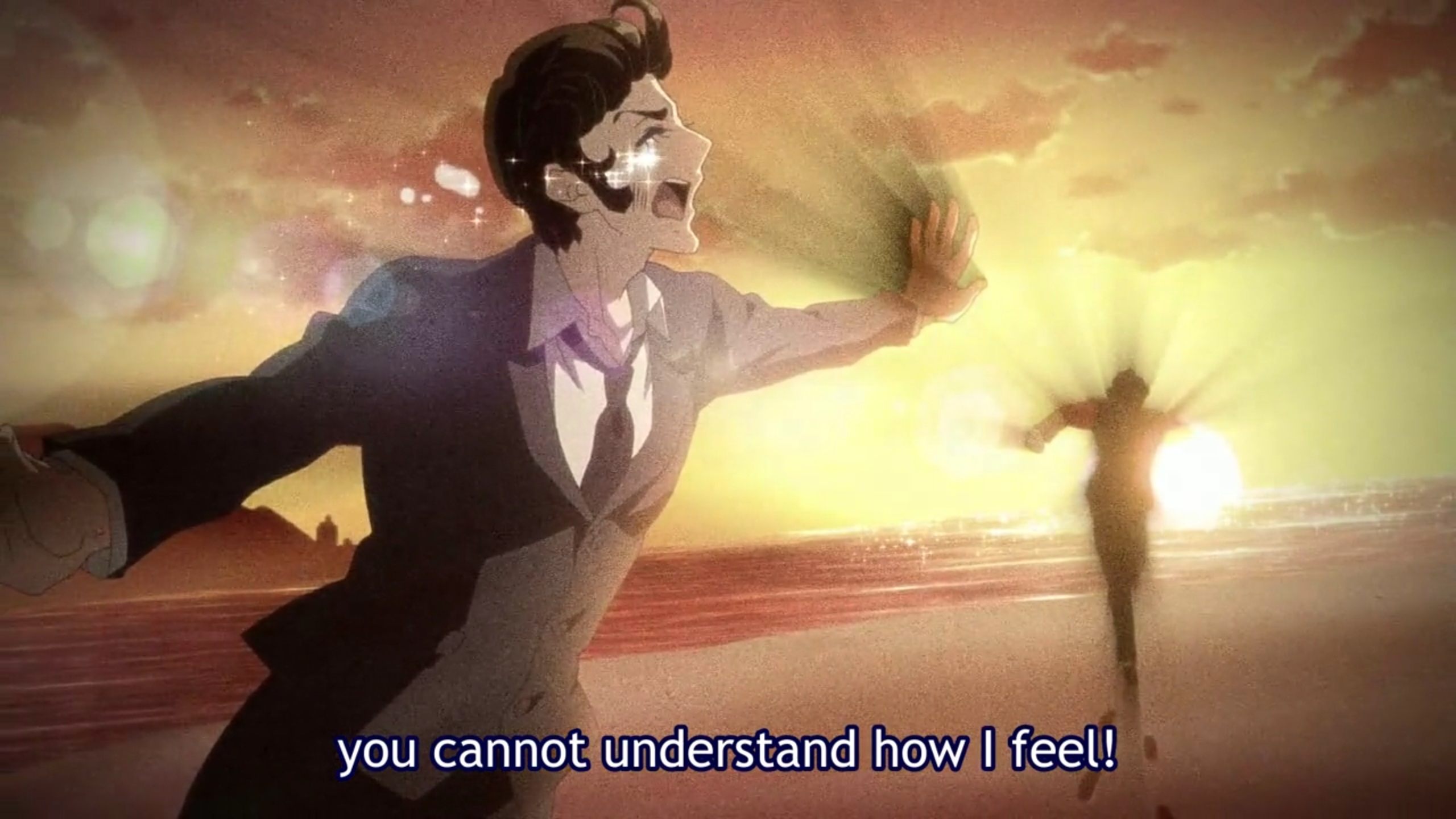 All of which sounds like a sincere emotional arc, and in some ways it is, as the Battle Lovers help the brothers understand one another and reconcile their differences. At heart, all of our weekly people-turned-monsters have real, relatable hang-ups, whether they’re an athlete searching for teammates, a plain kid dreaming of popularity, or a guy with a part-time job who’s bitter of the people who get to party instead of work.

They’re not matters of life and death, but they still matter, and left unaddressed they can build from small annoyances into full-blown fury. Cute High doesn’t deny this, and recently the Battle Lovers have had to rely less on “waving their little sticks around” and more on directly addressing the monster’s hang-up, either through empathy or a tough-love reality check. Yumoto’s able to help our Italian twins in part because he’s felt jealous towards his older brother too.

But this only really tells half the tale, and the other half is where Cute High truly excels. Because even as Alan rages, Bernardo suffers, Yumoto’s moved, and the music SWELLS! with EMOTION!... all of this is happening because of chest hair. 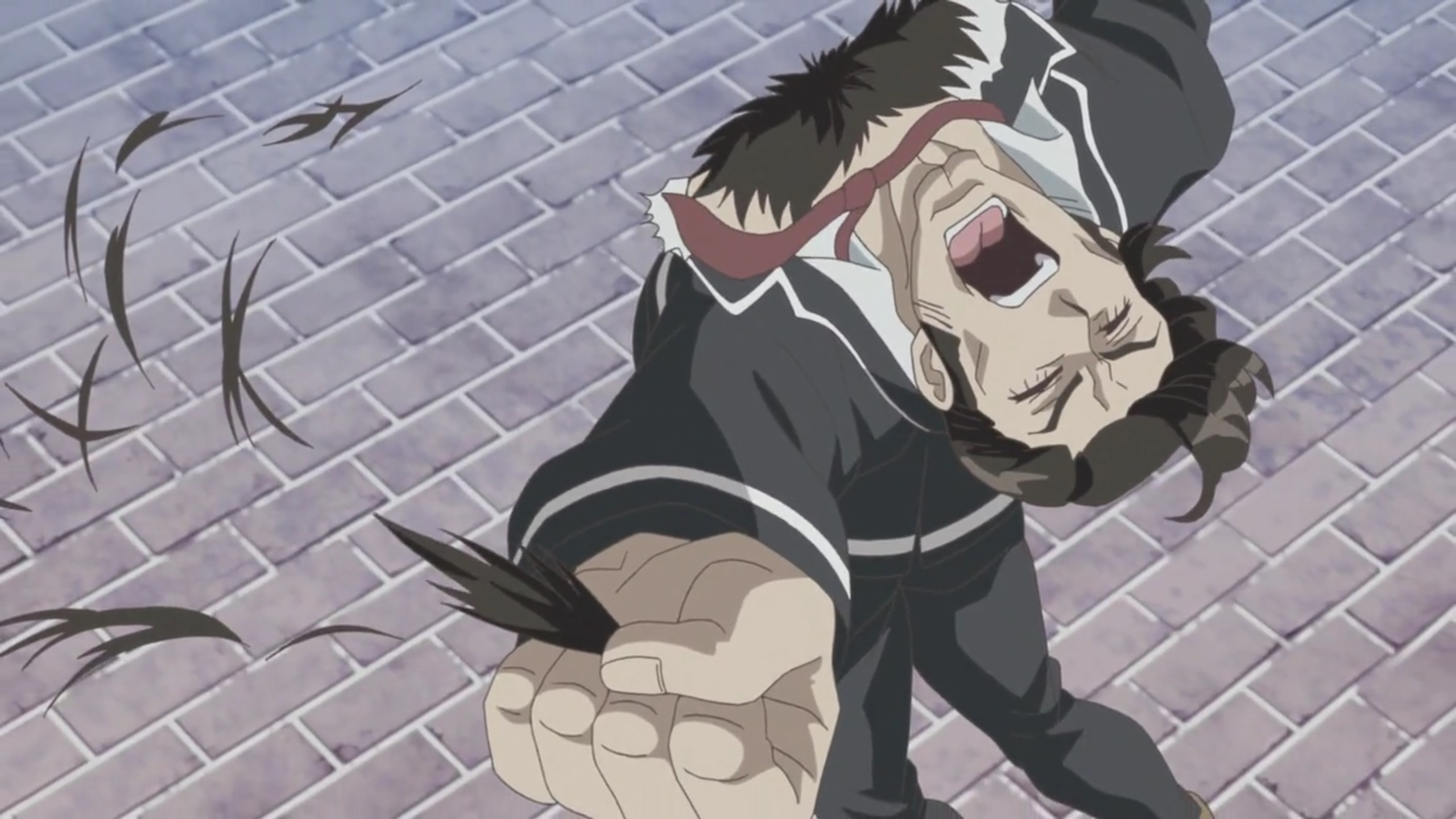 Yes, the rift between the brothers is because Bernardo has chest hair and Alan doesn’t, and what kind of real Italian man doesn’t have proper chest hair?! In true magical girl form, our antagonists turn Alan into the embodiment of his insecurity, and the character designer has an absolute field day: Not only is he a literal chest hair monster, his eyes are a pair of very emotional nipples.

Oh, and Bernardo’s “noble display of brotherly love”? It involves tearing open his shirt and ripping his chest hair out in chunks while screaming about how “THIS IS NOTHING COMPARED TO THE PAIN YOU’VE ENDURED.” Yumoto’s eyes fill with tears at this display of brotherly affection. As for the rest of the Battle Lovers: 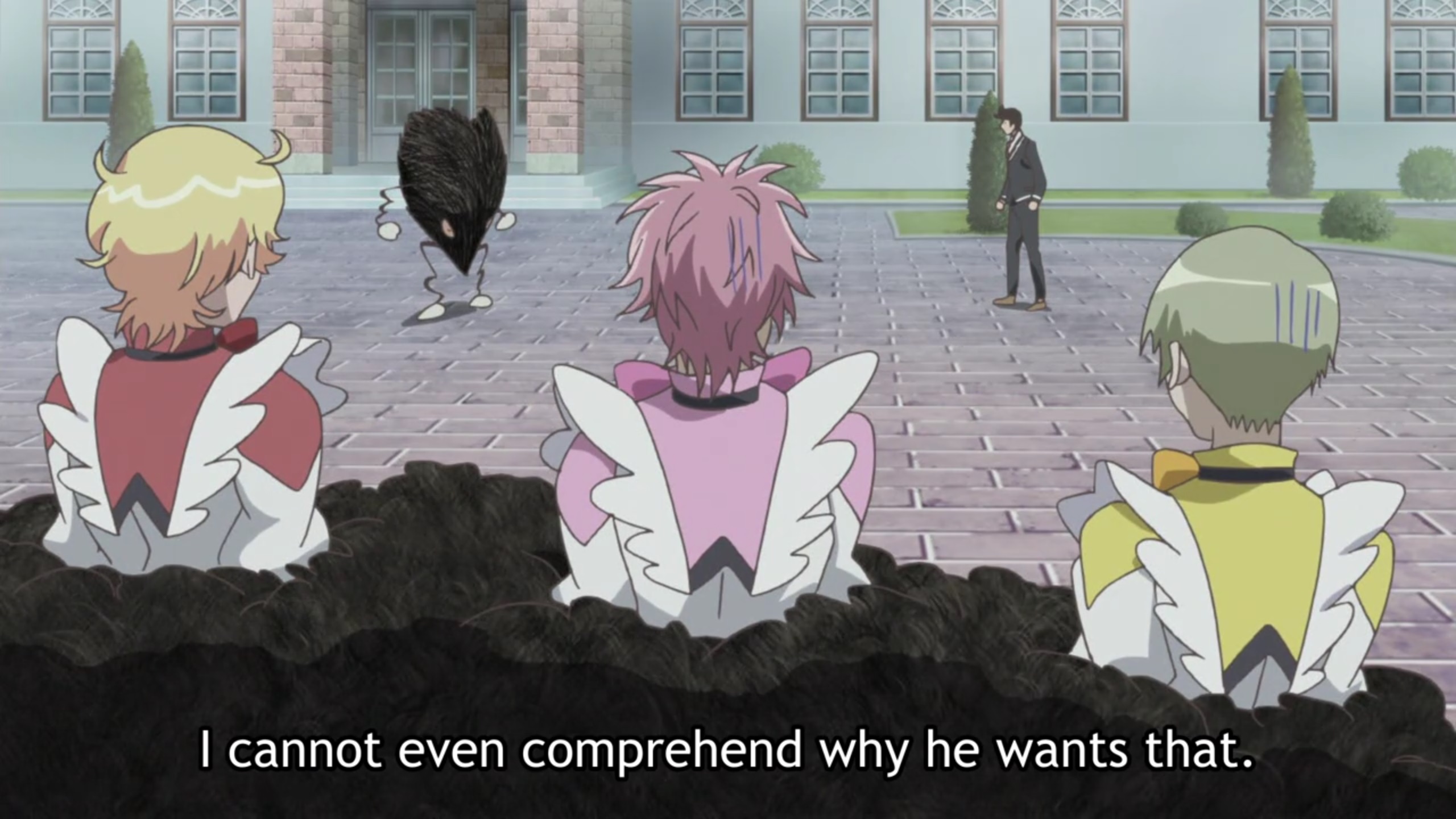 Like so much of the show, it’s a knowingly, gleefully stupid conflict and resolution, balancing straight-faced absurdity with cheeky self-awareness. While Cute High's mockery of anime’s romanticization of high school (one student refuses to graduate until he “lives out his high school dream” of competing in a volleyball tournament, and he’s like 25 by the time we meet him) is a theme that runs through this season, there’s also just enough emotional honesty built in to keep the whole enterprise from devolving into smug cynicism.

Cute High’s second season has successfully married the triviality of its conflicts with the sincerity of its monsters: the understanding that people can get hung up on some truly stupid issues, but that doesn’t mean it isn’t important to them all the same. Granted, none of this is exactly new - the show poked fun at adolescence in its first season too - but it’s more cohesive now, running through each episode with an incisive insightfulness that brings the entire season together.

It’s a silly story about silly boys fighting silly monsters in silly costumes, but it’s also a story about the tension between childhood freedom and adult responsibility, as well as the tension between avoiding conflict and finding ways to work through it. It’s that paradox of silly and sincere, of nothing mattering and everything mattering, that’s not only led to a five-episode streak of hilarity, but also a brilliant depiction of what it’s like to live through (and look back on) high school. 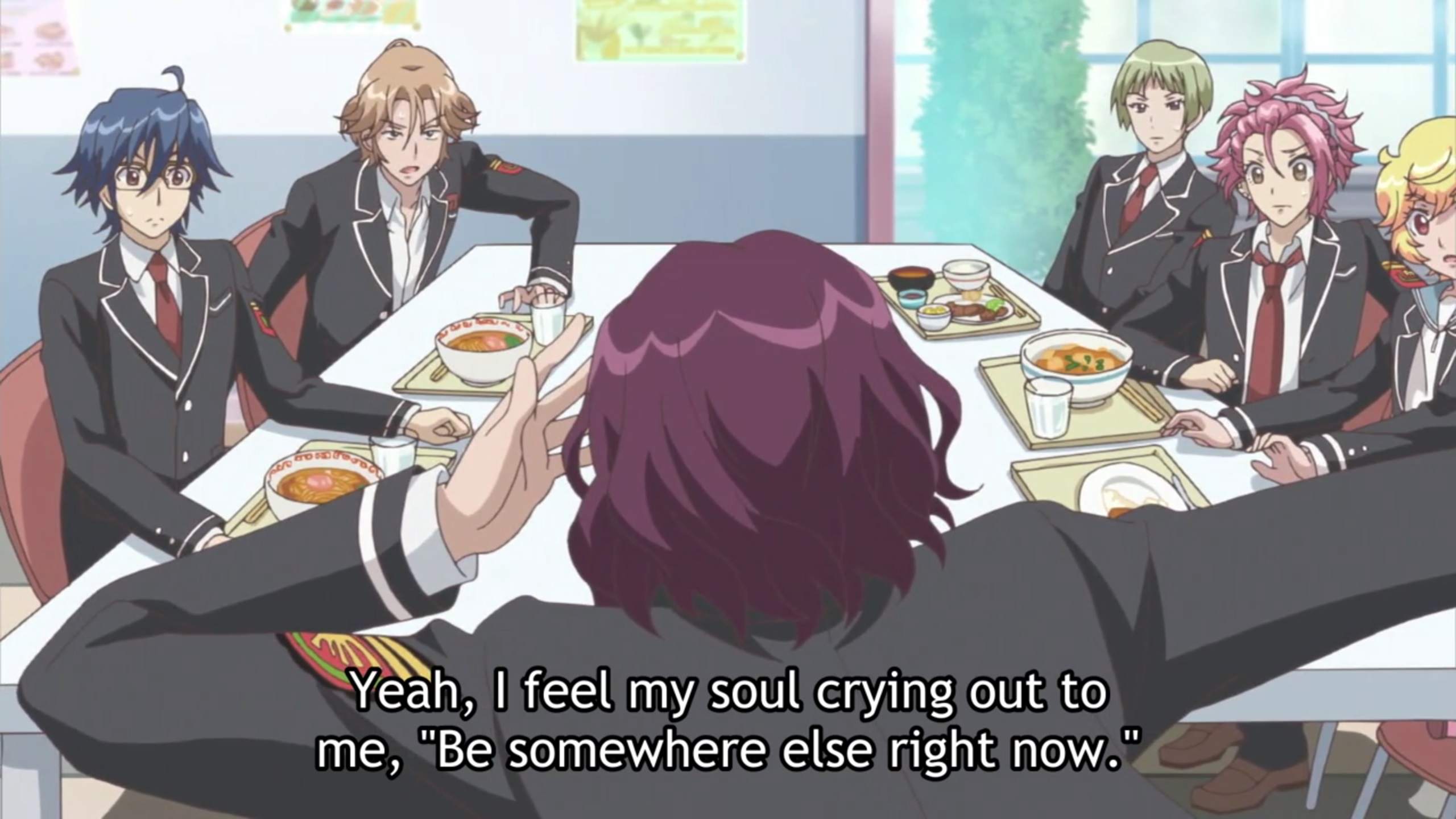 Better still, like any good comedy, Cute High is also a reminder to take a step back from our seemingly important concerns and see if we can find a way to laugh at them, too. Not all problems are trivial, of course, and not all grievances are petty ones. But an awful lot of them are less dire than we build them up to be, and if we can’t find a way to giggle at them, even a little, they might turn into raging chest hair monsters of their own.

Art is subjective and comedy the most subjective of all, so I can’t guarantee that everyone will find Cute High as perfectly dumb as I have, or that its loving irreverence will tickle your funny bone the way it has mine. But if pure, unadulterated goofiness with just a touch of insight sounds like your kind of show, then you might be up for a little “Love Making” with the Earth Defense Club, too. 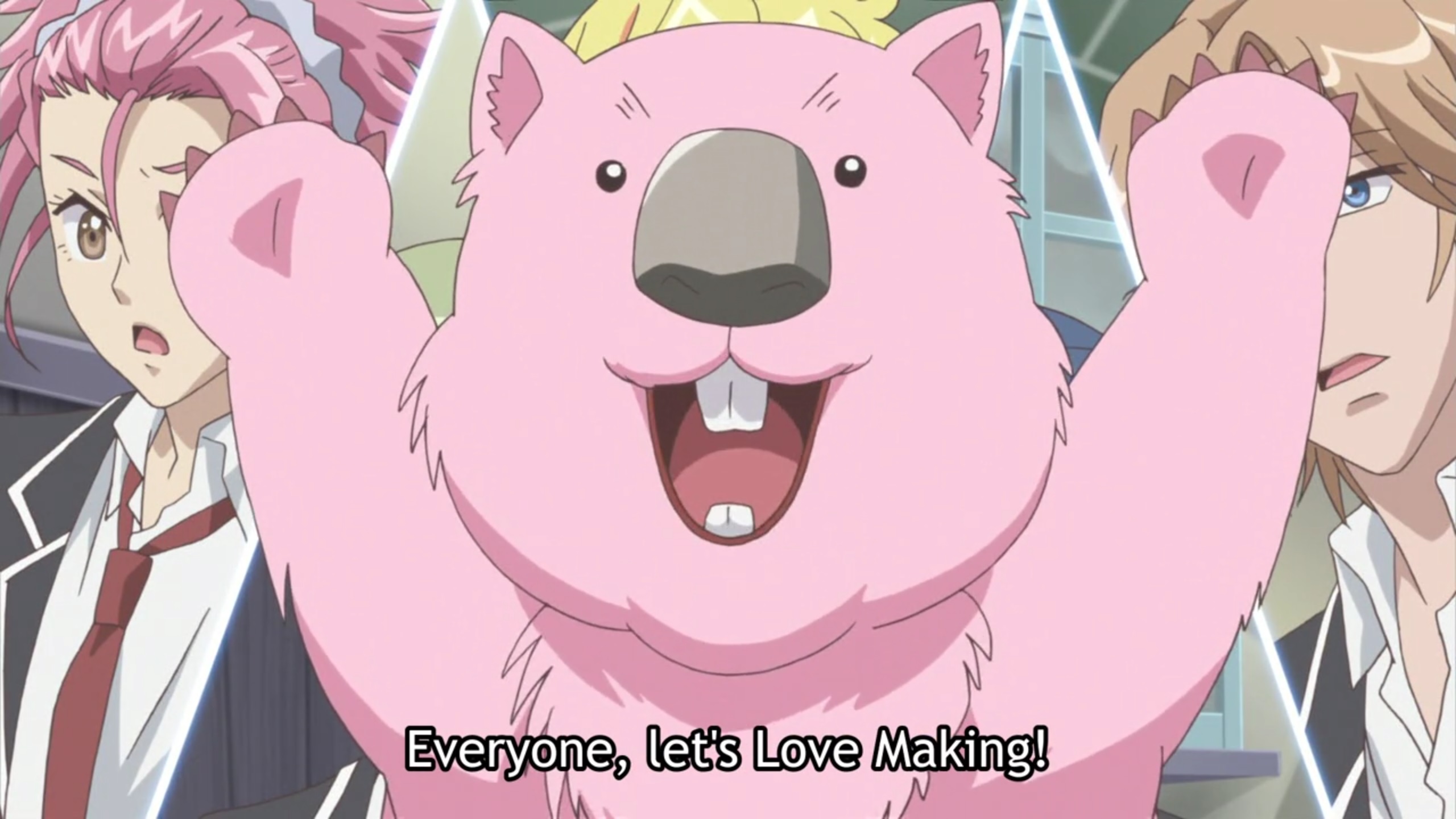