What anime do your favorite anime characters watch? What, you thought you were the only one that got to have all the fun? Fictional characters need their anime too! Here's 10 of the most memorable 'fictional' anime that featured in 'real' anime. 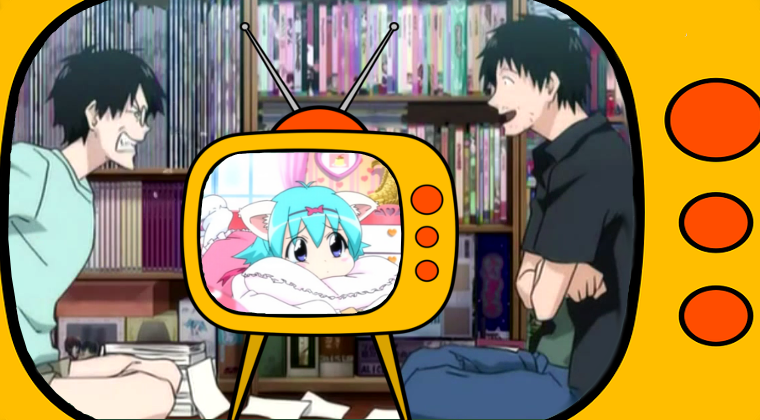 The concept of a "show within a show" has a long history, predating anime by centuries. Ancient epics would often break from the main action for characters to tell separate stories, and Shakespeare made the "play within a play" a central feature of works such as Hamlet and A Midsummer Night's Dream. And so it is today: from Itchy and Scratchy to Inspector Spacetime, our favorite TV characters often have favorite TV shows of their own.

Occasionally, when an anime series is made up for the sake of being watched by characters within either an anime or some other medium, that fake anime series ends up being "defictionalized" and actually produced, at least for an episode if not a whole series. Here's 10 of the most memorable anime that were made up for other series.

Note: This list focuses on anime originally made up to be included within other anime, as opposed to preexisting anime that are later incorporated into the plot of other anime (like how Haruhi is always referenced in Lucky Star or how Digimon Adventure is an anime in the Digimon Tamers universe).

The show: Thousands of years ago, the Super Paleolithic People predicted the Kyo'akk Empire's invasion of Earth... and devised the weapon that would be the planet's savior! Three heroes, Ken Tenku, Joe Umitsubame, and Akira Daichi, now fight to defend the planet using their machines that combine to form the super-robot Gekiganger III!

The source: Martian Successor Nadesico, a comedic mecha anime in which the crew of the Nadesico starship happen to be otaku obsessed with Gekiganger III.

Defictionalized? A 30 minute OVA was released, compiling scenes showcased in Nadesico with some new material.

The source: Genshiken, the anime about an anime club. This is the main anime they watch.

Defictionalized? Twice; first as an OVA (supposed to represent episodes of the "original series"), then as a full blown TV series (supposed to be a remake). Neither is anywhere near as well-liked as Genshiken (7.77 MAL rating for Genshiken vs. 6.40 for the Kujibiki TV show and 6.23 for the OVA), which seems inevitable given the Genshiken characters themselves have mixed feelings about the show.

The show: The solo adventures of Sailor Venus.

The source: Sailor Moon, in which Sailor Venus is a celebrity and receives her own anime series (an opportunity for the Toei animators to poke fun at themselves).

The show: Pururin is, uh, a magical cat-girl? That's also anthropomorphic pudding? With a vacuum cleaner? Or something?

The source: Welcome to the NHK, in which Pururin's late-night timeslot is theorized to be part of a conspiracy to turn otaku into hikkikomori. And its annoyingly catchy theme song JUST KEEPS PLAYING.

Defictionalized? Only in the form of an official website.

The shows: In Exodus (video above), an idol group is accused of the murder of their manager. In The Third Aerial Girls Squad (video below), cute girl fighter pilots are humanity's only hope against alien Builders.

The Third Aerial Girls Squad*
The source: One of the most prominently featured of the anime within the anime of Shirobako, a drama about behind the scenes work at an animation studio.

Defictionalized? Single episodes of both anime were released as specials on the 3rd and 7th volumes of the Shirobako Blu-Ray/DVD releases.

Anime Within Other Media

The show: Aliens have discovered human sports, and as sports fans tend to do, they get a bit too rowdy. Rabbit Force, a team of transforming bunny girls, is in charge of enforcing the laws of civility.

The source: The Japanese live-action TV drama Densha Otoko, about an otaku trying to get a real girlfriend (Mina Tsukuda of Rabbit Force is his 2D waifu).

Defictionalized? This is the second fictional anime on this list to spawn a real full-course TV series, though like the Kujibiki Unbalance series, this one wasn't a hit either, with a 6.45 MAL rating.

The show: I don't even wanna know.

The source: The game series No More Heroes, featuring a potty-mouthed, lightsaber-wielding otaku as its protagonist.

The show: In the year 20X6, Stinkoman goes around space making cool poses with his rocket boots and blue hair. You gotta have blue hair.

The source: The web-cartoon Homestar Runner, originating in a Strong Bad Email segment where the masked wrestler Strong Bad imagines what he'd be like as a Japanese cartoon.

Defictionalized? Stinkoman has appeared in a number of Homestar Runner cartoons and games, though getting Japan to actually give him a full series has not happened yet. The world couldn't handle it.

The show: It's about a princess who's a koala. What more do you need to know?

The source: The cartoon Steven Universe, in which otaku conspiracy theorist Ronaldo assumes snake people (or "sneeple") are responsible for causing subs vs. dubs flame wars on anime message boards.

Defictionalized? Not yet, but we're sure to learn more about it in Ronaldo's upcoming book.