A fair amount of criticism has been lobbed at anime over the years. More specifically, ire is focused at anime and manga artists’ portrayal of women. At the risk of drawing a vast amount of hate mail, here’s a truth statement: most of those criticisms are correct. One only need look at the heavy amount of research connecting unrealistic portrayals of women in media and body-image issues among young girls and women to say, yes, something is amiss. Most notably, the rates of eating disorders and overall body image dissatisfaction have risen alongside the increase in access to media sources, including social media.

It’s a bit of a stretch, of course, to say that anime is single-handedly, or even largely responsible for body image issues among young women and girls. And it’s a step too far to say that anime is anti-female, or simply some self-congratulatory work of machismo among an overly-sexualized, predominately male cadre of artists and animators. While it’s true that many skilled individuals slaving away in the dark rooms of Japan’s anime industry are historically male, what is also true is that the core audience for anime/manga has become much more gender-balanced. Indeed, as of at least 2015, nearly half of all anime convention attendees were women. Whether that is because far more women are interested in the medium, or because their otaku boyfriends are dragging them to conventions, is anyone’s guess. Without question, however, is the fact that females make up a significantly large chunk of the anime-watching, manga-reading audience.

So What Are We Missing? 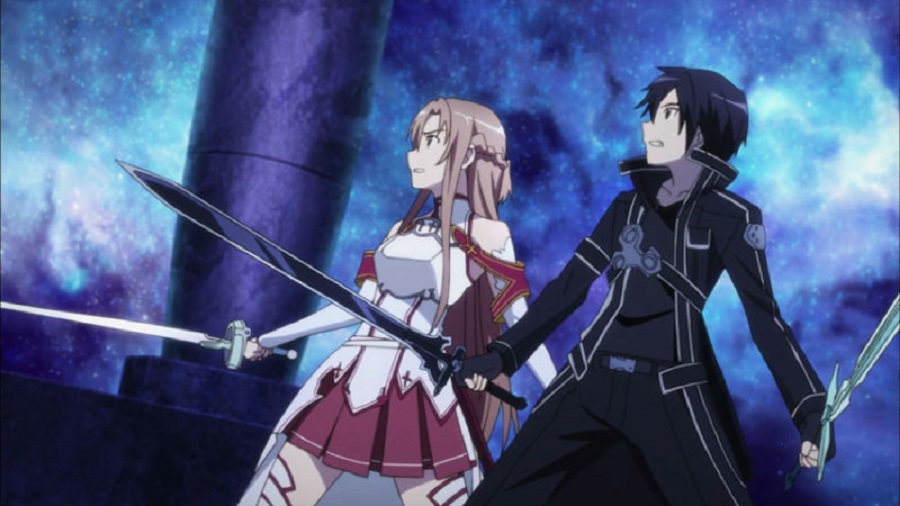 Are these female anime fans simply self-hating women, defending highly-fantasized, oft-unrealistic versions of their own gender? Is it some sick, tertiary form of Stockholm syndrome, wherein they’ve sided with the animators due to a twisted addiction? Or, alternatively, could all of the naysayers be missing something fundamentally important about the industry. Could it be that the way women are drawn in anime is more window dressing than anything else?

One could certainly make an argument (and some have) that the way female anime characters are drawn is its own art form. Others will argue that it’s simply good marketing, “fan-service”, if you will, to help bring in audiences and sell DVDs. Ultimately, however, we’re not here to argue whether the way females are drawn in anime is good, bad, or ugly (never that). What we’re looking at is whether the feminist admonishment of anime is entirely fair on all ends.

This is where the Bechdel test comes into play. Far from a scientific test, the Bechdel test is more of a conversation starter than anything else. First appearing in a 1985 comic, the test is rather simple. In order to pass the test, a piece of media (originally movies) must meet all of the following criteria:


1. The movie has to have at least two women in it,
2. who talk to each other,
3. about something besides a man.

The test has since been modified in several different ways, but has more-or-less kept the same criteria. The user-populated database at the Bechdel Test Movie List website has perhaps the largest record of movies and other media pitted against the Bechdel standard. The website made the addition that the female characters had to be named, but otherwise kept the test the same. Overall, around 58% of the movies in their database pass the test.

Given the many criticisms of anime, it's important that anime falls under the Bechdel microsope. After all, anime is serious business. As much as it often provides somewhat mindless entertainment, many of the best anime equally delve into the philosophical and spiritual. It’s good to examine the genre through multiple cultural lenses, and form interesting discussions about that which consumes so much of our time.

Creating an entire database of whether every anime in the MyAnimeList database passes or fails the test would be a Herculean effort. Instead, we’ll take a foray into the top 5 anime in the database: Gintama°, Fullmetal Alchemist: Brotherhood, Steins;Gate, Hunter x Hunter, and Ginga Eiyuu Densetsu. Although other iterations of Gintama appeared higher on the list than Hunter x Hunter and Ginga Eiyuu Densetsu, only the first was kept in order to cast a wider net.

Weighing any serial show against the Bechdel test’s criteria is a admittedly a bit difficult. After all, it’s certainly possible for a single, or multiple episodes to pass the test, while others do not. For the sake of science, we’re looking at the first several episodes of each show, ending our test the moment we see whether the anime passes, and declaring a tentative “fail” if the anime fails to meet the criteria by the 6th episode (roughly half a cour). Again, this is neither scientific, nor wholly accurate. It is, however, a good starting point for discussion, which we will get into closer to the end. 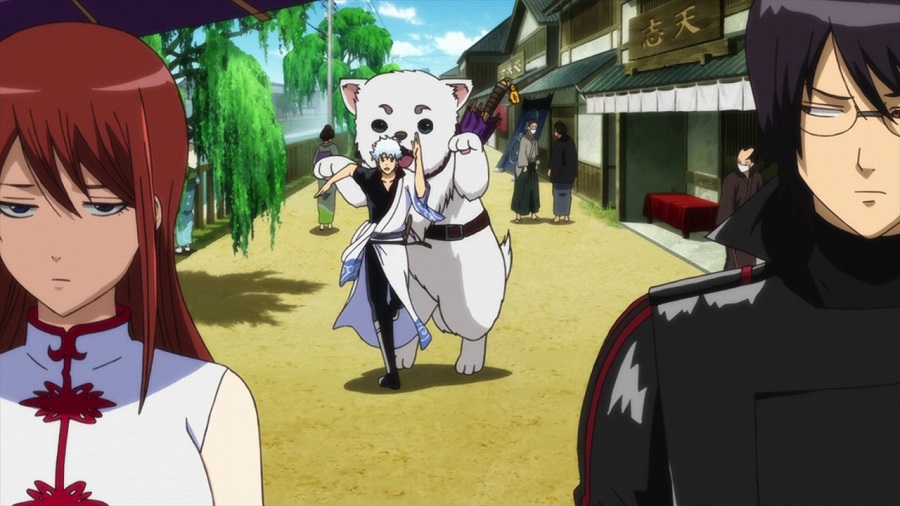 It took Gintama 6 episodes to pass the test. Despite having several named female characters as leads, the anime finally passed at the end of episode 6 when two minor characters (both named) had a small exchange of words. There was one other possible instance in the first episode of the series that was not counted, as it did not involve active dialogue. It instead involved one female character (Kagura) talking to another female character, but not in a back and forth manner. 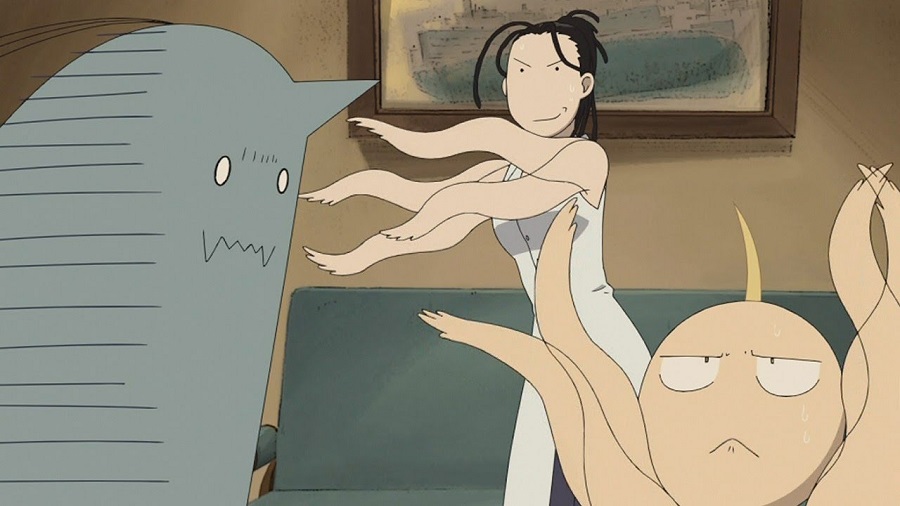 Despite the series' obvious focus on the relationship between the two brothers, Fullmetal Alchemist: Brotherhood wastes no time in giving its female characters prominent--and worthwhile--dialogue. In episode 2, Winry and Lt. Riza engage in a conversation that covers two key topics. One is Winry’s disapproval of the military. The other involves, yes, talking about Edward and Al. However, the conversation has nothing to do with romance, but in Winry fearing the loss of her two friends. It’s hard to imagine anyone arguing that this scene fails to pass the Bechdel test. 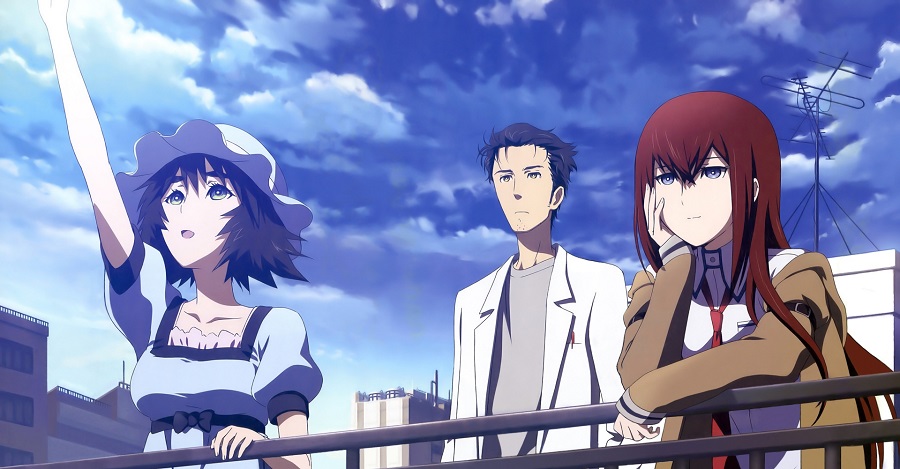 Despite featuring the main character so heavily in practically every scene, Steins;Gate passes the Bechdel test by the second episode. However, here we might get some serious disagreement. Partially into the second episode, Rintarou walks up on Luka and Mayuri mid-conversation. Luka is practicing sword swings, while Mayuri is shouting encouragement. Here’s the real kicker. While technically a “male” in this episode, fans of the show will note (spoiler alert) that Luka is highly effeminate, and secretly wishes to be a girl. Later in the series, D-Mail activities that we won't dive into involving some serious timeline altering, Luka is changed into a girl for the remainder of the series. So, to be fair to modern gender equality, Luka is what she wants to be: a girl. As such, Steins;Gate passes the Bechdel test in the second episode 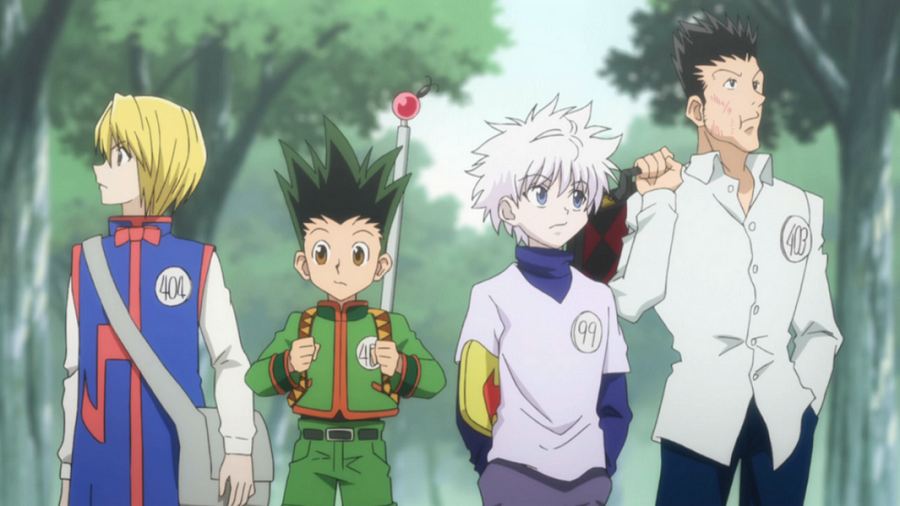 Hunter x Hunter almost amusingly fails the Bechdel test. The anime not only lacks female characters leads, but rarely has female characters doing much speaking at all during the first several episodes. While it is certainly possible that the anime has more than a few episodes where female characters are engaged in conversations that do not involve discussion about men in any way, the overall plot and character setup for the series make this a rarity, at best. 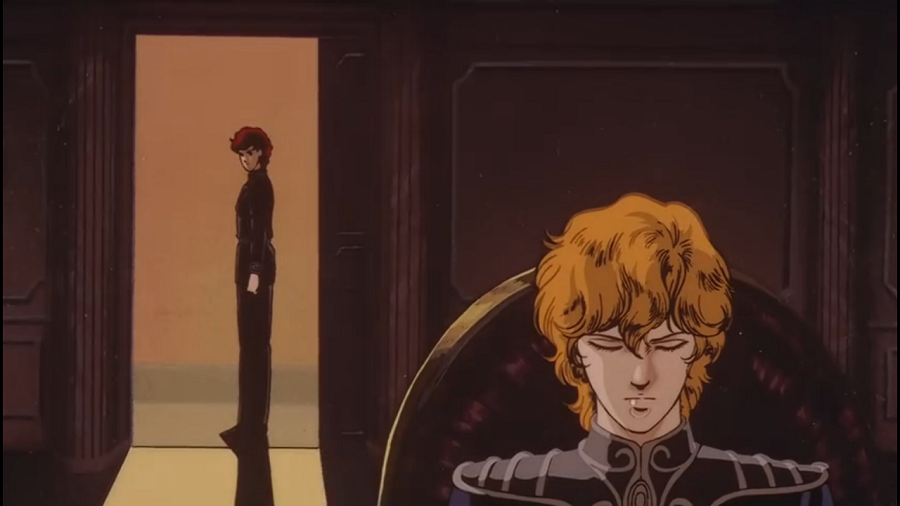 Ginga Eiyuu Densetsu was given as fair a shake as one could hope for in passing the Bechdel test. It failed, miserably. In fact, the only female (at least, within the first several episodes) that even had a significant speaking role and screen time was Reinhard’s sister. Even then, her conversations with just about anyone else, male or female, were always about her brother. 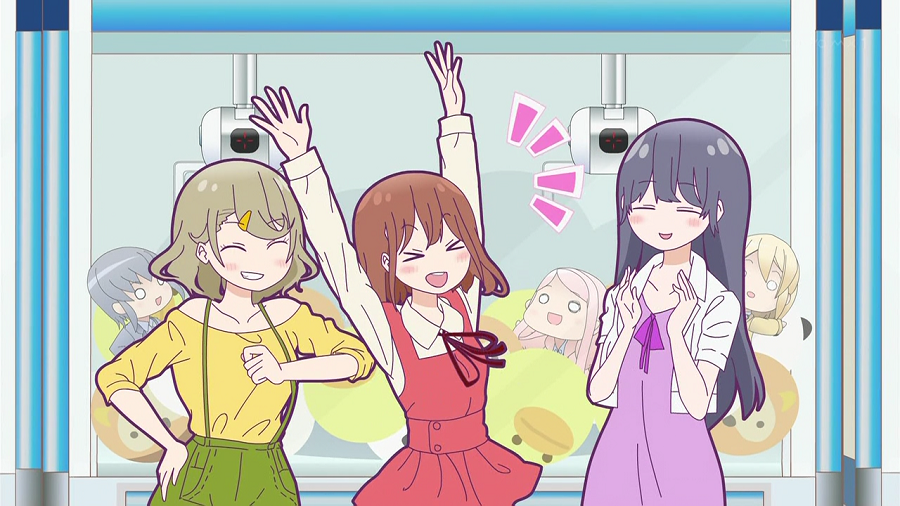 The Bechdel test is a far cry from a scientific measuring stick. However, it is an interesting dowsing rod that allow us to capture the pulse of culture, and how it changes over time. Note, for example, that the only two series that failed the test are also the oldest. Noticeable changes in the incorporation of primary female characters have been noted by many who have used the Bechdel test on older and newer forms of media.

What the test does not measure, however, is the impact an audience has on what is created. Most forms of media are hand crafted for the audience that consumes them. Anime in particular has been heavily male-dominated, both on the production side and the audience side. In the past decade this characteristic of the industry has shifted rather dramatically. Increasingly, more females are adopting anime as a favored pastime. More and more female artists and animators are also choosing the anime industry as their industry of choice.

Anime is beholden to its audience just as much as any other industry. While it’s certainly nice to assume that all artists, regardless of the genre, are, or should be, harbingers of cultural change, this is an expectation grounded in unrealistic idealism. Gender equality in anime, and in all media, follows its host culture and its fanbase. As newer anime are produced, we see female characters take on more prominent roles for the same reason we see shifts in women’s roles within society. The idea that “life imitates art” is true--to a point. But anime is based on consumerism. Consumerism follows the desires of the audience. 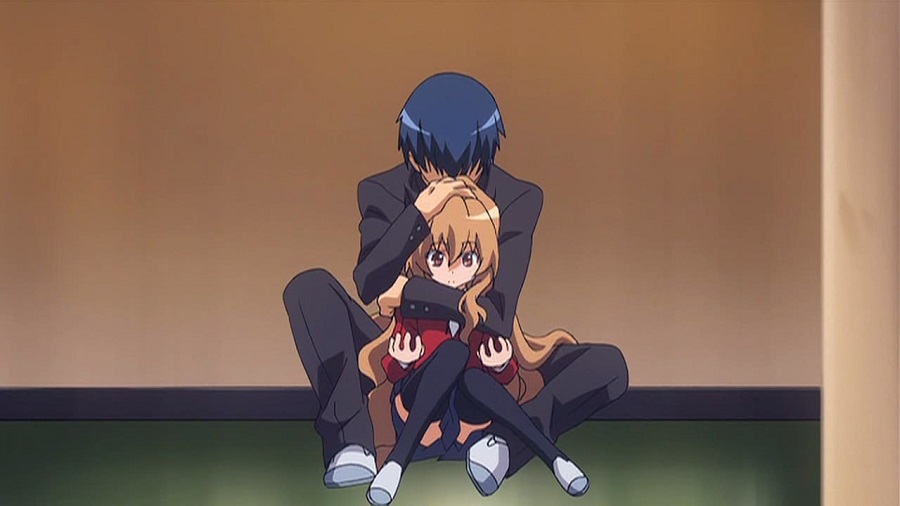 This is why we see less sexualized fan service in older anime, but much more of it in newer productions. Animators give audiences what they want. New animators entering the industry, who were fans themselves, are heavily influenced by their own generation’s wants and desires and bring that with them to the drawing table.

The Bechdel test is great as a conversation starter. It can also help us identify both dramatic and subtle cultural shifts when it comes to media and gender. It should not, however, be used as a means of outright condemning a for-profit form of entertainment media. Audiences have their likes and their dislikes, their wants and desires. Similarly, media companies have an obligation to their staff and themselves to make a living. The morality of that choice is a topic for another day, however.

While the Bechdel test ultimately vindicates most modern anime, anime need not rely on such a test for vindication. With such a wide array of options from hundreds of studios, there are, and will continue to be, anime that prominently feature female characters with a women’s empowerment angle. Likewise, there will continue to be anime that are as male-centric as one can regretfully imagine.

Eventually, we have to learn to deal with the fact that, outside of ourselves, there are people who want their entertainment to reflect something different than what we would prefer. That's just life.