Concrete Revolutio and the Phantasmagoria of Heroism and Justice

This BONES project directed by Shou Aikawa that initially left viewers dazed and confused has recently come to a thundering conclusion. Behind the barrage of sparkly colors and references to mid 20th-century history and pop culture, what was the point of it all? 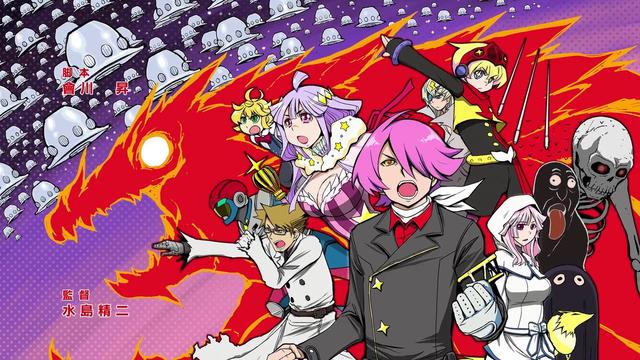 Concrete Revolutio is an overstuffed and often quite obtuse series, and it isn't all that hard to understand the perspective of everyone that dropped it for seeming like a muddled disaster. I myself, alongside many of the people that now consider themselves a fan - likely agreed with those people after the first episode had premiered and took us all off guard with a non-linear timeline and a script that struggled between introducing its characters and foreshadowing future events.

Every episode thereafter was far easier to understand as a result the audience slowly getting used to the bizarre narrative style, setting, and overall improvement with regards to pacing. The story nevertheless, remains chaotic until the very end and will certainly test attention spans and memory each week.

Despite this, the various thematic voices at play here were easier to parse than I could've imagined. Attempting to sum everything Shou Aikawa and his team of guest writers was getting at in one post is a nigh impossible endeavor (the ways in which it references and criticizes uncomfortable/controversial aspects of Japanese and American history via storytelling parallels is something worth covering by someone more well-versed in such topics than I am), but I can try to get at the heart of it at least.

To give you a primer, the setting we're dealing with here essentially mirrors that of Japan in the 1960s and 70s except with many historical events being given a big supernatural twist. In it are all sorts of supernatural entities mixed about, from superhumans to kaiju, to cyborgs (and to a lesser extent; aliens, time travelers, etc).

Within a world where superhumans are commonplace, a government sanctioned agency known as the Superhuman Bureau exists to both regulate and protect these supernatural entities from injustice so as to maintain good relations between them and regular individuals. The conflict of Concrete Revolutio is between superhumans (and humans, and beings of other species that support them) attempting pursue their own sense of justice, and a conservative regime that has no problem limiting checks and balances so as to restrict and manipulate them as tools of war. Justice is an unclear and highly personal subject, but evil is a bit easier to discern. It can be found in the form of entities with no grander motives than to inflate their wealth and influence, even if it means instigating conflict between well-meaning individuals to meet such ends.

At first, what seems like a series of messy, disconnected trains of thought eventually brings together seemingly disparate characters and story beats into an analytical diatribe against the idea of a single perfect unclouded justice. The main vehicle for this idea is our main character, Jiro Hitoyoshi, a young man that joined the Superhuman Bureau so he could work for an institution that represents perfect, uncorrupt justice and upholds the rights of superhumans. Unfortunately, the Superhuman Bureau slowly reveals itself to be considerably less than the infallible paragon of justice it initially seemed to be. The Bureau's support of a government that is inherently against the idea of superhuman freedoms leads to compromises being made that make the Bureau come off as hypocritical. The very first episode establishes that eventually both he and the Bureau would go their separate ways. The rest of the 1st season essentially works towards that very conclusion, detailing how many scrapes his tenuous relationship with the Bureau could endure until reaching a breaking point.

It would be forgivable to assume from the outset that Jiro's quest for the perfect justice against all odds would make him the infallible, underdog of a hero, but the series would then take every possible avenue to prove you wrong. The problem with Jiro is that, whilst he has a rather reasonable understanding of basic morality, he doesn't seem to have any idea of how his idea of justice ought to manifest its way across society as a whole. He can only respond to injustice in individual cases of it, but has little idea of how to deal with the underlying, systemic factors that allow said injustices to exist in the first place. All he can do is occasionally obstruct the Superhuman Bureau in his search for a meaningful alternative. 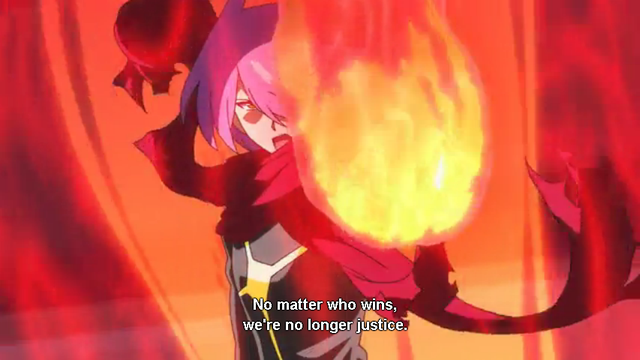 Towards the end of Season 1 (not long before Jiro goes rogue) we are introduced to another rebel fighting for the rights of Superhumans known as Phantom Sword Claude. The approach Claude has to changing the world is what might seem like the logical conclusion to Jiro's own dilemma. That is, a massive and violent upheaval relying on the involvement of everyday youth. To prevent the rights of superhumans from being trampled, it is necessary for the superhumans to trample the rights of their oppressors fiercely and fast. Whilst both Jiro and Claude uphold the same basic idea that superhumans deserve better, the potential catastrophe that could result from such an uncompromising approach to justice outweighs the tenuous promise of "maybe one day we'll achieve peace and understanding".

Jiro childishly yearns to be a different sort of hero, one that will never have to make sacrifices, and Concrete Revolutio punishes this way of thinking. When his former Bureau companion, the ghost Fuurouta, finally comes to grips with the reality of having killed a species of kaiju, he laments his childish ignorance towards the suffering he has caused. Jiro then assures him that there is no need for him to grow up as he doesn't want the kid in Fuurouta to be tainted with the same cynicism that he himself struggles to deal with. Jiro sees in Fuurouta something pure: the same kind of wide-eyed child that hasn't given up on the ideal of comic-book style heroism. 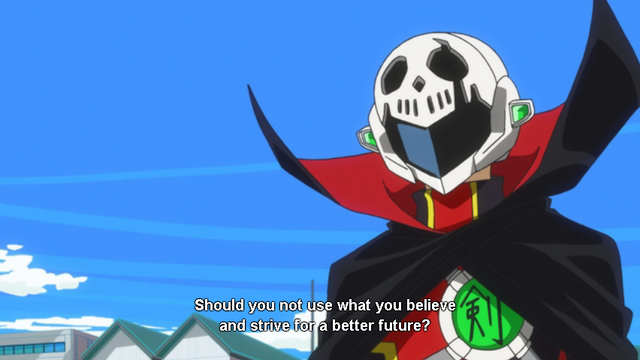 One of Concrete Revolutio's many tools for exploring deeper thematic ideas is Earth-chan, a petit robot girl built to detect the sadness of individuals and swiftly eliminate its cause, branding anything that causes pain as "evil" with no further thought given to any politics surrounding the matter. As a result of building endless goodwill amongst the people by using her many gadgets and willingness to help anyone truly in need, Earth-chan is essentially a cult of personality figure.

If there is anything inherently damaging regarding Earth-chan's relationship with humans then it is this deification. When faced with the protests between a populace enraged with their government (when leaked information regarding unlawful experimentation on superhumans gets out) Earth-chan's limited thought process fails to comprehend what is happening before her, as she was programmed to punish actions alone. She lacks the capacity to understand or care about the intent behind said actions. To Earth-chan, violence is bad, because violence is always bad and can never be OK. Same goes for, property damage, littering, lying, etcetera.

Enforce first, ask questions never. As endearing as this simple purity might be, such limited reasoning makes her an easily exploited target for those who would use her opinion to further their political agenda. The perfect bait for demagoguery, so to speak. However, those actually willing to think for themselves can look at Earth-chan as not an infallible arbiter, but more as a symbol of hope. Such was the case with the electric superhuman Judas, who was inspired to leave a life of crime with a call to righteousness by Earth-chan. 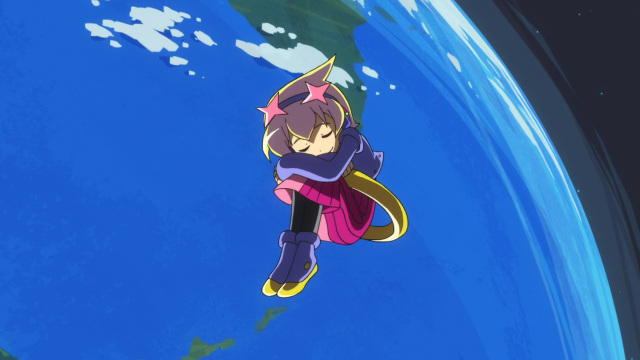 As much of an obstacle to change someone like Earth-chan can be with her stubbornness and cult-like following, she - at the very least - is neutral in the "superhumans vs the establishment" debate. On the other hand, we have a character like Iron Detective Shiba Raito, who's firmly on the side of the establishment. To him, protecting justice is maintaining the peace. The problem here is that Shiba's idea of "peace" is the status quo, and the status quo for superhumans is injustice. Shiba's character arc is one that involves his reaction upon seeing "the law", his one and only sacred pillar of justice crumble on top of him.

We first see Shiba as strictly anti-superhuman in a belief that's based less on logic, and more on some psychological need to be right. As his government's web of lies and cover-ups unfold in front of him, the doubt surrounding his raison d'être becomes more and more frightening. Frightening to the point where he attempts to regain his confidence by stealing the brain chip of another robot law enforcer that holds the same beliefs he has since began to question. Justice is meant to be unerring in nature, so what does that mean for him? If his function has actually been to uphold injustice all along, what else could he possibly do to correct himself other than becoming broken?. 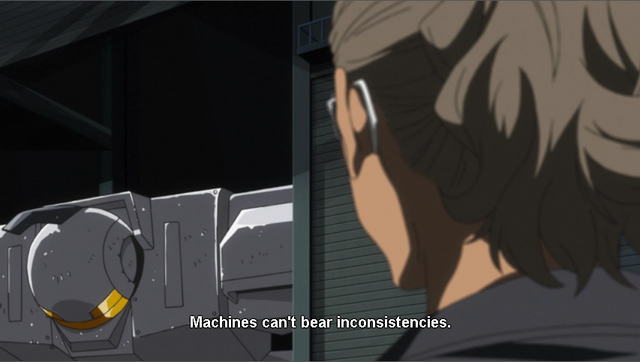 It's safe to say that the idea of a black and white world that Jiro, Fuurouta, Shiba, and Earth-chan want to believe in is not something that Concrete Revolutio is interested in. But the undercurrent of cynicism that runs behind this story isn't there to stamp out the hopes of its characters so much as it is there to make them realize how complicated and thorny the path to a healthier, better functioning society really is. It is a path painted not in black and white, but in broad gray strokes. Concrete Revolutio doesn't hate its characters for trying to be heroes so much as it expects better of them. For them to at least try to understand both sides of a conflict. For them to be willing to give up on their well-intended lies that cause unintended harm. True heroes aren't perfect, but they are individuals that can meaningfully engage with and navigate ethical crossroads whilst inspiring others to never giving up on a better tomorrow. 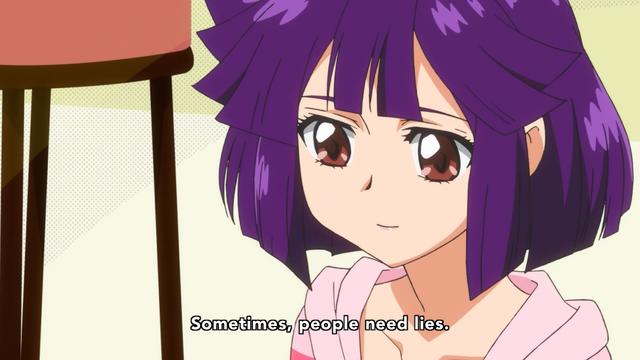 Despite the series' cynicism, Concrete Revolutio ultimately celebrates the fantasy of heroism. As corny and conveniently selective it may be, it acts as a beacon of hope for those that hold little power of their own. One man will never be able to save the world. But as long as heroes can inspire a generation to strive to make the world a better place, their efforts will always be needed.