Friedrich Nietzsche was an 19th century German philosopher that was a huge influence in the field of philosophy and whose ideas have thoroughly penetrated the modern mainstream consciousness. But what exactly does he have to do with the Berserk manga written by Kentarou Miura and its various adaptations? Like many modern works, Berserk takes and implements the ideas of Nietzsche into its story and themes. Although much of this will be speculation on my part, there is one very obvious connection that the creators of the 2016 anime wished to showcase.

One of the PV's for the 2016 anime features a quote from Nietzsche's Beyond Good and Evil which was left in its native German, but roughly translates to ''He who fights with monsters should look to it that he himself does not become a monster. And if you gaze long into an abyss, the abyss also gazes into you''. Anyone who has read the manga should see how this quote would relate to Berserk and Guts' state of mind, especially during the Black Swordsman arc. I'm sure anime watchers would have had a better understanding too if the 2016 anime hadn't decided to skip to the Conviction Arc, but there are already enough rants about the new anime out there so lets explore some of the other connections between Berserk and Nietzsche.

A recurring theme which has defined much of Nietzsche's work is his lack of faith in religion. Nietzsche's father was a priest and he was very religious in his youth, but as he grew older and started writing his philosophical works, his mistrust towards religion became apparent; one of his books is titled The Anti-Christ, and he once famously declared that "God is dead". Nietzsche believed that religion was a shield that people, or more specifically "the herd", used to protect themselves from fear and promotes virtues of weakness and cowardice and a slave mentality. How does all this relate to Berserk? Well, the Conviction Arc in particular is definitely the best example of how Miura views religion. Many of Nietzsche's beliefs are reflected in Guts, such as a lack of belief in an afterlife, and living your life doing what makes you happiest. The anime also begins to show the negative effects of religion among the common people, as well as how it has warped the ideas and beliefs of characters like Farnese, and of course, Mozgus the Chief Inquisitor.

Another way Berserk portrays religion is in its inclusion of the heretical cult lead by the Great Goat. It was a very extreme example, but it made the point of showing how many people can tricked into believing something that will ultimately lead to their downfall. All this is not to say that Nietzsche hates religion however. He believed that religion served a great purpose in giving people's lives a sense of meaning and fulfillment. This is where secularism comes in, as he believed that the state and church should remain separate and instead of religion, people should instead look to culture and philosophy to give their lives meaning and fulfillment.

Nietzsche rejects religion and the majority of social systems, but by looking at his works, it's apparent that he has created his own system and classification of people, which could be seen as a caste system. Much of this stems from the idea of the will to power, where the Noble will define themselves as good, and the common people as weak because they do not uphold their ideals. In contrast, the commoners would first define evil by being noble and, thus by virtue of not being noble, they were good. But how exactly do these ideas translate into Berserk? 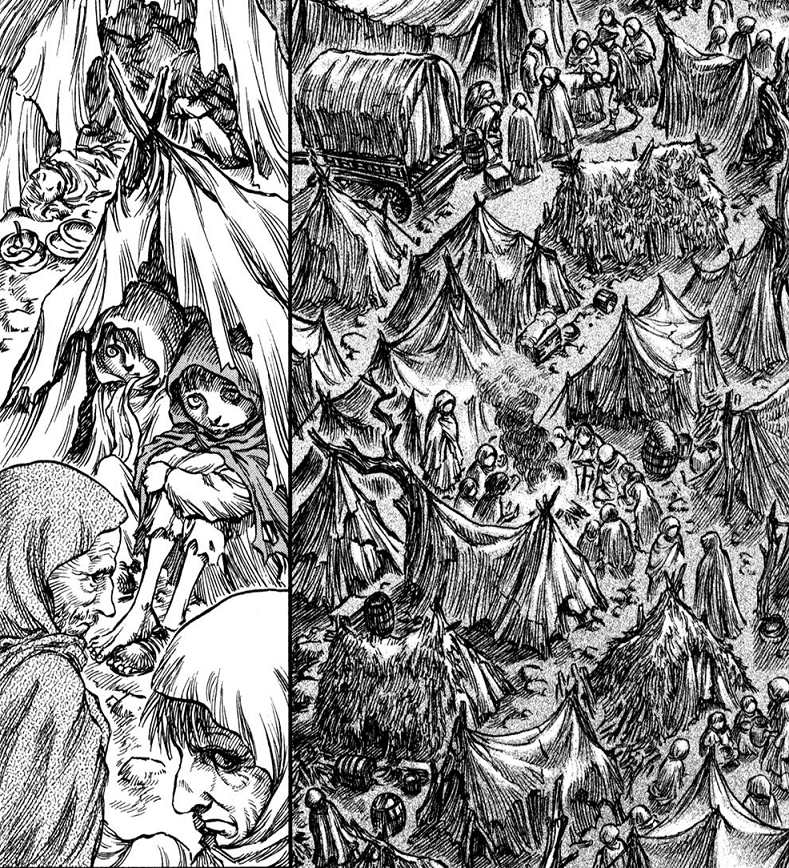 Citizens from St. Albion, during the Conviction Arc

The commoners (or herd) are both weak and sick. They lack the originality, drive, or purpose to break free from their fate. They are easily guided by other forces and don't have any true ideas of their own. They are the simplest of castes, but they nevertheless have an important role to play. The majority of no name characters like villagers and peasants in Berserk would fall into this category. 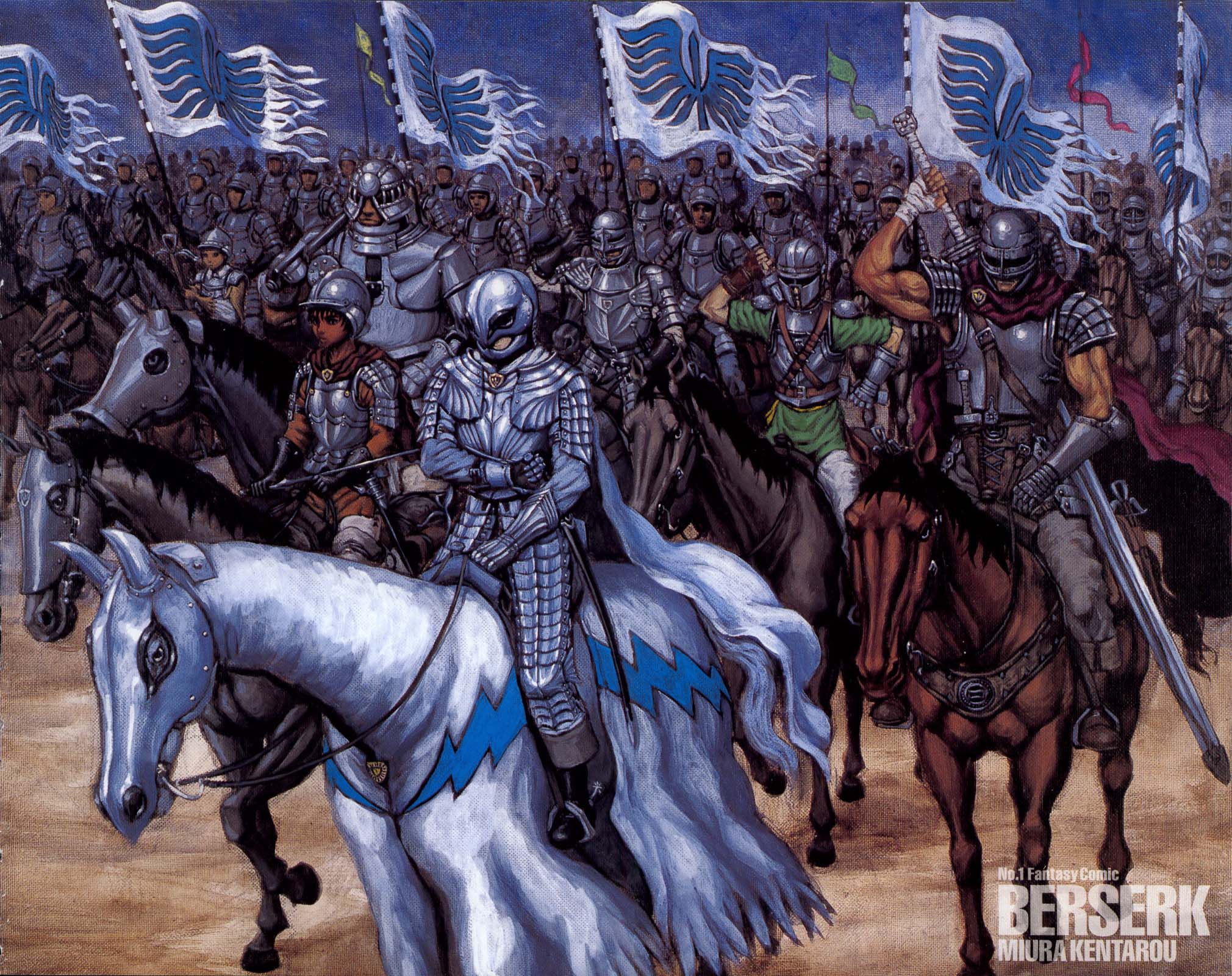 The Band of the Hawk from the Golden Age Arc

Warriors engage in conflicts, impose rule, defend and expand their territories, and have a strong thirst for power. They can impose their values on others, but don't create ideologies of their own and don't question their purpose. They are both strong and noble. This could apply to the Band of the Hawk as a whole as well as Guts when they were recognized by the kingdom of the Midland for their fighting prowess. An example that would fit Nietzsche's mold better would be the knights of the Holy Iron Chain Order as they are all aristocrats and also have a disdain for the herd. 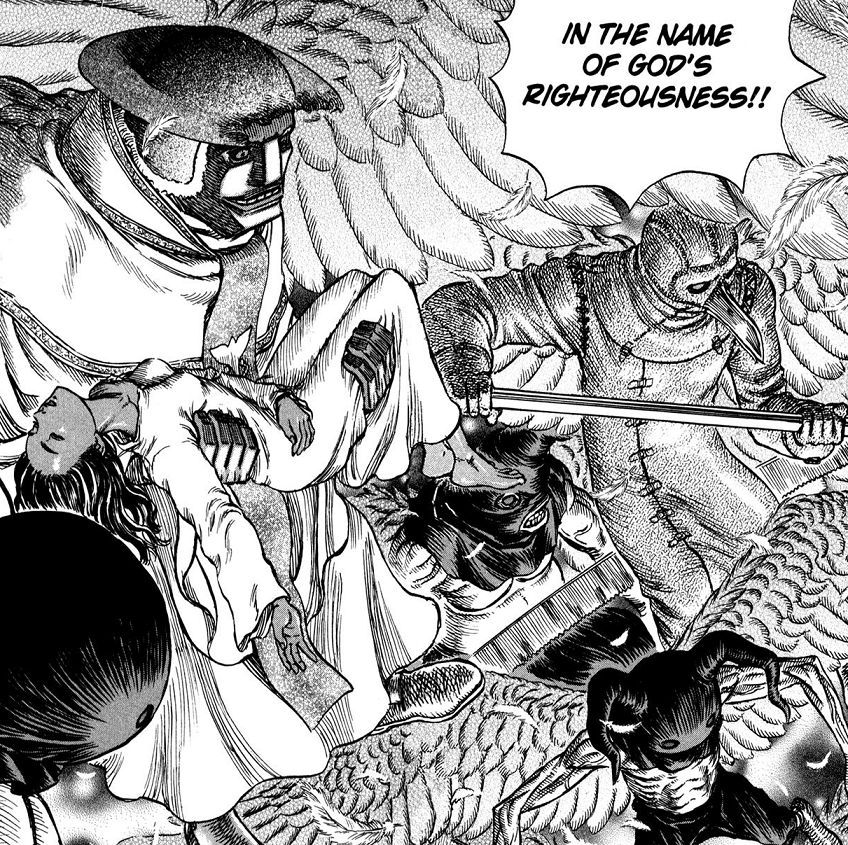 Mozgus and his squad during the Conviction Arc

Lastly, priests have the power to inspire, but can also instill fear and dread into the herd; this power they hold over them is very important. They have a very symbiotic relationship to the commoners, and much of their power is dependent on controlling them. Priests are also noble like warriors, but they are weak. They are strong in other ways however, such as having the power to influence others and also to understand the suffering of the herd . In Berserk, Mozgus could stereotypically fit this view however, Griffith his role as the "Falcon of Light" could also work.

The last concept I would like to touch upon is the Übermensch, or the Superman. For Nietzsche, this is someone that carves their own path and does not follow the herd. Someone that understands the suffering and loneliness that is experienced by much of the herd. A person that transcends his "caste system" and breaks all the rules. Someone that is psychologically superior to all others and works towards reforming the values of humanity, and rather than being an egalitarian benevolent leader, this person would want to strive for the salvation of mankind and would not be afraid of using force to do this.

I think a lot of people would look at Guts as possessing many of these qualities. He has surely gone through a great deal of suffering and is someone that many anime fans would look up to and view as a great man and leader, but upon closer examination, it is really Griffith that most closely mirrors these ideals. Particularly as his time as the "Falcon of Light", but also as the Leader of the Band of the Hawk. He wishes to push humanity in a direction he views as appropriate and will use any means necessary to make his ambition a reality. He defines his own fate and has been shown to be a great manipulator and has gone through nearly as much suffering as Guts.

Hopefully I have convinced some people that applying the ideas of 19th century German philosopher to a Japanese manga about a mercenary with a giant sword isn't as ludicrous as it seems. Even if Miura didn't directly take these ideas from Nietzsche, it just goes to show how deeply his ideas have permeated into our modern cultural zeitgeist.