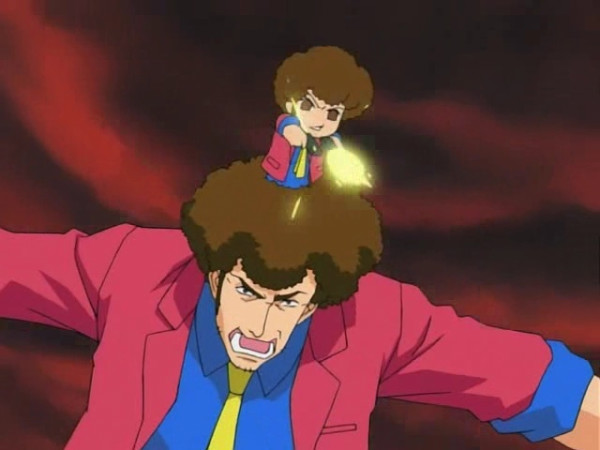 1. Animating is too hard

FLCL is already known for being bizarre, but it's still pretty jarring when the anime suddenly thrusts you into a hand-drawn manga strip sequence that completely breaks away from the usual style… twice. By the second time the characters finally have enough and exclaim that this style is too time consuming and expensive, and it's back to the regular anime style from now on.

As though that's not enough, Naota's dad then demands that Naota tell them what the anime's title means because he's "the star."

2. When characters kill their creators

This series doesn't just break the fourth wall, it obliterates it. Titular character Excel is killed then brought back to life so the story can continue...multiple times. She then almost cancels her own show by murdering series creator Rikdo Koshi. ...And that's just in the first half of the first episode.

3. So little to animate!

Joshiraku constantly makes fun of itself, like in Kukuru's dramatic plea to think of the hardworking animators. Why bother to animate a dialogue-heavy anime in which a bunch of girls sit around talking? Just read the manga instead.

4. The animators take a break

Gintama is famous for self-aware moments, like this one where Gintoki wakes up and realizes he can't move. Could it be… a ghost!? Nah, it's just the animators taking a break from animating and runing off to a spa instead.

5. What genre is this anime, anyway?

Nothing escapes Tamaki. He's totally on to the fact that this anime is a romantic school comedy. But what does that make the rest of the boys in the club?

6. This cameo is pointless

Hayate is constantly breaking the fourth wall by addressing the narrator and the audience directly, but this time the anime has gone a step further by bringing in the anime's director to join in the fun. Why? Absolutely no reason, really. Except maybe to share the glory that is Nabeshin's afro.

7. Get those Japanese words off me

You almost expect this anime to break the fourth wall, and of course it delivers. Over and over, as practically every episode does this, like the narrator nearly missing his cue and the introduced character remanding that the subtitle introduction be removed.

The Dragon Ball series only breaks the fourth wall occasionally, but when it does, it's gold. Nice freeze frame there, Krillin (and nice hair, too).

Even everyone's favorite One Piece is guilty of using this trope, like the crew getting fed up with Crocus 's "running gag."

The best thing about this joke is that it was also made in the manga. What voice actress?