Watch if you liked: One Punch Man, Hunter X Hunter

The latest big hitter from the hit shounen magazine Shounen Jump, publishers of everything from Naruto, Bleach and One Piece to Gintama, Hunter X Hunter and Death Note. My Hero Academia is set in a world where 80% of the population has super powers but we're left to follow the story of one poor kid who doesn't, but still wants to be a hero. The story and style has its influence in Western superhero comics and movies. Heck the main hero in the story is coloured in red, white and blue with stars and stripes and his moves have names like "Detroit Smash" or "California Punch". The manga is a lot of fun and has a powerful message about striving for your dreams even when it seems impossible. Yeah I know that sounds like the most tired shounen cliche, but if that message got through to my shriveled heart, then it really must be delivering that message strongly. The animation will be done by Studio Bones of Full Metal Alchemist fame (both versions). The director isn't amazing, unless you were one of the very few who thought Classroom Crisis was really good, but everything else points to this being a big hit next season.

Watch if you liked: Gintama, Daily Lives of Highschool Boys 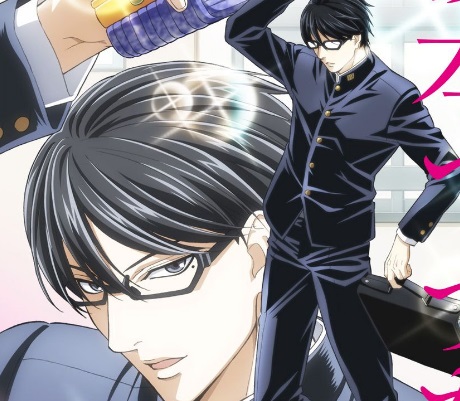 For whatever reason I have yet to see a huge amount of hype around Sakamoto desu ga yet. I can sort of see why if you were to judge this from the plot description alone. It's about a guy who is really good at everything...and that's about it. Not much to write home about, until you see how many different awards this manga has been nominated for and how crazily high its sales figures are. It's only when you start reading the manga and you realise just how funny it is to see this perfect man befuddle those around him. One joke that stuck in my mind was when some bullies tried to pull his chair out from under Sakamoto as he sat down, so all Sakamoto did was sit on this air. Plus this anime adaptation could not possibly be in safer hands with the director Shinji Takamatsu, who has previously directed Gintama, Daily Lives of Highschool Boys, and School Rumble. He's a man who knows his comedic chops. 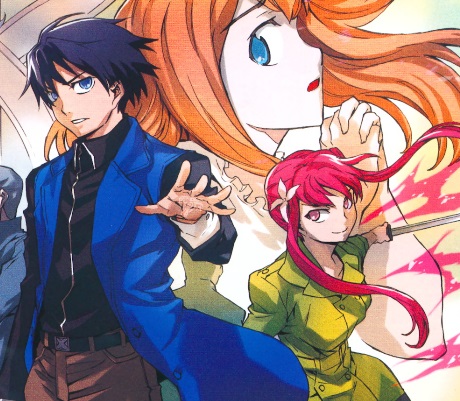 If the character designs for Big Order look somewhat familiar to you, then that would be because you've watched Future Diary. Yes this is the latest work by the author of that bonkers thriller manga-turned-anime back in 2012. Big Order even has the same staff and studio working on it as Future Diary did. The story is about a guy who has developed some kind of super power, only for a crazy pink-haired girl to come after him and try kill him. Sound a bit familiar? While Future Diary wasn't a critic's favourite (although I'm a critic and I thought it was great, so who knows), it really captured the imagination of anime and manga fans in a way Big Order hasn't quite managed yet. Perhaps it's a case of things are just inherently less impressive the second time around? However all signs so far point to if you really liked Future Diary's brand of crazy, you'll equally love Big Order.

The other Bones anime this season, and while it doesn't have the Shounen Jump legacy behind it, has the potential to be just as big as My Hero Academia. At least if the pre-season Plan To Watch figures on MAL are to be believed as it has the highest figures of any non-sequel at time of writing. The trailers look fantastic already with some real eye-catching animation and even has cool background music. The manga is about a bunch of fancy men with superpowers as they solve mysteries. A sort of League of Extraordinary Bishies, if you will. The manga has already proven to be a hit, particularly amongst women thanks to those supremely attractive dudes. Plus as they already announced that Bungou Stray Dogs will air as split-cours (that is to say, they'll air 13 episodes, then take a 3 month break, then air the next 13 episodes), the animation should stay top quality the whole way through. It's hard not to get excited.

Bakuon is about a bunch of cute high school girls in a motorbike club－NO WAIT COME BACK THERE'S MORE! For those of you who are into those cute girl anime you might as well stop reading there because you are probably on board. For the rest of you, there's a key difference with the way Bakuon is written compared to other manga of that ilk. It doesn't feel like the author wrote this manga as an excuse to draw a bunch of cute girls. Rather it feels like the author really wanted to write a manga about his love of motorbikes and realised this was the way he could get that published. It also has a girl who wears a motorbike helmet at all times while wearing a school uniform and giant red bow, like she's some super kawaii version of The Stig. Look man, you just have to believe me on this one.