Get ready to rumble in this battle of Moe Lovers vs. Moe Critics! 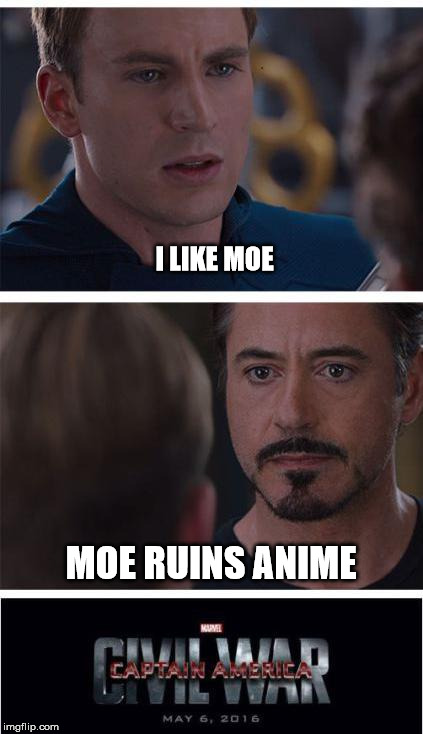 When cap's heart goes doki doki, that's when you know he's watching moe anime. But hey, does it bother you to know cap's preference? Are you angered by his choice? Why not leave your neutrality and choose a side? The moe war has been so big in the industry, even the avengers chose sides. In the slightest possibility of you not knowing moe yet, here's a comprehensive rundown to help you decide!

Moe is an ambiguous word. Both supporters and haters make their own interpretations, but it revolves around one general idea: cuteness. Moe is the strong desire to protect something or someone pure. It can also be vague and mean a strong affection towards anything specific in the anime industry. When someone puny and clumsy trips and gently lands on the ground and you go "awww" instead of helping her stand back up - that feeling my friend, is moe. Now how do we use this to decide? Simple. If the nature of moe sounds wrong to you, you probably hate it. If you like it and you want more, you most certainly support it. If you're not sure, continue reading.

Using Moe in a Sentence

Here are some sample sentences from a blog post that show how the word moe can be used.

Anatomy of a Moe Character 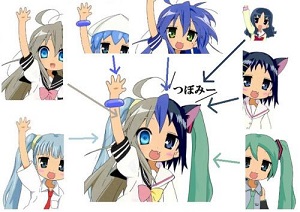 Before you criticize moe, you must first learn how to determine a moe character. Here are the most common physical characteristics almost all of them have:

・Cute Hairstyle - twintails, drill hairs, ahoge (one strand of hair sticking out), and the likes.
・Big head - to accommodate the eyes
・Big eyes - 1/5 the size of the head, with a tall iris and large pupil
・Small nose - the smaller the better
・Slim body - often combined with an overly sized shirt or very long sleeves
・Kawaii voice - "oniii-chaaan!"

Above is a picture of a community-made character named Moetron, created with a combination of body parts from vocaloid Hatsune Miku and a whole bunch of other moe characters!

Just like its meaning, the origin of moe is still indefinite and disputed. All we have are theories. Here are a few of the most legitimate.

1. The first theory is from Ken Kitabayashi of Nomura Research Institute. He said in his research entitled The
Otaku Group from a Business Perspective: Revaluation of Enthusiastic Consumers that moe is derived from the Japanese word "moyasu or moeru" which means burning passion/heart.

2. Another popular theory of the etymology of moe is from Patrick W. Galbraith of Tokyo University. He claims that moe was coined from 2channel in the 1990s. 2chan had a discussion covering the variation of loli and bishoujo in anime. In the discussion, they've decided that Hotaru "Sailor Saturn" Tomoe from Sailor Moon was the most ideal girl in anime at that time. Somehow, they ended up using a part of her last name to describe an ideal anime girl. Her moeness isn't all based on her looks. Her sad story and meek personality also makes you want to take her away from all harm.

Has Moe changed? Has Moe improved?

With the exception of the Aku no Hana pic, here's an image that shows how moe changed throughout the decades. As you can see, the eyes are pretty big. The nose gets smaller every decade to the point that it's only a dot. Also, there seems to be a trend of shiny faces. Of course, this pic is just fan-made. We all know different studios use different animation/illustration. 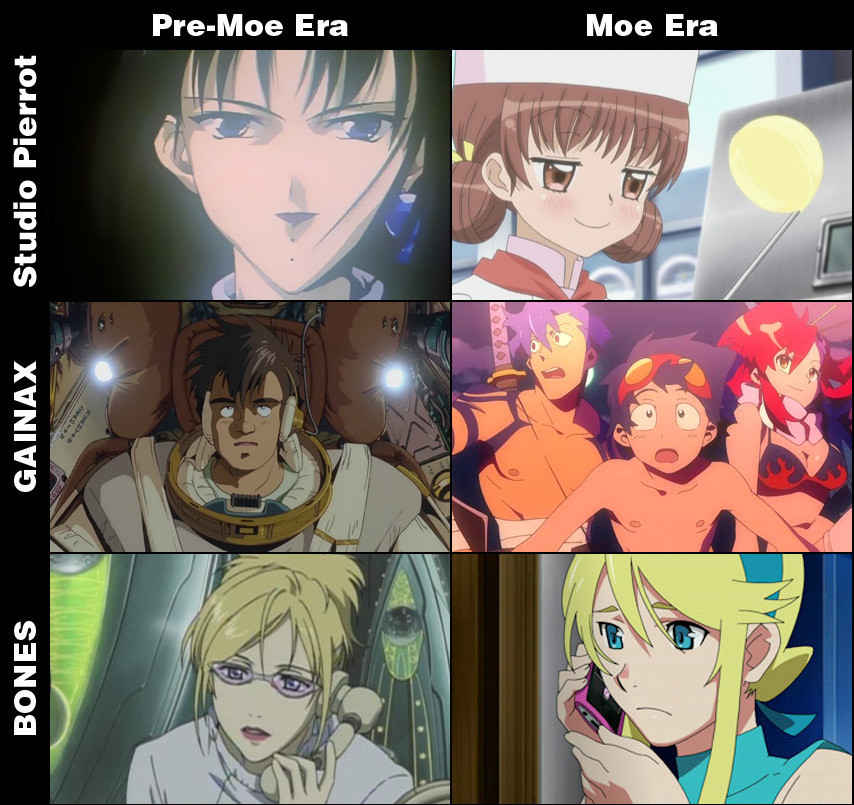 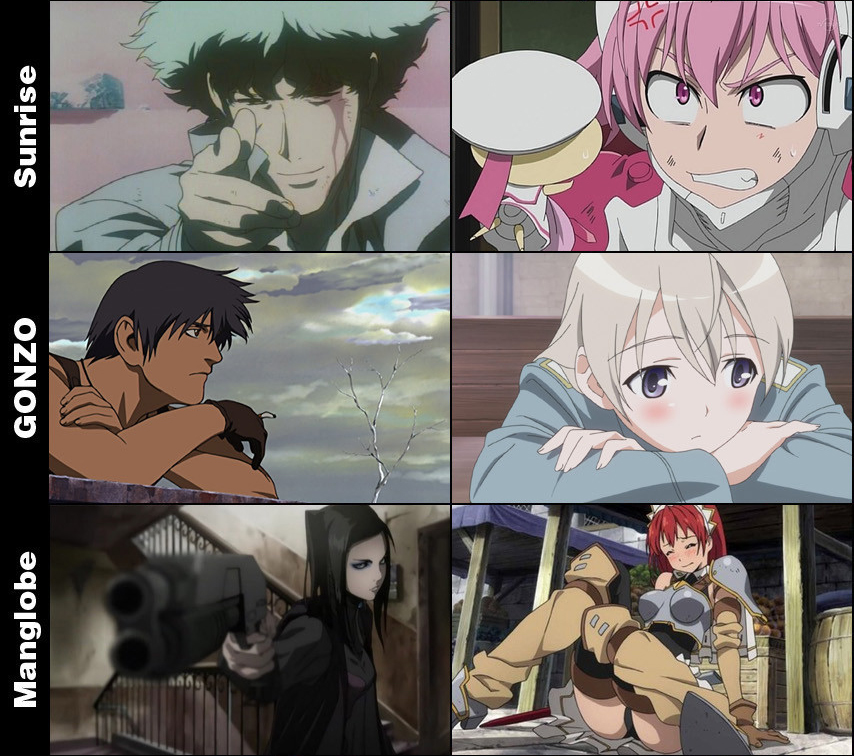 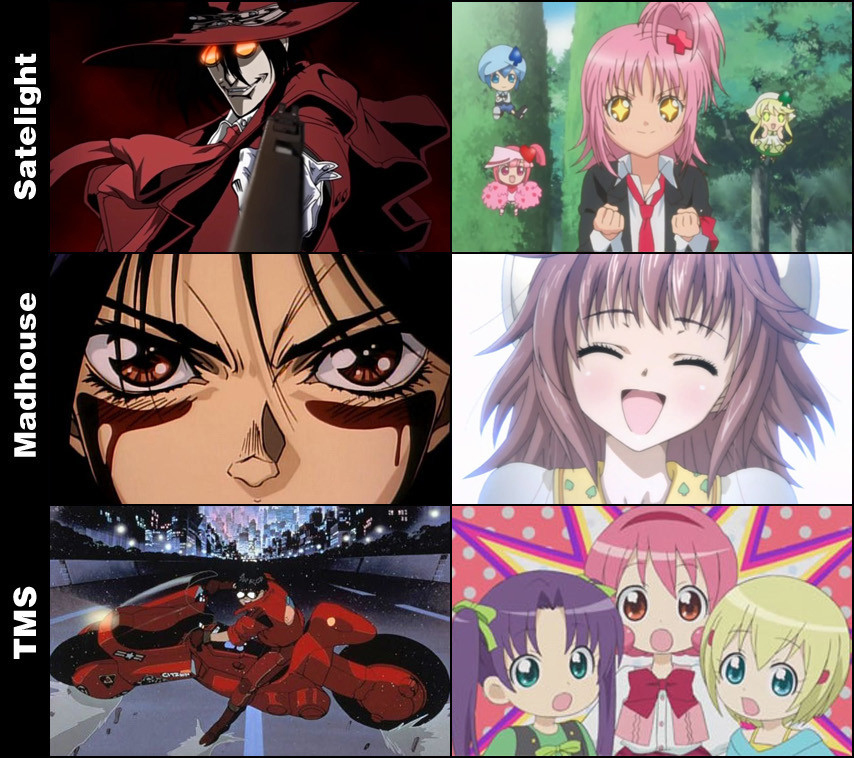 Change is inevitable. The question is whether or not we can accept that change and adapt to it accordingly.

1. The Clumsy - Clumsiness shows vulnerability, and what's more fulfilling than being able to protect a naive, accident-prone woman? One famous example is Mikuru Asahina from Suzumiya Haruhi no Yuuutsu (The Melancholy of Haruhi Suzumiya).

2. The Trap - Traps are guys with feminine looks and sometimes personalities. Have you ever been caught off guard by a trap? You thought he was moe, right? Of course there's no better example of a trap than Hideyoshi Kinoshita from Baka to Test to Shoukanjuu (Baka and Test - Summon the Beasts).

3. The Loli - Loli existed even before moe was coined. Being one of the base themes for moe, loli is definitely a symbol of a character's moeness. A popular example of an adorable moe/ loli character is Mashiro Mitsumine from Mikakunin de Shinkoukei (Engaged to the Unidentified). Thinking you are mature and actually being mature are not two in the same.

4. The Tsundere - Tsundere refers to a character that is harsh at first, but reveals her loving, vulnerable side over time. "Bakaaa! It's n-not like I wanted to be moe or anything." is a line a tsundere would say. Taiga Aisaka from Toradora! is beloved by many as the queen of tsundere.

5. The Kuudere - On the other hand, the kuudere is a character that seems emotionless and cold, but who is quite warm and fuzzy on the inside. These characters are always in control of their feelings except for the rare instances when they give in to their emotional side - a beautiful moe moment. Kanade Tachibana from Angel Beats is one example of a famous kuudere.

7. The Nekomimi - Nekomimi literally means cat ears in Japanese, but it can also be used as a slang word for catgirl. Catgirls can be cat-human hybrids or even just cosplays. If anime cats alone are adorable, what would they be mixed with a cute anime girl? Moe overload! Ruri Gokou from Ore no Imouto ga Konnani Kawaii Wake ga Nai (OreImo) is a great example.

8. The Plain Girl - Plain girls have their appeal. It's not like they're amazing or anything, but they're realistic, and sometimes their moe level comes from the fact that you can imagine them in real life. Maya Matsumoto from Working!! is a moe girl who insists (over and over again) that she's just a normal girl.

9. The Imouto - Imoutos are, how can I say this nicely... cuter in anime? Anime often portray little sisters as stubborn attention-seeking girls who are very childish and annoyingly adorable. The appeal is that you can be a big brother to them. You can pet their heads and look out for them, and sometimes play with them. Umaru Doma from Himouto! Umaru-chan always comes to mind when thinking of a moe imouto.

10. The Quirky - Put the right dosage of quirkiness in a character and it'll be moe! Contrary to the plain girl archetype, quirky girls are pretty entertaining and unpredictable, and that's their appeal. Their childish nature also helps, especially if they look a little bit loli. Rikka Takanashi from Chuunibyou demo Koi ga Shitai! is moe and a lot more than a little bit quirky!

11. The Meganekko - Megane is literally "glasses" in Japanese. Meganekko is a "glasses-wearing girl". Not all faces look good with glasses... in real life. The anime world seems to be more friendly in terms of poor eye sight. Meganekko are often good-looking characters. Add more moe characteristics and they should be ready to go! Mirai Kuriyama (aka "the face made for megane") from Kyoukai no Kanata (Beyond the Boundary) is one good example of a moe character with glasses.

12. The Innocent - Innocence is purity. Pure characters are corruptible. Unless you're some creep, a normal person would protect something pure from being defiled by anything filthy, and that is exactly the feeling of moe. Chitanda Eru from Hyouka has this glowing innocence mainly coming from her curious eyes.

・Kawaii - Kawaii is a term commonly confused with moe. While moe is a vague word that means a strong affection towards a specific thing, kawaii literally just means cute in Japanese. Kawaii applies to more things. For example, animal stuffed toys are kawaii, but they're not moe.

・Chibi - Chibi is a slang word meaning "short person". In anime, it refers to a smaller form of an existing character. Usually with big heads and short limbs, characters are turned into chibi to look more moe.

・Moe blob - When a character has no solid personality or influence in the story but she's moe, she's called a moe blob. So why make moe blobs? Moe blobs exist to increase sales, that's why.

・___ moe - This term refers to moe towards a certain archetype For example, "megane moe" means that characters with glasses give you moe feelings.

Alright, time to decide guys! With all that moe information, there's no reason to stay neutral! Will you hate, or will you support moe? Join the war! Cap awaits!