The Japanese Folklore Behind Sasuke's Abilities in Naruto

Naruto is chock full of references to Buddhism, history, and mythology. Here's an in-depth look at the origins of Sasuke and the Sharingan's techniques! 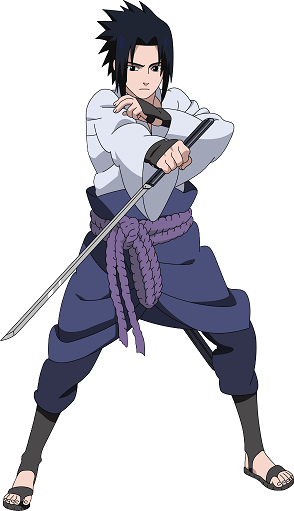 Uchiha Sasuke is Naruto’s best friend and arch nemesis. He is the last living descendant of the Uchiha Clan, and thus has the clan’s Bloodline Limit, the Sharingan. He was named after the Hidden Leaf’s 3rd Hokage’s father, Sarutobi Sasuke.

His entire clan was killed by his older brother when he was young. Since then, he had made it his life goal to destroy his brother, who he believed had robbed him of all he loved.

Sasuke’s skills and their origins:

Created by channeling lightning chakra into one’s hand, the sound produced by the crackling electricity sounds like one thousand birds, hence the name. This attack is executed by running directly at the target. It’s usually easy for enemies to predict the attack and dodge it because it requires charging directly at them, but with the use of a Sharingan, the Chidori user can find openings in the enemy’s defense, thus eliminating the drawback. 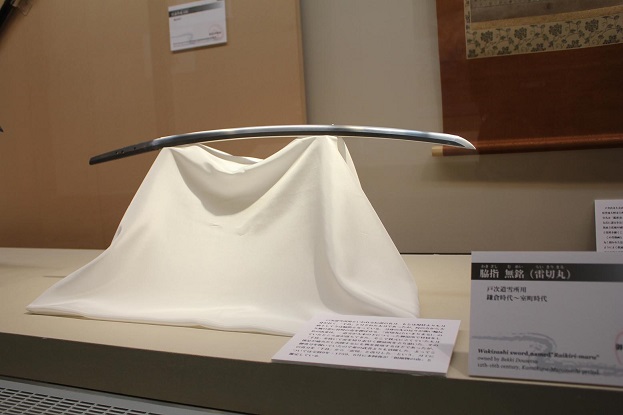 The name Chidori comes from the story of a samurai during the Sengoku period of Japan named Tachibana Dōsetsu (22 April 1513–2 November 1585). Tachibana owned a famous sword named Chidori (千鳥, Thousand Birds). He was struck by lightning as he was hiding from the rain under a tree. But by cutting the Thunder God inside the lightning with his sword Chidori, Tachibana managed to survive the incident. He then renamed his sword to Raikiri (雷切), or Blade Cutter. 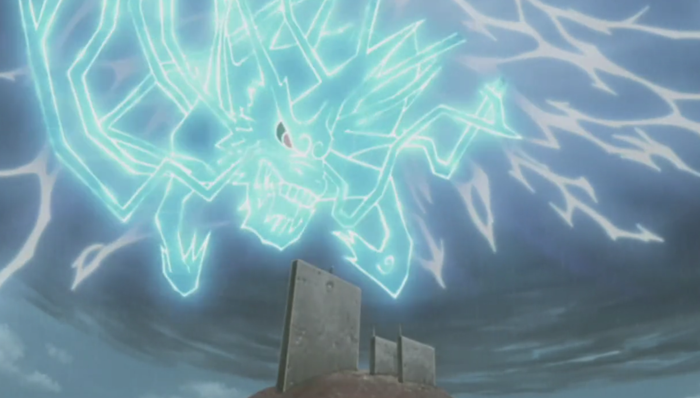 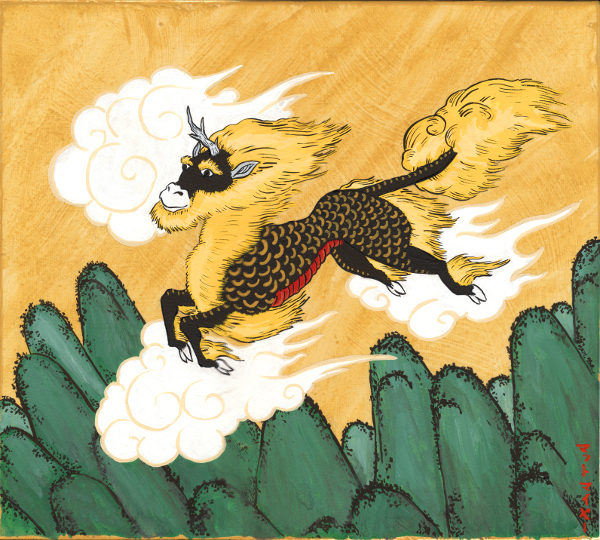 The Kirin, or Qilin is a mythical chimera in East Asian culture. It’s said to be a good omen that brought prosperity, serenity, or the arrival or passing of a good ruler. The Kirin is typically depicted as scaled and hooved, with parts from various animals. They are often golden or multicolored.
Despite being a peaceful, benevolent creature, the Kirin is ranked as the most powerful mythological animal in Japan, and the third most powerful in post-Qin Dynasty China, with the dragon and phoenix being first and second.
Kirin is also the Japanese word for giraffe, which in the past was thought to be the mythological creature. 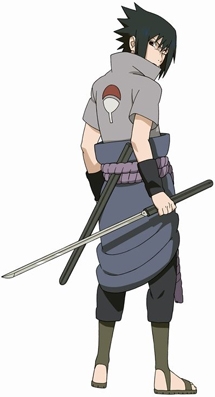 Sasuke’s chokutō, a traditional one-edged Japanese Sword. Sasuke can infuse the blade with lightning chakra to increase the cutting power and range. 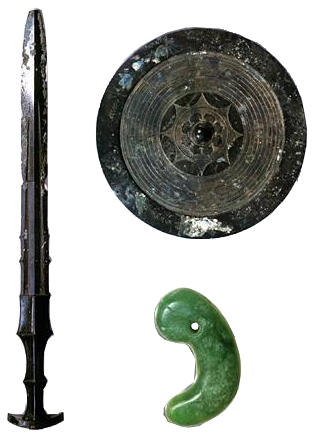 Kusanagi no Tsurugi (Grass-Mowing Sword) is one of the Three Imperial Regalia of Japan, which are the Kusanagi no Tsurugi, the Yata no Kagami (Eight-span Mirror), and the Yasakani no Magatama (Grand Jewel). They represent valor, wisdom, and benevolence respectively.
In Japanese legends, Susanoo, a deity, found the sword inside the body of Yamato-no-Orochi after defeating it. He first named it Ame-no-Murakumo-no-Tsurugi, and presented it to his sister Amaterasu, the Sun Goddess. Generations later, it was passed down to Yamato Takeru, a young hero. He renamed it Kusanagi-no-Tsurugi after using it to cut burning grass and redirect the fire caused by the enemies’ burning arrows.

Those who have awakened the Mangekyō Sharingan can use this ability. Due to the heavy chakra cost, the number of times Amaterasu can be used is limited, but it is very powerful. By focusing the Mangekyō Sharingan at a specific point, the user can create unextinguishable black flames that burn through any living thing. 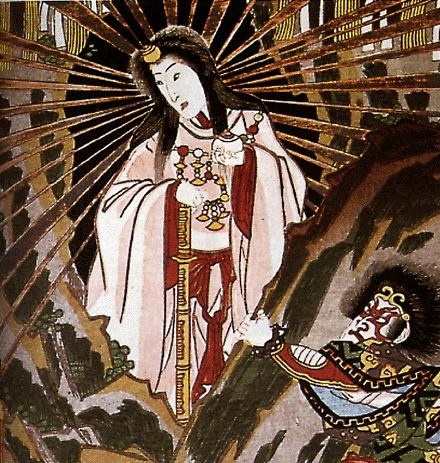 Derived from a Japanese legend, the technique in Naruto was named after the Japanese goddess of the sun and universe. The imperial ruling family in Japan are thought to be descendants of this goddess. She has two brothers, Susanoo (the god of storms and the sea) and Tsukuyomi (god of the moon). 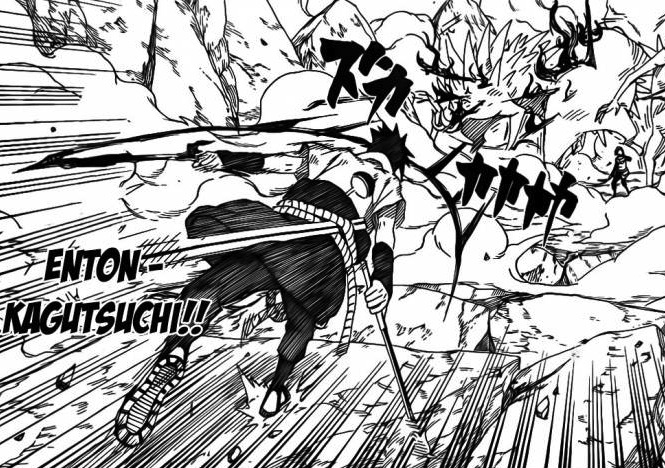 Known in English as Blaze Release: Flying Flame, This technique allows the owner of a Mangekyō Sharingan to shape Amaterasu flames into different shapes, including weapons, projectiles, and defensive armor.

Kagutsuchi is the child of the deities of creation, Izanagi and Izanami. The god of flame, he burnt his mother Izanami during his birth, killing her. In a rage, Izanagi kills Kagutsuchi, cutting him into eight pieces, which became eight volcanoes in Japan. His name means “Shining Power” in Old Japanese. 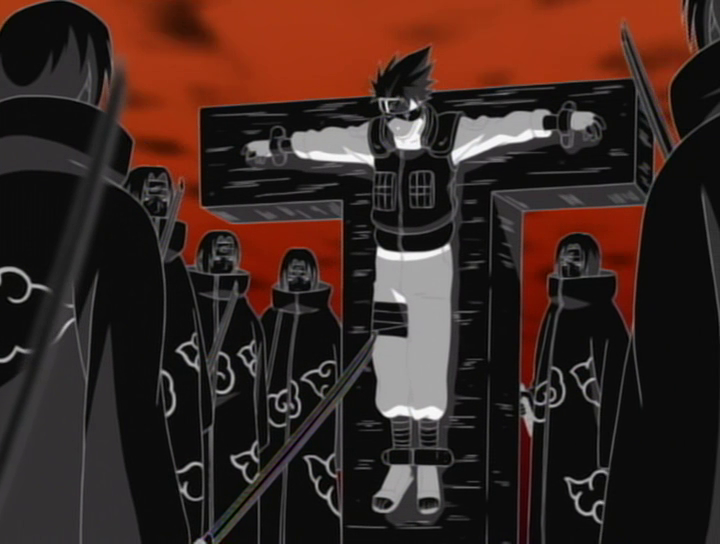 The counterpart to Amaterasu, Tsukuyomi is a powerful genjutsu that affects the mind rather than the victim’s physical body. Tsukuyomi requires eye contact to be executed, but then leaves the victim trapped in an illusion that distorts the passing of time. Seconds may seem like hours or years under the influence of Tsukuyomi.

Amaterasu’s brother and husband Tsukuyomi is the god of the moon as well as time. They are never seen together because Tsukuyomi angered Amaterasu after killing the Goddess of Food, and was banished to the other side of the Earth. 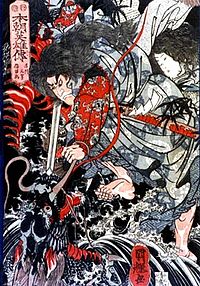 One of Amaterasu’s brothers, Susanoo is also her biggest rival. He is perhaps most famous for slaying the eight headed monster Yamata-no-Orochi. After being banished from Heaven, Susanoo discovers an old couple lamenting having to send their eight daughter, Kushinadahime, to be eaten by Yamata-no-Orochi (the other seven had previously been eaten one at a time). Using trickery and strength, Susanoo defeats the creature, and discovers what was to become the Sword of Kusanagi.

It's amazing how much thought author Kishimoto Masashi put into the names of his characters' skills!