There's always room for one more loveable idiot in Jitsu wa Watashi wa, and Akane-chan certainly fits the description. But her presence definitely explains a lot about this school... 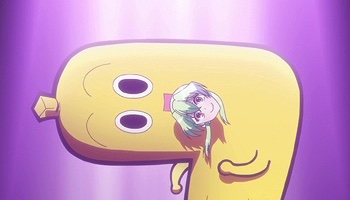 The thing about shows with a cast full of idiots is they can (of course) be really, really bad. But that's usually because they're only idiots because of plot necessity (and only when it's necessary) or the writers themselves don't seem to realize they're idiots (those are generally the very worst). 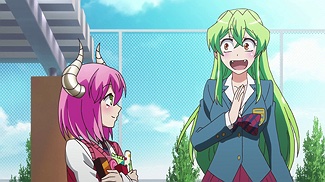 Here's why Jistu wa Watashi wa makes the baka experience work, and the answer is twofold. First, the fact that these folks are idiots is basically the joke itself. And second - and most importantly - they make them likeable in spite or even because of their denseness. That last one is no easy trick - it takes a pretty good writer to pull it off - but it's pretty clear Matsuda Eiji is a good writer. 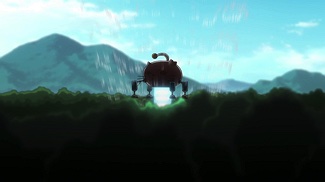 The newest entry into the baka brigade is Koumoto Akane (Ichimichi Mao, who was great in Gokukoku no Brynhildr and is off to a very strong start here), a character who betrays expectations a couple of times in this episode. It's no secret that Asahi's "It wouldn't surprise me if there was someone even weirder in this school) is a setup line, but no time is wasted - Akane shows up sporting a pair of horns (one of which is adorned by a crow) as soon as the words are out of his mouth. 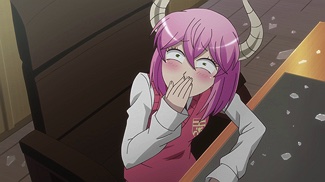 We'd already had the reveal that something demonic was up with Koumoto-sensei, so this development doesn't come as a major surprise. Akane-chan is very much playing the loli card here, and poor simple Youko just can't get past how small and cute she is even as Asahi is rightfully freaking out. But Asahi isn't a loli-devil and Akari's little sister or the like - in fact, she's her great-great grandmother, and the principal of the school. Which explains a hell of a lot. 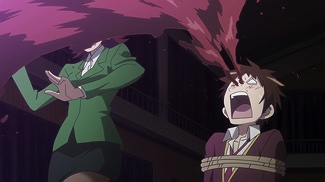 From here on out it's pretty much one great gag after another, much of the steam coming from the fact that Akane is almost as big an idiot as Youko. She may be thousands of years old, but she can't resist taking the bait when Youko treats her like a grade-schooler. Meanwhile Nagisa has gotten an alert that demonic energy is on the loose, and zips (well - rather slowly) towards the source in a giant flying catbot (which will have comic consequences of its own). 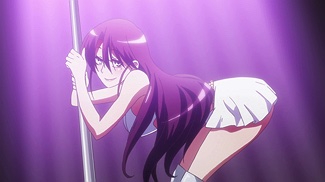 The crescendo hits when Youko and Akane - arguing over who's more of a child - decide to have a sexiness contest to decide who's more grown-up, with Asahi as the judge. That wouldn't be so bad for him if self-professed pervert (and she means it) Shiho isn't the emcee, and intermittent demonstrator of how to properly cause nosebleeds. It's hard to pick which one of the disastrously ineffective attempts at sultriness by Youko and Akane is my favorite, but I'd have to go with Youko's attempt at cosplay ("Nana nana!"). 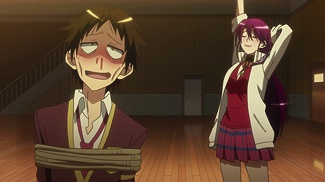 Not to be forgotten, Mikan is in here too - preparing "Russian cream puffs" (I don't even know what the joke is there, to be honest) for the sequel contest Youko dreams up after the disaster of the first one. Mikan is still the one elements of Jitsu wa I just don't find funny, but pretty much everything else here works like a charm, and the crazier this series gets the more funny it becomes.