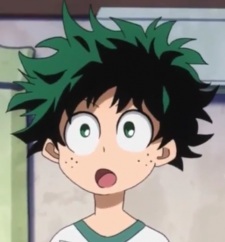 Unknown-Weeb Apr 5, 2019 12:45 PM
Spread the word about the church of the Shield Hero and his subjects learn more info from the pan flit at one of our many Church's or ask one of the many supporters of our religion.

aiaisu Dec 17, 2017 10:14 AM
hi!! you have some really great taste! nausicaa was one of my favorite movies growing up! ive seen you around on zingbox as well ^^
also kaiba is so underrated im glad you enjoyed it too!

Desperationation Oct 9, 2017 9:30 AM
I can assure you that my message was intended as a response to the Made in Abyss statement.
Like I said before, I would only say something like this to people who I truly find stupid (The thought that you hated when animes had lolis or shotas and considered it not ok and calling the author a pedo with no basis. Which was not only evident by the comment, but by your profile description too.)

I thought I would get my point across through sarcasm since I always start conversations with strangers that way anyways.
You didn't respond well to that so I snapped.
And I don't blame you. As much as I'd like to call it a sarcastic and snarky comment, my first message does seem like an indirect attack.
And for that, I apologize.

Desperationation Oct 9, 2017 7:49 AM
Why did you go this long without showing me that illustration?
This argument could have easily been avoided if you had shown me the evidence behind what you were saying.
And don't say the "I can't be bothered" thing because you kept up with this shit.
I thought you were assuming based on the way he draws his characters and his appearance that he was pedophilic. That's why I called you out in the first place.
And you can't blame me because not a single time did you show me or tell me that you had evidence to support your comment this entire time.

I'm gonna tell you this though, that illustration is not okay and I completely understand your point of view now and agree with it. Don't get me wrong, I'm not defending the author anymore. But I don't think the other scenes were included for the purpose of fan-service at all.

In an anime where a boy and a girl go on an adventure, excluding stuff like this would be abnormal,
The scene where she was naked is where she gets punished for doing something terrible. And she was obviously in pain, red lines on the face don't always elude to pleasure. Not necessary but understandable.
Also, striking people is more efficient without clothes so yeah.
The pissing herself constantly just shows that she's but a mere child. Never did I think that it was a form sexualization in any way.
Reg and everyone around him think that he is a robot. Even though he does possess a lot of human-like traits, like the human skin on his body and showing emotions like sadness, happiness, and rage when he fails to protect Riko. So even though this would be a weird way, it's obvious that these scenes were included to showcase the humanity of this little robot boy.
Then again, some would argue that these scenes were included for comedy but I digress.

It all makes sense. If it didn't, I don't think anyone would have enjoyed the series.

Desperationation Oct 9, 2017 1:32 AM
You're not reading my comments.
You just feel attacked and are replying based on that.

In a scenario, where I find a someone's comment irredeemably stupid. Like I dunno, calling out someone who draws a manga where nothing pedophilic occurs for being a pedophile just because the main characters are young chibi kids for instance. Not to mention judging them based on their appearance.
Are you telling me that was an intelligent comment?

I told you 3000 times that I started out everything with sarcasm until you replied violently and made me realize that joking around with you won't take us anywhere.

Desperationation Oct 7, 2017 8:07 AM
My comment's purpose was to make you realize how stupid your comment was.
Yet you say that you don't care how I feel about it. Meaning that you're not even addressing the issue in hand

I don't go out of my way to upset people. I have better things to do. But whenever I actually get disgusted by an idiotic remark that someone made, I WILL POINT IT OUT TO THEM

My ideology isn't that difficult to understand. I would have never said anything to you if it wasn't for that comment.

Desperationation Oct 6, 2017 3:54 AM
Are you stupid?
I told you why I commented that.
Because of how stupid your comment on the author of Made in Abyss was.
Why does his appearance have anything to do with fetishes he has and why are you so quick to write something this retarded?

I don't care if you're a random person if I see someone doing something stupid I'll be sure to point it out.

Desperationation Oct 5, 2017 2:06 PM
I was honestly poking fun at how retarded your comment on the author of Made in Abyss was.
So, I decided to do it through (obvious) sarcasm.
I guess I was being too considerate huh?
Regardless, it's still amusing to find someone who would reply to a joke like a complete idiot every now and then.

Desperationation Oct 5, 2017 10:02 AM
Well, the fact that you didn't get triggered is my problem now lol

Just having a little fun that's all.

Desperationation Oct 3, 2017 10:34 PM
My favorite anime is Black Bullet because of all the cute LOLIS it has.
I also only watch animes that have at least one CHILD as a character.
Cause KIDS make animes better.
I only watched the first Naruto anime because it was interesting when they were KIDS. But then they grew up and it became bad.

I don't really like Boku no Hero Academia but I sure like the CHILDREN in that anime.

xdiabolikloversx May 19, 2017 4:27 AM
im sorry then I do get very confused my minds like a tub of sweets find one drop it never seen until the last one:)
All Comments