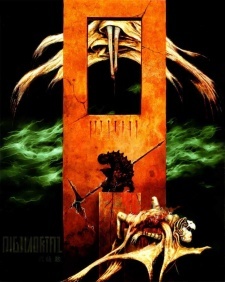 fujifruit Jul 6, 2014 11:55 PM
"Ryo's dog (John was it's name) was the one his father decapitated with a shovel (and impaled on a piece of bamboo in the OVA) after already having killed his canary. You still haven't said what is inherently, artistically bad about "darkness" however."

Ah, right. Well his father did try to kill him too and that was explained by a demon having influence on him. That stuff never actually happened, anyway.

"You still haven't said what is inherently, artistically bad about "darkness" however."

A lot of Tezuka's adult-oriented manga just feels completely mean-spirited to me.
Book of Human Insects is like 300 or so pages of a women killing people without consequences.
There's also a scene where she starts licking a statue (or was it a corpse?) of her mother.
This is just my personaly opinion, though.

"Well, Ode to Kirihito is kind-of characterized by everyone dying all the time."

Still, I wouldn't say it was well done most of the time. Again, just my opinion.

"Don't remember much of the detective's role in MW, so can't really comment on that, (I've borrowed my copy to someone else) but did he have a chance? Didn't Yuki leave before anyone really have time to react?"

That seems like a pretty big thing for him to overlook or even consider.

"This may be sacrilege as a Tezuka fan, but I don't really enjoy Black Jack (from what I've read)."

Eh, it's episodic and that's part of the fun. Black Jack is a cool characters and some of the chapters are ahead of its time. Remakes probably improve on the basic idea at least.

"It's been ages since I've read it, but didn't the shoujo Hi no Tori prototype have a similar style to Princess Knight, which you disliked?"

It's similar but less wacky. I remember enjoying the first volume of Angel's Hill too.

Nah, that was some bullies who killed rabbits he was watching after because of how spineless he was. It basically introduced us to his personality and how Miki has more balls than him.

"I disagree strongly on 70's Nagai being anywhere near 70's Tezuka in term of artwork. As someone who draws regularly I'd have a harder time imitating Tezuka of this period than I'd have Nagai."

Have you read any of Violence Jack? I think Devilman and Gakuen Taikutsu Otoko have fantastic layout and Nagai's monster designs and facial expressions are very distinct.

"Eh, what? Character's kind of stop having any purpose beyond being dead when they die."

Let me use the Furry Epidemic manga as an example, the protag travels with a flexible girl and they need money. We then get massive death flags and she becomes a chicken nugget.
Another example would be his wife who is just kind of randomly murdered by a guy in the woods.

"Can't think of any examples of this beyond characters that are meant to be either irrational or other-worldy."

How about the great detective in MW? He knew how cunning Jeff Goldblum was, but didn't even bother to confirm if Jeff was actually dead or if he switched with his twin. And yes, lack of motivation is another problem I have. In Vampires Rocky is just evil just because

Also, I'm fine with Black Jack, Hi no Tori, Adolf, and Dororo.
I've only read a few volumes of Hi no Tori because of how expensive the actual copies are.
I've also read the shoujo version which has a style I genuinely like.

I gave as much of an explanation that I felt like giving. They all have the same problems. Female characters being killed off once they served their purpose is one problem, another being illogical characters, and pointless edgy crap like feeding a baby to a snake. Sure, you can make that argument for Violence Jack and all the gore, but it's not regarded in the same light as others view Tezuka's work.

As for cartoony, Nagai hasn't drawn like that since the 70's and even then he didn't switch between semi-realistic and disney-style art. Hell, even by 70's standards Tezuka's art just can't compete with Nagai, Ishikawa, Ishinomori, Shigeru Mizuki, or Leiji Matsumoto.

I'm perfectly fine with his child-oriented manga and what I've managed to find of Phoenix was also quite decent. Dororo would've been great if the ending wasn't so abrupt.
All Comments