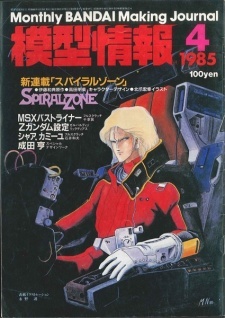 Coolspot Nov 26, 2017 11:19 PM
Hey I stumbled upon a review of yours and figured you might be a good person to ask, can you think of any manga with a Patlabor or crest of stars kinda vibe?

Czarine May 10, 2017 8:09 AM
Ah! Good to know. I did watch the whole series even without the subtitles, since I understand some japanese. I'm sure this info will help my friends who don't understand japanese. Thanks!

Prideful_Master May 9, 2017 6:37 PM
Just want to thank you for your Tezuka reviews. I read them before indulging in some Tezuka and I was initially surprised at your negativity towards them. Now, though, I have to mostly agree with your assessments on them, especially with Human Insects.

THEAnimeHERO Jan 12, 2015 3:53 AM
I just realized, I don't know if you meant anime or manga. As said before I bought the english manga volumes online from websites but I ended watching the anime raw on different channels on YouTube.

This movie is subbed https://www.youtube.com/watch?v=p1vNM8IrX7k

THEAnimeHERO Jan 11, 2015 6:01 PM
I found some chapters on MangaPark but I had to buy the licensed volumes from Amazon and Rightstuf so I could finish reading the story.

painocus Jul 10, 2014 5:13 PM
"That stuff never actually happened, anyway."
It didn't? I guess you could conclude that it was all part of Ryo's artificial memories, but I always assumed that it did happen (but his "father's" memories was messed with like Akira's was). Apparently according to the novels (written by Yasutaka, Nagai's brother, but unlikely without input by Go himself) it did happen like that. Regardless, there are countless examples otherwise of such cruelty in Devilman. I've already mentioned Sachiko and Akiko, and can throw Susumu into the mix. And I've lost count how many women were introduced into Deviman Lady only for the purpose being rape and/or murdered by this or that devilbeast.

Where I think you are "missing the point", is that Tezuka and Nagai don't appear to want us to cheer on the horrible things that happens, but to sympathize with the victims. As Hideaki Anno said in an interview with Nagai:

"I think it's better to show repugnant things just as they are. If we succeed to transmit the emotion that atrocious things are atrocious, it's mission succeeded. When someone tells me "It's too horrible, too violent", that pleases me, because it's a healthy and normal reaction. When they tell me "I cannot watch, it's too much", I say "Okay!""

(Although I must admit that I suspect Nagai of drawing at-least some of those rape scenes with only one hand on the drawing table. Tezuka at-least cuts away or represents the scene symbolically when he deals with rape and also show the victim's emotional struggle afterwords while in Nagai's stuff it often just is there for no reason beyond itself. But then we are getting into fetish territory and I won't judge someone for their fetishes.)

I could agree that Book of Human Insects is somewhat mean-spirited, but not for the reasons I think you are implying. It is not "look, you can kill people and there are no consequences!" or "all these people deserve to die, let's enjoy our self with murder-escapism", but "Machiavellian cynicism and Ayn Rand-ish egocentrism are not good ideologies and will mess up both you and the society around you; here, let me show you with a character that embodies the logical extremes of these philosophies". The purpose I think of the "sucking her mother's corpse's (?) bosom" scene was to show that beneath all the "success" her lifestyle had let her grab to her she really just wanted back to the only true human relationship it had ever allowed her to have and to the innocence of her early childhood. (And that it had driven her completely bonkers at this point).

MW: I don't think one moment of weak judgment from a single character is enough to say that the character as a whole is illogical or that Tezuka's work is plagued by such characters.

Black Jack: As I said, I can see why some would like it. It is more me feeling like I'm missing out on potential emotional stuff, rather than faults with the work itself.

I remember the Unico manga inhabiting something of a middle ground between proto-Hi no Tori and Princess Knight. So you might like that, but look up artwork from it online before buying.

painocus Jul 6, 2014 11:25 PM
Devilman rabbits: That was Akira and only in the OVA. Ryo's dog (John was it's name) was the one his father decapitated with a shovel (and impaled on a piece of bamboo in the OVA) after already having killed his canary. You still haven't said what is inherently, artistically bad about "darkness" however.

I have read parts of Violence Jack. Nagai has some good layout, but the excellent parts are the exception rather than the rule in my opinion. I find Tezuka to generally be much better (well late Tezuka, early Tezuka was essentially just a grid, even if he also then did some inventive stuff like the opening to New Treasure Island).

Well, Ode to Kirihito is kind-of characterized by everyone dying all the time. Again, not just the women. People die, often quickly and unexpectedly. Those are facts of life. The only example I can think of was Apollo's Song, and there it was kind-of the point, (the couple dieing over and over again for eternity). There was also that one woman in Ayako who was killed off almost as soon as she was introduced, but as with Kirihito, there was also men who died even quicker.

Don't remember much of the detective's role in MW, so can't really comment on that, (I've borrowed my copy to someone else) but did he have a chance? Didn't Yuki leave before anyone really have time to react?

Well, Rock is something of a delusional, sociopathic narcissist in a lot of Tezuka's later work. From what I've read sociopaths often just become that way. Haven't read Vampires though.

This may be sacrilege as a Tezuka fan, but I don't really enjoy Black Jack (from what I've read). I understand why others might. But it is often too contrived for my taste and suffers severely from a problem it shares with a lot of his other kid's stuff: way too fast pacing, especially when it comes to the emotional stuff, which in many Black Jack stories should be the center-point. Contrast with Frebe's (was that her name?) two-page reaction when she realizes Sapphire's gender in Princess Knight, showing her going from surprise, to laughter, to sobbing. Now that was good visual storytelling. But maybe I've just been unlucky with the Black Jack stories I've tried.

It's been ages since I've read it, but didn't the shoujo Hi no Tori prototype have a similar style to Princess Knight, which you disliked?

Didn't Devilman more or less start with Ryo's puppy being brutally killed? And it's not just Violence Jack, Devilman Lady is partially made out of 1/4 rape and another 1/4 of gore. Regardless I don't see why "Dark" and "Edgy" are objectively worse than "Light" and "Edgeless".

Tezuka doesn't switch between "semi-realistic and disney-style art" within the same work. He draws comedic elements more cartoony, but it is always proportionally to the overall style of the specific work. The cartoony bits in say, Ayako, are less cartoony than those in say, Jungle Emperor. But so did Nagai (at least at the time). And again why is this wrong? What's the fault in using a style flexible enough to conform to the mood of the scene at hand?

I disagree strongly on 70's Nagai being anywhere near 70's Tezuka in term of artwork. As someone who draws regularly I'd have a harder time imitating Tezuka of this period than I'd have Nagai. Only recently have Nagai caught up with Tezuka. Shin Violence Jack is the only thing I've read that I whould say might have surpassed him. And later Tezuka had better panel layout than anything Nagai has ever done. (That I've read.)

"Female characters being killed off once they served their purpose is one problem." Eh, what? Character's kind of stop having any purpose beyond being dead when they die. This goes for male characters just as much as female characters. Tezuka's female-to-male character death ratio is pretty even from what I remember. And for example the old mother in Ayako stuck around through-out the whole thing even if she had fulfilled her narrative purpose within the first few pages. What is the problem? Female characters die? So do male. At least they have a purpose beyond dying, unlike say Devilman's Sachiko and Akiko Makimura.

"Illogical characters". Can't think of any examples of this beyond characters that are meant to be either irrational or other-worldy. But real humans are often illogical anyways... though I have found the lack of clear motivation for many characters in his older stuff a bit frustrating.

Haven't really liked that much of his child stuff. I enjoyed Princess Knight (but possibly more for the stylization of the art and the blatant feminism of the second half than for the plot), Unico and what I've read of Jungle Emperor. I mainly like his adult stuff; Hi no Tori, Kirihito, Adolf and Ayako. Haven't read Dororo yet, but my boyfriend owns it.

painocus Jul 3, 2014 9:54 PM
Why are you even reading and reviewing so much Tezuka? I can't stand Shirow Masamune's writing style. The solution? I don't read any more of his stuff.

And if you insist on being a masochist can you please at-least write reviews that actually have more to say than just "I think the plot is bad" (without giving any justifications and examples) or "I don't like his style" ("too cartoony characters" and "inconsistent styles" are not legit complaints when coming from a Go Nagai fan. And I'm saying this as a Go Nagai fan).