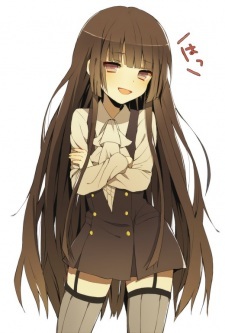 Happy new year (again) XD.... Well, actually very good... very, because of reasons... resolutions? ... I just think I have too many things to do XD

I hope you are doing well ^^

I see you havent seen its prequel handa kun......

I loved it and am considering this sequel barakamon

lengnobaka Sep 27, 2017 9:41 AM
So I watched an episode of new game and I see what you mean relating to it. So far I loveeeee hifumi lolol can't wait to see how this anime goes, seems interesting :3

Oh! Haha, my bad. Well maybe one of those scam calls was an actual win to Hawaii, you missed out sweetheart.

But I swear he talked about in all of his speeches that he was going to push on immigration laws, why would immigrants vote for that? That's the exact definition of counter productive =/

My weekend was okay thank you very much, had fun! Hows this week treating you so far? X

Very nice! That sounds very relaxing, too bad there's nothing near me. LOL...... I guess you can say I'm working on that.
My weekend was alright, made the best steak I've ever eaten though! Other than that, I worked and procrastinated this weekend and now my sleep will suffer tonight :P

I'm also pretty excited that the No Game No Life movie is coming out in theaters Oct 5th lolol! Had to rewatch some of those episodes this weekend. Have you seen the anime? :3

quintessentially Sep 24, 2017 5:44 PM
There isn't an English version of it so you'll have to read it online or buy the Japanese version
Oh. Maybe you might enjoy it once you go to season two, two and three are my favourite
It was great

lengnobaka Sep 18, 2017 8:32 PM
Well.. Dusk Maiden of Amnesia is more of a RomCom and if you're looking for that I definitely recommend that one!
Nanatsu no Taizai was really good too, a lot of action in that one! <:

Out of the two... is a really hard choice... but maybe I'd go for Dusk Maiden of Amnesia. Pretty good story line and not your typical romance anime. It plays with your emotions a bit imo :3

quintessentially Sep 18, 2017 6:17 PM
Utsuro Halo To Zero No Maria is a light novel about a guy who meets a girl then strange things start happening
It is the best light novel in my opinion so yeah, I do recommend it
I haven't watched anything for a while now, there is a ton of manga in my currently reading list that I have to finish, currently reading JoJo and I also recommend it

lengnobaka Sep 17, 2017 9:50 PM
Hello! Just happened to find my way here and noticed that you're looking for a shounen :D

Have you seen Dusk Maiden of Amnesia or Nanatsu no Taizai? I'd recommend these... they have the shounen tag c: !

I see. I once thought if it was Maria from the light novel Utsuro no Maria

I usually watch shounen. Pretty much the only genre I enjoy. I also watch action, fantasy, psychological, horror and thriller. How about you?

quintessentially Sep 17, 2017 2:48 PM
In MAL? Yeah Ron
Some people called me Rondy or Rondo
I think Velvet is a nice name

It is still Sunday here but my weekend has been great so far
Nice profile picture by the way! Know where it is from?

quintessentially Sep 17, 2017 6:18 AM
Hi um I was just going around MAL until I stumbled upon ur profile
But yeah I just wanted to say hi
How're you doing if I may ask?

Umbra_curator Sep 11, 2017 5:30 PM
I just love if you save the toast until the end so you can scoop up all that runny goodness of the bean juice and meat juice all into one, it is the goddamn best, then again Pizza probably tops it.

In C? What does that mean?
That is what I've ended up doing, so many phone calls now, people think i'm popular but no its just job centres etc.

I don't know who would of voted for him, I understand like Rednecks and such but that's still not majority, weird.

Crystal Maiden is cute! How dare you D:
She can also get a little pupper to follow her around which is most adorable thing in the world.

Yeah, mostly. There's been a few times where i drink just to stop thinking about things and stop stressing but instead i just unload all my problems on to people and then have to make up for it for like 4 weeks ^^'
All Comments