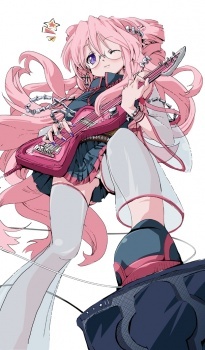 GOOD DAY FALC MEMBERS! This may be too late already but let us still greet you a BELATED HAPPY NEW YEAR, at least. We’re having our very first newsletter to start the New Year. Hoooray~ We tried our best to shorten this as much as possible. And now, first things first:

FILIPINO ANIME LOVERS CLUB (FALC)
FALC, as the name says, is a MAL club for Filipino anime lovers – pure or half – and for everyone who’s interested to know more about the Filipino culture. Visit once in a while and leave a comment here. Who knows, maybe you’ll be able to meet someone in your area who’s pretty much the same as you – one who loves anime. We would really be glad to see the club alive with your comments. Don’t forget to be friendly, ok? Also, in here, you could find different threads that may catch some of your attention.

Here's a quick guide! Just click the buttons above. Each number represents a topic in the FALC thread.

Note: For more threads other than the ones mentioned above, kindly go to this link.

Click the picture below to visit the chat. See you there~

ATTENTION: January 21-22 (Otaku Expo 2012)
Visit this site for the schedule of activities and click #7 if you want to meet other con/expo goers!

PS. There's a longer and a more explained version for this newsletter here if you ever want to see it that is HAHAHA Thank you for reading this one, btw. Have a nice day and take care minna~

&& I saw you favorite Clannad and Higurashi. I love those. Especially Clannad after story. So sad, but so beautifull.
Only, I didn't like Fuko. In her own ark, she is awesome and lovely, but after that she keeps distubing nice moments. I liked Tomoya and Kyo better.

And Ouran High. It was just amazing. I loved Tamaki. Who did you like best?

Remon Jan 29, 2010 10:47 AM
Hey there! There is a new club for the anime/movie Spirited Away. I am writing you to invite you to join because it really needs members and eventually admins.

lemonade Jan 10, 2010 9:51 PM
Lǚ Dòngbīn (呂洞賓) (spelled Lu Tung-Pin in Wade-Giles) is a historical figure and also a deity/Immortal revered by many in the Chinese culture sphere, especially by Daoists/Taoists. Lǚ Dòngbīn is one of the most widely known of the group of deities known as the Eight Immortals and considered by some to be the de facto leader. (The formal leader is more likely said to be Zhongli Quan or sometimes Iron-Crutch Li.) He is also a historical figure who was mentioned in the official history book "History of Song". Lǚ is widely considered to be one of the earliest masters of the tradition of Neidan, or Internal alchemy.

His name is Lü Yán, with Yán (巖 or 岩 or 喦) being the given name. Dòngbīn is his courtesy name. He is called Master Pure-Yang (純陽子 Chunyang Zi), and is also called Lü the Progenitor (呂祖 lü zŭ) by some Daoist, especially those of the Quanzhen School. He was born in Jingzhao Prefecture (京兆府 Jīngzhào Fŭ) around 796 C.E. during the Tang Dynasty. He is depicted in art as being dressed as a scholar and he often bears a sword on his back that dispels evil spirits.

When he was born, a fragrance allegedly filled the room. His birthday is said to be on the fourteenth day of the fourth month of the Chinese Calendar. He has been very intelligent since childhood and had many academic achievements. However, according to one story, still unmarried by the age of 20, Lü twice took the top-level civil service exam to become an government official, but did not succeed.

So, the FRIENDSHIP is twice the value of LOVE.
.. Send this to all of your friends, and me if I am one.
If you get 7 back you are LOVED!!! Here are the numbers of what
kind of friend you are based on how many you get back..