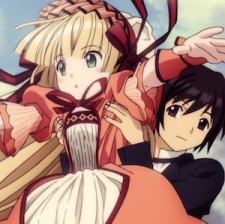 Sexyjutsu Mar 2, 2017 2:45 AM
How have you rated Nausicaa 10 but haven't seen Princess Mononoke? Dude.
Okay okay, this was me also until tonight, but considering you left a review I thought you would've been all over Miyazaki's other works.

Snowing Apr 2, 2012 9:13 PM
InnerChihiro-chan your username, is it from your favourite character? I loved Chihiro from Spirited Away, she was adorable. Man...It's been such a long time since I last saw that movie, I think I will rewatch it sometime. :)

NakkiNyan Aug 6, 2011 12:36 PM
If you are the same innerchihiro that posted on Doki there is a fix for MPlayer.

MPlayer OSX Extended just got a new binary thanks to pigoz.
Conversation :
http://forums.animesuki.com/showthread.php?p=3708593

It does not have MPlayerX's issues.

sugarspankhorn Feb 27, 2011 2:13 PM
Hello~ It's always a pleasure to meet another Miyazaki fan ^^ (And interesting to see that you're the first person I've had an extremely high anime compatability with X3)

Of the 2 arcs and Bamboo Rhapsody episode, I can't find myself interested in any of them. Even as a fan of the 1st season (one of my four "10" scorers), Endless Eight was repeatitive and boring, and it ended in a horrible manner as well. The Sigh was just as bad, if not worse. Bamboo Rhapsody was the only semi-decent episode in the 14 new episodes thus far.

There was a reason none ever showed up in the original series, it has no importance to the storyline as a whole and, if anything, it is the overemphasis on good animation and sound that is killing anime (and games) today.

However, I greatly respect the fact that you stood up for what you liked. Great job for that.

Hejin Oct 7, 2009 5:18 PM
You know, I have to say. That was a fantastic review for the second season of Haruhi. Endless Eight was a minor setback, but it wasn't enough to complete destroy the series not even the slightest. I give you a big hand for writing that review of yours. I'll still be a Haruhiist even through the thick and thin that Kyoto Animation puts us through. :D

GulfStandard Sep 23, 2009 8:55 PM
After one compensates for your average score being 1 higher than my average score, our ratings are essentially identical, I notice.
All Comments