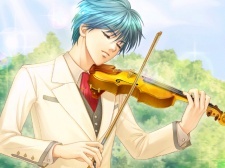 Please don't suddenly come online and reply to me.

It's been 2 years, she can't come back suddenly. That's life.

Lightskynight Dec 26, 2014 12:48 PM
Hii! I've seen "Kiniro no Corda: Primo Passo" a while ago and was checking out its profile here and saw your review. It reminded me a lot of the series and I enjoyed the read. The music was absolutely beautiful and I remember I immediately download Ave Maria violin instrumental into my ipod haha ^^.

Besides that, I also see you're a Kingdom Hearts fan! *Gasp!* ^^

Sinful-Des Jan 4, 2011 3:26 PM
(Sorry for the late reply ^^;) Thankyou! Happy New Years to you aswell~ : D and Oh? that sounds pretty awesome, and I bet it would be pretty chaotic and difficult but glad you came out in one piece~ xD that's a good thing. Relaxing around the house and hanging out with friends sounds pre awesome.

=P You should! lol. Yeah.. there coming out with some pretty different looking anime lately, it isn't as good as the older ones in my opinion. xD; The latest Anime I've watched is called "Soul Eater" xD it's somewhat older. It's a pretty good series though, though it's abit random and halloween based. lol
Things with me are going alright I suppose, been trying to look for a job and such. Been searching for one, and hanging out with people, lazing around the house like you. XD excited to see my best friend which I haven't seen in 2 months or more now, but she's coming back here for awhile. She's coming on January 9th so should be pretty awesome. :P

Just found your profile by chance and it seems you like Len from La corda d'oro... If you are a violin fan in general, I'd be very happy if you join the Violinist Association Club :)

If you do not, then sorry for disturbing you ;) and have a nice day :)

xJuliet Jul 3, 2010 6:42 AM
Hi there ;)
I'm a member or you RomeoXJuliet club and if I'm right a friend of mine (Prudence) also tried to contact you, because some members (including Me) would like to make the club more active and attractive
by making Membercards and a Lay-out. But we can not do this without permission and we cannot put up a lay-out since we do not have that rights

I hope you read and answer this, I would really appreciate it ^^
Thank you

I read your about me thing and I'm also a bl lover. And I never met anyone on MAL who I actually had a high manga compatiablity

so I just wanted to say hey

DrinkMyCrumbs Jun 26, 2009 5:14 PM
anything will do as long as i can edit some of the peoples posts, doesnt even have to be permanent, probably until i choose to close the thread.

Thank you very much

Please to meet you.

DrinkMyCrumbs Jun 7, 2009 4:32 PM
this might be too much to ask but can i have temporary admin to SnS fanclub to fix up the ID# count for requesting member cards please.

ASHGARY Jan 24, 2009 11:05 AM
-just read your review on la corda-
omg, you founded crescendo? :o
I found that site months ago, looking for Hihara related stuff, and I really have to say it helped me out O w O

I am perfectly aware that this is a useless comment, but... ^_^
lmao, hru?
All Comments