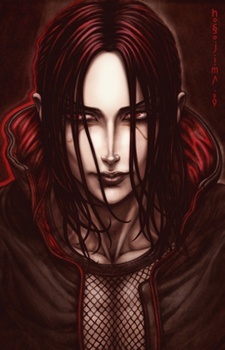 TykiTheTrickster Dec 10, 2012 3:15 PM
<,< I have to complete it cause it will nag at me, but I ve slowed down on watching new ones recently. There are a few goood series out and still a few from other seasons I need to watch and finish. Im just gonna watch the ones that catches my eye, lol.

kazrirukan Jul 25, 2012 11:35 PM
HAHA. I don't even have to worry, I never log out! LOL. Now it's just the matter of visiting. Aww! I wonder if your relatives ever feel disconnected. (x
That IS a little funny. xD I wonder if they felt miffed when you didn't show up or respond.

I just dont check MAL as much of late and same on the tabs crashing. Too much

animes and mangas I need to read and update and music. Dont feel like a jerk for

reading a message that was sent months ago >.> I kinda dont lol

I watch too many animes at once, I cant get ma minds get bored, whlle the other eps

are loading. Id watch a new eps from another anime. Keeps me from getting bored, if

I m not reading any mangas or drawing while listening to music.

lol cyber-planets eventually they would, Eventually I ll b able to catch ya too!!
--
I thought you were gonna mention the real planet alignment that recently happened.

It s been awhile since I ve seen that movie, hmm the last movies I saw were

My friend s been hooking me up on catching up on some movies I may have missed.

But, aye the planet alignment tho it only happened for a few mins or so still a

fascinating thing that happened in our life time ^_^

Mkays talk to ya later, Have a good day, mon xD

LOL sorry I can imagine it, sounds quite funny now you phrase it like that xD

Aww.. I know another mom who can't pronounce her daughter's name, so sad, though I won't compare her too much with your mom cause there's something not right with the woman I know.. >.<

I was almost gonna get named Cornelia O_O

Me? Oh well, my life is probably the most un-interesting typical teen life so you'd probably get bored of me very soon ;P
I've just been released from the evil clutches of a horrible place some people like to call school and I'm just using my summer holiday to catch up to all my animes&manga's and sort out things on MAL. Hopefully all goes well, six weeks do go by fast :(

What anime's have you been into recently?

I ve been out of commission on watching some animes >.> laptop troubles xD

Hope to chat with you sometime ^_^ or something

kazrirukan Jul 13, 2012 4:49 PM
HAHA. All my days were still spent online. Or for the most part. LOL. Just most of them weren't spent anime & social websites. (x
OH, WELL HAPPY BELATED BIRTHDAY. HAHAHA. Aww, I wonder if they were mad?

^ Hey, i just met you and this is crazy but here is my skype chat so join us maybe?

I'd be grounded for life after having ditched all together about three months of school ^^ Or just kept stuck at school.. But I'm in an opposite situation; gonna try graduating a year earlier.

I also get similar thoughts... I can't stand kids, even though it's not like I'm such a grown-up or anything. I'm younger than you are. Both my mother and grandmother have taught at school, my grandma even four languages @_@

That sounds cool, I bet that, even as a teacher, you'll find a lot of interesting/amusing/breath-taking art made by students.

Yeah I love that about animes... 'normal' people just lable it 'cartoon' and don't even think of taking a second look. Others, who like it, can go on and on and on talking about it <'3

Viking? =o I once looked it up, came from the name Katharine O.o', don't remember out of which country. *looking up* What the heck? Okay, original meaning is both in Greek and Danish 'pure' haha. And.. 'Karen is the Danish form of Katherine. Karen is also the name of the an ethnic group that lives in Eastern Myanmar and Thailand.' Weird. I'll add something to that: 'In Japanese, it can also mean 'cute'.' Lol okay sorry bad humor. Okay crap now you're talking about Gil and I went on and looked up Karen. Gil's probably from Uruguay or nearby, since that's where I was born and from that side of the family I haven't heard about any foreigners. And uhh.. so the original pronunciation from where I got it has a total different one from English xD Here: http://www.spanishdict.com/translate/gilvo I randomly looked up a word beginning with our g. And from the English version it would probably be Jiru then ^^

(Giru reminds me of Dragon Ball's Giru... And Jiru of the guy from Black Blood Brothers xD)

Haha, yeah I think it's funny too. But also cute x3
All Comments