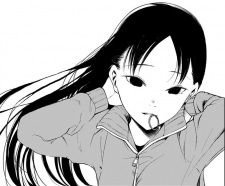 Cludensyo Jul 12, 10:33 AM
Hello, we've chatted before. I want to apologize if at any point I came across as mean or disinterested in our conversation. I was doing something at the moment. Hope you're safe and doing well.

Juanfeis Jun 26, 1:11 AM
could you provide me your kaguya avatar in hq? I'm trying to delete the dialogs in ps but i saw you did a pretty good job!

EnigmaOlivia Feb 21, 1:30 PM
They just do it and send me a lame message that they chopped it. They do not even give me the chance to make changes. Its so messed up.

EnigmaOlivia Feb 21, 2:01 AM
I apparently am so ruthless that mods are chopping and editing my review without permission. Now I have to upload them to my page. Maybe the few anime you tubers are right about this site being extremely unfair and weird.

Well animation doesn't matter much, because this isn't an action anime. It's been awhile since I've seen the anime, but the animation looked proportional and the art style is basic like every other A-1 Pictures romcoms, but I like it.

The director and the studio will remain the same, so I don't expect the second season to be worse in terms of directing and animation.

Are you going to give Kaguya 10/10 when the second season airs?

Zaro_1 Jan 5, 2:52 PM
I do like Hayasaka, but there's better characters in the anime/manga.

I'm really excited for the next season, I'm glad it's being released in spring 2020.

Main reason is Miko Iino will appear, and the arcs afterwards.

Zaro_1 Jan 4, 2:07 PM
I'm just into her type of personality, I started to like her much more in the manga and then became one of my favourites.

Miko Iino is quite similar.

Your opinions on Hayasaka?

Zaro_1 Jan 3, 4:08 PM
Well what you said about Yotsuba is what made me like her character, but I still think that's not enough for me to like her more than the other main characters.

The reason why I like Chika is because she makes me anime/manga funnier.

Your opinion on Miko Iino? I actually like her more than Kaguya at times.

Zaro_1 Jan 3, 1:48 PM
My second best is Miku, usually I'm not that into shy anime girls, but I really like her. Yeah Itsuki wasn't as developed, but I still like her. I don't know why she gets hate. Ichika actually used to be my favourite in the anime, but I started to dislike her, but her redemption made me dislike her less.

I only started to actually like Yotsuba after reading the recent chapters, but before I just thought she was an okay character, because I'm not into the energetic female characters, but Chika and Yotsuba are the likeable ones for me.

Yeah the animation was sometimes bad, but it's not that bad. I didn't really mind it being bad at times, because the plot and characters were entertaining.

Also, who's your second liked character in 5-toubun no Hanayome?

FMmatron Jan 3, 9:24 AM
I guess you got the the gist of it, so don't expect anything remotely close to the quick beatdown.

FMmatron Jan 3, 8:21 AM
It was basically an anime original fight that sacrificed the impact of Kaido's power in order to have a spectacular fight.
All Comments