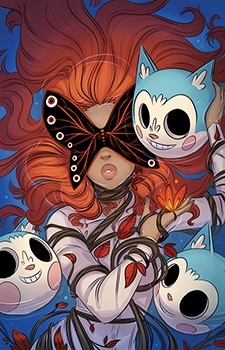 lanblade Feb 20, 2017 8:33 PM
The pattern shown is a normal distribution, which is a natural result of random variables in a population (the population here is anime as a whole). Since I have seen a significantly larger amount of anime that most people, data will naturally fall towards a normal distribution because the sample size is larger. Most people are into anime as a passing phase and watch the popular stuff like FMA, Naruto, etc. which they rate high (and are pushed by the community to watch the same high ranking shows) and then quit watching so they never really go see anything that's genuinely awful to rate a 1 or 2 or 3. The smaller the sample size, the higher probability of skewness.

My Animenfo Radio graph looks similar, I've been a member since the mid-00's and have rated thousands and thousands of songs over the years.

I don't get influence by other peoples ratings because I don't see them.
http://imgur.com/a/y074O
I'd have to scroll down to see the ratings. Look at them. Then scroll back up. Then rate.
Which is dumb and a waste of time. If the user ratings were right under the title then I might, in my peripheral vision be subconsciously influenced. I'm only human after-all.

No, you'd only have completed the hard difficulty. Think of it like a marathon. There is a prize for completing the minimum miles at the 12 mile mark, at the 24 mile mark, and at the 36 mile mark. If you run to 12 miles, congrats, you get the easy badge. But if you choose to continue running past that 12 miles and make it to 24, you now get the rarer medium badge. At the water table you give your easy badge to a staffer and they hand you a medium badge in exchange. You are only allowed to hold onto 1 badge at a time while running before stopping.
With the 2x badge, you have to gather up all the mile markers twice. That means you run the marathon to the 12 mile mark and stop (to get your 12 mile easy badge) and take a taxi back to the starting line. You re-enter the marathon and run to the 24 mile mark and stop to get the medium badge. Taxi back again and re do it to reach the 36 mile mark to get the hard badge. Yay, you now have 3 badges because you ran 3 separate races with a total of 72 miles.
Now do it again (in a new post). So you've run a total of 144 miles. Only then will you get the 2x badge.

So if you want only the hard badge then you are running the 1 marathon trading in at each marker so you only need 36 (anime titles) miles total.

>Also if I watch a special on the same day can I use them for each category of the challenge since it's not a rewatch or previously seen?

> Out of curiosity why do you believe that Haruhi Suzumiya is academically strong?
The anime is based on the light novel. It was a revolutionary piece of literature that shifted what the industry once the anime came out. LNs were seldom adapted here and there. After the show's release there was a big boom for anime studios to start scrounging through LNs magazines to find new works to adapt and there was a big boom for people to start writing LNs (because of their style, even amateurs could write them). But most of all, it provided a blueprint on how to adapt LNs that’s still used today.

Haruhi was also a parody of LNs before its time (and subsequent LN adaptations). Most of them were trying hard to be mysterious, dark, spooky, with characters that had chuunibyou-level plot armor. Even though it's a parody, it still delivers itself as the exact thing it was parodying. In Haruhi we do have mysteries, dark moments, and spooky shit along with characters that have chuunibyou-level plot armor (espers, time travelers, gods, etc.). It's bloody brilliant, the best real-world example I can give is The Daily Show of Jon Stewart and The Colbert Report. They were parodying new shows yet still delivered some news in the same outlandishness of real news shows.
While Haruhi parodies a lot, it also gives pastiches as well. Pandering to the core of the target audience of otakus, it knew what to sell (that Genshiken failed at) and started shaping future anime (hence we why have so many otaku anime that are aimed at wish fulfillment or self-insertion with the right formula).
And of course we can't talk about Haruhi without its airing order. Due to the order of the LNs the anime opted to air out of chronological order to provide a climax at the end while allowing a full expansion of characterization. Just like with Harry Potter--the target audience of the books is different than the target audience of the movies. There will be a lot of overlap but you cannot just do a 1 to 1 without having something suffer. Earlier anime tried to do this in order to please the original readers but this busted the flood gate into a whole different territory.

Also to note, Haruhi's anime came out in 2006. It had an extremely high production value because the year before was a high earning year so there was a lot of surplus $$$ to spend on 2006 anime. But the end of 2006 was when the bubble burst and sent economies all over the world into the shit including Japan including the anime entertainment industry. 2006 anime were plenty but didn't provide that much profit for 2007. But Haruhi’s did. And continued providing an intense level of profit to KyoAni which helped shape the studio to where it is now. Without all that $$$$ they couldn’t have invested in future anime like they do now. They spent more time on anime because they weren’t on the verge of bankruptcy from 1 bad show like most other studios. They paid their animators more so they in turn animated better. They even hired more experimental directors and female directors to provide new insight on shows (Naoko Yamada was one of these. KyoAni was able to support the insecurity of hiring a 25 year old girl to direct a show who’s never directed anything before. Do you know what that show was? K-ON. KyoAni was drowning in money from that move.) Competition is good because fellow studios which animated in a similar fashion to KyoAni were now trying to play catch up (economics game theory) which causes a ripple effect in the whole industry.

Haruhi ended up becoming a golden idol, it was made in the perfect storm leaving everyone wanting more. Chasing it to achieve the same greatness.

MuFeR Dec 24, 2016 10:02 AM
I can read Japanese (not perfectly) so I didn't find it translated. On the website I'm reading them only the first chapter is in English as well so I guess the rest aren't translated yet.

lanblade Dec 7, 2016 9:03 PM
>do I just go and grab the badge image from the thread the challenge was posted in, or do I have to message mod to get it sent to me or something?

You can just grab a badge. I would personally wait till a mod edits your turn-in post with a "Added" before taking a badge though. That way it's confirmed by them that you did all the requirements and you've been added to their spreadsheet. Otherwise you get an "Invalid" stamped on it and summoned to the rejection thread where they say what you did wrong so that you can get your turn-in fixed (which sometimes happens if you take too long and an anime changes its genre or the type was corrected from MAL's database mods).

>Also which one do I choose? Is it personal preference?

You can only choose one that's at the level you did the challenge at. If you completed the Easy level (requires only 20 series) then you can only select one of the two Easy completed badges (Danshi Nichijou or One Piece on the left). The x2 Easy badge on the bottom with Maid-sama explains how to get that one in grey which means for that specific one you'd need to have seen (20+40+60)+20=140 items. So if you did the easy level already you'd just need to watch the medium 40, the hard 60, and then another easy 20 to finally get that badge.

At a later time you can upgrade your normal easy badge. Say you watch an additional 20 Comedy shows that fulfill 20 of the other requirements (you can't do any of the same ones you already did, and you can edit the same post that had your original 20). So now you've got 40 Comedy anime with 40 unique requirements. Then you do another turn-in requesting as such and once a mod confirms you can swap your completed badge for one of the two Medium badges they have.

Kreyul Dec 1, 2016 5:58 AM
No worries, your comedy challenge has been checked and added to the HoF in the last batch of updates. If you re-turn in an entry and don't get another notification from me, that means that your challenge is resolved and all set. (:

lanblade Jun 12, 2016 8:39 PM
>Seems like I get the point of the whole thing but just to be sure if I wanted to do the fate challenge i'd just have to watch all the anime listed in the thread correct?

Yup, you'd have to watch all the anime listed in the 1st post of the thread. If there is a Bonus area (like in the Tenchi Muyou one) then the bonus stuff is optional, they are not required and not a part of the final count.

>Also I know you have to submit it when you're done but how would they know i'm participating in the challenge?

You can post in the thread of the specific challenge and update it as you go.
But if you're like me, I only post when I'm done b/c it's easier to keep track in an Excel spreadsheet than bookmarking a whole bunch of thread posts and editing them.
The admins of the club actually go and check your Anime History and list to make sure you have each title on there. They also check the frequency of completion to know if you cheat.

lanblade Jun 12, 2016 5:09 PM
It's from this club: http://myanimelist.net/clubs.php?cid=70446
riho88riho invited me, she has done a really good job at making challenges and creating badges. It's really exploded over the last few months and club members and pitch their ideas for a challenge too (I'm the one thought up the Ultimate Challenge--it's so Ultimate I haven't even achieved it). It's pretty cool since you can choose how you want to do things. I'm going for a "find anime I haven't watched" route for challenges since for a lot of them you can fill it out with previously seen items (like the Aired 20XX challenges) but I want to see how much I can achieve with new material. There are two challenges that have a limited time frame right now and it's the June 2016 Challenge and the Treasure Hunt SH #01 Challenge. Other challenges will grow because they are creator based so things like the Kyoto Animation Challenge will become harder over time since they make new anime.