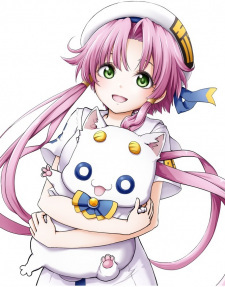 bunziie Jul 2, 6:40 AM
Thank you for accepting my friend request ♥

DoomSlayer0 Jun 2, 9:25 AM
Hello there ^_^
Thanks for accepting my friend request.

Dask Aug 15, 2018 5:54 PM
How is Steins;Gate 0? I'm putting it off until its finished because I hate cliffhangers, but do you think it is as good as the first one? I feel like another season was completely unnecessary lol

Dask Aug 26, 2017 6:05 AM
Hey! I was wondering if there are any anime that aired in the past few years that you would recommend. Anything that stood out above the rest. I haven't been following new releases or updating my list here for quite a while, like two years, so I'm trying to catch up on the good stuff I've missed! Any suggestions?

chaosflame5 Oct 31, 2015 3:52 AM
Hey ^^ Long time no chat, 3 years I think. Y!A s really losing the charm right? They have degraded so much since they changed the site design and nowadays I see more troll questions and spam ones than decent questions about anime. More people are now asking about Western animations than Japanese anime, which for me are hard to answer as I'm no fan of Western animation these days except maybe the old Tom and Jerry, Looney Tunes and the old episodes of Spongebob, lol. The site sure is dying imo.
And seems like I didn't reply to your comment from 2012 lol, sorry about that xD Must have missed it somehow.

WaqasJani Jul 16, 2015 9:53 AM
Yes I have often stumbled upon such lists. It's just thing is most of them are consistent of OVAs or odd titles(not that it's bad thing). I mean yours one pretty much sum all the popular ones or the titles at least I have heard of.

It's nice to know you've been active in the medium. :)


IF THIS SOUND GOOD TO YOU , THEN PLEASE PRESS ON THE PICTURE
& JOIN US , START SPARKLING OuOﾉ*:・ﾟ✧・ﾟ:*

Hope to see you sometimes Sparkling In Our sky !
Have a Nice day / night! (〜￣▽￣)〜

Sorry for the late reply I just got back from China/Japan like a week ago. My body is still not used to the time here in North America and I sprained my foot *attempting* to climb Mt. Fuji and carrying luggage (sigh) so I'm stuck at home until I can walk properly X_X. If you like hiking and climbing mountains though I definitely recommend China. Saw some of the best scenery in my life there.

I definitely think Chihiro is a good match for him seeing how she liked him from the start without him doing anything lol.

Me too! I remember they announced it was going to be released in 2013 and now we had to wait a year for it. I'll admit I haven't actually even watched one episode yet because of travelling but I'll get started once I settle back down. Yea even some of my non-anime friends are commenting about it because of nostalgia LOL it'll definitely be successful for sure. How are you enjoying it so far?

I think the art is pretty good in terms of style (def "improved" in quality) but I think I got used to Sailor Moon in the 90s style of animation so I can't really associate 2010s style animation with Sailor Moon. Apparently the Sailor Moon Crystal art is more faithful to the manga but I haven't read the manga so I can't attest to that.

Winter_Fox_Tami Aug 20, 2014 2:51 PM
Alright, so I started having a plethora of glitches on my profile, so I decided to start a new one again. I wasn't planning to start another one, but the glitches just got too frustrating. Starting a new profile seems to have resolved them, so add me back again. Hopefully this will be my last one.

I haven't watched any of my Summer shows in a couple of weeks because I've been obsessed with Hajime no Ippo and am trying to finish it. I'll go through a few days next week or something where I watch all the Summer episodes I'm behind on. The only two I'm 100% caught up on are Space☆Dandy II and Hanayamata, I ordered the Hanayamata manga from cdjapan.

Regarding Barakamon, the essence of the manga is this story of how Handa moves to the island and is dismissive and condescending to all these rural people whom he sees as below his status, but after spending time there he starts to learn that they're no less intelligent than him just because they've chosen a less flamboyant way of life, and he realizes that many of them have found a contentment that's eluded him. It's an ensemble character study about the experience of rustic life, and every person he meets is extremely important in a way that they just aren't in the anime. One of the biggest problems is that the show's main focus seems to be how adorable Naru is, and that's what they've chosen as their selling point, when that's not the main focus of the manga at all. They're trying to make Naru super kawaii and her entire personality has become hyperbolic, whereas in the manga, while she's still energetic and strange, she's closer to acting like a real child. Their relationship is important, but it's not the main point of the story, it's a secondary plotline which the anime has expanded and turned into the main plotline, so the actual main plot isn't getting the development it deserves. I encourage you to read the manga, it's far better.
All Comments