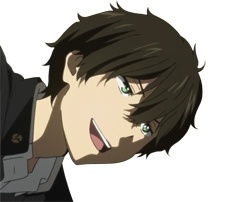 www.youtube.com
For IM purposes I use skype, if you want to contact me for some reason PM me on MAL.

SpaghettiSpike Oct 3, 2017 11:53 AM
I read your review of Digital Juice and although I mostly disagree with it, the detective searching persona 3 lyrics got me good so you got an upvote :D

AnimeWatcher69 Jan 2, 2016 8:41 AM
Although I don't necessarily agree with your Hajime no Ippo review, I enjoyed how u expressed your opinion.

NavyCherub Aug 8, 2015 2:26 PM
Hey wow, thanks for the very nice comment. I agree that it isn't quite as good as you might come to believe from what people say about it, and I think that might come down to its age and length. A lot of people probably had their first experience watching a sports anime with Hajime no Ippo, and it is a pretty simple show which makes it accessible too, so there is some nostalgia there. It is also long, so unlike maybe a one cour show with a similar premise, by the end you've spent so much time with the characters that it is easy to become very attached to them. It is definitely not an awful show, but it is flawed in simple and repetitive ways.

If you plan on continuing with the show, it is worth mentioning that the problem of Ippo getting the focus all the time kind of goes away because he is suddenly not in many fights after Champion Road. Even if you aren't, I still actually really recommend Mashiba vs Kimura, since it isn't much of a time investment and it is actually pretty dang good I think.

5camp Aug 10, 2014 5:15 AM
Hmmm, I've gone back and forth on this, but honestly I'd say skip episode 1. I can see why it's there, but it's a poor episode and not a proper reflection of the story and also kinda spoils the ending for the whole show. All you need to know that episode 1 tells you is that yo demons are gonna show up in Berserk at some point.

Veronin Dec 21, 2013 6:36 PM
I'm not caught up yet, but I'm really liking it so far. It's like a cross between Gurren Lagann and Gunbuster. Probably not as good as White Album 2, Genshiken Nidaime, Uchouten Kazoku etc. but it's still one of the best anime this year.

Veronin Nov 24, 2013 11:11 PM
Glad to hear that. Touch is a wonderful anime so I'd strongly recommend it whenever you find the time (it's pretty long).

I guess I got tired of the 4chan attitude. All the posts there seem to be more about internet memes and "who best gurl this season??" so there's not really any place for me there. Also I don't feel like being told to kill myself three times a day.

IdleSheep Sep 28, 2013 1:42 PM
I'll admit I should use the rating system better but to me 6/10 is not really enjoyable, just watcheable, I apologize if it offends you in any way but that's how I feel, but considering the 9/10 is "great" I don't really know if this rating system is trustworthy, to me only the review itself is explanatory not the rating sum up. And as i stated in the beginning of that review i'm a very tolerable person.