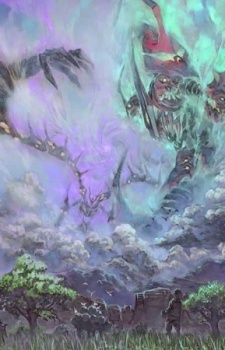 I'm glad you found Best Buy to be accommodating though! That's where I bought Welcome to the NHK and Fruits Basket, and almost bought Kodocha.

If you're gonna buy from Amazon, just remember: The sky is the limit!

Let me know what you got/are going to get!

If I was gonna mention names, try Wal-Mart(they got some of the "popular" titles like FMA, DBZ, and a few surprises)
Best Buy is probably your best bet(no pun intended). Their anime section has supposedly gone down, but if it's a big city, then that shouldn't matter.
Target sounds like something worth mentioning... but you should no more than Wal-Mart. But you could get surprised!

Another store that, I don't know if Miami has or not, is Hastings! They have a NICE selection of most forms of entertainment.
Of course... this is based on the one I went to.

Lastly, just buy your stuff online. Don't know how long you plan to stay, but if it's within 1.5-2 weeks, make your selections now.
Trusted online retailers are Amazon and Right Stuf.

Otaking09 Sep 21, 2010 8:14 AM
I find it SOOOO funny because Air will always be one of the most special experiences in my anime life.
Kanon, while quite good and having enough differences, wasn't as emotional or as twisty.

Clannad started off, honestly, not too bad. They introduced things simply enough; characters, their antics, their goals(some had... IMO weak ones), and the.... magical part of it.
Then it nicely transitioned into Fuko's arc. Her story was told emotionally, wonderfully, and with a sense of "right" to it all. After her arc was over, I was convinced that Clannad would be a worthy title.... spoke too soon.

The next character Kotomi felt SOOOO detached and cold in caparison to Fuko. She didn't really have a goal, and her ending conclusion came off as a little TOO fantastic. Ryou.... has got to be one of the crappiest, most annoying characters I've seen in this type of show. Not only was she very unlikeable, she was VIOLENT! A no-no in my book for a moe series like this.
I found myself quickly rethinking what I said about Clannad being special...

Tomoyo(girl) wasn't a bad character as far as personality, her violence was a downside, but her goal was steady. Due to it being shorter than all the rest, I couldn't really call her arc a "redeeming" factor.
At this point we realize(as if we didn't know...) that Tomoyo(boy) loves Nagisa. Now... I wouldn't usually be so against this, but his realization came from, what seemed like pity and from getting used to hold her hand. i.e. she had no REAL strength. Saying she want's to be like the Dango's and that she wants to put on a play was never supposed to feel this aggravating!

The end managed to keep things within reason, and I felt disappointed in how they left things...
At this point I realized that After Story was NOT a story AFTER the events from the video game, it's a continuation.

After Story, started of by pissing me off, with a good waste of episodes going all the way to ep 8-9.
Things went into more.... untouched territory. Nagisa still treated things with a childlike nature, but her lifestyle with Tomoyo was sweet and a little embracing.
Of course, having seen the previous Key series, I was obviously expecting THAT to happen. It was sad, don't get me wrong, but it's manner of happening was not very... effective.
Now...... Tomoyo's time with his daughter? That I give a 10. VERY, VERY good stuff!!! And they made it EVEN better by adding his dad into the mixture! I was looking forward to giving After Story a 9!
Then.... they have to employ the magical element like they did.... It created one of the most abusive ending's I've ever seen.
Having started off rocky and pointless, into shaky but effective, to TRULY magnificent and warm, to a.... cop-out.
I had to give it a 7.

Sorry to talk so much. But... that's how I saw things.

Personally, I think the only reason I didn't care for After Story, was that I found it TOO predictable. Not only that, but I utterly despised the ending, in addition, Nagisa and Tomoyo's relations weren't exactly.... natural. In fact, besides Fuko, Sunohara and maybe Nagisa's parents and Tomoyo's dad, I didn't find the cast very compelling!

I agree with your "tastes" statement. Though I don't think comparing Monster and Naruto was a good idea.

It could simply be that the reason I dislike Clannad is that I have seen a romantic drama that exceeded anything I've seen before(Koi Kaze). Plus with the fact the makers, Key, tend to make things that follow patterns. I've seen Air and Kanon before so.... the pattern is grilled into my head.

I've said this already but Thank You. You've helped me in some ways.