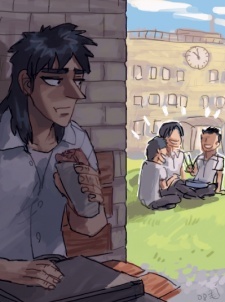 Oh, Spring is a season of hype. And yes, I'm looking out for a more than a dozen of shows. I might actually end up watching almost everything spring has to offer! On paper, it looks like a very successful season.

karlstein12 Mar 6, 2016 7:44 PM
I'm enjoying the show as well, absolutely. I've been enjoying it from episode 1. I just don't think that it's a show that's worth of a top 10, that's it. I still rate it an 8/10. The ending will be important, as I tend to easily change my mind over an anime whose ending is brilliant.

Yeah there's no doubt that this show is already up there a contender of AOTS.

karlstein12 Feb 15, 2016 9:26 PM
I've seen all the six episodes that have aired so far. It's pretty good, greatly executed and has a nice recipe for being a mystery anime. However as most on MAL see it, I think the rating that's been given now is quite overrating the show. The story is mostly predictable in the early episodes but again, its the execution of the episodes that's really making this show stand out. I'm looking forward to how it ends. Currently with six episodes watched, I'd rate it an 8/10.

And I see you're watching The Perfect Insider, too. It was a noitaminA mystery show as well of the previous season. That one though, ironically, is underrated here.

Paingwen Feb 7, 2016 3:23 PM
Yea, when they're in the robes I think Papa II looks better than three but I do like Papa III's appearance when he's dressed like this

I didn't even think of making list style with them as the theme...that's a really good idea. I'll have to see what I can do when I get free time from college work.

Paingwen Feb 7, 2016 12:17 PM
Thanks! I absolutely love the band and just recently switched my profile to it. I kinda want to make it more detailed with an actual description and stuff, but i'm also real lazy when it comes to making profiles :x

SoulInquisitor Jan 28, 2016 12:41 AM
I think a point that makes you like more the 2nd Season of Jojo Stardust Crusaders is because there are 2 "Players" in him, that reminds you Kaiji haha :D

getterguts Mar 1, 2013 9:15 PM
I like it but I'm kind of tired of the book portion taking so long. It's just frustrating in general waiting on new chapters though. Fukumoto pacing is great for marathons but it can be tough at one chapter a week.

Oh and you should check out Berserk and Hunter x Hunter some time. I thought those manga were really great.

getterguts Feb 18, 2013 9:13 PM
It's a lot like Kaiji, but Zero is more of a genius character like Akagi. It focuses on gambling and Zero psychologically outwitting his opponents.

Akagi is pretty far ahead of where the anime left off even with what's just been scanlated so far. Kurosawa is more of a slice of life about a construction worker, it's hilarious and touching though. I loved Ten because Ten, Hiroyuki and old Akagi especially are great. Akagi becomes much more human and gets a lot of character development in Ten. Confession is also really good, which is a one shot about a murder mystery type thing.

getterguts Feb 18, 2013 4:28 PM
Yeah, I would like to read it too. I'm mainly waiting on them to get some more Akagi translated, they are a 9 volumes or so behind. I think Ten was probably my favorite FKMT, but I really liked Akagi, Kaiji, and Kurosawa. Zero is pretty good too, kind of like a shonen Kaiji.