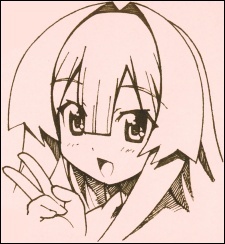 bleachman99 Jul 13, 2011 3:35 PM
hey man i know this is going to sounded weird and all but i was on updating my list of anime i wanted to ask u if i know u dont need to but if u can watch some of my youtube videos i know this is wierd but this would help me thanks for the help if u could and sorry this is not spam i just want these videos to be views that all http://www.youtube.com/my_videos?sf=viewcount&sa=0
thanks for the help! oh and i feel this is the fastest way to get more views thanks?

The whole thing with all the Yuusha and the Genesic GaoGaiGar was just awesome. The last episode was everything that I could have hoped for.

And that ending. They could only send Mamoru and the other kid home. They all sacrificed themselves so that everyone else could live happily. I was hoping for a Gunbuster-style ending where they return years later but T_T

Sakaku Apr 29, 2011 7:43 AM
Have to agree, but Rachel seems unhappy in Platinums clothes D: But Gii as the bell is LOL. *wonders what happened with Nago*

Sakaku Apr 28, 2011 12:09 PM
You have Rachel AND Presea in your favourites? You are my hero.
And Platinum in Rachel's costume is pretty cute.

DrewTheDude Dec 20, 2010 5:49 AM
Well gee, if you going outside makes you sick then you're pretty damn prone to a lot of things.
All Comments