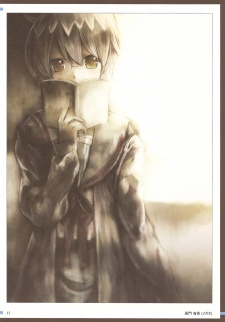 Mirinee Sep 7, 2013 3:33 PM
Hooray, you 've watched Steins Gate too! Glad to see you didn't hate it as I am currently extremely obsessed :D ! ... Oh yeah, 'hi!!' I came to update myanimelist and just happened to click your list! Woo! You 've watched Mirainikki that I 've recently watched too. I 'd forgotten how much I miss anime !!! <3

link9us Mar 3, 2012 2:14 AM
Im watching "fantastic Children" and though i love the series, but my god is it a complex show. Lots of mysteries and un answered questions. I like how the plot is given to you piece by peice, but i swear some episodes are like "brain overload" lol i just hope they actually resolve everything by the end of the series, so far im on like episode 8, i just watched "the children of befort" episode.

If i watch it and still am a bit confused, i may ask you some questions later on if you still remember the series. In fact i have one now. This guy named Cooks, who was an investigator mentions that he found evidence of the 5 white haired children in different time frames dating back 500 years ago. Now my question is how is this guy able to actually witness events in those time periods, he would have to live to be over 500 years old.

Did his scientist invent some kind of time travel or something, anyways im so confused on this show and i think i may have to re watch some of the earler episdoes to really under stand as the plot progresses and starts answering some of the more important questions.

But i like that in a series that really makes you think and annylize every bit of info to try and solve the mystery. Series like that, if they are executed in the right way usually turn out to be nothing short of a masterpiece.

Zeino Nov 22, 2008 6:23 AM
Great job for doing "SETSUNA F. SEIEI: The Owner's Guide and Maintenance Manual"!! I loled so much thx for it! :D
I so want for other meisters also :D Especially Tieria but you're the one doing it I wont complain over it! :D