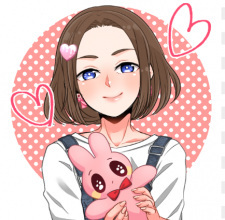 and also... I stumbled across your profile and found that one of your favorite character is the captain's younger brother haha. He's definitely one of the funnier characters in anime

InfamousOtaku Nov 25, 2012 4:34 PM
I use kagero trying make another deck , and its ok , u actually the first female I know tht plays

IAREESS Jan 20, 2010 10:58 AM
nice to meet you too
my friend whiplash is also in braintree :)
i was kinda cruising his profile looking through his list and saw someone with a high compatibility rate to him, i hope u dnt mind me loookin at ur list, it can help me decide what to wach next etc etc Please save and host the card on your own Photobucket, etc.

gnomeybum Nov 8, 2009 8:14 PM
Aha, yeah, I mean, it wasn't SO bad really. I mean, I really wanted to see Frank, buit in the long run, it was pretty funny that out of the four of us, only 1/4 of the group actually managed to make it to the concert! Hahaha, still, there'll be other concerts. It'll be great, we'll all go! What're you designing for him? The 'We're definitely going to hell, but we'll have all the best stories to tell' one? I know he wanted those words on him somewhere... Did you see his lizard tattoo? It's pretty cool.

How come college has been so heavy recently? Has there just been an uber influx of essays or something?

Yeah, Noodles got deferred a year because she mis-sent her end of year essay in so they didn't get it til after the date it was meant to be in, so they've told her she can go back next year but she has to wait til then :( Sucks, totally.

Ohhhh, so they aren't all going to live together when they move out? That sucks kinda :( I guess there's gotta be a time when you all move out though, can't be flatmates for the rest of your lives. I can't stand the idea of not living with my girls though (well, except that once I move out of uni, I'll be moving in with Tom ^_^). Awwww, Kieran's so romantic though! I love the fact that he's pretty much said there's a chance you'll get your own place together, that is SO cute. We're growing up Ellesbeth! Have you notcied? It's like, if we were in high school and we were like 'oh yah, imma move in with my boyfriend' it'd be like, 'wtf shut up' but now we're grown up and moving in with people and being like real people! It makes me fear :( Srsly though, you get a house and I'll be there visiting constantly ^_^ Also, I already have my cosplay for next expo! I'm actually gonna go this time, I have decided! I'm going as Rangiku Matsumoto from Bleach, check it out.

Pfft, I totally don't get it. I could seriously never behave that way towards someone, no matter what my reasons. Saying that though, I'm still friends with 95% of the people I was in my first year of primary with... I seriously just don't give up friends, haha! Make friends with me and you're stuck with me! Seriously though, I've said this the whole time, but I think the only real, sense-making explanation is that you got Kieran, became happy and gave her less attention. Full stop. No excuse for it man, it's not fair, and you don't deserve to be treated that way. It's just a shame... I really liked her :( What was this drama anyway?

Haha, I can guarantee that Tom won't have an inkling of what he's getting me til about a week before christmas, hurr. I think I'm gonna get him something to wear, like a shirt maybe... I wanna get him a casual waistcoat at some point. I love my Tommy in a waistcoat ^_^ I also wanna get him something he can use at uni, so I'm probs gonna do what I normally do and get him like, one big thing, a couple of medium things and some silly little things. That way, I know I've got him at least one thing he likes! Thing is, his birthday is so close to Christmas (January 2nd), that I have to think up two lots of good presents! It's very frustrating -_-

BTW, I love House, so that is a good choice!

Dude, I just started Lucky Star. They've been talking about different ways of eating certain food for about seven minutes... And yet I'm enjoying it immensely ^_^