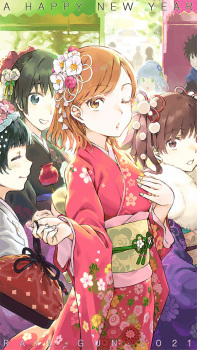 LoomyTheBrew Aug 28, 2016 10:06 PM
Just wanted to say that you gave a great Re:Zero review. Short and to the point, and also really pointing out the nonsense of the haters' "arguments". Good stuff.

zal Jul 28, 2016 7:12 AM
Given the amount of positive Re:Zero has it seems quite pointless to me if that was your only purpose.

zal Jul 28, 2016 6:51 AM
But didn't you say that the fact that Rem isn't really a nobody, because she is a servant of Roswaal and is therefore linked to Emilia, would make her report more believable than some random guy?
True, lol. What would happen if the being anonymous issue was addressed is not that relevant since the issue is not addressed. Maybe the candidate would help or not but it is kinda overthinking it since there's too much speculation and possibilities involved. She didn't tell that they didn't believe her because they didn't know who she was and here is the problem. The soldiers didn't refuse to help because of her but just because of the many fake reports, at least from what is said.

Yeah, i feel you but I do think that if you watch it passively, not paying too much attention, you'll find flaws that most of the times aren't (don't think it's your case, I mean I got the" Rem going to the guards" wrong when I've watched all episodes twice -.-)
That's also one of the purposes of the discussion thread. You make questions and some will try to explain in case there is an explanation.

I feel like the issue is simple enough to give a simple excuse. They want help on a future attack with no proof, the army refuses due to false reports (and this one seems like one, bc no proof). Moving soldiers for no reason seems like a good motivation for the army to not do anything, and even if this motivation isn't said out loud, it just seems obvious enough. And as you say, it's not a big thing anyway.
Sure but the presentation is silly to me: "We receive a lot of fake reports so we give up on them" quickly dismissing the issue.

Eh it is quite clear that you are not used to the forums but it is normal with popular shows. However the excessive amount of hate is in your eyes since you are a big fan of it while for me it receives an excessive amount of praise, a matter of perspective. Also I've read your review about it and it is sure not as objective as you claim it to be and focus too much on the opinion of the haters. Despite the fact that I can agree with Subaru being human he lacks consistency. However I am telling you right now that the review will be deleted by the mods when the show finishes unless you drop the anime.

zal Jul 28, 2016 5:38 AM
But if you get in her shoes, sending her right hand to guarantee for Rem would put her reputation in danger if she makes part of the army move for no reason (because she thinks Subaru isn't lying, but she still doubts him). If the army gets there and nothing happens (which is what she assumes most likely), she'll take a big part of the blame. She also thinks that a lord that can't protect his lands and people isn't worth helping/saving, she won't do anything for sure.
Doesn't really matter since they didn't think about that. My example was to point out that Rem being anonymous is not really the issue here. That is not the reason they don't try to help at least from what we know and saying it is seems like made up excuses without some basis from the anime.


Also, if Rem would have gone to the soldiers to ask for help for an event that is yet to happen with no proof whatsoever, everyone would have said that it is stupid and that it'd make no sense (which is true)
I just rewatched it, and yes it is. mb ^^ I thought Rem assumed the guards wouldn't believe her because she knew that a lot of false reports were brought to the guard. Although, that means that she went there without knowing that, but it is still stupid and naïve to go there and ask for help with no solid proof, but she did so on Subaru's demand and I guess she doesn't think straight when it comes to him, but it just feels like an excuse tbh ^^.
The fanboism is strong here :D
I don't blame her that she went there nor the army for not helping but the excuse is poorly elaborated and seems unnecessarily simplistic to me when there could've been some more reasonable motivations for the army. Not a big thing, just a nitpick. Another amusing thing is seeing fanboys that defend to death shows even when it is not necessary.


I don't think it is the case here, i mean at least for the example I gave, I wouldn't call that a gap, the information is there, just not "exposed" which to me is what implicit means.
I was referring to you comment to Cejara and referring to your phrase "The viewer has some work to do when watching this show." because when the fans have to fill the gaps without hints from the show that is not implicit nor subtle but just gaps filled with empty speculation and excuses. Also "nothing is explained"? Not really, a lot of things are explained. The show is even self aware that during the coronation explaining how it works is an info dump and they make a joke out of it, which was nice.

Kurosakimaru Jul 16, 2016 2:43 PM
Ya now that you explain it I understand where you are coming from. I like Originalkimichi's review; however, I do think he's a bit harsh overall. I think after you 50 or so more anime you will begin to see your taste change. It happen to me. Now I have rewatch some of my favorite anime I can see some of the flaws and things that I don't like as much, but that still doesn't stop be from enjoying anime. At the end of the day I think that everyone should enjoy anime even if it's not the great thing ever written.

Kurosakimaru Jul 16, 2016 1:21 AM
Alright I agreee that rating the show a 1 or 2 is just trying to hard, but overall if they make good points then i can't fault them. Idk wish reviews you are reading but majority of the reviews are 7 in over. The writing itself is not that good but not terrible either.

I haven't read many bad reviews on this show, but the few I do read makes a lot of great points. Example of a good review would be originalkimchi's review. I think some hate comes from the popularity, but not all of it. Just look at who's giving it low rates. We typically have watched over 100 anime, so this anime just doesn't stand out and is kinda mediocre when you think about it. I get your point it just came off as a bit arrogant at first.

P.S. I don't watch GOT lmao, not because it's popular, but simply because I'm too behind and I don't feel like binge watching to catch up.

Kurosakimaru Jul 15, 2016 1:26 PM
You're basically saying that if a person doesn't give this show a perfect 10, then that's because that person is trying to be different.

This is your opening paragraph to your review...lolzz

WhatTheHao Jul 4, 2016 2:31 AM
Your Re:Zero review was insanely good, I´m glad that someone feels exactly the same way about Re:Zero as i do!!
Keep going!

xevile Jul 1, 2016 7:33 PM
Great review on Re:Zero. Seeing as a lot of bashing and low or mediocre ratings are being given just to be different. However episode 13 was a mixed bag for me. Way too much character change in a short amount of time. I just hope this experience kills that always happy and obnoxious attitude of his, it's the only thing I hate in the anime so far.

jc9622 Jun 29, 2016 11:35 AM
LBi said:
When an anime such as Re:Zero reaches top50 within its first 10 episodes, you will see a lot of people that will talk sh*t about it just to be different.
I completely agree and ever since Ep. 13, people are now starting to jump on the hate bandwagon just because they can't handle a protagonist with actual flaws
All Comments