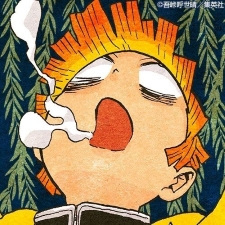 Dokubachi Sep 5, 1:43 AM
A part of me always dwells within yer anus, my son. Fear of abandonment is unnecessary.

345EdwardElric Jul 30, 4:07 AM
I kind of felt the same kind of burn out of anime as of recently too lol but Odd Taxi actually got be back to the groove again. It's was truly unique & spectacular for me, unlike anything else I've seen before.

Duchei Jul 30, 4:00 AM
Not sure, to be honest I haven't had the time to watch very anime, so I have no idea which characters are considered new and which aren't. But an anime I've been watching recently (that's new) is Gokushufudou. Besides Tatsu , Gin the cat is a pretty cute character, he's even got his own funny little shorts at the end of each episode. Gokushufudou as a whole isn't remarkable/complicated or anything but it's pretty enjoyable as a simple slice of life. Also, the situations Tatsu finds himself in as being an ex-mafia boss are interesting.

Forgive me if this was a bit too long, haha

Duchei Jul 30, 3:47 AM
Oh I see haha, no harm done. This site doesn't seem that dead to me tbh, the forum games are pretty fun lol. I've been enjoying my time on MAL so far, actually. Thx for the welcome!

345EdwardElric Jul 30, 3:44 AM
Haven't seen any seasonals from the current season yet, but the previous season, a.k.a. Spring 2021 seasonals were pretty damn great, with so many great shows like 86, Vivy, Shadows House & Odd Taxi.
All Comments