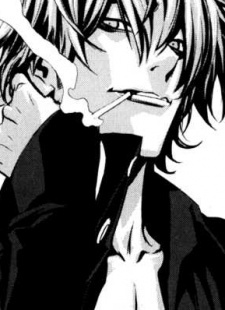 XDKeriDX Dec 8, 2012 10:53 AM
Tu che my eternal rival, however, though you may have beaten me on the P2R however, the time I have spent on manga has far succeeded yours. LOL

XDKeriDX Jul 19, 2012 12:25 AM
Wow its been forever since i sent a message to ypu on mal! Wheres ypur dp from? I cant type properly on this phone. Anyway, check out our compatability it seems to have decreased. Consiserinf we both end up recommending each others watcjing list. I would blame yaoi but it seems our manga compat is higher than the anime.

pirosith Jan 24, 2012 11:35 AM
Thanks for the indirect recommendation! I saw Chi's Sweet Home on your favorites list and decided to give it a try. Its really sweet and funny! I'm thinking that I'm going to buy the manga for my younger siblings now.

XDKeriDX Aug 5, 2011 1:28 PM
ive just realised that you could have just put when are you next off work, without the keeping it short ect, as that would have kept it short anyway lol

XDKeriDX Mar 28, 2011 10:00 AM
MWAHAHAHAHAHAHAA you'll never catch up with my anime/manga time *insert imaginary evil face here* LOL n early finished xxxholic XDDD .......but that means i have to start tsubasa chronicles after >.>

XDKeriDX Feb 23, 2011 8:00 AM
wow we haven't hadmuch dream talk lately, actually ive had some fun dreams.....the last dream i had, i was searching for someone, in a huge mansion, full of zombies with my friend a great dane, who is silky red colour, called rubarb, very friendly, and helped with escaping from zombies. pretty good dream. I didn't find who i was looking for but i found a really pretty black and gold rattle locket that played an amazing tune.

ohhhhh noooo i got started on dreams.....can't stop me now >.>:
before that dream (same morning) i had a dream of entering a village full of monsters, i wasscared at first but they were really welcoming, and friendly, seriously!! very nice village with daisies :D

and the night before i had a dream where i was flying with my other great bird friend Falco, a huge falcon i think >.> i presume so....anyway we were flying around and found a kind of indian village on the coast in between rocks, pretty serene of sorts, then it sudddenly got hot and i could use ice through my hands, which was pretty cool, and thenat night the village was attacked, by small and medium dinasuars....andfire, village got burnt down but i escaped with a friend by using both falco and eagle (giant owl) and shot a fire ball to cut of my friends house from the dinos so i could save them when i get my friend to safety....hot guy was at the safety point, aparently picking some wild flowers so was away from the attack and safe (secretly hoped that the flowers were for me XDDD) and then we wonderedto seeif other villages were okay (my falco was already assisting my friends parents (he can carry two people XD), and then the elder of the village which never seemed to open his eyes popped out from the bushes and obviously he survived....and we managed to enter the other village, which had been attacked to and covered with fire, village people were around and i could hear them chatting saying something like should we tell them how we died?? .....they're dead? is my first thought.....then i wake up >.> LOL

okay and the dream before thatwas an interesting one......i need to think of it.....ermmmmm.....oh yeah im some kind of spy that wants revenge from being fired from the workplace were they are producing some kind of science thing (i obviously wasn't a very good spy) LOL and theres a party being held so before i go up stairs to the party i see in the mirror (horrible dress....and imreally skinny, ofcourse that part i liked :P) anyway i use magic to change the dress, into a black shiny leg slit skirt that really showed my breasts off pretty well XDDD and started to join the party....acting unsuspisciously i enter the party start eating some grapes......and the man im after passes by....and ive been drugged.....really not a very good spy...alll i kept thinking was, how the hell did he know i was going to eat the grapes?? LOL not really worried at the fact i was being taken to a small room and being locked up there >.>.....anyway while being locked up there and still drugged, the guy imafter was like KERI are you alright?? and acting kind and holding my hand, and i said why are you acting this way when you are the one who put me here, and he walked out saying i dont know, and i thought don't act that way or imight start liking you.......reallly.....not a very good spy.....anyway onto my escape, his partner, who was a pretty blonde, scientist, opened the door and shouted weve figured out the formula orsomething or another, and i grabbed her and used her as a hostage, pointing a gun to her head......which was actually my hand :S (for sure il never be a spy XDDD) anyway the blacksuited bodyguards came up and started shooting, so i protectedmy hostage (wrong way around right?) and i got shot in the leg......it really hurt for a dream!!!....and i told the lady to get out because he probably doesn't want her around anymore, code for either i was jealous or he was going to kill her, probably both >.> LOL and then the guy im after shows up and gets me a doctor and stays with me.....and i wake up.....wierd dream i know......

later my dream continues when i fall to sleep again, only im on the streets in hiding (obviously escaped) and then i find the guy (ireally don't know his name, i wish i did!!) or rather he finds me, pulls up in a car, tells me to get in and im like, should i? but then i realise hes being chased by some gangsta looking people shooting bullets (ididn't get shot for once) and then were in car, crash the car, get on a motor bike, crash the motor bike (there is a lot more action like flying bullets, shouting, car scenes, just wanted to shorten it :P) onfoot, running, enter a building and they are on their way, i realise i know a short cut to an underground hide out of mine,lead my guy down there with me, enter the hide out, my friends are there and they made a lil party for me, with cake and all and my guy tries to have some cake im like, who said you could have some cake?? anyway, somehow the gangsters findthe hide out, we run for it and over some fences, get caught and we give up and then i hear that apparently my guy has slept with the gangsters gal, imlike no he couldn't have, hes got me right (......aparently i like him now, and forget about spy and revenge >.>) and he was like i don't care your guy is dead now anyway im like noooo (come to defend him and all) i was like okay, how about i sleep with you, thats only fair right, and i think i don't care if its my first time, cause i get to protectmy guy....turn to my guy to say goodbye and see his beautiful blue eyes....and wake up.....LOL okay, wierd i know, i actually think that could have been a video for how not to be a spy XDDD LOL

XDKeriDX Feb 19, 2011 2:24 AM
How far into xxxHOLIC doi have to go before i have to start tsubasa chronicles to understand it?

XDKeriDX Feb 13, 2011 9:01 AM
really? i actually find it easier to type XDKeriDX than XxXKeriXxX lol
All Comments