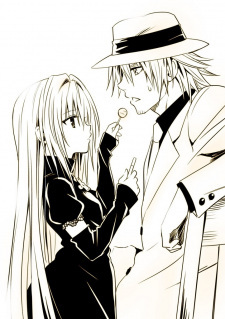 Stars-Soul Jul 2, 2021 4:32 AM
True, the novels really do bring into spotlight all of their personalities. Jin's writing is fantastic. I recently came across some people on twitter who were questioning his writing and I was like "did we read the same books?!"

Not only Kano, but I think all of them are such complex characters that if you stop to analyze them, you could write entire essays. But yes, Kano amazes me too, when I read his chapters I had to stop several times to catch my breath, especially at that part with his aunt. I'll have to reread everything since it's been a long time and I kind of forgot quite a few things, I'll do it now since I'm on my summer holiday.

I'm not very familiar with pokémon, so I thought this fanart was random, but wow, your explanation was great, I love these crossovers between franchises! I read in an interview that Jin was inspired by Doraemon, he said he wanted to write about a group of friends like in Doraemon (I'm not familiar with it either but I think it's cool) so I'm not sure if he was inspired by pokémon too, but who knows!

Ah, I'll send you a friend request on discord, my username is Soul™ # 9741. You can message me anytime, I have a lot of free time now.

Stars-Soul Jun 5, 2021 1:34 PM
I see. Well, if you ever want to pick it up again, I found someone on reddit who posted links to all the chapters. Here: https://www.reddit.com/r/kagepro/comments/fpv3nc/kagerou_daze_manga_a_masterpost_of_links/

Stars-Soul Jun 5, 2021 1:33 PM
Oh you didn't watch the anime? For some reason I thought you did lol sorry. But when you do, please watch it with an open mind, they cut a lot of scenes and it's pretty weird, but if you watch it to just have a good time, you'll surely enjoy it a lot more.

Ahh, in the future, I'd like to become a translator, so I probably won't write novels of my own, but who knows. Thank you! :)

I'm always happy to find people interested in this series, so no need to thank me. I just hope I didn't sound obsessed, it wasn't my intention, I just had a lot in my mind to say.

Stars-Soul Mar 1, 2021 3:44 AM
Oooh, I was very excited to read your message! Yes, Azami's story is simply astounding, from when she woke up in a cave surrounded by darkness to all her steps on her path to discover herself and the world. She's like a god or something.
If you have 10 minutes, watch this video: https://youtu.be/ka-mFJHlpAY it's fan-made but it's really beautiful, about the story of Azami and Tsukihiko.

Same! I'd have liked a more detailed story about Tsukihiko, he's such a mysterious character. And also very kind! I've been thinking about this and I'm convinced that he's one of the kindest characters I've seen since I discovered the anime world. Even now I'm amazed at how he could come in that forest every day for 3 years to build a house for someone he just met. Not to mention that that 'someone' wasn't even a human.

It's been a long time since I read the manga so I forgot some things, but I'll try to explain why Shintaro and Ayano don't recognize each other, without giving spoilers. So, you know, this story takes place on 15 August and only on 15 August. What I mean is that the world doesn't have a future after that. Because the world resets every time. Like it's said in the 'Kagerou Days' song, they relive the same summer for decades, but they don't remember it. Like in the song 'Lost Time Memory', there are 2 routes there, route XX (black jacket Shintaro) is a bad end because Shintaro kills Ene and then himself, then the world resets and we get the other route (red jacket Shintaro). That's exactly what happens in the manga too, Shintaro and Ayano don't know each other because they simply never met before. (and there's also another reason but maybe that's a spoiler so I'll avoid it--). I don't know if you reached those chapters, but there was a route where Takane and Haruka met in a hospital, unlike all the other routes where they meet as classmates.

Oh, and another thing that bothers me, about the fandom's views on the anime. I know it's not the best anime ever, but people don't take into consideration that it is not an adaptation of the manga. It is, again, another route. The last route, which has a happy ending. After all those hundreds of times of the world repeating, they finally managed to defeat Saeru and get a happy ending. (I kind of ranted here, but I had to let it out somewhere, sorry)

About Kano. I personally think he has the most hurtful background out of the mekatrio. Like I said, I don't remember how detailed his story is in the manga, but in the novels, damn, it hurt my heart. I know it's more work to read the novels, because there are a lot of words and few pictures, but I really encourage you to read them. I didn't like reading that much before, but these books completely changed my views on lecture. (the irony is that I'm a student in a literature college lol)

Ah, no, don't worry about the profile thing! Actually, I was really touched when I saw that you put my name there. I'm grateful! 😊

Stars-Soul Feb 5, 2021 1:31 AM
You know, I'm happy to see new fans like you, considering that the main series ended a long time ago. (there was supposed to be a sequel movie last year but it got postponed indefinitely) I mean, I know some people on twitter, but they're mostly active on 15 August or when there's an anniversary. For example this month, it is the 10th anniversary of the Project. I'm curious to hear your thoughts after you finish more content. But, of course, take your time.

Stars-Soul Feb 4, 2021 1:50 AM
Oh wow I'd never have guessed that you use google translator. But now that I think about it, your choice of words, word-order and sentence structure do give off some sort of a Romanic language vibe. Probably mine as well, since my native language is one similar to Spanish.

Yeah, the Kagerou Daze manga might not be very friendly for a first time reader. But it gets better. At some point it even gets frustrating. (for me at least). I personally prefer the novels, I even bought them physically. Someone said, and I agree with them, that: the music introduces you to the world of kagepro, the manga focuses on the story, the novels focus on the characters and the anime ties them all together.

Stars-Soul Feb 3, 2021 3:07 AM
It's the language too. I read somewhere that speaking different languages can influence the personality, more or less. Like, English is not my first language, so when I speak it I may sound more childish or something, probably because I don't know / use fancy words or sentence structures.
What do you mean by triviality?

Stars-Soul Feb 2, 2021 1:53 PM
Yeah, Ayano is such a complex character, she's really the definition of a "dream big sister". I don't know how big of a fan you are, but if you ever want to know more about them, they have many contents like 'Mekakushi Radio' or 'Mekakucity Talkers' (you have to search for translations on the fandom website or on tumblr, but they're so good I swear) Or if you wonder how Ayano and Shintaro met and became friends, they have a 'drama CD' that someone reuploaded on youtube.
Hiei from Yu Yu Hakusho, right? I watched a few episodes a long time ago so I don't remember much, but from what people say he's very similar to Killua from HxH (as well as the other three guys) so I can imagine that they're well written and the author cared about them and not just threw them there for the sake of the plot. You watched K-on too? That's the show that introduced me to the music genre anime, I'm happy to hear people talk good things about it. :)

Stars-Soul Feb 2, 2021 4:06 AM
Well... I'd have talked more about kagepro's plot but since you said you haven't finished the novels and manga, I don't want to accidentally spill some spoilers or something hehe... Hmm.. do you have any other favorite kagepro characters besides Ayano? Obviously, mine are these best boy and girl-- but this is such a series where you cannot dislike anyone, they're all special to me, both the main characters and the others. That's my main criteria in choosing my favorite anime series, a large number of relatable and lovable characters. Do you also have such things or you seek only pure enjoyment when watching an anime?
(and, if you don't mind me asking, are you older or younger than me? You don't have to answer if it's a private information! I'm almost 21)

Stars-Soul Feb 1, 2021 2:34 AM
Damn- seems like her tsundere-ness has spread onto me ha. What should we talk about next?

Stars-Soul Jan 31, 2021 1:03 PM
Yup, Fireworks in the Summer End is more or less similar to Summertime Record, where they look back at everything that happened to them and move on towards the future. You'll understand it better once you reach the end of the 8th novel, everything is really wonderful!

Oh so you want to match those pictures of Haruka and Takane as profile pictures? Then, since they're gifs, we should choose only one frame; what about the frame where they both smile? I think that's the best one. (I mean-- Haruka smiles the whole time, so I guess my question only applies to Takane-)
All Comments