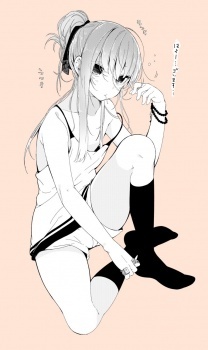 GonzoArmstrong Dec 8, 2015 3:35 PM
Yea it's been ages.
I've been busy with college and couldn't remember my account information for the life of me.
How have you been?

Enkii Jan 19, 2015 2:55 PM
yes XD But really~ Who else would have thought to label and diagnose so many different personality types? 8D

;o Gotcha~ gotcha~ Well I feel sorry for whomever you are taking with you mimi 8D

:D To hell with headaches indeed lmao XDD ;o Not really~ I'm usually pretty mellow in rl XD Once I get to know someone I can become energetic, but it's only in spurts :P

lmao XDDD It would backfire if you sat on me ;o I grew up with two sisters so tears, pouty faces, and tricks like that have NO EFFECT >:D
TRAINER MIMI USED SIT, BUT IT WAS INEFFECTIVE 8D

;o you're letting a cat you don't like win? WHAT'S WRONG WITH YOU >:D

Enkii Jan 18, 2015 3:11 PM
lmao XDD Leave it to the japanese to be able to name so many different personality traits XD

D8 Hey now, who said I was combusting with you D888 I dun wanna esplode ;o

What if they like you sitting on them and don't move? Then does your plan backfire? 8D
;o Asshole kitty~ I see i see~ So between you vs him, who's wining? ;D

;o Maybe someone that was dedicated to you that wanted to go with you? :D

B-but.. no hugs? D8 Who doesn't like hugs D88888 X3 ;o Really? You don't think you'd go crazy with a bunch of high energy clingy people being around you all the time? 8D

8D IN THE RED CORNER WE HAVE LADY MIMI!!!! AND IN THE BLUE CORNER WE HAVE KING WATAKANABUUBUUSHOOSHOO!! Both parties are fighting for the sanity of the kingdom, WHO WILL EMERGE VICTORIOUS?!?!!? 8D ;o You like tentacles or something?

You sit in people's laps and bug them to piss them off? ;D
Dawwww :'D See~ you like him after all and he likes you~~ He's just tsundere ;3

lmao XDDDD So you just want to EXPLODE like that? Go BOOM and be gone? X3 I suppose that's a fancy way of going, but what if you combust and take other people with you ;o?

kuudere and tsunshun eh? X3 That's an interesting mix mimi~ I can see the kuudere, but not so much of the tsunshun ;o Then again, tsunshun is more of a set of feelings than it is a display of emotions. 8'D And now I just wanna hug you~~~ lmao XD Can't believe you looked them up >:D I figured you would have already known what dere you were ^~^
A bunch of kuudere/tsunshun in one room? No way 8D You seem like the type that would get along well with high energy people that are very outgoing X3

:O The Kingdom of Tentacles raised these princes to be ruthless, bloodthirsty serial rapist men in order to enslave all the women in the kingdom ;o Now Lady Mimi, on her quest to stop the evil King Watakanabuubuushooshoo will embark on a journey to overthrow the tyrannical ruler and to stop the rapist princes 8D

lmao XDDD It's cute until any time you sit down she's in your lap. It's like, YOU REALLY DONT HAVE ANYTHING BETTER TO DO!?! When I come home from work she runs to me like some kid XD it's cute and funny~ Your cats don't like you? D'8 Maybe they're kuudere too~ ;3
Awwww~~ Mimi's one-sided love with yoda-bear~ YOU MUST SHOWER HIM WITH LOVE!!! ^~^

;D mkay~ Now I'm determined to get a reaction out of the tsundere ;3

Really? Suffocating seems like one of the worst possible ways to go, IMO ;o lmao XD force yourself for the sake of humanity~ You're such a martyr aren't you ;P ;o And what drama was this? WHO STOLE MY IDEA?!?!? D8

;o You said humans suck but that you wouldn't be able to relate if they weren't human ;o What kind of race do you think you'd fit best with; tsunderes, kuuderes, and whatever othere dere's there are all in one place? 8D

Yush, ;o the probing. No thanks Alien-san >:D

;o lmao XDDD Dead Mr. Rapist Prince >:D And then as the story goes along you find out he has a brother that's also a serial prince rapist and he wants revenge :O!!!

She keeps laying on my lap and meows pathetically until I pet her X3 but it's hard to type and pet the kitty at the same time ;o
Do you? X3 I think those names are funny~ especially yoda-bear XDDDD "Time to feed yoda-bear it is~"

I never said it would be reborn, just that it ended ;o So even if you did manage to wake up, you'd suffocate in the vacuum of outer space 8D ;o So you'd like to rebuild the world, but what if you didn't like any of the few guys that where left to procreate with ;o? Evil beings~ yes, that would be fun until you got captured and probed ;o And what if they could now live much longer than you? You'd age and die while they would live much longer lives~ you'd leave all of these new found friends behind D8

Really? ;o Then again Mr. Prince could be some sort of serial rapist that seeks out sleeping beauties ;oooo

Yes, I have this cat that is driving me up the wall right now ;o She's black and white and while I SHOULD have called her Oreo or Penguin, he name is Kiki instead 8D From Kiki's delivery service ;o You know, the cat in that movie is all black and a boy, so that wouldn't work, SO IT'S KIKI INSTEAD 8D Do you have a pet?

But what if he was hawt ;o Would that change your perception? ;D

Bunch O girls in war ;o ...... right.... thats an interesting premise X3 Sounds familiar to another anime for some reason, just can't put my finger on it ;o

;o a gap in your memory. So, how did you wake up from this year long slumber? :D
Why not ;o Sleeping beauty gets to sleep all day, doesn't have to go to work/school, and gets woken up from a kiss by some princy guy :D HOW COULD YOU NOT LIKE THAT?!?! XDD

;o So I dont know anything about the "legendary kantai collection" but if you have cosplay then it must be interesting XD

:O Your signature emote? But I've seen other people use it too ~ ;) *pats head* I bet sleeping that long wouldn't be X3 Shall I call you sleeping beauty from now on? >:D

lmao XD I watched the first eps of Absolute Duo and Shinmai Maou No, but I've read the manga for both so there aren't really any surprises when I watch them X3

Will you be watching the kantai collection anime then~? ^~^ *steals*

Someone got me started on Onigiri and then I couldn't let it go ;o Thats what I usually dont play games because I find it so hard to walk away from them :D

Any anime this next season that looks interesting to you?

Meh~ I'm not really sure what normal is X3 I tend to change hobbies or activities all the time, otherwise i'll get bored ;o I was addicted to an MMO for the last two week, but I was FINALLY able to pull myself away ;o Addiction is a dangerous thing~