In this episode of Aoharu X Kikanjuu, Hotaru is given a test to get her gun. Hotaru's inexperience is showing though and it's a problem for the team. 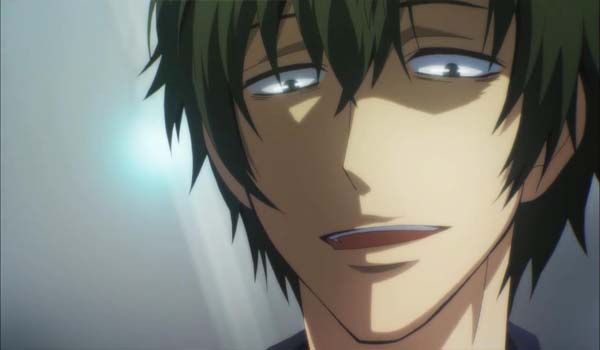 In the previous episode, Hotaru is going to do a test run for her gun. Toru is also pinned on the store counter by Midori after he tried to punch the guy. This episode continues this confrontation. It's revealed that Midori is part of the reason why Masamune's team only has two members. He seems to have done something to the third member. It's only hinted for now but Toru's aggression draws from that reason. Midori also taunts Toru when they didn't join last year's Top Gun Combat tournament since they only have two members. Three members are required to play in the tournament but Toru assures that they have a new member already. Midori taunts him some more by saying that straightforward and honest people shouldn't play survival games. This seems to be directed at their past member and Hotaru as well. Midori caught on that she might be their new member. The store manager (his name is not given) also thinks she is not cut out for the game. 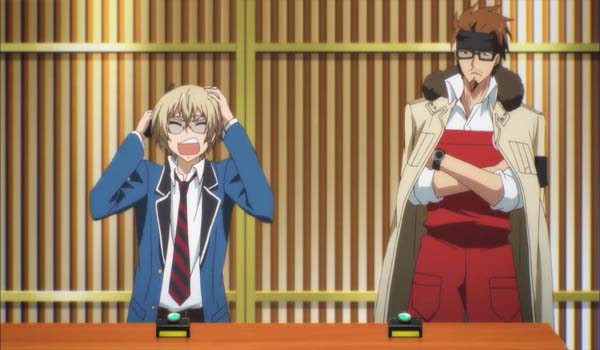 In her test run, she can't aim well with a handgun. This is enough to convince the store owner to not let her have her preferred gun. Hotaru insists on a different test though. The store manager entertains her request. He opens the curtains and reveals a stage where they will play in. Hotaru must hit the manager with her gun in under five minutes. If she wins, she keeps the gun but if she loses then she gets nothing. Hotaru agreed but only if the manager has a weapon as well. Her sense of justice tells her she can't shoot someone unarmed. The manager doesn't plan on using one but he agreed to keep a handgun with him. 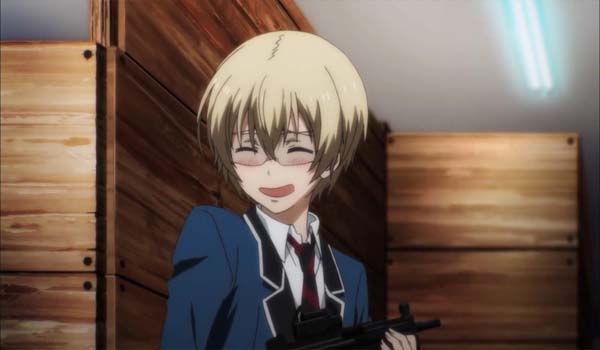 The chase is on. Hotaru is extremely excited when she realizes she is playing survival game again. After a long break from the game, the smile on her face is just adorable to watch. This doesn't impress the manager though. It's as if she isn't playing seriously and he might win if she doesn't play seriously. The manager suddenly got a chill down his spine though. It's bloodlust. It's an aura of a person seeking to kill and he couldn't believe it's coming from Hotaru. Her adorable smile fades as a different kind of smile comes from her face. It's seems to be the face of someone enjoying the hunt. The manager has a hard time dodging her. With her heightened instincts and fast reflexes, the manager can only do so much. Time is almost up though. The manager realizes Hotaru is done when he sense her on the other side of the wall. There is no way she can reach him with the time ticking down. He is shocked when Hotaru's excitement made her leap the wall. The manager had a flashback of a war he was once in and immediately shoot the gun away from Hotaru's hand. Her face made a lasting impression on the manger despite being defeated. Hotaru accepts her loss with a smile but she was rewarded the gun despite this. She is elated now that she has the perfect gun by her side. 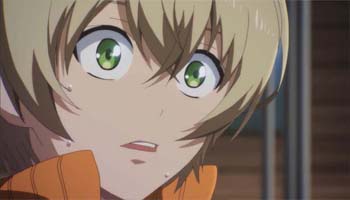 The following morning, Hotaru joins a survival game. It's red team versus yellow team and she can't wait to show the unsuspecting people her powered up form. Minutes entering the game though, she was hit. The next scene is a bewildered Hotaru in the safety tent alone. Seeing her there, two players immediately talks about how she is an amateur that is only filling space so Masamune's team can join the TGC tournament. Hearing "amateur" is like daggers piercing Hotaru and she decides to do her best in the next round. She was hit mere minutes again though. It happens in the next round as well and the one after that. Before the next game can begin, Masamune and Toru pull her to the side. 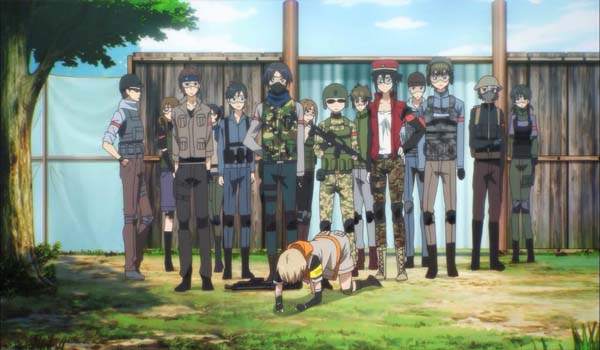 They tell her to not act on her own. Survival game is a team sports and she shouldn't rely on her base skills to win. Masamune instructs her to follow his lead since she is an amateur. Again, her eyes tell how much she hates the word. Hearing it from Masamune made her lose cool. She starts yelling at Masamune telling him he only want to act like a dictator in the game. She reasons that she can still win without playing in a team. Her teammates are speechless and Masamune has a sudden flashback involving Midori. He is no longer amused. Since Hotaru insists on playing by herself, he drags him to the other team and asks them to let her on their team. They agreed but Hotaru is devastated. The episode ends with Hotaru thinking she is banished from Masamune's team.

Hotaru playing the game again is pretty incredible. Her smile is amazing and the show is now finally making sense. The idea of a girl having intense killer aura like her when playing is certainly an interesting thing. The enemies might underestimate her like the store manager until they realized she hunts more than playing a simple game. 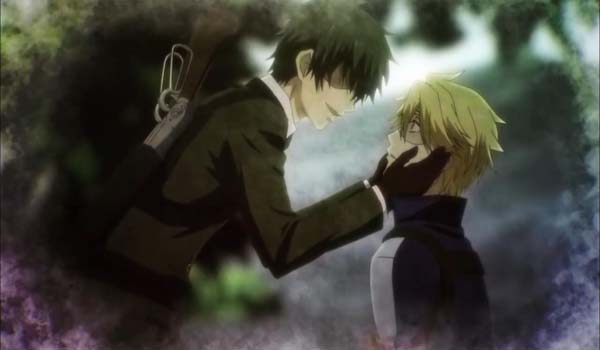 Midori is being setup as the main antagonist of the anime. It seems the TGC is the big plot point of this anime and the incident regarding the past tournament might reveal what unspeakable thing he did to gain such hatred from Toru and Masamune. The flashback of him with Masamune in his hands looks interesting. It'll be interesting to see how he plays survival games. 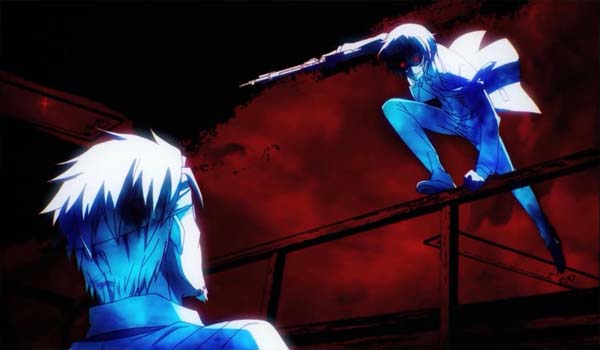 The game between Hotaru and the store manager is intense. The match is well paced and Hotaru is featured in a wonderful way. The scenes of her showing her bloodlust are amazing to watch. When she climbed the wall to catch the manager, her face looks so intense that it's actually captivating. It's a shame the following scenes brought it down by claiming she is an amateur and she lacks experience. Once she gets good though, one can only imagine how far she'll go. It looks like the anime is going full speed with the sports element. With the romance dead, I think going the sports route is smart. The BL fan service can be used as lighthearted fare to balance out the seriousness of the games. The survival matches looks intense with mind games component to it. It's smart to not let it overpower the show by showcasing flashes of the handsome faces of the characters. 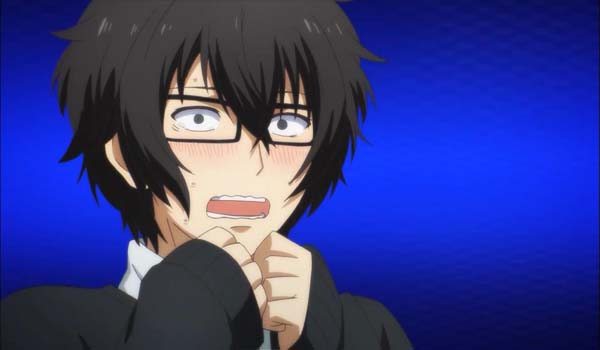 Hotaru will unleash her bloodlust at Masamune now that she's on the opposite team. She'll lose though but she'll be good enough in time for the TGC.

If the TGC starts at episode five, Midori might grace us with his combat skills.