Fights in Naruto are not just about brute strength: they require thinking ahead, predicting the opponent's actions. Here we examine an early battle in Naruto to see what it takes to be a great fighter.

"One shallow breath. One tiny movement of the eye is enough to bring on instant death." - Sasuke Uchiha 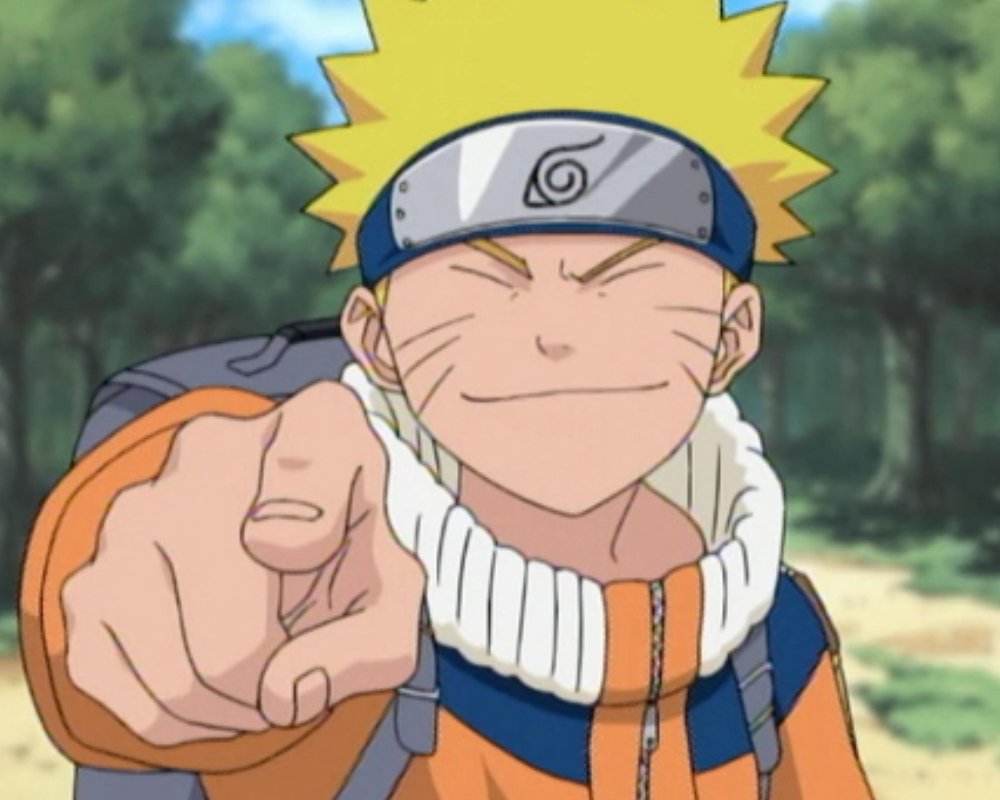 Naruto Uzumaki is a optimistic young goofball with big dreams for the future. He slacks off at school, plays pranks no one really appreciates and constantly disrespects his elders. His delinquent nature isn't entirely his fault, though. Around the time he was born, a powerful demon known as the nine-tailed fox attacked how home, the village hidden in the leaves. The Hokage, leader of the village, gave his life to protect the world. They chose one boy and sealed the spirit of the fox within him. Unfortunately, Naruto won the lottery for that position. As anyone who's ever had a babysitting job knows, little collections of pure unrestrained evil can be pretty hard to control.

Needless to say, Naruto has had a pretty hard life. People tend to ignore him, others fear him. A lot of his classmates even hate him. At the beginning of the series, he's on the fast track to failure. It wasn't until he discovered his own potential that he was able to finally take the first step to success. That step would lead him to become one of the first trainees in the history of the Leaf Village to be trained by the famous ninja Hatake Kakashi.

The Most Important Battle 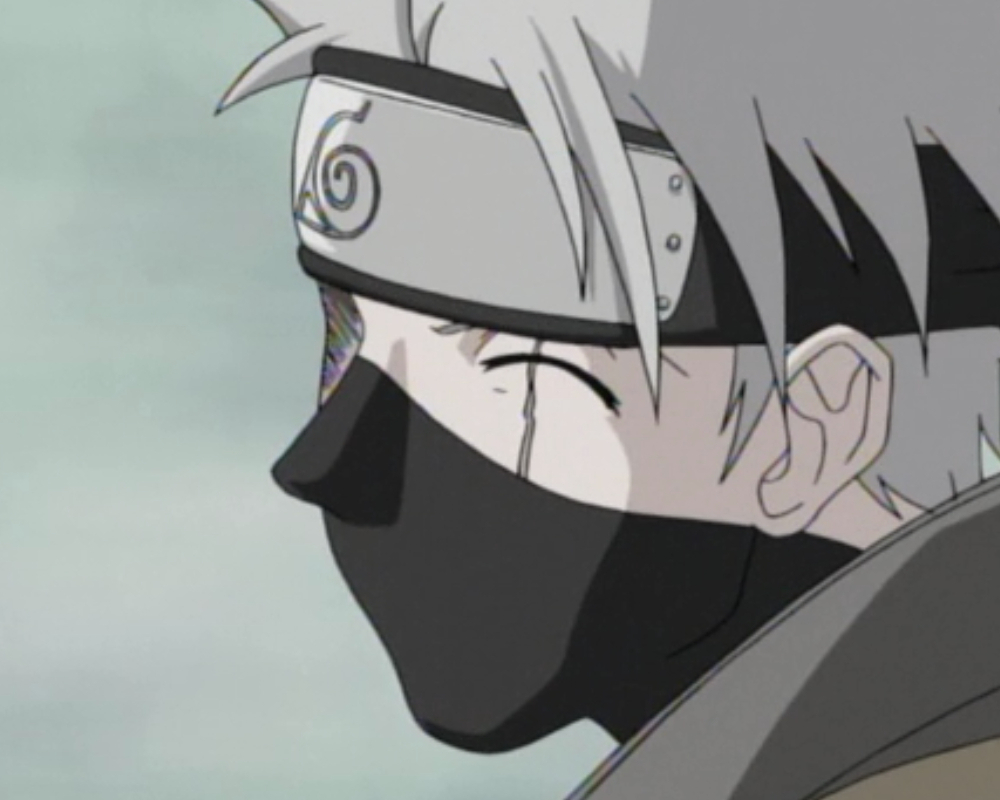 The battles in Naruto are some of the most tension heavy fights out there. It's not just because of their flashy moves or the mystical ninja powers they use on a regular basis. While most series showcasing a lot of fighting lean more toward who's the strongest, battles in Naruto have a unique distinction of being about who's smartest. It's always a chess match. If someone can piece together a clever strategy, they have a decent chance at winning. This message is made clear in the first real life-or-death battle Naruto gets dropped into: team seven versus Zabuza Momochi. To some, the fight against Zabuza Momochi may not be the best battle of the Naruto series, but it might be the most important.

Due to a set of circumstances beyond their control, Nauto's fledgling team of ninja are set against one of the most powerful assassins in the world. Zabuza Momochi on the same level as Kakashi, which means in most circumstance, Naurto's squad wouldn't stand a chance. So Kakashi steps up to fight Zabuza on his own. 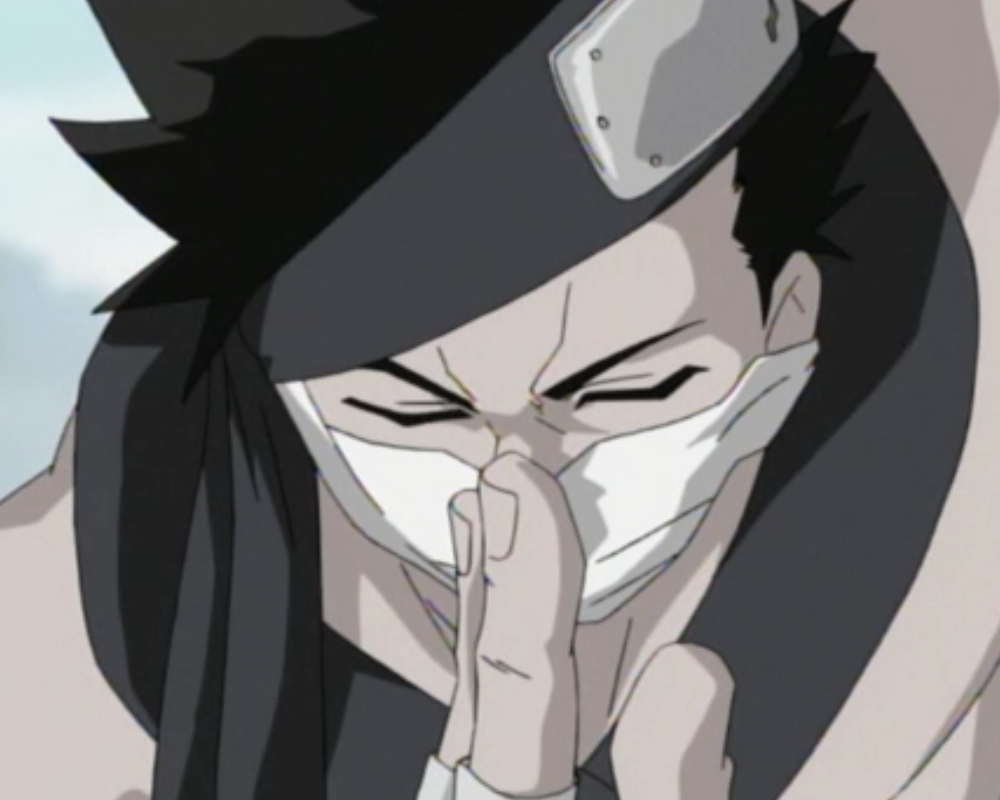 The Kakashi versus Zabuza is one of the most important battles in the series because it's the first time the audience is introduced to what real ninja battles are like in the world of Naruto. A deadly game of chess where one wrong move could mean death. In fact, there's an example of this even before Zabuza makes an appearance. While Naruto and his squad are escorting their charge through the forest, Kakashi notices a small puddle in the middle of the road. A pair of ninja rise out of the puddle and fire a pair of deadly chains that wrap around Kakashi and rip him to pieces. At least, it looked that way at first. 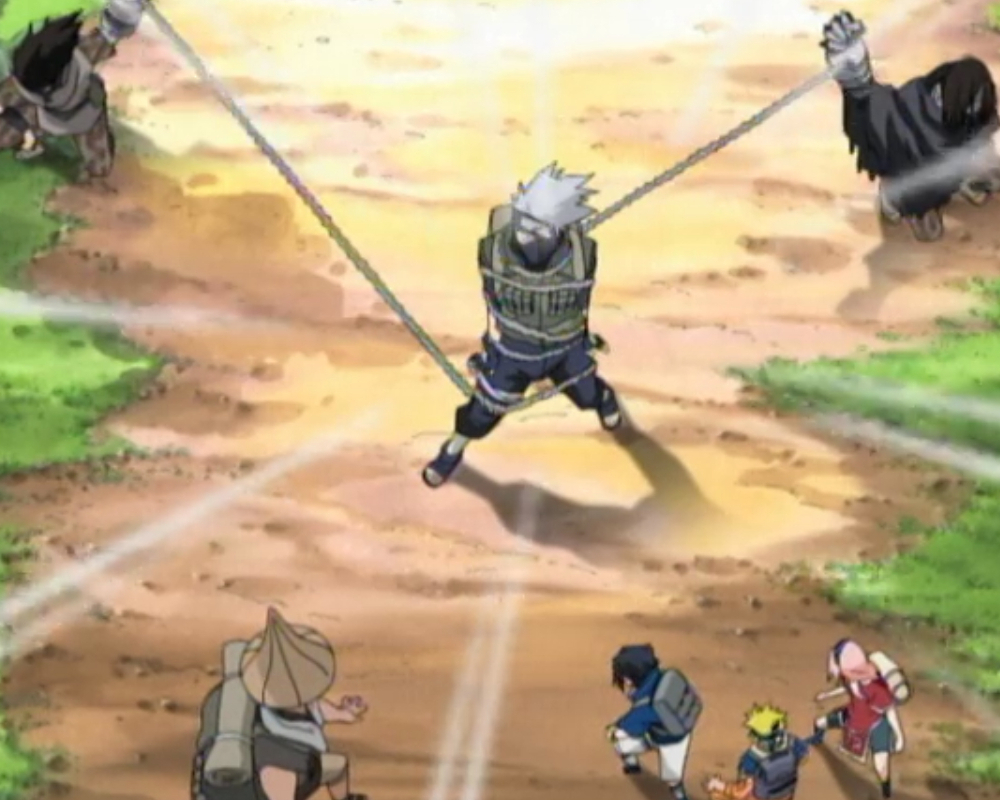 Thanks to the fresh puddle of water on a bright sunny day, Kakashi made a quick Sherlock Holmes style conclusion that a puddle in the forest meant highly skilled mist ninja are hiding somewhere. 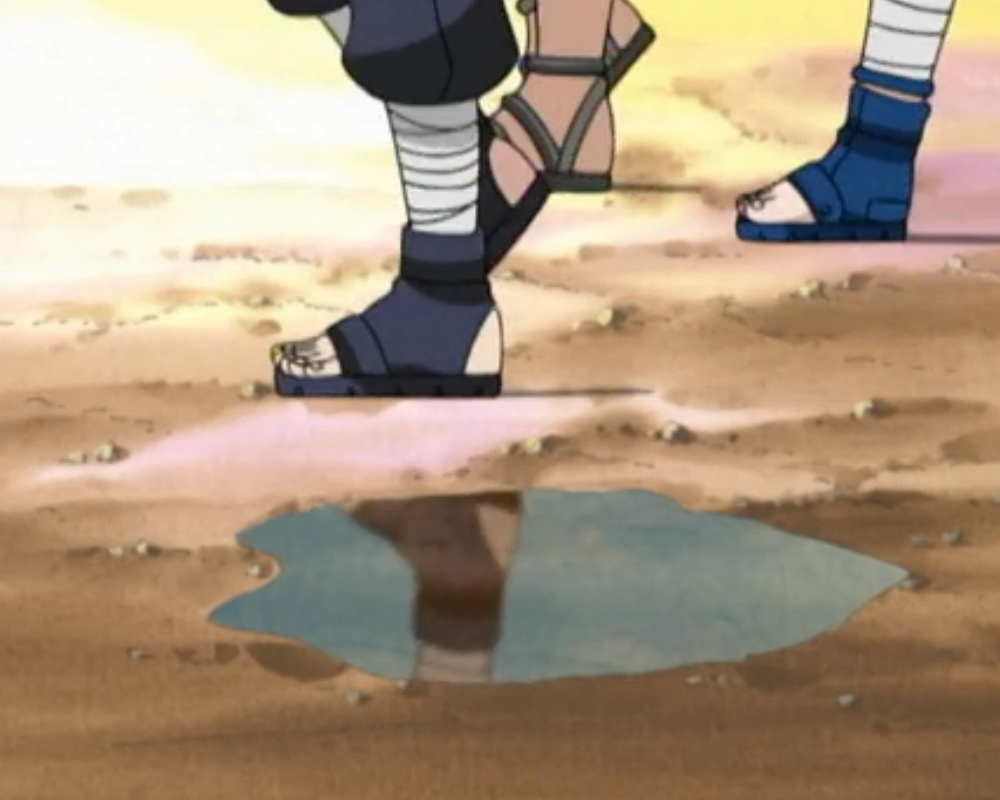 Thanks to a little substitution jutsu, Kakashi was able to trick the assassins into missing their chance. Turns out that Kakashi had switched himself with a series of branches which had been disguised as him in order to make everyone think he'd been shredded to pieces. In reality, Kakashi had been hiding the entire time, waiting for his chance to strike. The Demon Brothers are defeated soon after that. Having learned of the Demon Brother's failure, Zabuza decided to take the stage and that's when the real fight begins.

Zabuza's first move is to create a thick fog that makes it almost impossible to see: a dangerous thing when facing an assassin whose specialty is instant silent kills. The first actual exchange of blows is a real game of "he knows that I know." Zabuza's target is the bridge builder who ordered the mission in the first place. At the moment, Naruto and his squad are protecting him so, it comes as a real shock to see him appear right in the middle of the group. 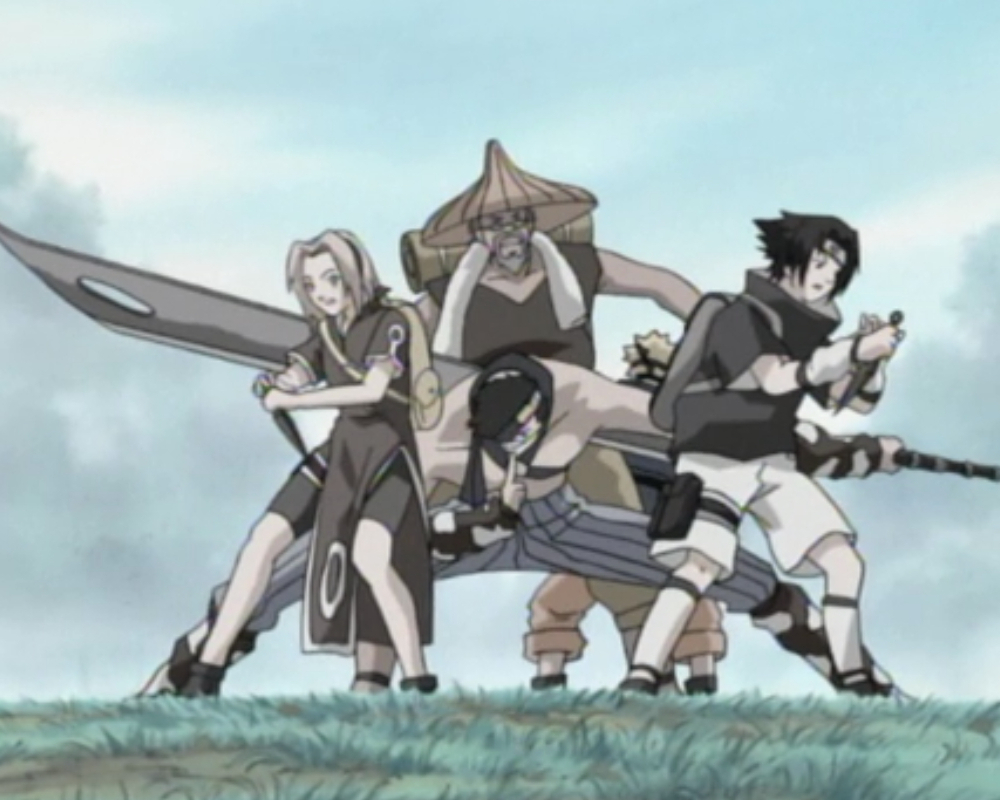 Kakashi immediately runs in to attack. Unfortunately, it was another trap. The Zabuza Kakashi attacked wasn't Zabuza at all, but a water clone. It was a plan set up by Zabuza to lure Kakashi into a vulnerable position, but the tables are soon turned when it's revealed Kakashi had already outmaneuvered him. Kakashi had already cloned himself well before Zabuza made his move. 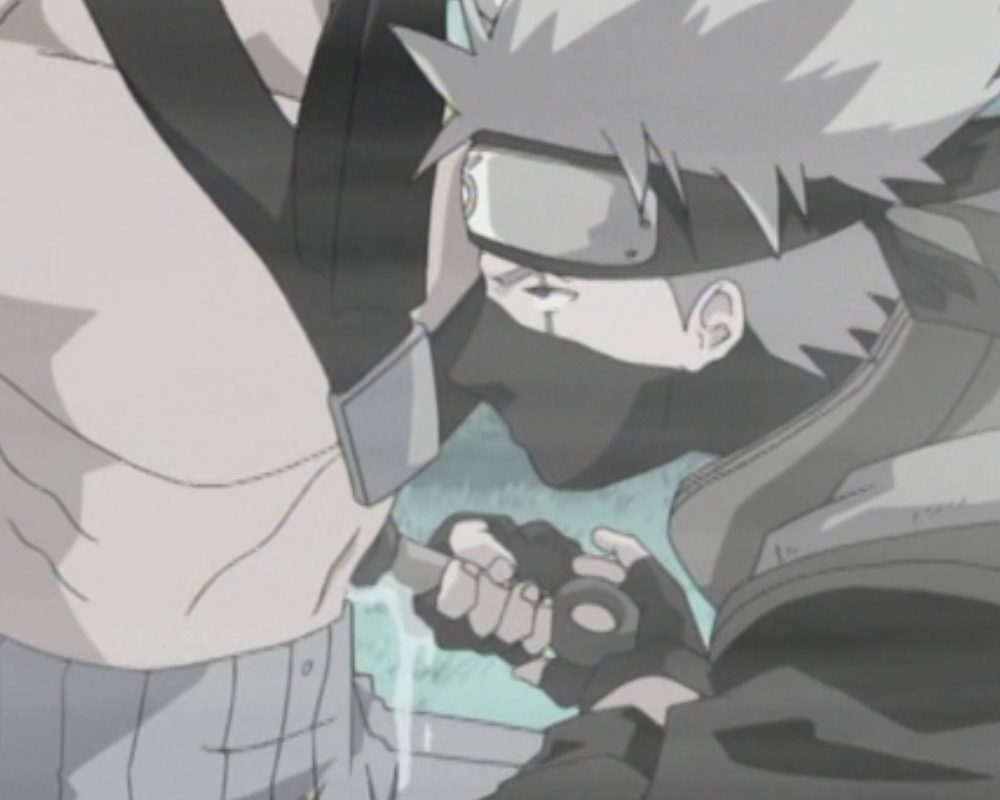 So the Kakashi that attacked the clone of Zabuza was actually a clone all along. It's that moment the series shows that battles concerning highly skilled ninja, it's not enough to think one move ahead. In the harsh world of the ninja, there's no room for romantic ideals. Ninja who survive are the ones who can predict their enemy's moves and pull off moves with the masterful skill of a chess master. 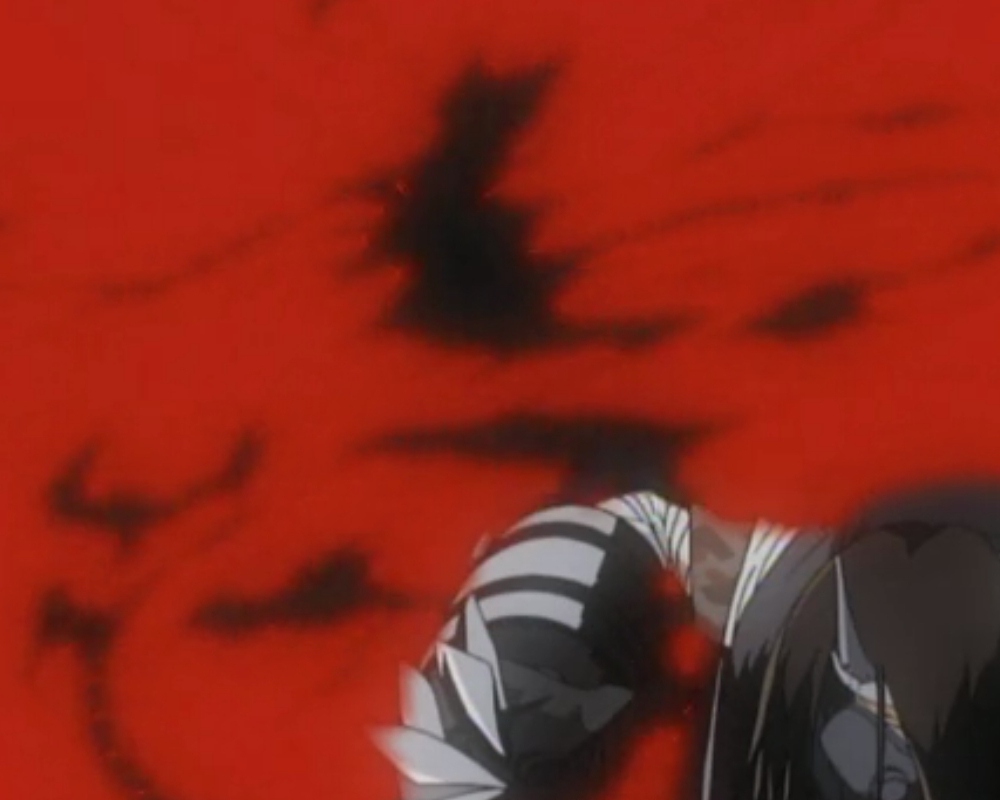 The terrifying thing is that if Kakashi had missed the puddle or had just shrugged it off, he would've died. No matter how skilled or powerful he was, the trap set by the mist ninja would've taken him down. That's the first taste you get. The first insight into how dangerous these fights can be. Ninja always have to be thinking. They always have to be alert, even on the simplest of jobs, because even the briefest lapse in their concentration can mean dead in the blink of an eye.