The most exciting feature of action anime is, of course, the action, and Soul Eater is no exception. When you throw in special abilities and transforming weapons, each fight gets that much more exhilarating. Here are 10 hot battles from Soul Eater that are sure to get your heart pounding!

Maka vs. Jack the Ripper 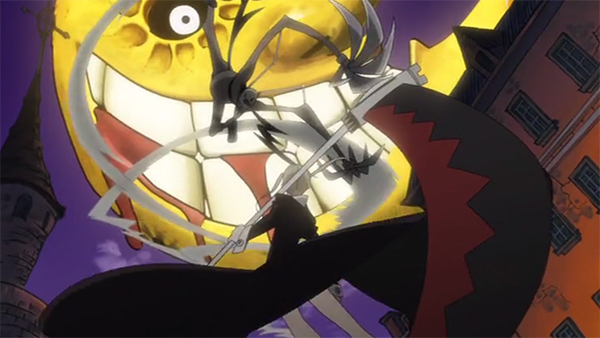 Maka fights against the mass murderer Jack the Ripper, and as the very first scene of Soul Eater, this fight gets the viewer's blood pumping right from the start. More importantly, it sets up the context for the rest of the anime. We learn that Soul is able to transform from a human to a weapon and that Maka is a weapon meister who wields Soul. The two of them are fighting Jack to collect his tainted soul, which is on its way to becoming a Kishin egg. 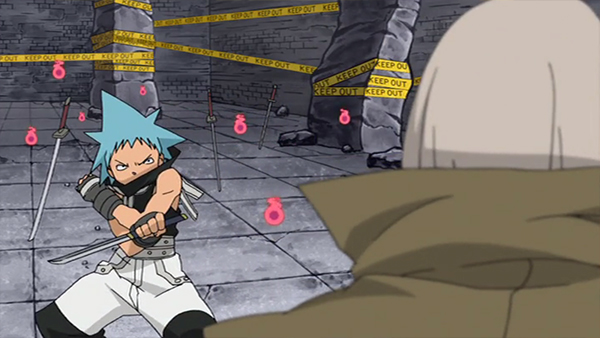 The fighting style of the loud-mouthed, ego-driven Black Star and his accommodating, mild-mannered weapon Tsubaki is introduced in this fight against the bodyguard Mifune, who is guarding the witch Angela. Although Black Star generally acts like a bit of a hot-headed goofball, after getting knocked around by Mifune, he proves that he can get serious when he needs to. Switching between Tsubaki's several different weapon modes, Black Star shows off all the cool moves that he has in his arsenal. This fight is the precursor to two more matches between Black Star and Mifune.

Death the Kid vs. Pharaoh 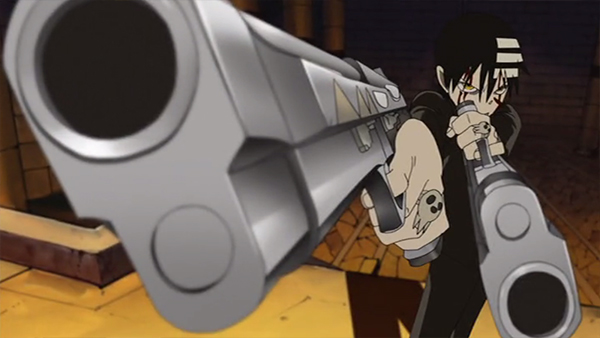 This battle is Death the Kid's debut in Soul Eater. After many misadventures involving his hatred of all things asymmetrical, he battles a resurrected pharaoh with his twin pistols, Liz and Patty. At first viewers may not take him seriously because of his debilitating obsession, but once the fight really starts Death shows his true colors. 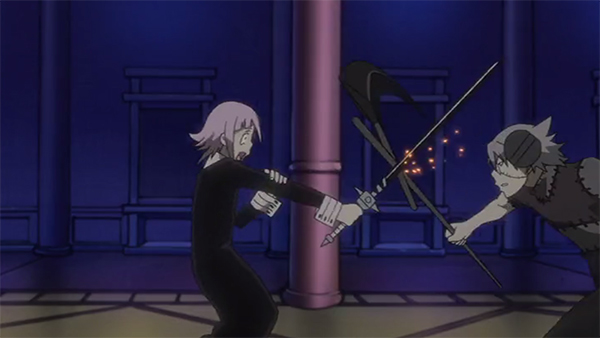 Stein busts in to save Maka from certain death at the hands of Crona and the demon sword Ragnarok. Though Stein has been shown fighting before, this is the first time that he is shown using a weapon—Maka's father, Spirit, no less. Stein displays his superior skills by negating several of Crona's moves that had previously given Maka a difficult time. It's also exciting to see more intense attacks from Crona and Ragnarok. 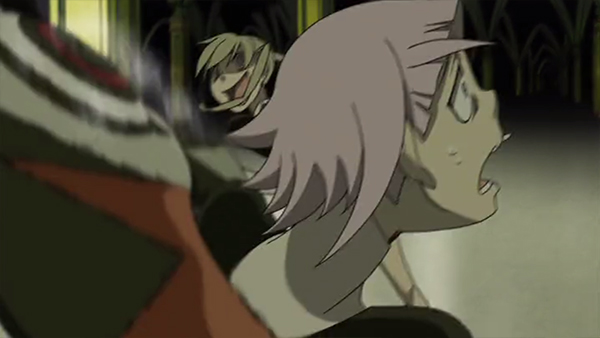 Even though Maka lost horribly to Crona before, she insists on fighting Crona again in place of Black Star. Refusing to lose again, she persuades Soul to borrow the power of the Little Demon to plunge her into madness. Enveloped in insanity, Maka becomes much stronger and fights in a similarly crazed way as Crona. This battle shows the strength of Maka and Soul's trust in each other, and watching Maka walk the wild side is a rare treat. 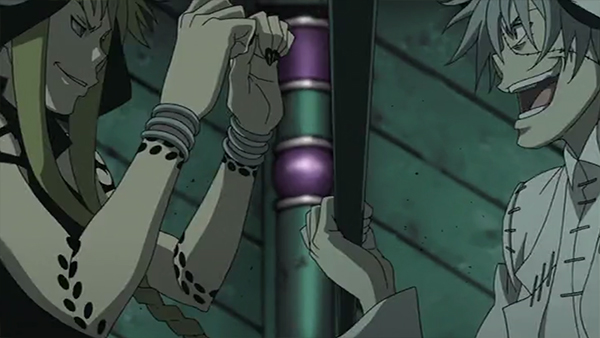 Mad scientist and witch researcher duke it out in this battle of adults. Since Stein and Medusa are both powerful fighters whose similarities are often highlighted throughout the series, the tension is high when they finally clash. Both of them have several tricks up their sleeves, and they are quite evenly matched. Their battle has us itching to see who ends up on top.

Maka, Black Star, and Death the Kid vs. Mosquito 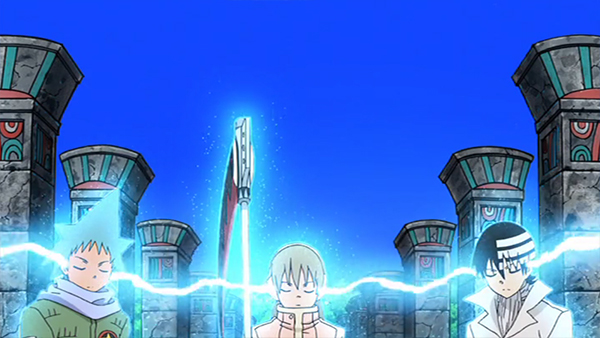 Maka, Black Star, and Death the Kid are on the brink of defeat, but thanks to Soul's piano playing, they manage to Soul Resonate as a team, boosting everyone's ability to the next level. We've seen them resonate during group practice, but this is the first time they're applying this technique in combat. The suspense is high as they all tap into their increased potential.

Maka and Stein vs. Medusa 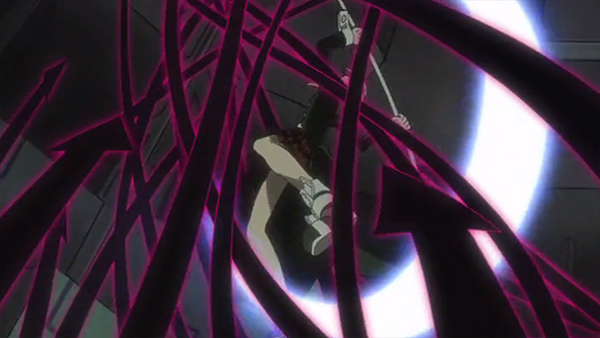 Stein and Maka team up against Medusa in this epic battle. Medusa evades Stein's attacks, claiming that he can't do anything to her if he can't hit her, but Stein points out that Maka has a special ability as well. Throughout the series, Maka's skills have gradually improved, and this battle is a chance to see how far they've come. Since Medusa is one of the main villains, this fight is definitely a worthwhile watch. 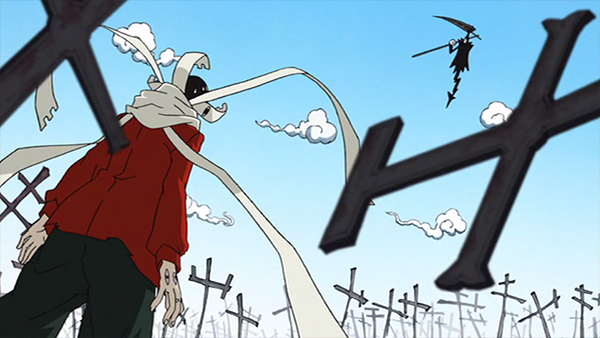 Asura and Lord Death engage in a large-scale battle of giants. Lord Death is always portrayed as a silly, light-hearted character, so it's a big change to see him sober up. Though they fought just a while before, neither of them was at full potential. In this rematch between two of Soul Eater's oldest characters, we finally see Lord Death in battle mode, equipped with his Death Scythe (Spirit).

Maka, Black Star, and Death the Kid vs. Asura 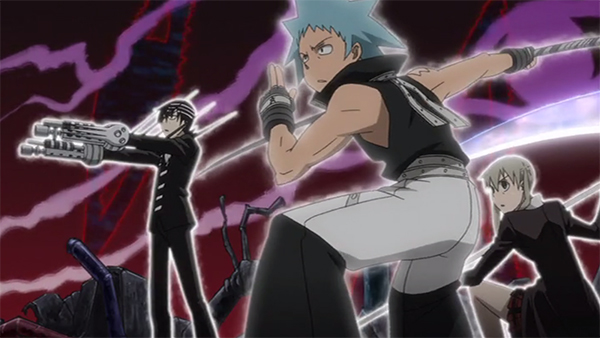 Maka, Black Star, and Death the Kid fight as a team against the Kishin Asura. The whole series has been pointing to this battle, and the tension is maximum. Compared to the beginning of the series, all of the characters have advanced significantly, and we get to watch them pull out all the stops. The final showdown is burning hot!

The creative fighting techniques and weapon mechanics of Soul Eater's characters make all the fights especially thrilling. Because all of the characters' fighting styles are so different, each battle scene is a chance to see what kind of abilities will be introduced and how attacks will be executed. In addition, since Soul Eater puts a strong emphasis on character growth, it's also rewarding to see how each character's existing move set has developed.