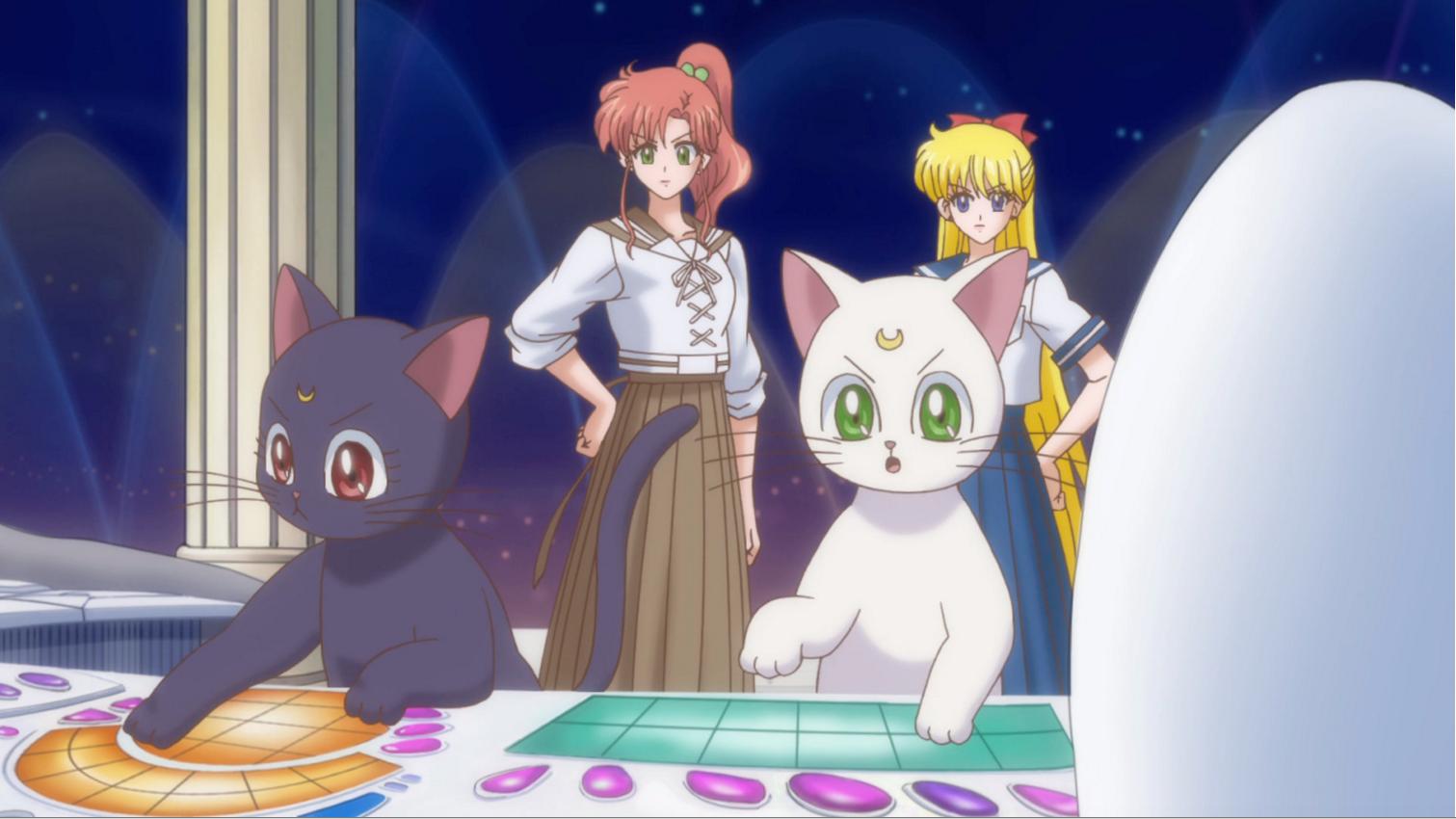 When thinking of Sailor Moon we often tend to forget the small, adorable, felines who helped guide the girls along their journey as Sailor Scouts. In the series, three intelligent felines appear and are known as Luna, Artemis and Diana. In the past, Luna and Artemis were advisors to Queen Serenity, but after the fall of the moon kingdom they were sent on a mission to protect and guide the future Sailor Senshi on Earth. It should be noted that they were not just merely catalysts for a lot of events that would occur within the series, but were also mainly responsible for assisting the girls in their own personal transitions and journeys into their new roles as Sailor Senshi. As before their encounter, the girls were all able to experience a new life on Earth in the present without any prior recollection of their previous life. In the present, Luna and Artemis participate in missions usually from a distance, providing the girls with advice and always reminding them to watch their back in battle. But even though they are small and not as strong as the girls, they would gladly throw themselves into battle to help them if the situation requires it. 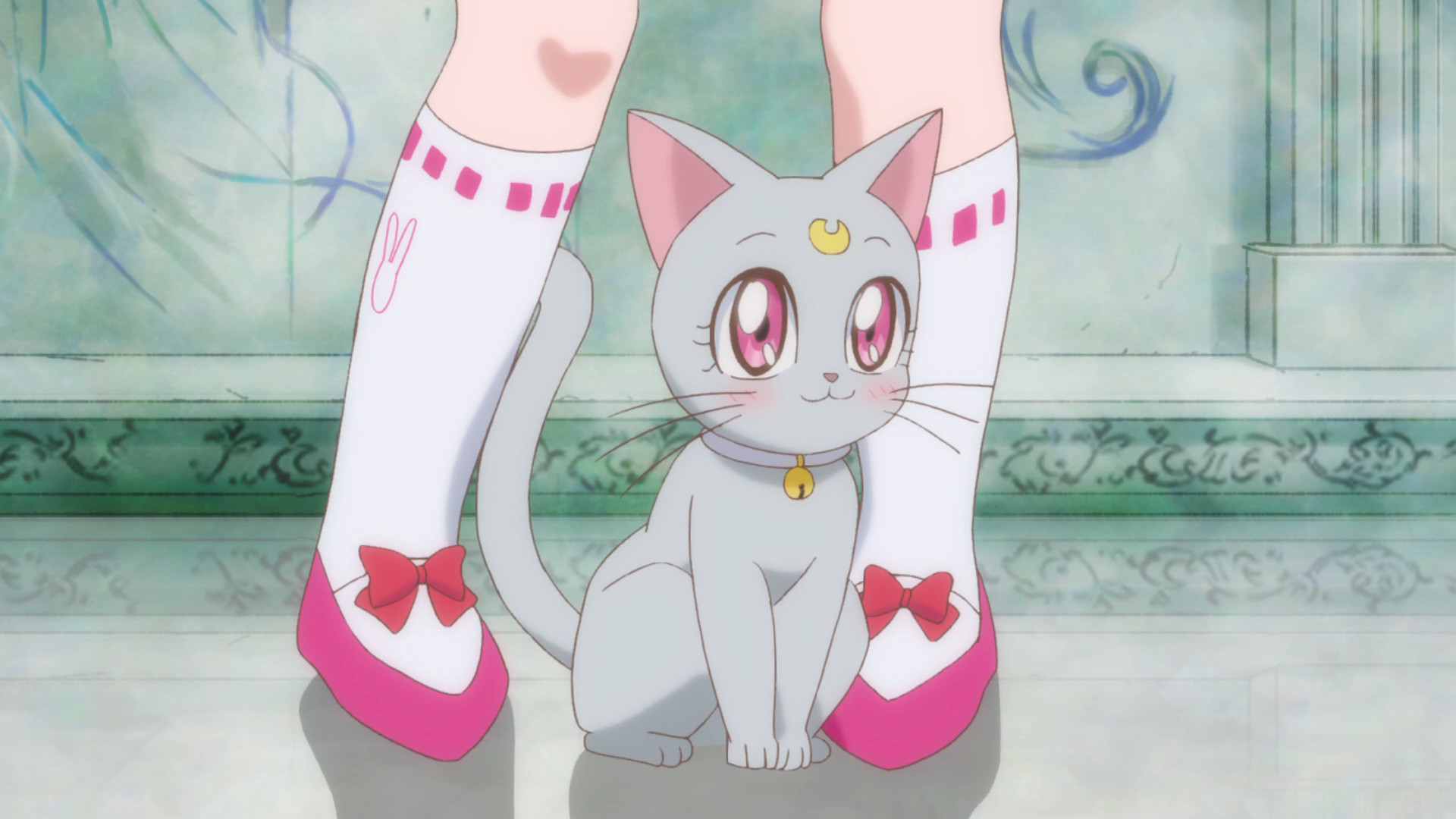 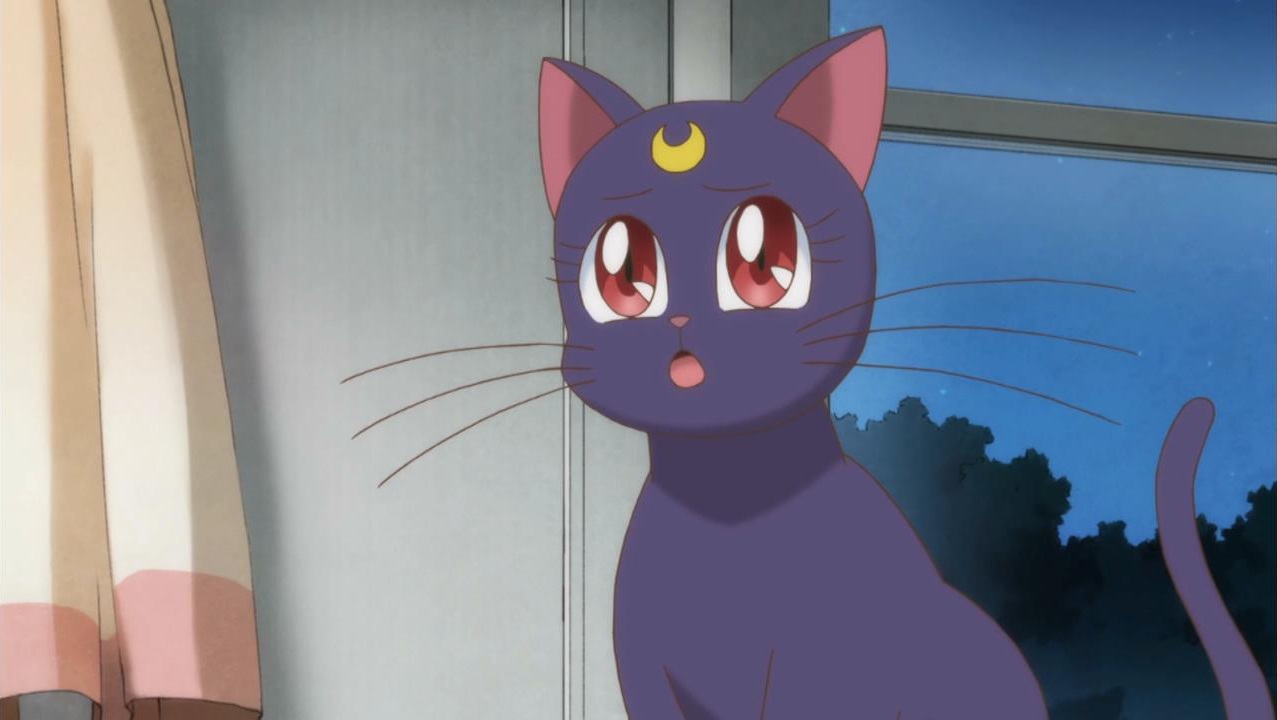 Luna is a black talking cat with a crescent moon in the middle of her forehead. She serves as the voice of reason and logic that Usagi needs to make sense of the dire and tough situations that she faces as Sailor Moon, essentially acting as both her guardian and mentor throughout the series. But before this, Luna served as the advisor to Queen Serenity with Artemis in the Silver Milennium. However, after the moon kingdom was destroyed by Queen Beryl's invasion, she and Artemis were sent away in hibernation to find the sailor scouts and the Princess in the future on Earth. Luna first encounters Usagi, and later gives her a magical brooch that would awaken her as Sailor Moon. But as this was the first time she had transformed into Sailor Moon, Usagi was forced into battle without any prior training. Usagi quickly put her sole trust and faith in Luna, as she used her expertise and knowledge of the Moon Kingdom to help her battle. Luna then guides her on how to control her powers and helps her learn the attack "Moon Tiara Boomerang" so she could face the youma, Morga.

When Luna wasn't with Sailor Moon, she was usually at the secret command centre doing her own individual research and surveillance. Luna was also responsible for giving Rei and Makoto their transformation pens so they could respectively transform into Sailor Mars and Sailor Jupiter. She also gave Usagi a disguise pen that would allow her to change her appearance to what she wanted to be on missions. Luna usually shows a more serious side to her personality due to her deep concern for the completion of their missions. Despite this, she still maintains her loyal and loving affinity for Sailor Moon as she shows through their ongoing friendship. Notably, after finding out that Usagi is the Princess, she feels guilty for not being able to put her trust in her and for the hardships Usagi had to face. Unlike their previous lives together, Luna and Usagi had the opportunity to restart their relationship within a less formal environment. Luna here sympathises with her not just as the Princess, but as the same young innocent girl who was swept up into being the leader of a group of interplanetary guardians overnight. Luna also provides somewhat of a motherly role towards Usagi's development as Sailor Moon. This is attributed to her strong bond with Queen Serenity, that serves as the impetus for her feelings of affection towards Usagi. 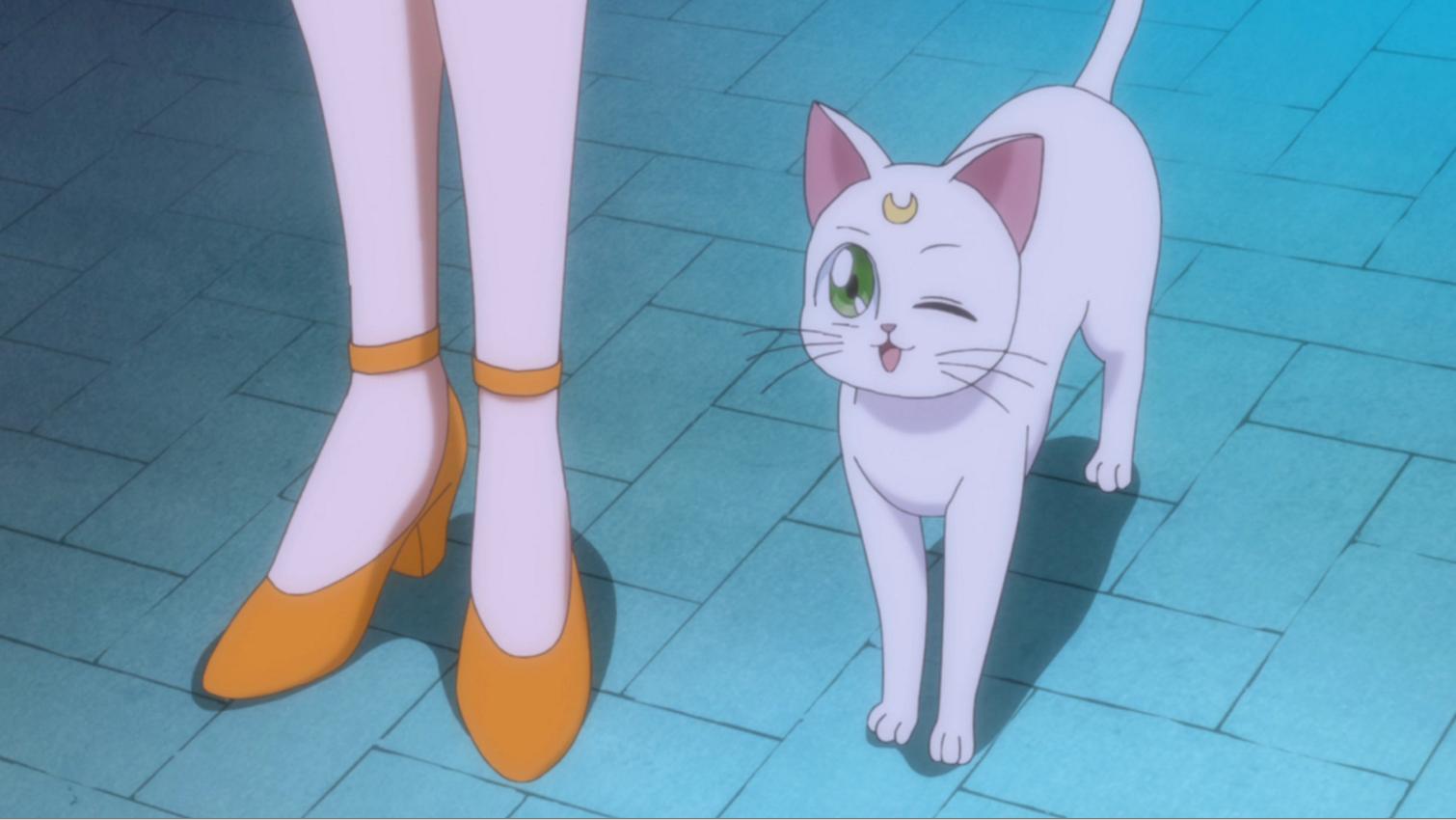 Artemis is a white talking cat with large green eyes who notably, is the only male character within the series to bear the crescent moon symbol on his forehead as well. When Artemis had awoke on Earth, the first Sailor Senshi that he had met was Minako. With Artemis' help, Minako was given powers that gave her the ability to take on the persona of Sailor V. But this was long before Luna had awoken Sailor Moon and during this time he acted as her own personal mentor and guardian. Sailor V and Artemis solved mysterious crimes in Tokyo by themselves during this time and identified that all the crimes occurring were mysteriously linked to the dark kingdom. Together they would later reveal themselves to the inner guardians when Sailor Moon faced trouble and at that moment Sailor V would then become Sailor Venus.

Later when the group travels to the 30th Century with Chibiusa to the Crystal Palace in Crystal Tokyo, it is revealed that he and Luna in the future have a daughter named Diana. 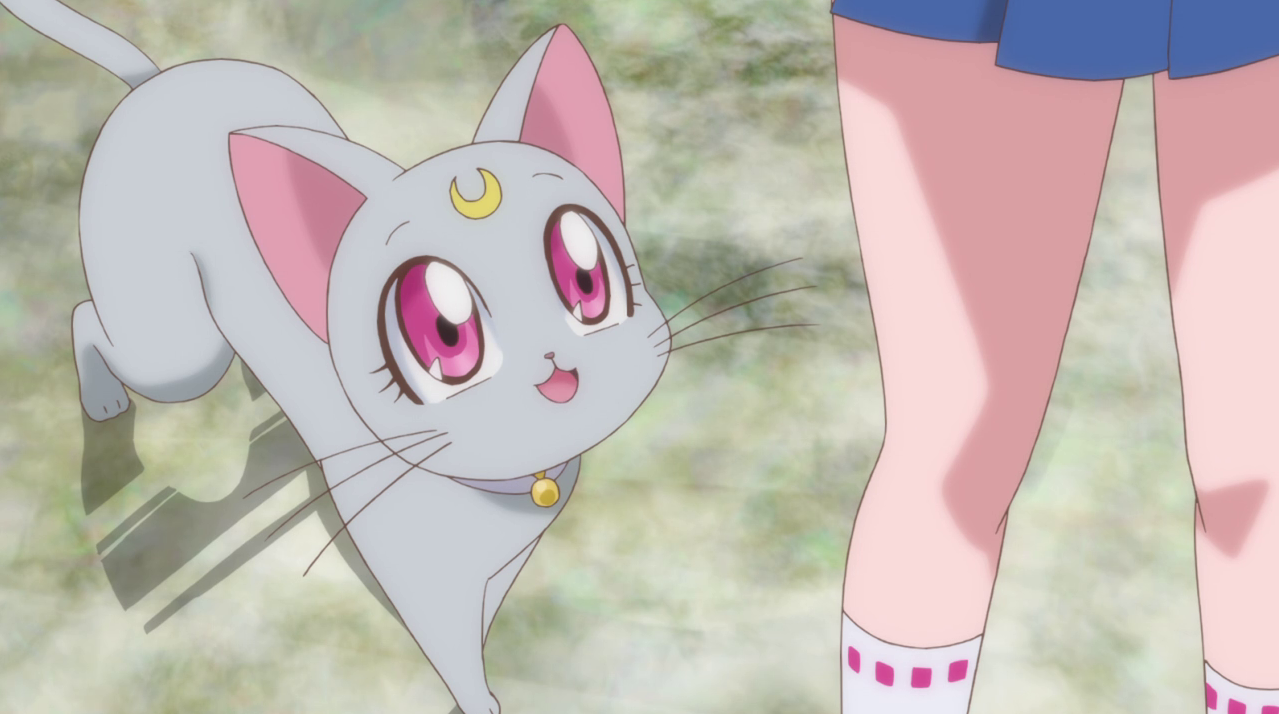 Diana is a small grey kitten with large pink eyes and a grey collar. Diana is later introduced in the series when Chibi-Usa takes Sailor Moon, Makoto, Sailor Venus and Luna to the 30th Century. During this time, she resides in the Crystal Palace in Crystal Tokyo with Chibi-Usa as her guardian with her family. It is then revealed that she is the future daughter of Luna and Artemis. During the assault by the Black Moon on Crystal Tokyo she stayed behind at the Crystal Palace with Luna and Artemis. Besides this, there is no other information about her revealed at present in the show.