All About Ymir in Attack on Titan: Fair is Foul, and Foul is Fair 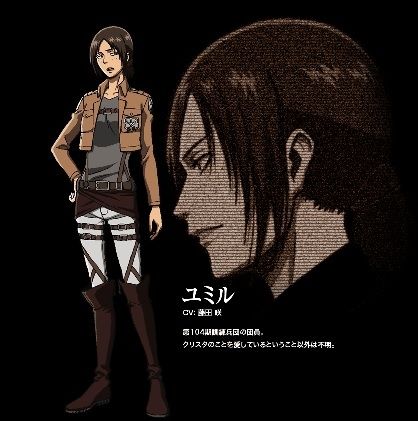 Officially not much is known about her except the fact she loves Krista...and she speaks like a man. Note her family name is not mentioned, only the given name “Ymir”. Now she belongs to the Survey Corps.

Following the conversation between Ymir and Bertolt, it is revealed that she was outside of the Wall eating humans over 60 years... 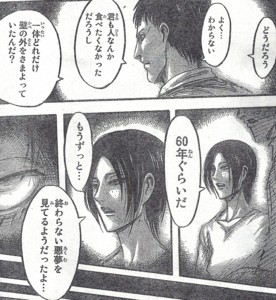 …which means she is now over 70 years old!

Unlike Annie’s Titan form, Ymir’s doesn’t appear to have a female shape, and is relatively small compared to the other Titan Shifters. 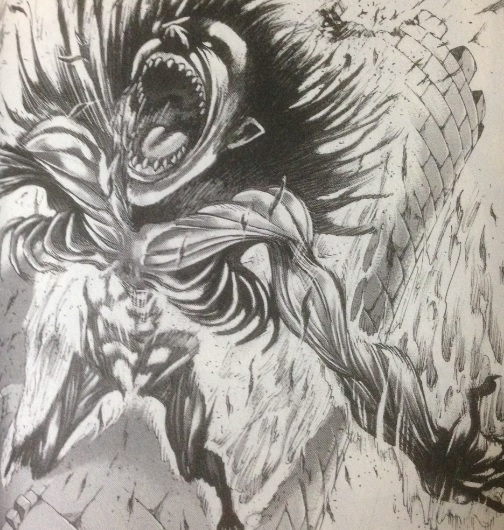 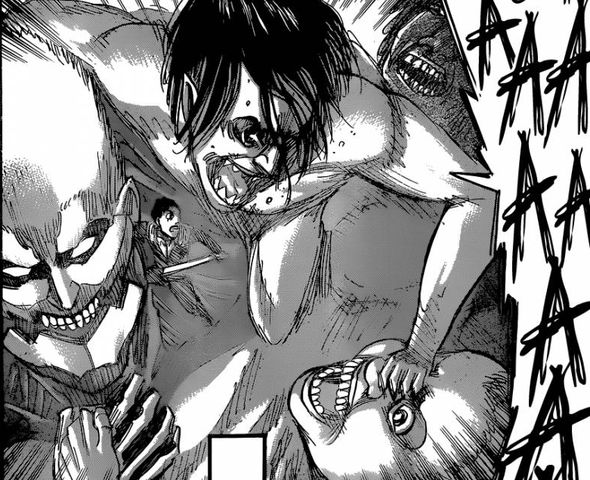 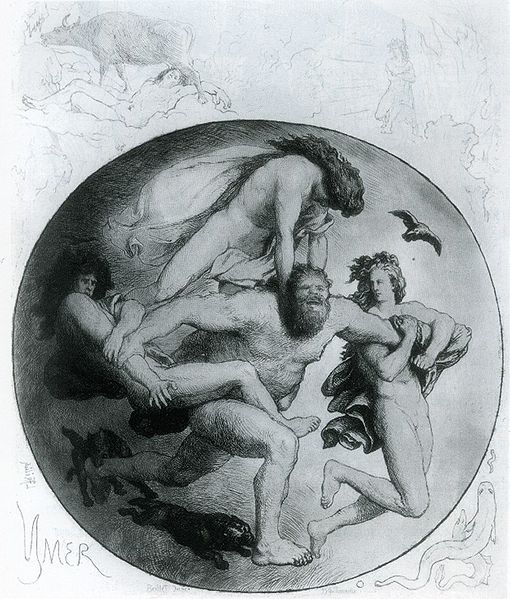 Ymir’s name is mentioned in The Poetic Edda. A giant is born in the place where fire and ice meet, and it gave birth to a male and female. The giant is a “hermaphroditic” being, and is “androgynous” so that it’s hard to tell if it is a he or a she, a god or goddess. Ymir was killed by the brothers Odin, Vili, and Vé. They made out of Ymir’s flesh the Earth (or the goddess Jörð), from its blood ocean, from its bones hills, the skull became the sky, the brain clouds and the hair trees. It is said that the maggots out of Ymir’s corpse became dwarfs. 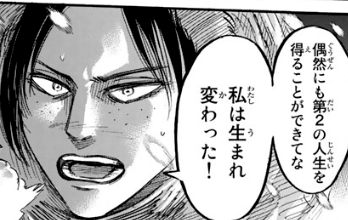 “By a coincidence, I could get my second life. So I was reborn!”

Is her statement just a metaphor? Or is it related to the following conversation between Bertolt and Reiner? 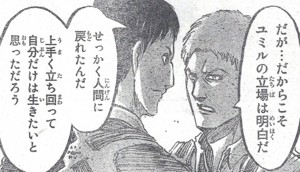 Bertolt: She … ate Beric, didn’t she?
Reiner: Right, but that also explains Ymir’s position clearly. Somehow she finally came back as a human. Now she wants to survive by all means, no matter what happens to others.

In the so-called “Ilse’s Notebook,” in which Ilse Langnar wrote a journal on her encounters with a Titan until her death, there is a statement that the Titan bowed down as if it worshipped a particular human. 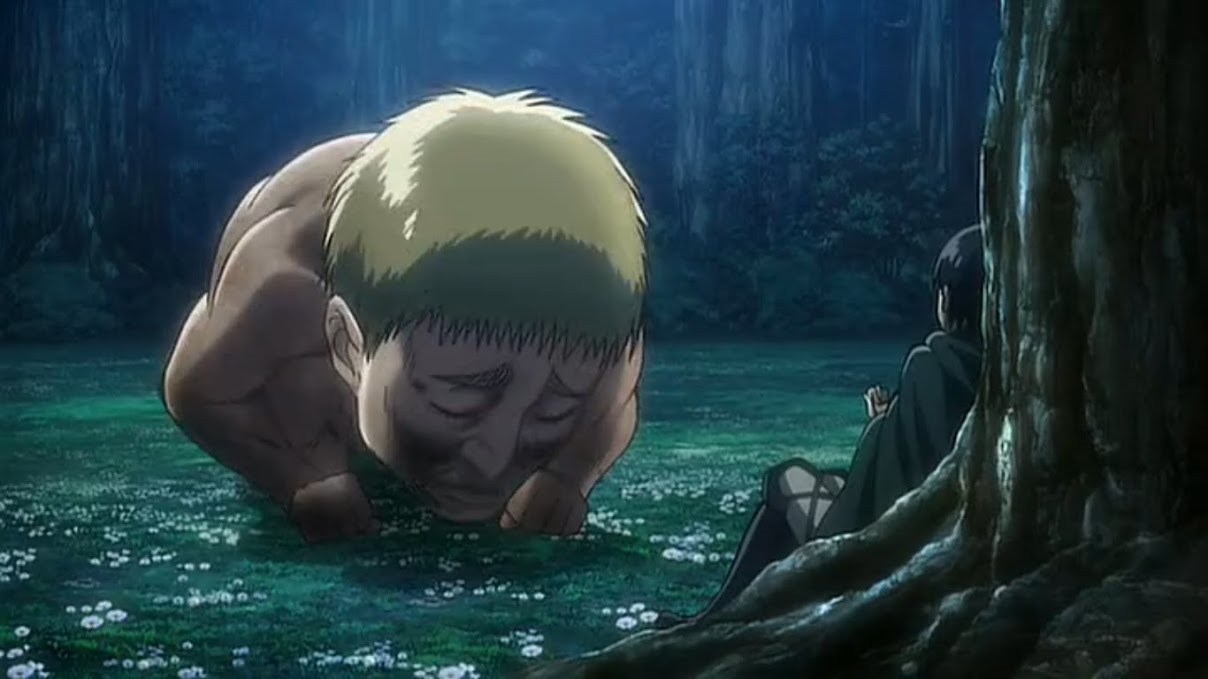 The Titan talked to Ilse and called her; “Ymir-sama” (with “sama” being used to express deep respect or reverence). 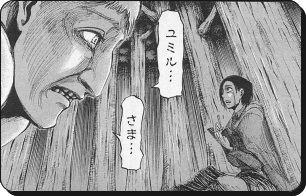 It is said the Titan mistook Ymir for Ilse, possibly because they look like each other.

Is Ymir a Goddess?

Is Ymir the one worshipped by Titans as in Ilse’s journal? Whether Ymir is related to the story or not, she calls herself ‘goddess’ and seems to be happy with the naming. 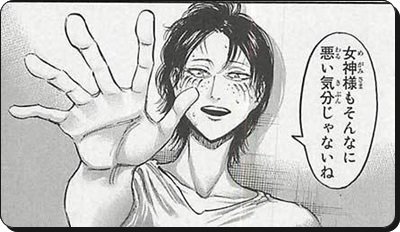 “I don’t feel too bad about being a goddess”

Ymir can read a forgotten language?

Ymir picks up an old tin box and finds out it’s edible ... 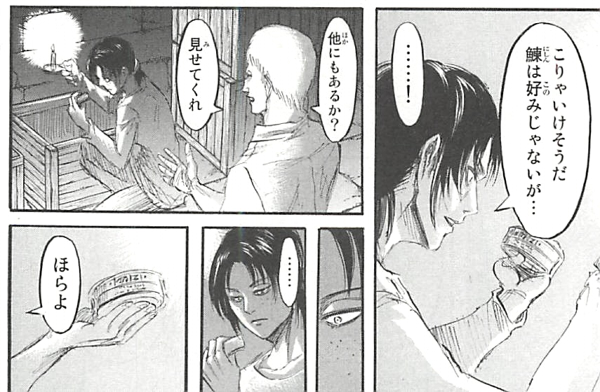 Ymir: This canned food seems edible, although I don’t like herrings.
Reiner: Can you find some more? Let me see that.
Ymir: (After hesitation) here you are.

However, Reiner can’t read the exotic letters on the box.

Reiner: Is this canned food? … What are these letters? I can’t read it. 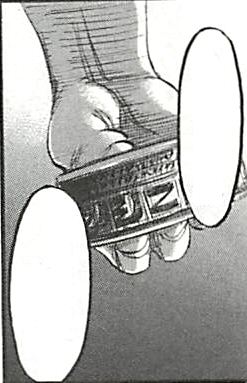 A reader has flipped the last frame, where it spells out ンシニ. Now read it from the right, it says; ニシン (nishin = herring). Does this mean that Ymir can read the writing on the can which Orientals, who died out (except Mikasa as the last descendant), left behind?

Just out of curiosity, what does this tinned herring taste like? 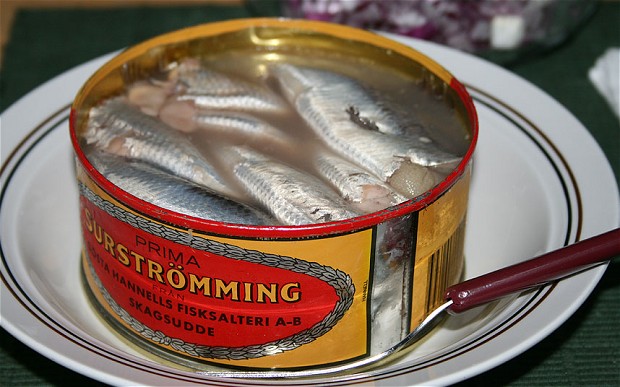 Or is it like this scary-looking Russian product? (That looks like a claw but it's a herring we swear) 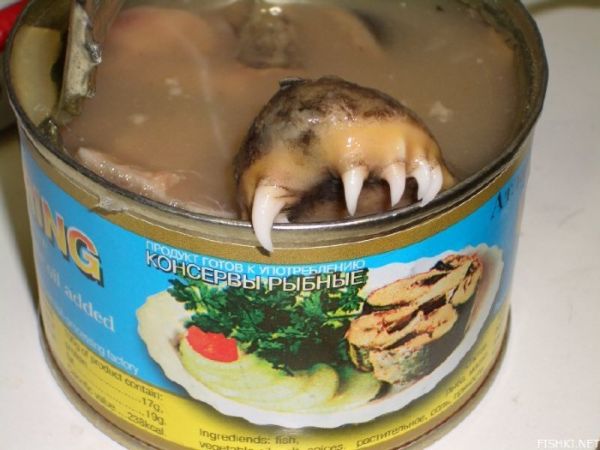 Or maybe these Japanese herrings cooked in sweet-salty sauce? 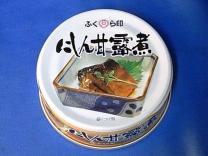 Does Ymir know about the conspiracy?

We have seen many people inside the Wall who are actually Titan Shifters. The question is what are people fighting against? There seems to be a hint in the conversation between Eren and Ymir here below, but they are partially hidden. 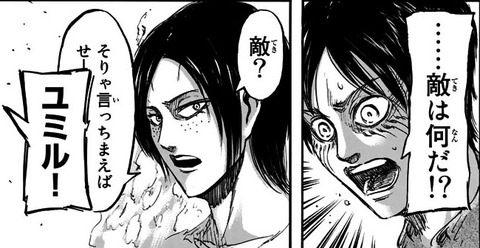 What could be her last word? Could it be the ‘secular power’ (せーふ→せいふ＝’government’)? 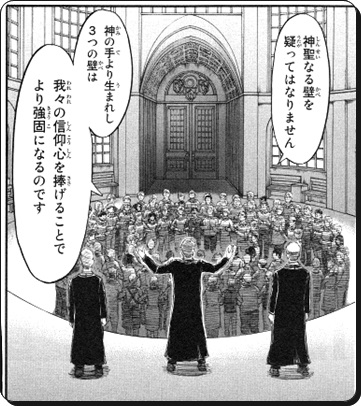 Ymir- Beautiful is Ugly, and Ugly is Beautiful

Despite the fact that one of Ymir’s comrades, Connie mentions she is ブス(busu or ‘witch’ in the sense of ‘ugly woman’), fans don’t always see her like that. Take a look below at some stunning fan art. 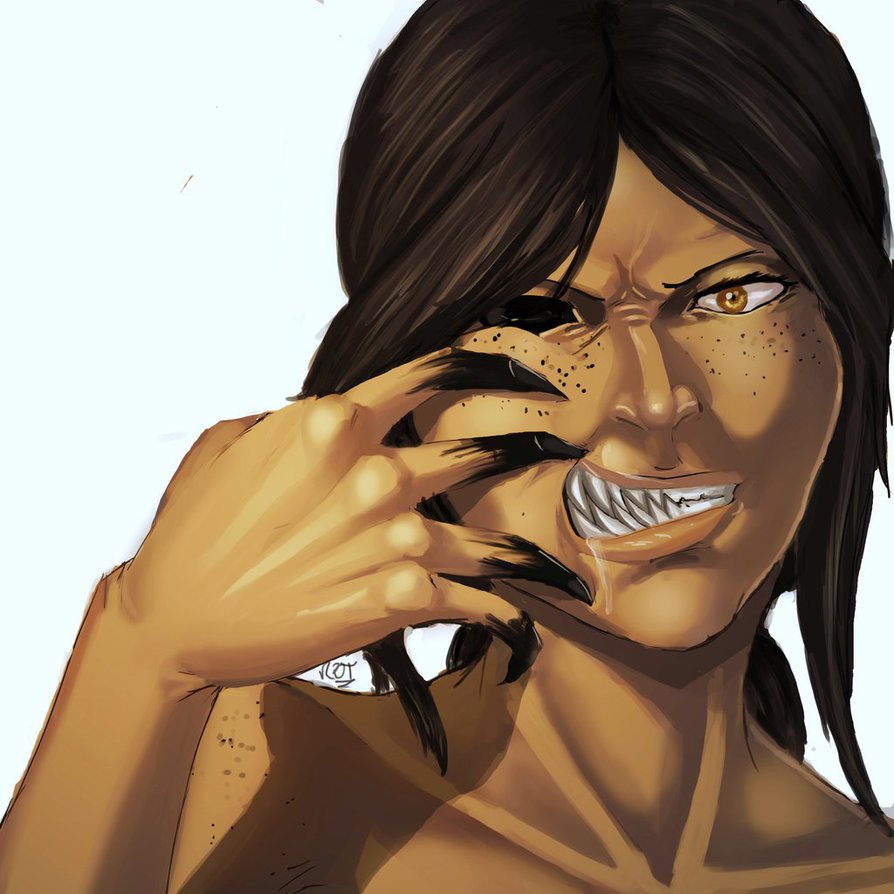 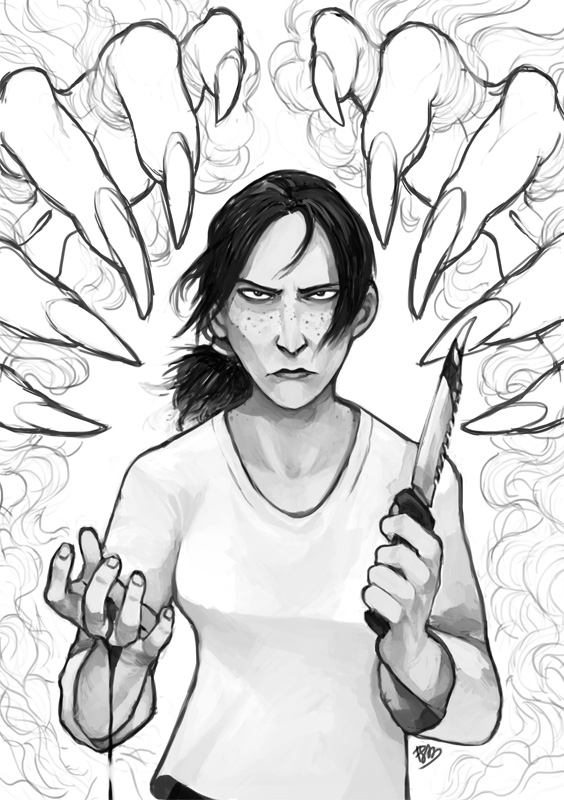 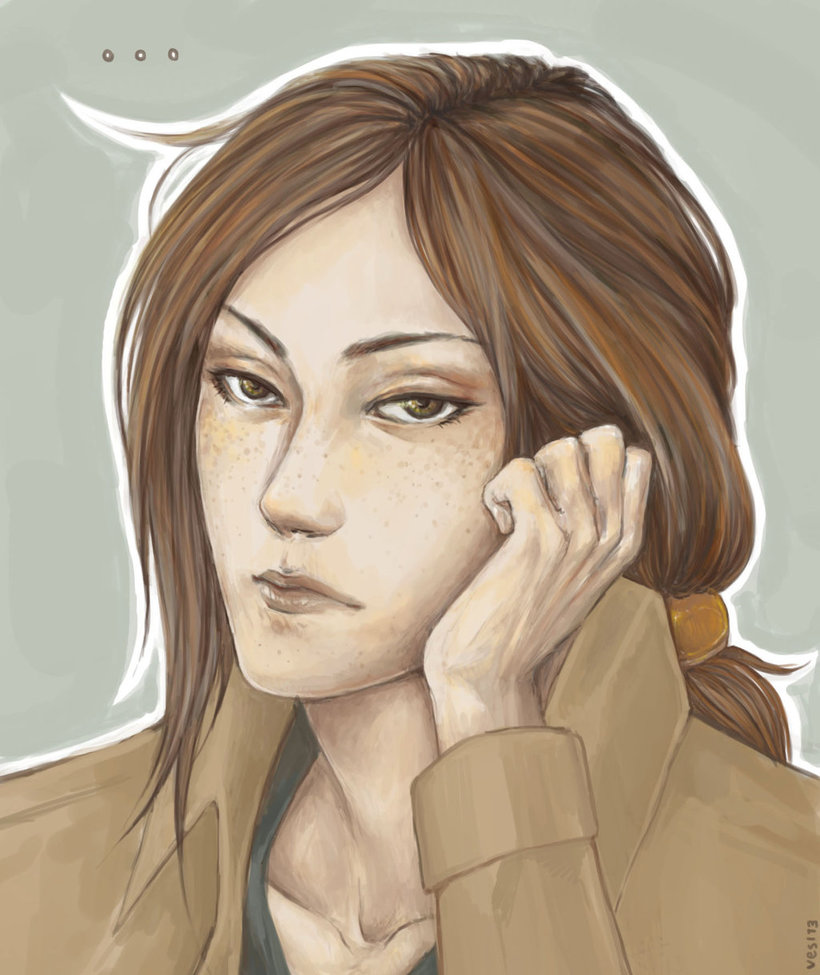 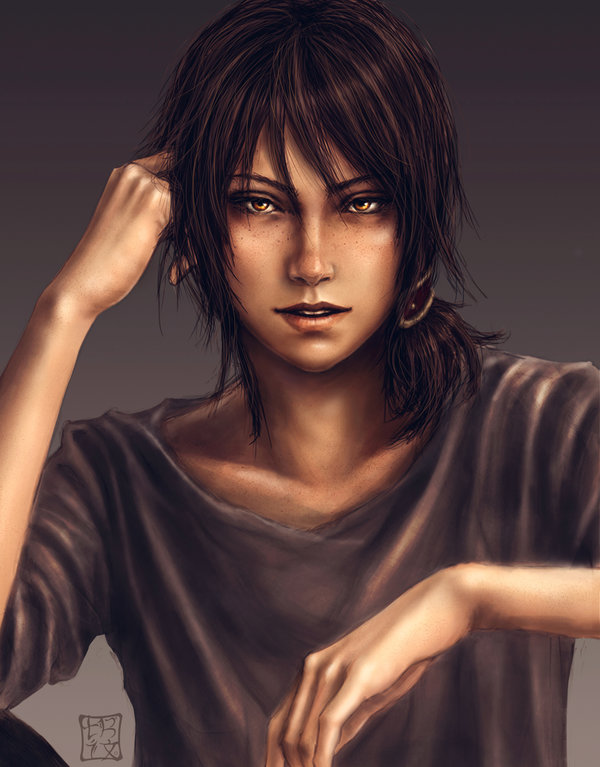 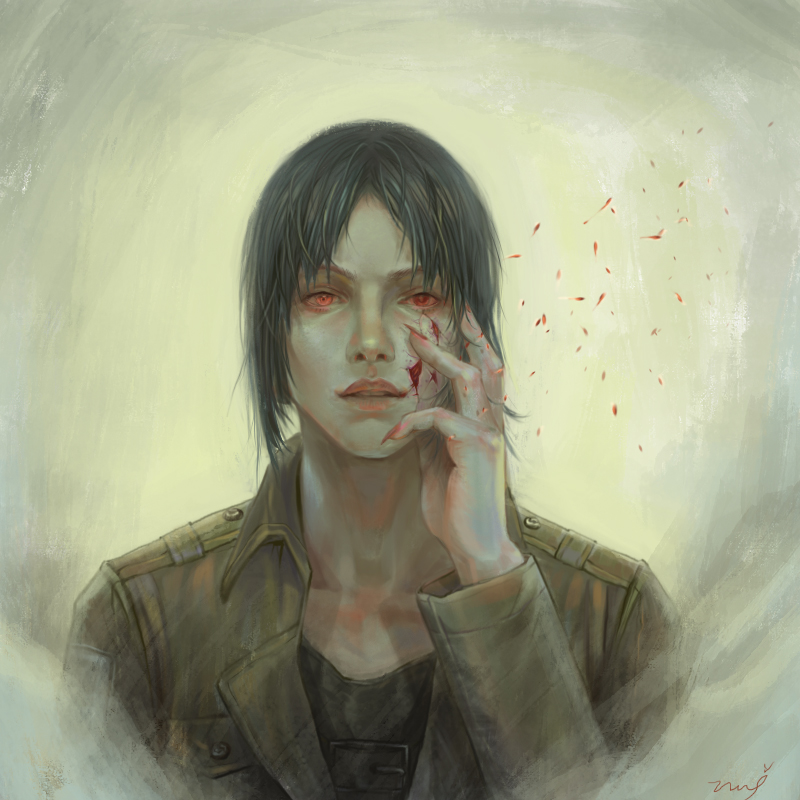 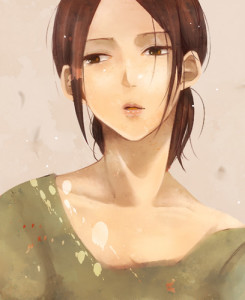 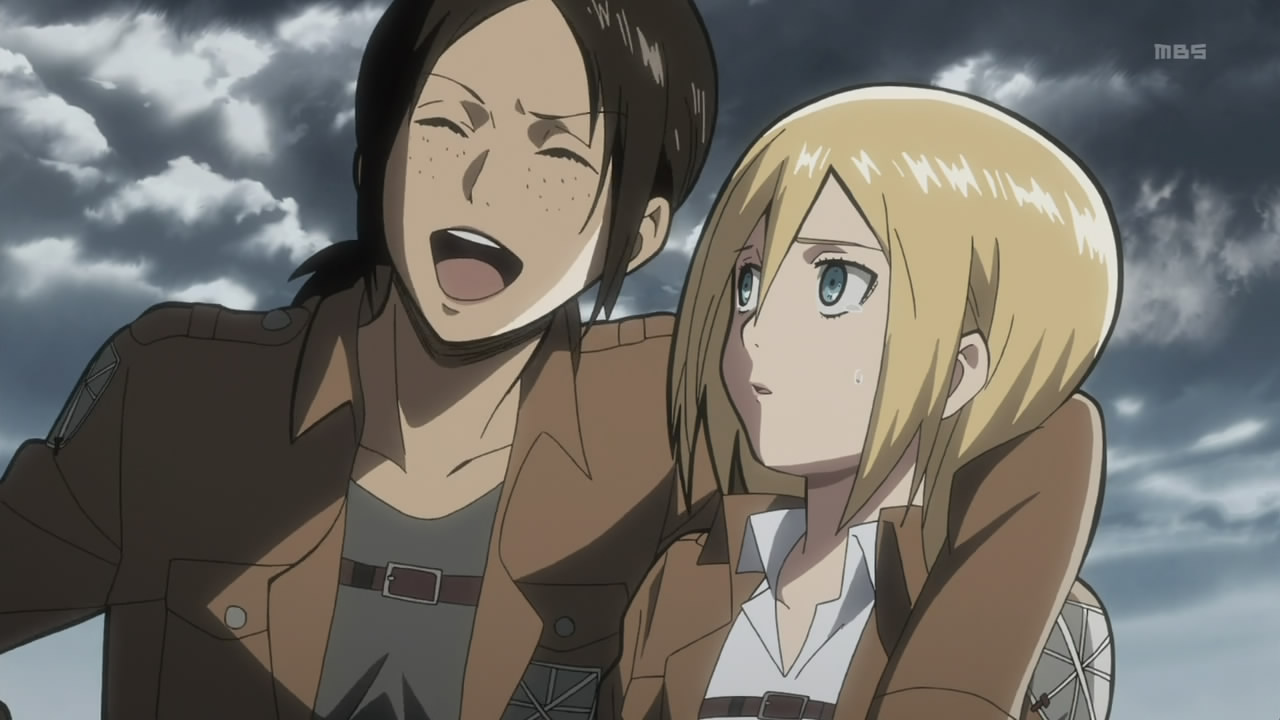 Their friendship inspires a lot of fan-artists! 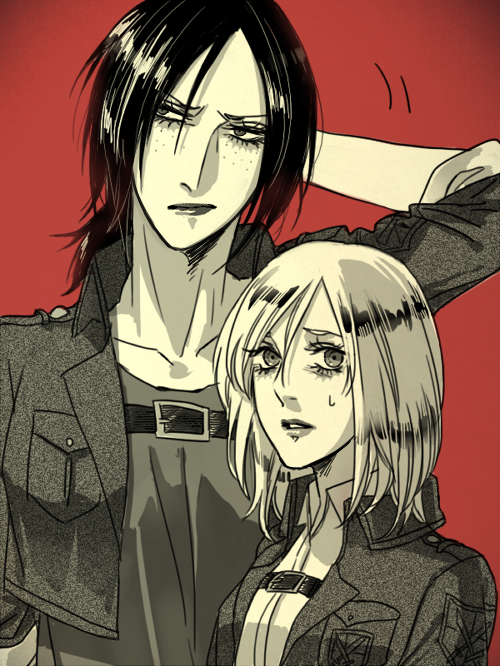 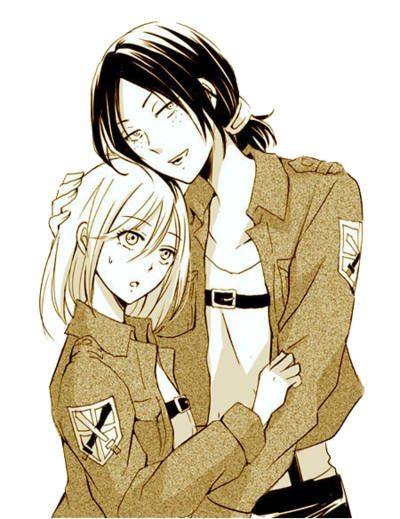 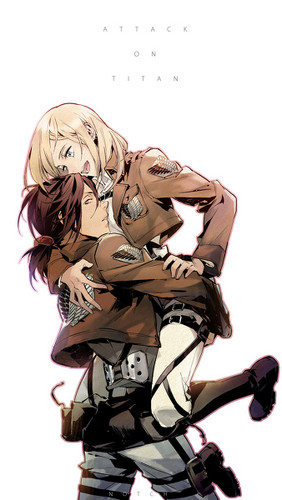 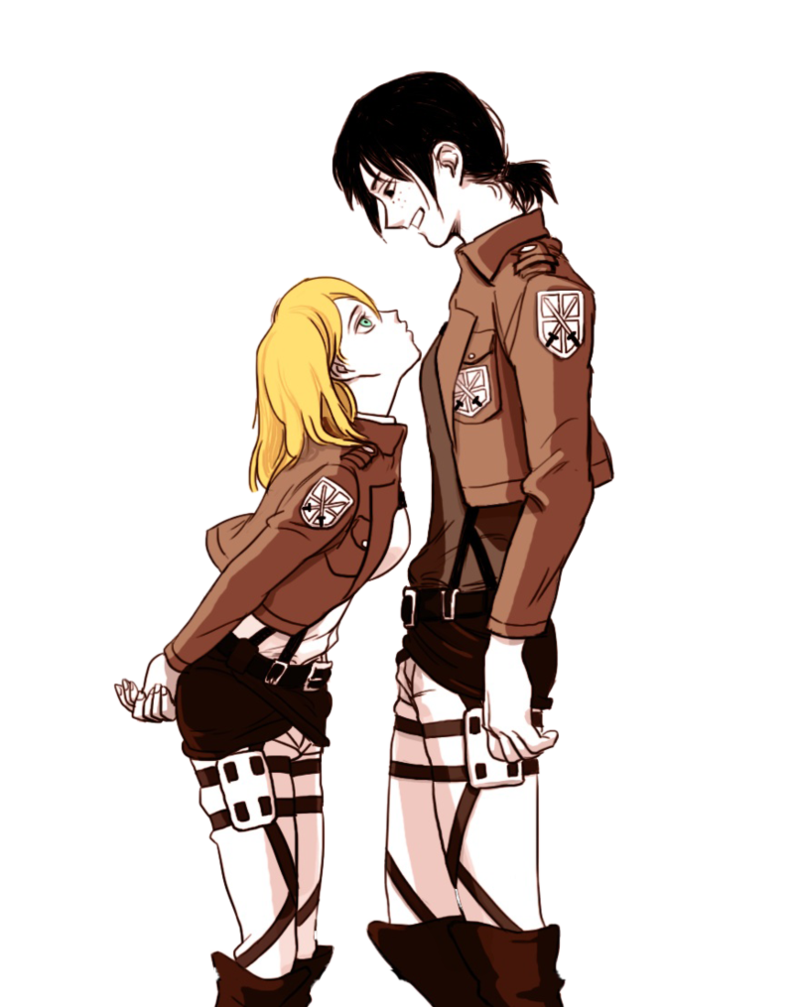 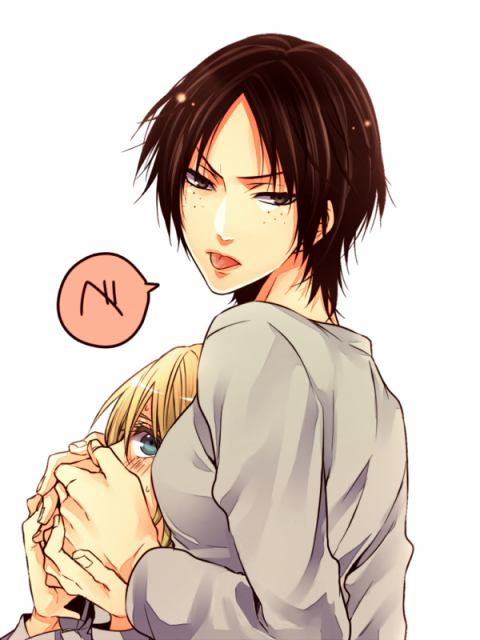 Homosexuality in Attack on Titan?

Ymir and Reiner once joked about each other’s sexual orientation although we don’t know how much of it is true. 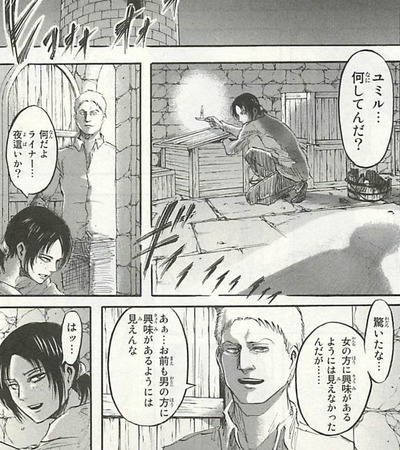 Reiner: What are you doing, Ymir?
Ymir: Hey, Reiner... do you crawl into women’s room in the night? What a surprise … I didn’t think you liked women...
Reiner: Right… it doesn’t seem to me you like men, either.
Ymir: Whatever ...