In Sailor Moon Crystal, Usagi's trademark hair buns always manage to stay in place. Throughout the many challenges she faces and battles she must fight, our pretty guardian maintains her perfectly coiffed hair buns. Thus, she has earned the nickname Meat Buns from her friends.

Sailor Moon Crystal, a reboot of the original Sailor Moon anime/manga first introduced in the early 1990s, is the story of Usagi Tsukino. Her friends, the Sailor Senshi, continually make fun of her for her unfailing "meat buns" hairstyle. They have no qualms about calling her "Meatball Head", "Pork Buns", "Buns", and of course, "Meat Buns". Yet, despite the relentless teasing, Usagi is still the Pretty Guardian Sailor Moon, the "Soldier of Love and Justice"!

In Sailor Moon Crystal, Sailor Moon, aka Usagi is teased for her hairstyle in which she wears two buns on top of her head that are reminiscent of Chinese dumplings, or meat buns. She is loyal to the "meat buns" hair style as she never fails to wear her long blonde hair in this manner.

Although we first meet Usagi as a young, careless and free spirited 14-year old girl living in 20th century Tokyo, it is conspicuous that she takes special care to wear her hair in its rather ornate fashion. In reflection of her personality, one might expect that her hair be more similar to the looser and somewhat more carefree hairstyles of her peers. Perhaps the hairstyle reflects the style of her preincarnate Princess Serenity's preferences in terms of dress and style, and that flair carried with her into her subsequent life. After all, she was born into her 20th century self with similar characteristics, preferences, and mannerisms to Princess Serenity. 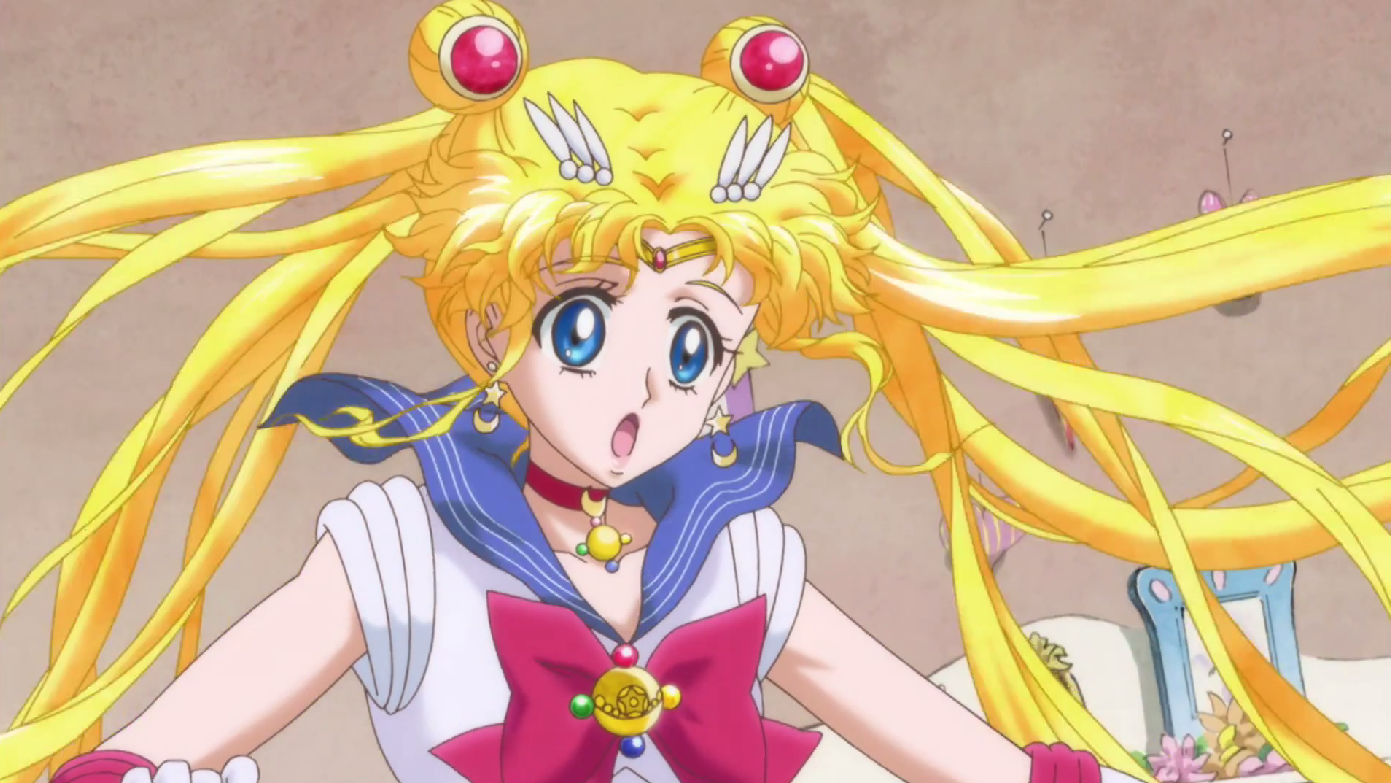 For example, Princess Serenity is known to have been rather childish herself, although becoming quite cold after the destruction of the Moon Kingdom. Before this tragedy, she was known to repetitively disobey her parents to visit Earth out of curiosity, and subsequently for the company and warmth of her love, Prince Endymion. Usagi displays traits of childishness as well, and she and Mamoru grow close, as Princess Serenity and Prince Endymion were. Throughout her life, as she changes and grows physically and mentally, and in her transformations as Sailor Moon, Princess Serenity, and eventually Queen Serenity, the hairstyle is a reflection of the traits, whether conscious or subconscious, that always remain with her. Maintaining long hair is not easy, but Usagi manages to take care of the lengthy blonde locks, styling them perpetually in the semi-elaborate fashion.

The "Meat Buns" nickname given to Usagi by her friends is representative of the closeness among the Senshi. Nicknames in Japanese culture are used only between close friends or among family members. In fact, when first meeting someone, it takes familiarity before one even calls another by their first name. To be fair, Usagi and her Senshi have a closeness that even they were not conscious of initially, as they were friends in their pre-incarnated versions when Usagi was Princess Serenity of the Moon Kingdom. 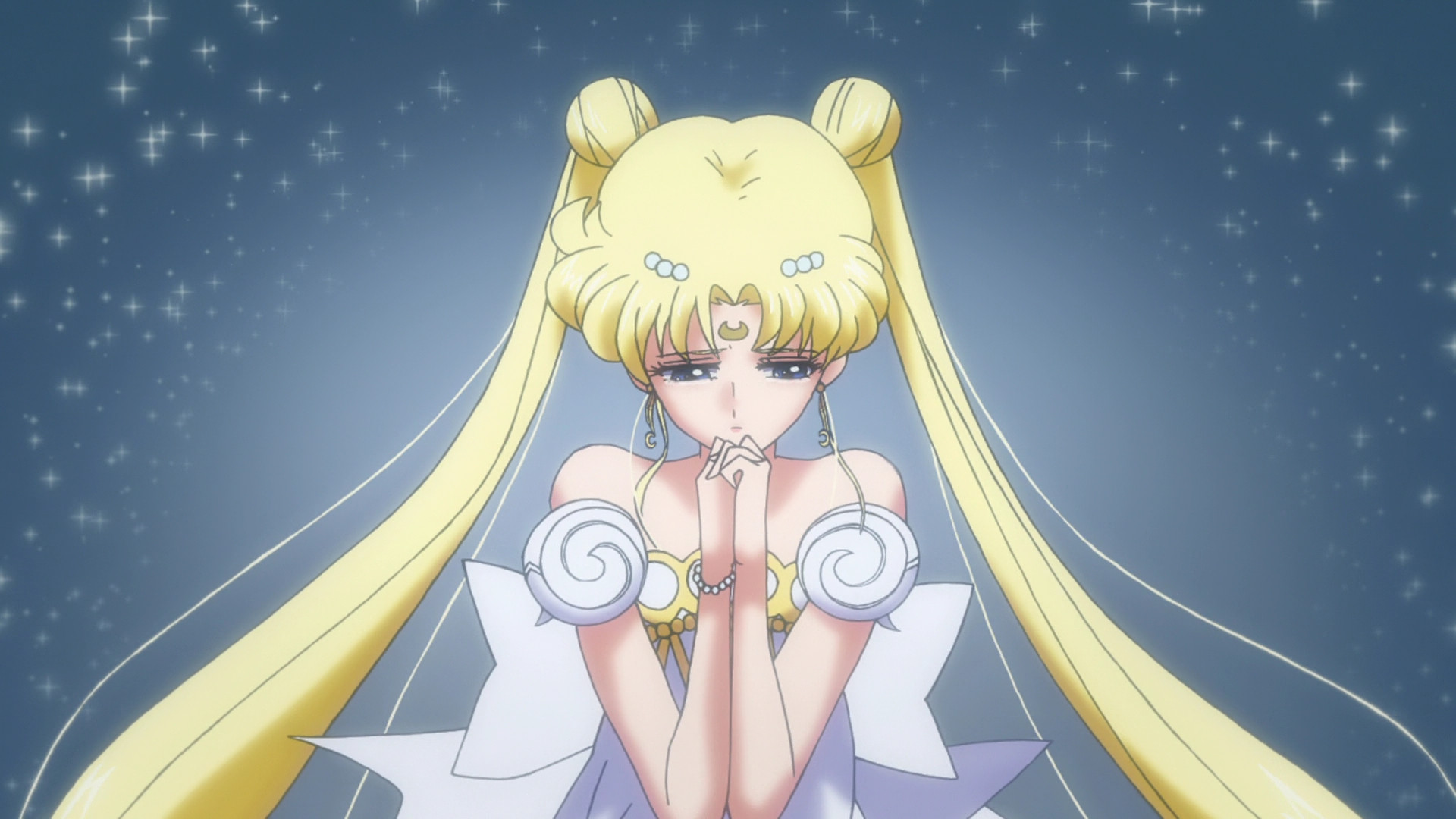 Each of the Senshi were princesses of their own planet. The friends include the highly intelligent Ami Mizuno as Sailor Mercury, aspiring idol Minako Aino as Sailor Venus, Minako's easygoing male feline friend Artemis -especially albeit his being named after a female goddess; an outcast delinquent transfer student from another school named Makoto Kino as Sailor Jupiter, and Rei Hino as Sailor Mars round out the Sailor Senshi. Rei is a shrine (jinja) maiden or Miko, which is a pure and chaste priestess, usually a virgin, who engages in purity rituals and is practiced in warding off evil spirits- at least this is her aspiration.

They also periodically employ the help of high school student Mamoru Chiba, who's alternate is Tuxedo Mask. As mentioned, her friend Mamoru was Prince Endymion of Earth in his pre-incarnated role. It didn't come across as princely, however, when Mamoru first teased Usagi on her hairdo, calling her buns, or dumpling head. She certainly did not take to the teasing lightly in the beginning. For example, in one instance she becomes angry and throws the meat buns that she is eating at Mamoru. Fans of Sailor Moon, however, make no qualms about confessing their love of the hairstyle, even recreating and wearing the same style themselves, complete with odango shields ,blonde hair and all of the how-to videos needed to assist with the accomplishment. 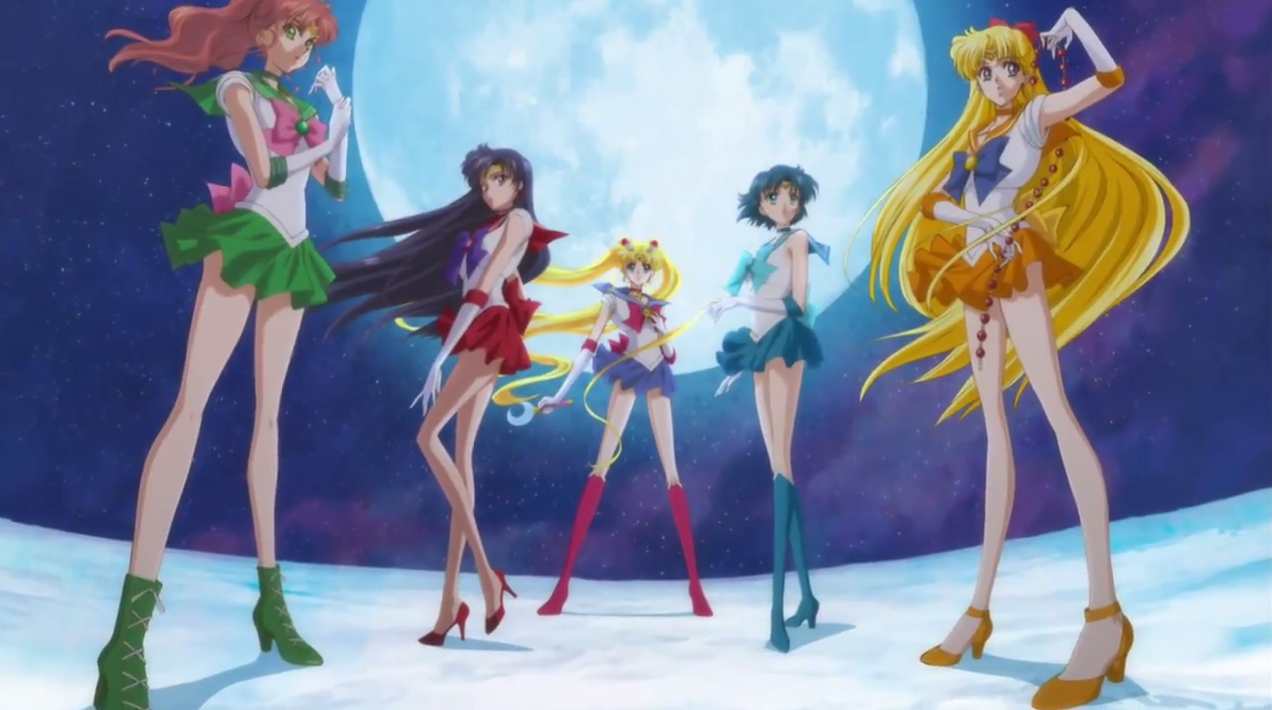 Although the two little buns on top of Usagi's head are reminiscent of dango, or dumplings, to be fair, the Sailor Moon crew feels free to frequently tease one another on various other matters. For instance, even Artemis the white male cat who is guardian to Minako, aka Sailor Venus, is periodically teased for being named after a female: the Greek goddess Artemis, who was the daughter of Zeus and Leto!

After Usagi comprehends that she is Princess Serenity reincarnated, her hair grows even longer. In fact, at one point, Usagi's hair grows so long that she needs support from her friends to groom the long locks. They carefully assist her in trimming, styling, and re-pinning her double buns securely in place. 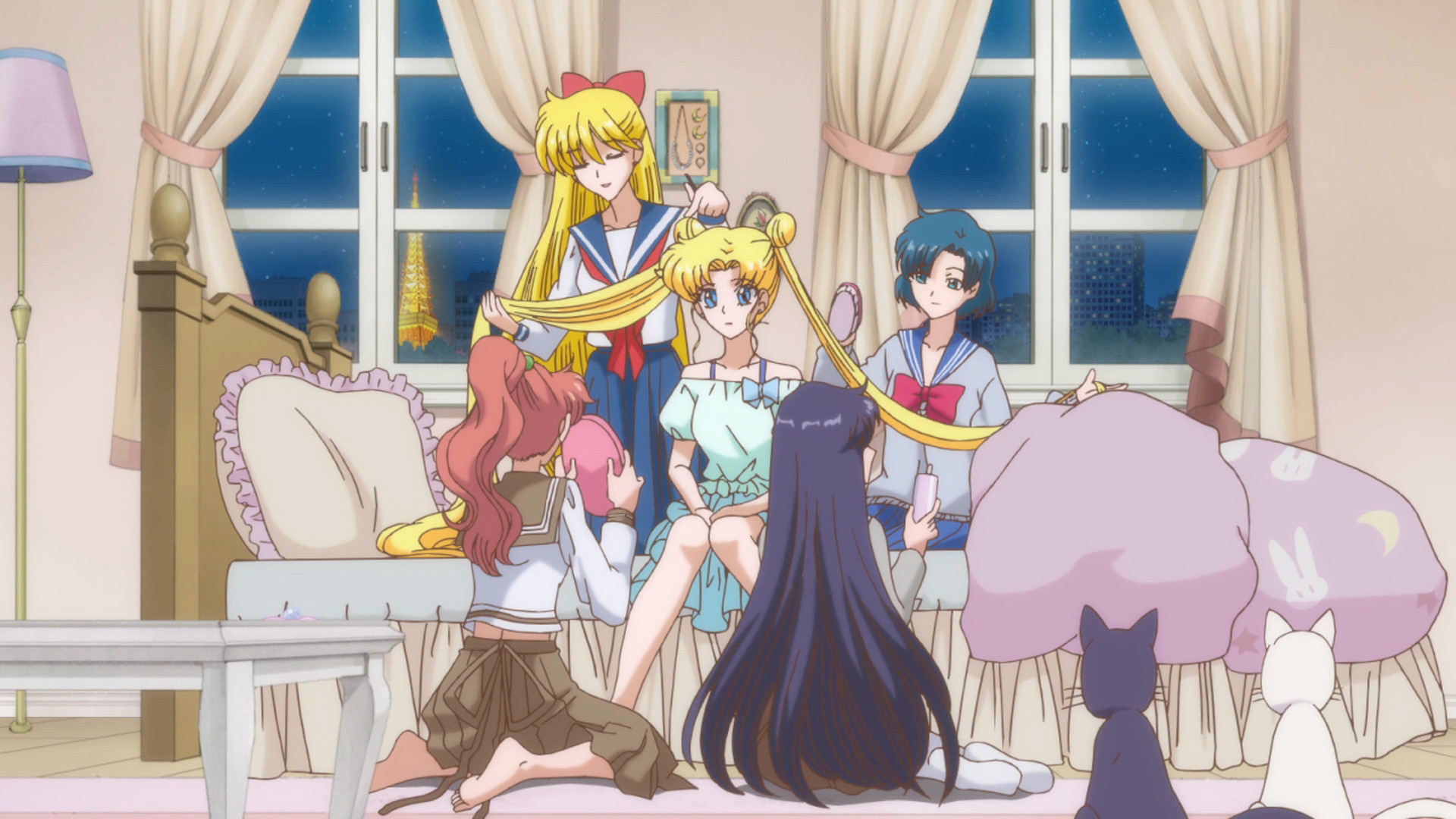 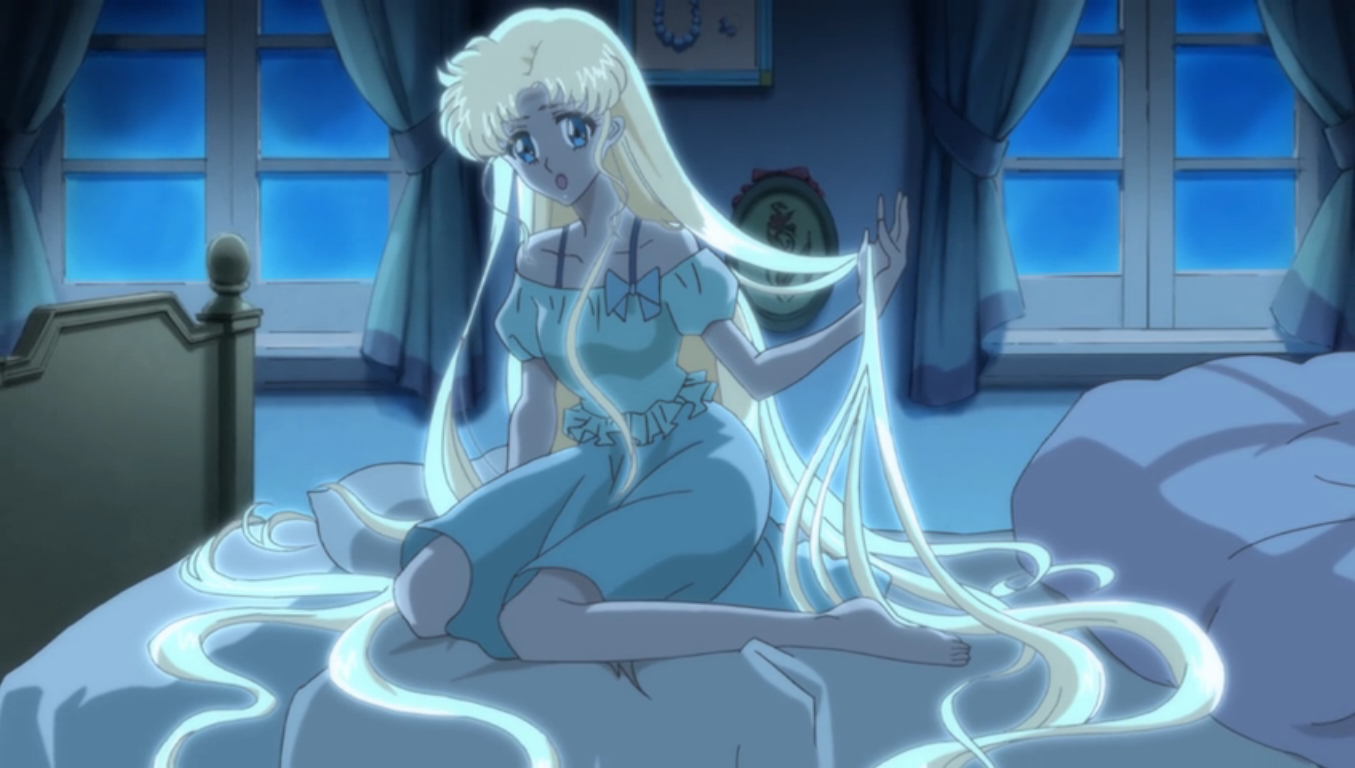 When she is Princess Serenity, as her hair begins to grow to lengths beyond her control, her hair starts to take on a glow, perhaps reflective of the fact that she is beginning to retain power in the long tresses. In a couple of extremely rare instances, Usagi actually uses her so-called meat buns hairstyle as a source of power, though this is very rarely seen in the Sailor Moon Crystal series. Her feather barrettes, as well as the double buns with their red guard, tend to only be used for minor defenses.

In the beginning of the series, Sailor Moon uses her buns to amplify the shrieking of her voice, thus hurting the enemy. She also hears the voice of her best friend Naru through them at one point, and is able to talk through them. They also serve as antennae in another episode when she can hear Chibiusa's screams through them. However, they are not used as a source of power very often, as it is implied in the series that the villains can become immune to them. The pretty guardian certainly does have other power sources to use.

It is interesting to note that Chibiusa, also referred to a Chibi Moon, sports her hair in an altered version of the meat buns that Usagi wears, as her pink hair resembles rabbit ears atop her head. This is a fun cue for viewers early on that Chibiusa Tsukino and Usagi are bonded somehow.

Although called Chibiusa, her real name is actually Usagi, the same as her mother's, with "Chibi" meaning "small person", and "usa" being short for "Usagi". In the future, Chibiusa is lovingly called Small Lady by her parents Usagi and Mamoru, then Queen Serenity and King Endymion.

Being Usagi's, or Meat Buns's daughter from the future, it makes sense that Small Lady's hairdo would have the artistic touch and family resemblance of her mother's. After all, Sailor Chibi Moon translates as "Sailor Mini Moon", apparently Meat Buns's, little Mini-Me. Usagi and Chibiusa have different hair colors and lengths, but the double buns atop their heads remain similar. Chibiusa even sometimes wears the same decorative feather jewelry above her bang that her future mother does. 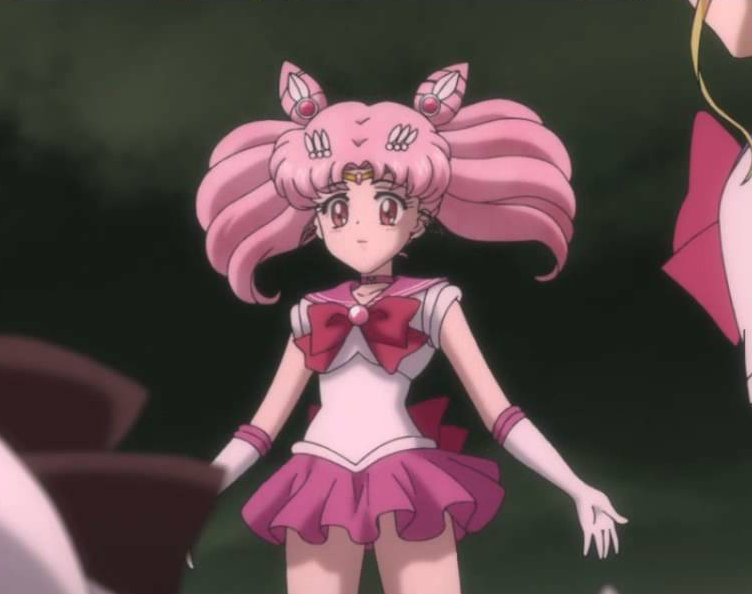 It is significant that although Usagi is seen as rather careless and immature, the so-called crybaby's long hair and carefully done meat buns are always a dependable part of the pretty guardian's physical adornment as a young girl, and throughout her precarious journey as Sailor Moon, as Princess Serenity, and beyond. In a nutshell, Usagi's semi-elaborate hair is clearly symbolic of the continuity that exists in her eternal journey throughout different transformations and reincarnations.

In the Name of the Moon: Sing the Sailor Moon Crystal Opening!