Important Towns in Attack on Titan

Towns play an important role in Attack on Titan (Shingeki no Kyojin). Not something you'd expect when everyone lives in a giant walled city, but it's true. Major events and turning points crucial to the plot take place in towns, so let's go get familiar with them!

In Shingeki no Kyojin, or Attack on Titan as it's known in English, man-eating giants have devoured most of humanity. In order to survive, what's left of the human race has retreated behind towering walls to keep them safe. While this stronghold is certainly big, the fact that all of humanity lives behind these walls should tell you just how much their population has dwindled thanks to the giants! 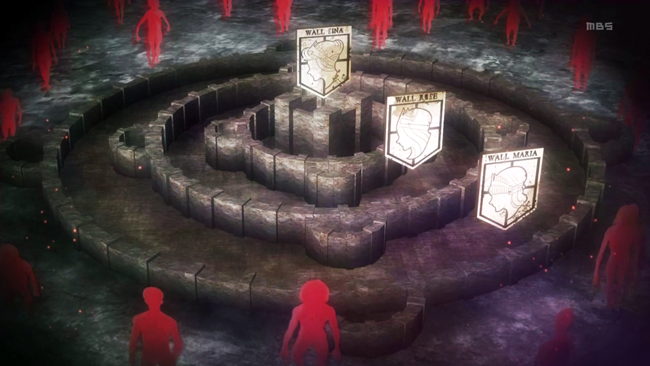 Humanity's last stronghold is divided into three concentric circles, each marked by a wall. The three walls are named Wall Maria, Wall Rose, and Wall Sina. While it sounds cut-throat, it's a sound strategy to ensure humanity's continued survival. By dividing the human populace between these three walls, it makes sure that pockets of humanity will live on should one of the walls fail.

Of course, it can be pretty daunting to guard the entire length of the walls from the giant attacks. There just isn't enough manpower to do that. To that end, each wall has four adjacent towns that jut out. Because giants are attracted to large concentrations of people, they naturally gravitate toward these towns. Even though these locations basically function as bait, they do make guarding the walls easier. Instead of worrying about the entire length of the walls, the military has focused their efforts on the defense of these towns. 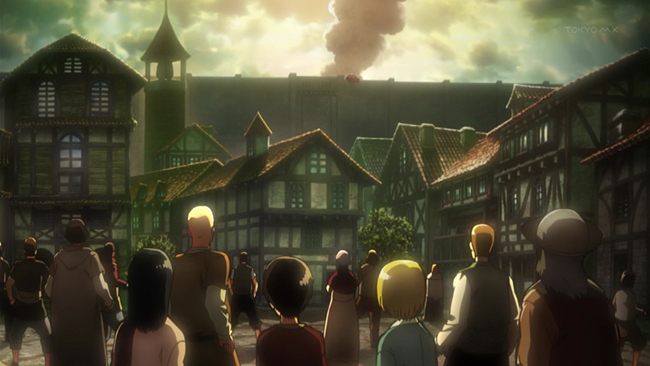 The Shiganshina District is a town located on the southern edge of Wall Maria. It is the original hometown of series protagonist, Eren Yeager, and his friends, Mikasa Ackerman and Armin Arlert. As the outermost wall, Wall Maria is prone to giant attack. Despite this, the people who dwelled in the Shiganshina District didn't live in fear because the Garrison branch of the military did their jobs and successfully protected the walls.

That changed in the year 845. Prior to this, no giant had ever managed to break through the walls. They tried, of course, but to no avail. But in the year 845, the Colossal Titan and the Armored Titan made their first appearance. Because of his massive size, the Colossal Titan was able to kick through the front gate leading into Shiganshina. And thanks to his powerful body, the Armored Titan was then able to break through the back gate, leading into the walled territory kept behind Wall Maria.

Because of the two titans' combined efforts, humanity had no choice but to abandon Wall Maria and retreat behind Wall Rose. Not only was it the first time the walls had ever been breached, it was also the first time a town had been attacked in over a century. To say that this event left a mark on humanity is an understatement. 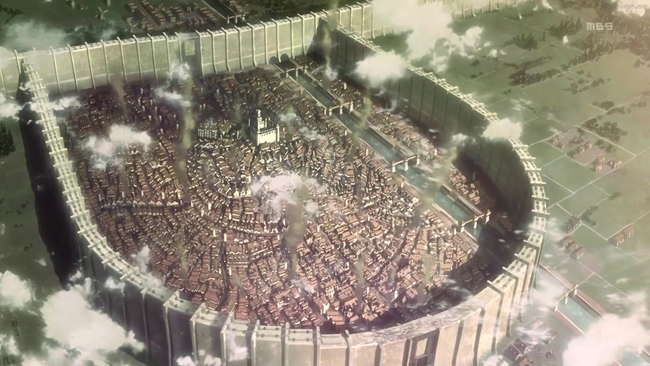 The Trost District is a town located on the southern edge of Wall Rose. Due to it being located closest to the hole in Wall Maria, it often suffers attacks from titans. Eren's rival, Jean Kirstein, is from Trost. Despite its vulnerable position, the town remained safe for five years after the fall of Wall Maria.

However, just as the 104 Trainee Squad was about to graduate, the Colossal Titan makes another appearance and breaches the front gate much like he did in Shiganshina. What was supposed to be a hopeful time for the 104 Trainee Squad turns to terror as they must defend Trost from the titans' onslaught and prevent Wall Rose from suffering the same fate as Wall Maria. 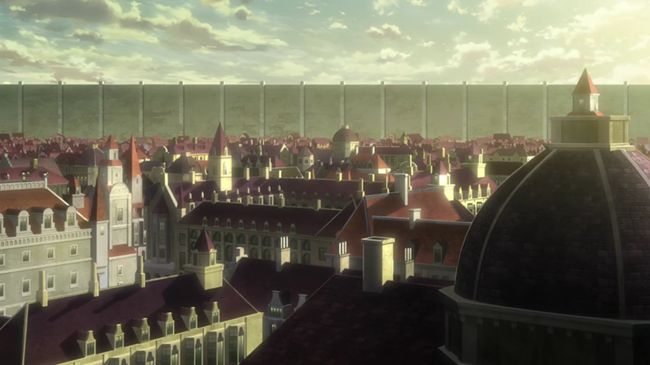 The Stohess District is a town located on the eastern edge of Wall Sina. What's noteworthy about it is that there are many underground tunnels running beneath the town. Considering that it's adjacent to the innermost wall, you would assume that Stohess would be safe from titan attack. It's a fair assumption and one that many people make, not just by those who live there. One of the reasons why people dream of joining the Military Police is that it means they can live inside Wall Sina, far away from titans. It's a place where humans have become complacent and the threat of titan attack is only a distant nightmare.

Unfortunately, those assumptions are destroyed when the troublesome Female Titan makes a shocking appearance. Even though the Military Police is the branch with the most skilled soldiers, they're still caught off-guard by this startling turn of events. Nothing could have prepared them for this. So just as the citizens of Shiganshina and Trost learned, they discover that no one is safe from the titans, not even those who live in the heart of humanity's last stronghold.

Shiganshina, Trost, and Stohess are three towns where major events in Attack on Titan have taken place. No doubt more towns and significant locations will be introduced in the future. Who knows what secrets and shocking plot twists they will hold?