Senran Kagura is an anime dedicated to giving a glimpse into the secretive world of shinobi through the eyes of girls currently working on their craft. Not all shinobi have the same goals and motivations though. Some fight on the side of good, while others reach towards darker entities. 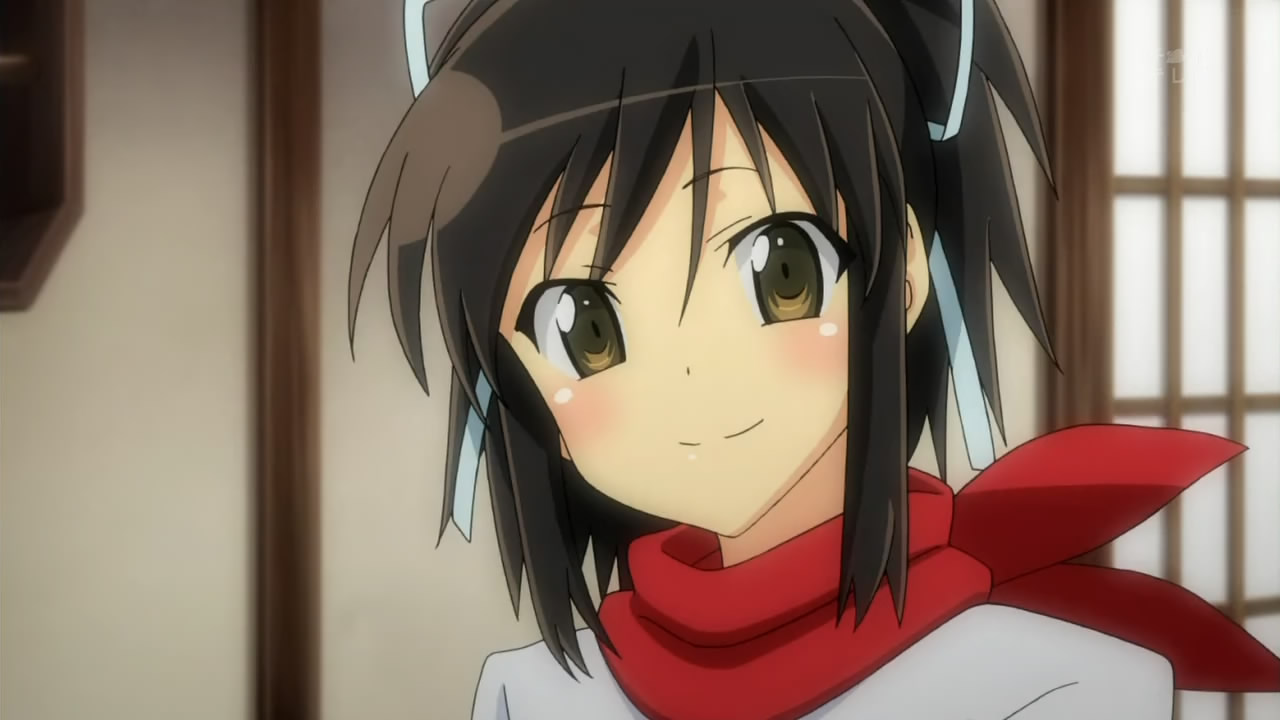 Asuka is an upbeat and cheerful second year student at Hanzo National Academy who happens to be the granddaughter of the legendary shinobi, Master Hanzo. It’s because of her bloodlines that she approaches her training with earnest effort, and wants to become as skilled as possible in order to make her grandfather proud.

Unfortunately, her bloodline is a double edged sword. She has developed an inferiority complex because of people’s expectations of her skill level. The fact that she can be clumsy at times does not help with this regard. She will need to shed this complex and tap into her potential in order to face the challenges posed by the skilled fighters of Hebijo Clandestine Girls' Academy. 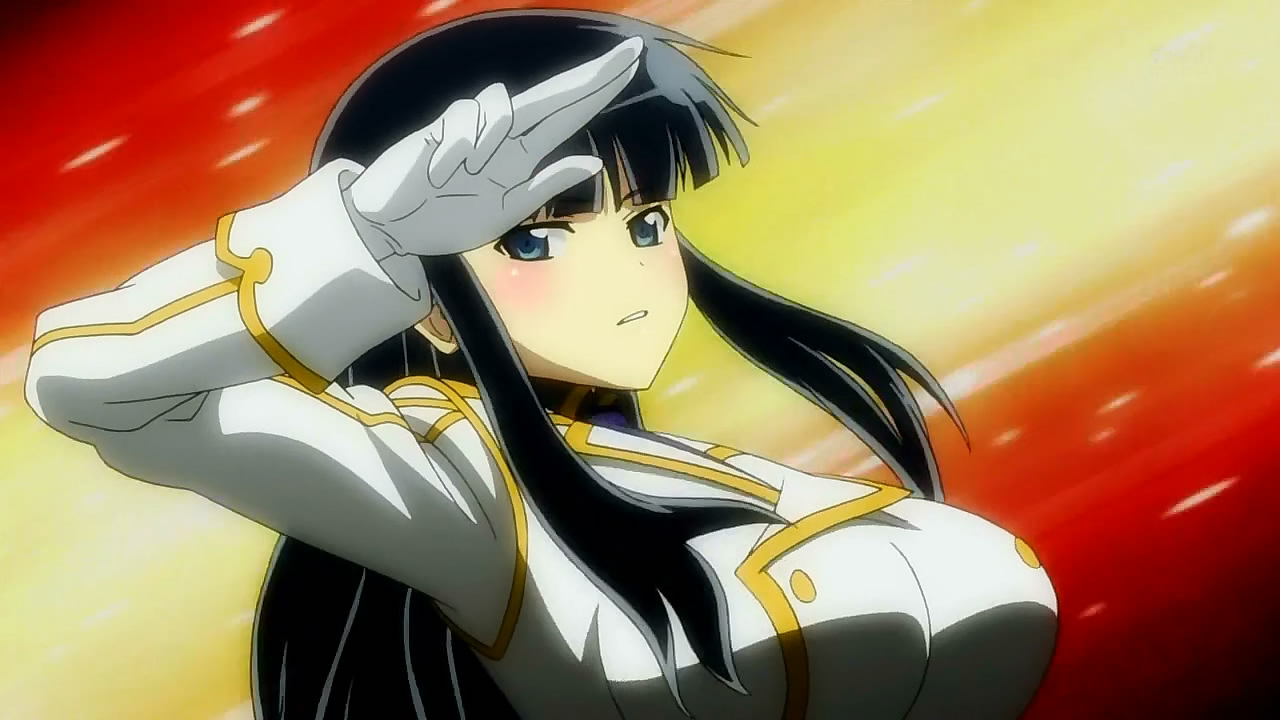 A third year student at Hanzo National Academy, Ikaruga is the very definition of the word “formal.” This trait is embedded strongly within her, having been raised in a family with a lot of wealth, and it’s the reason she is the class chairman. As class chairman she ensures that her fellow shinobi remain on track, truly serving as the glue that holds the five talented girls together.

Her outward demeanor is that of someone who was raised in an environment of privilege, yet it belies her roots of a more common upbringing. What others don’t know is that she is actually adopted in order to carry on the family’s shinobi tradition once it is clear that the lone son isn’t good enough. This will lead to friction between herself and her "brother," as he will end up hating her for being brought in as his replacement.

She will ultimately have the family sword passed down to her, causing a confrontation with her brother. 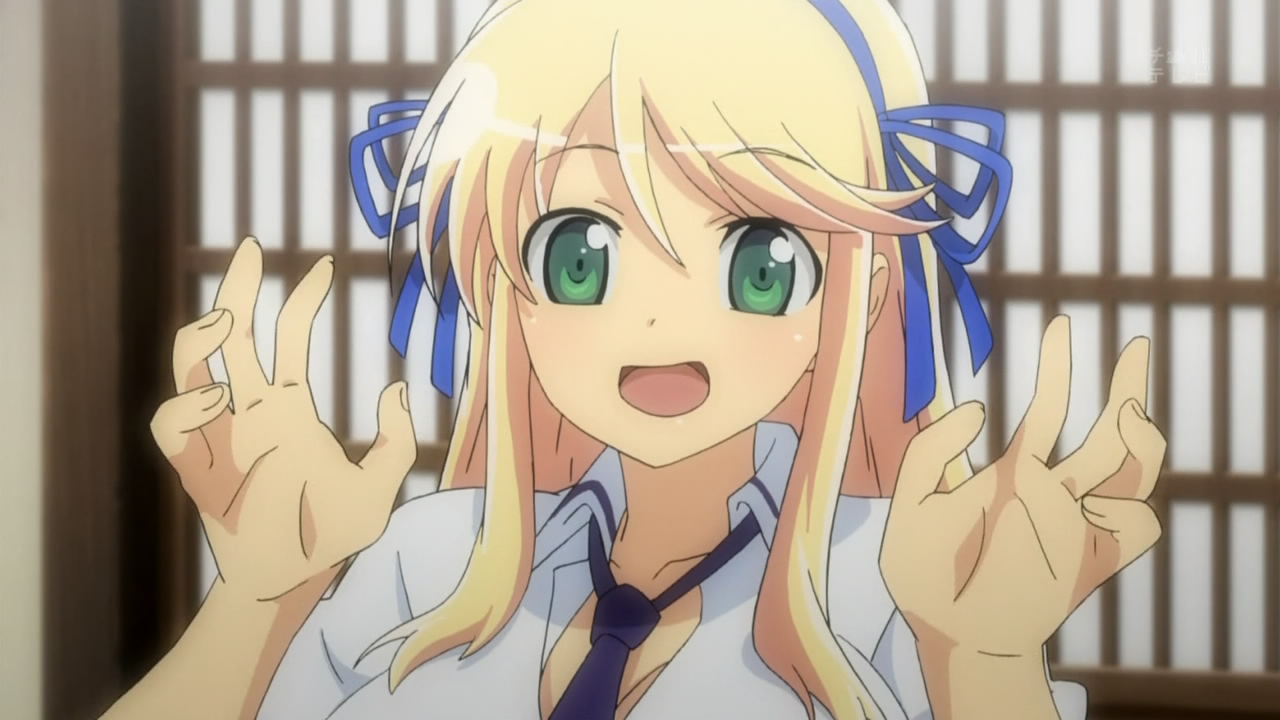 Groping, it’s the thing Katsuragi does best. Fun pillows, cozy cushions, luscious melons; if there’re any more nicknames for breasts then she knows them. She’s a third year student at Hanzo National Academy and started her journey towards shinobi greatness alongside Ikaruga. When the two first met they did not get along, and Katsuragi decided it would be best to break the ice by giving Ikaruga a good “pat down.” Her current focus is trying to get her hands on Asuka’s bouncy assets as often as she can.

When she isn't finding ways to get her grubby hands on Asuka, she is happy to fight a good opponent. She will get the challenge she seeks when she runs into Hebijo's Hikage, who will prove to be a formidable opponent and someone who will get Katsuragi's blood flowing.

She is driven to become one of the best shinobi the world has ever seen to win redemption for her parents. When she was a young child, they failed an important mission, meaning that they would have to forfeit their lives as dictated by shinobi law. Rather than deal with the punishment, they became fugitives, disassociating from Katsuragi so that she would not be held accountable for their crimes. 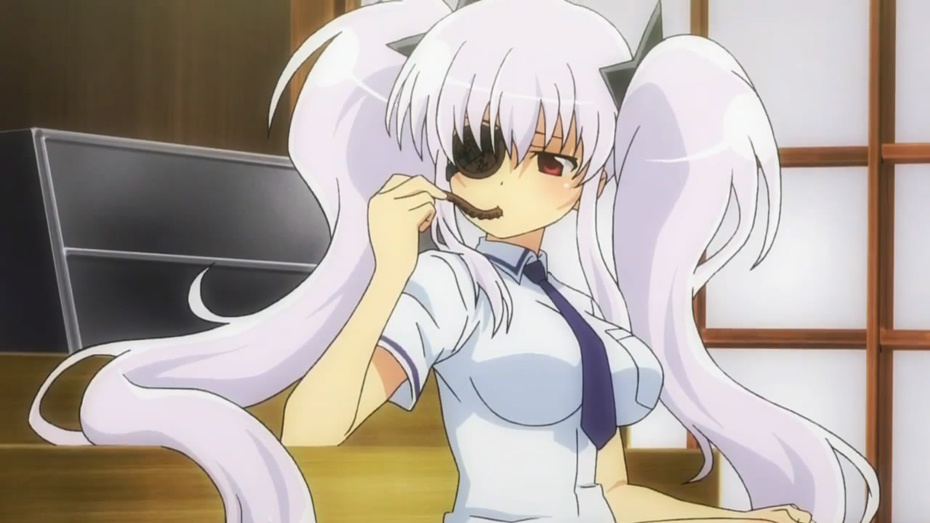 Yagyu is an incredibly talented first year student at Hanzo National Academy, even talented enough to outrank Asuka despite being her underclassman. She has an even-tempered demeanor and rarely has wild swings in emotion. She can often be seen with dried squid in her mouth.

She and Hibari have a very close friendship and Yagyu is very protective of her. The amount of danger doesn’t need to be high for Yagyu to get involved, as she even comes to Hibari’s defense in the middle of a pillow fight. The reason Yagyu looks over Hibari is because she sees her younger sister, who died in a tragic car accident, in Hibari. 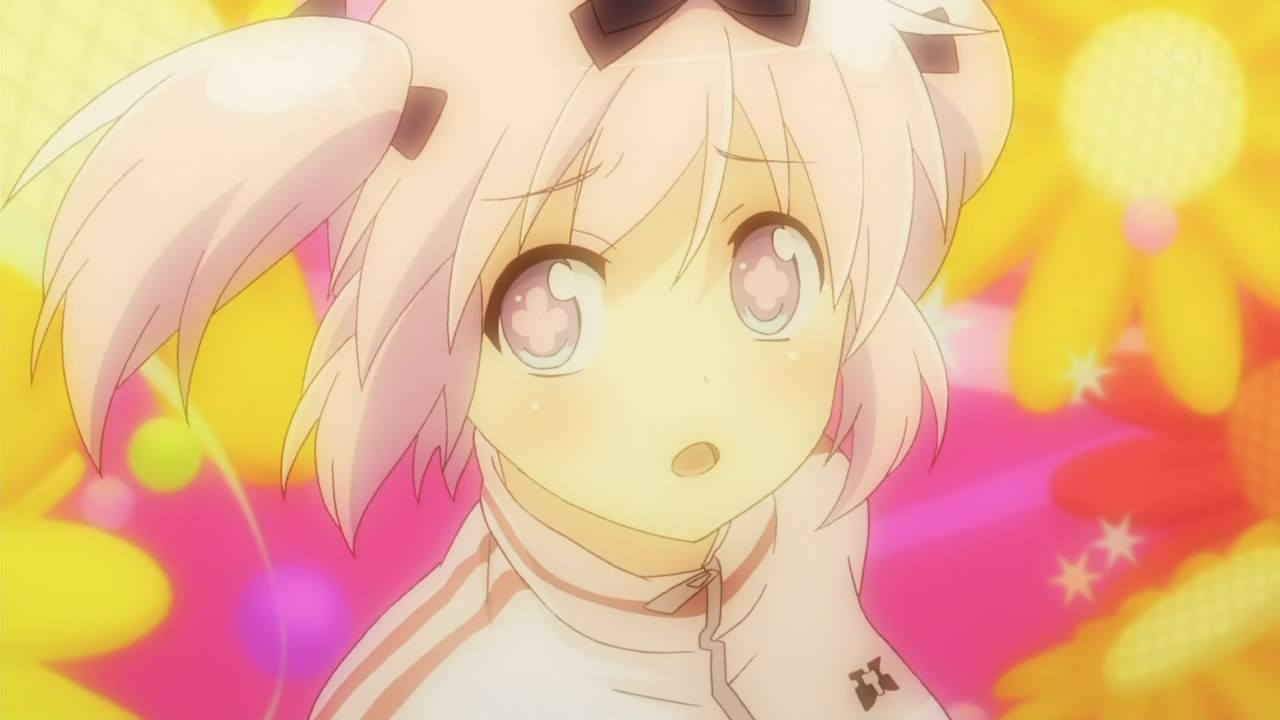 Hibari, another first year student at Hanzo National Academy, seems out of place amongst her peers. She isn’t a particularly gifted fighter; she isn’t physically imposing and is just flat out ditzy. Her main function seems to be upping the overall cute quotient of the group.

All of this betrays the talent she possesses, which is an acute sense of her surroundings. She is able to detect what others completely miss. Her telepathic abilities are also top notch. These skills will catch the attention of Haruka, one of the shinobi on the evil side, who will look to add Hibari to her "collection." 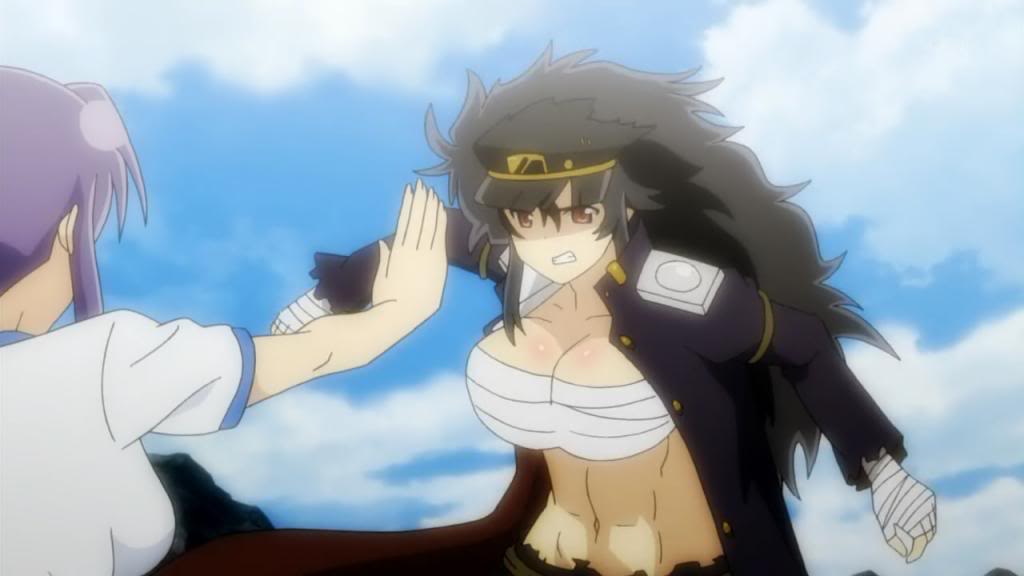 She is an imposing figure at Hanzo National Academy, a living legend walking amongst the students. Even after passing her graduation exams year ago, she remains at the school. There are two reasons for this. First, she stays behind in order to ensure that the next batch of shinobi continue the tradition of excellence that has been built by previous students. Second, she refuses to graduate until she is able to score a victory against here fierce rival, Rin, who attended the academy at the same time as Daidoji. 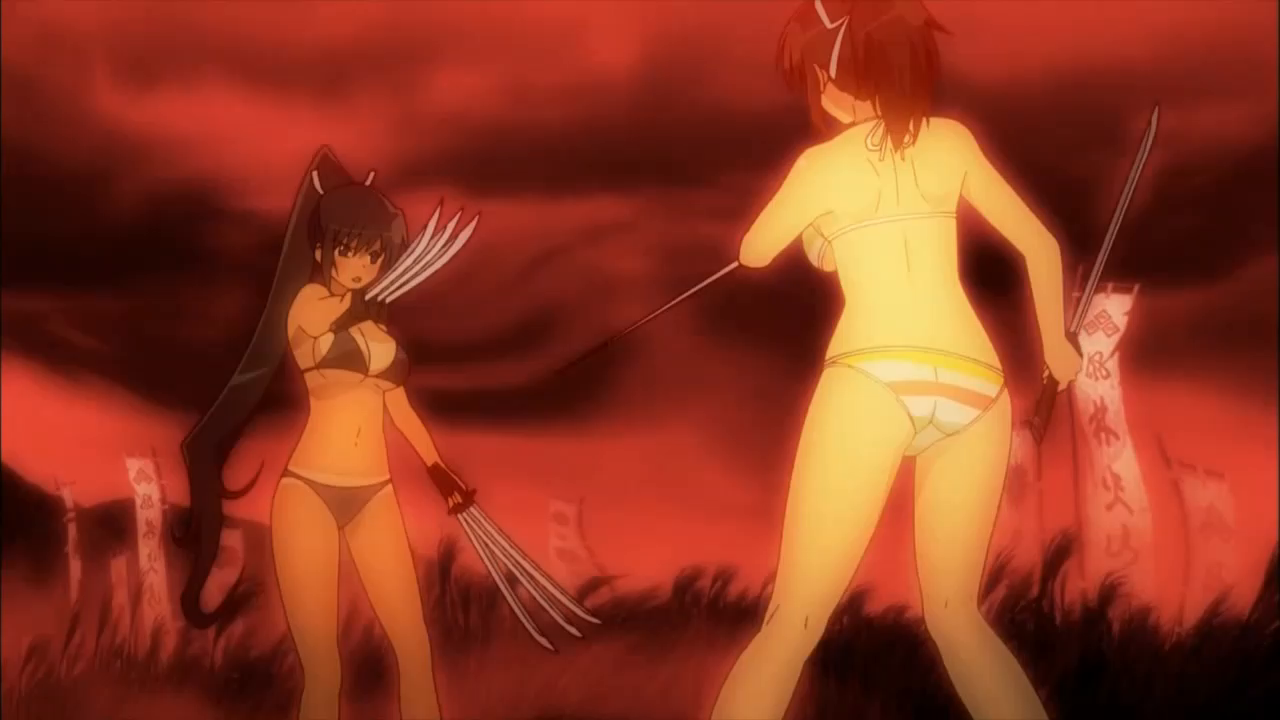 Homura is without a doubt the most skilled fighter amongst the elite shinobi at Hebijo Clandestine Girls' Academy, fighting with six blades at once. She has a cut throat attitude to go alongside her fighting prowess, willing to go so far as to kill off her own family members if the order were given.

She finds herself at Hebijo Academy despite coming from a lineage of good shinobi, after committing a grave transgression earlier in her life. This leaves her with no choice but to choose the path of evil. She is also Asuka's rival. 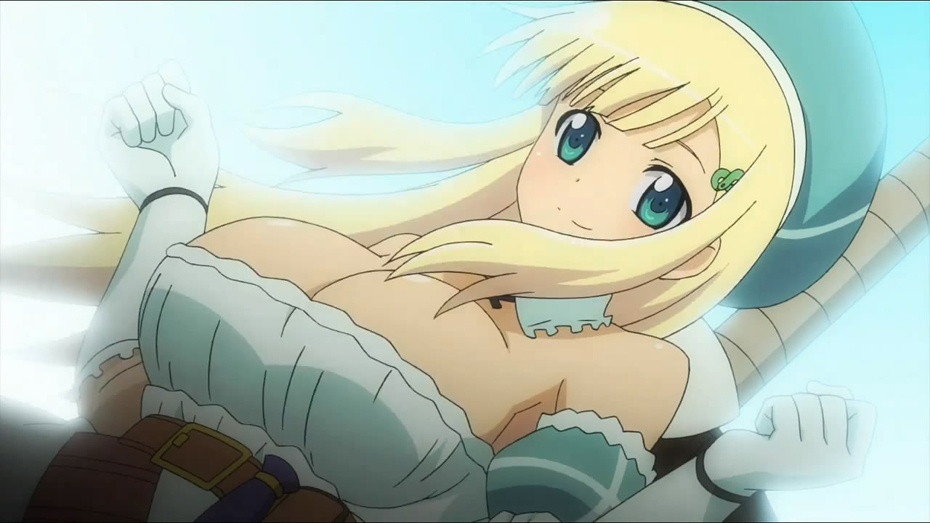 Do you know the current price of bean sprouts? If you don't then Yomi will be sure to fill you in on all of the details. She is interested in sprouts because it's the food of the common people, whose plight is of great concern to her. This is because she grew up in abject poverty and lost her parents due to their lot in life.

She feels that the social structure that fails to help those who are less fortunate needs to be destroyed, and she hopes to gain the power at Hebijo Academy to do the destroying. Naturally, she develops a rivalry with Ikaruga who she sees as the prototypical rich girl. 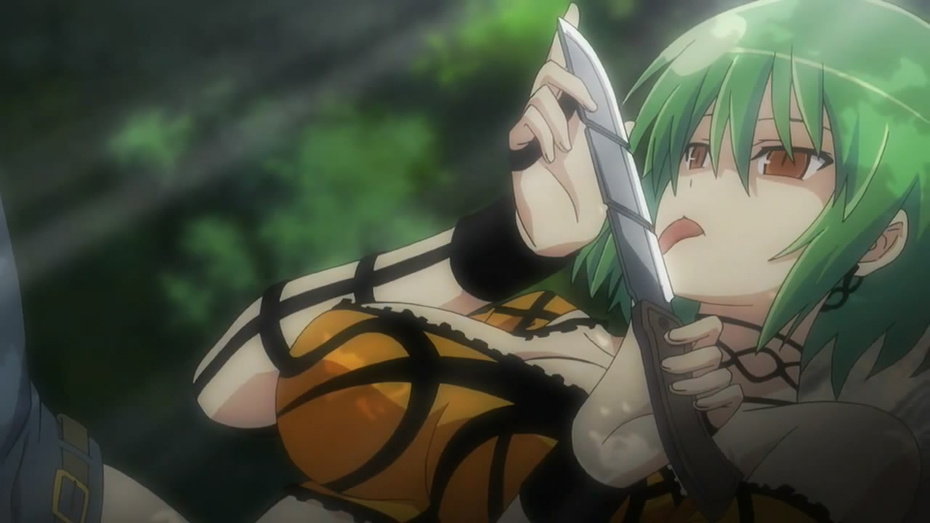 Hikage doesn't show much emotion. It's the only way she knows how to live after being raised on a battlefield. This tough upbringing has honed her skills to ensure her survival, and makes her a perfect fit with her peers at Hebijo Academy. Keeping her emotions under check is tested once she meets Katsuragi, who is able to bring out a little extra from Hikage. 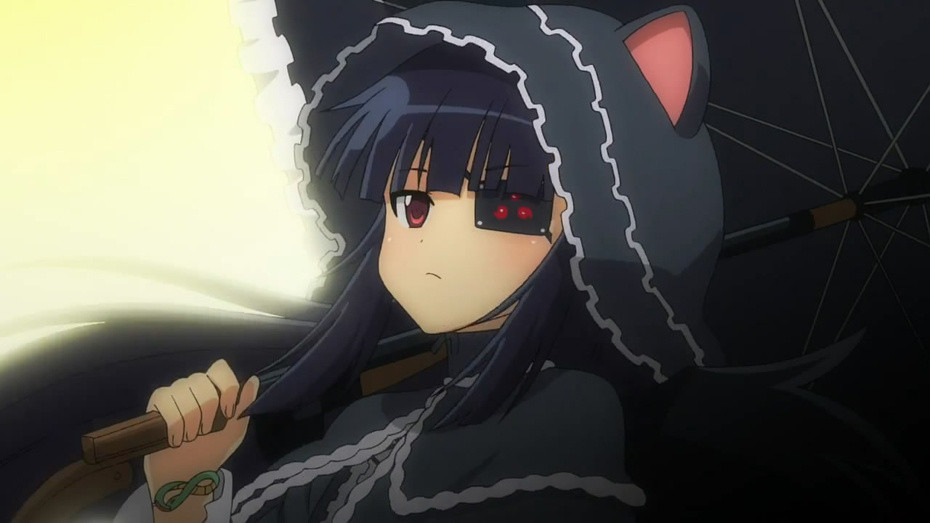 Despite her small stature Mirai doesn't shy away from a fight, and takes an umbrella with a built in gun to her battles. Unfortunately she finds herself on the losing side of things more often than not, with Yagyu being her opponent. Best thing ever? Mirai has a miniature fighter jet that she can ride to safety. 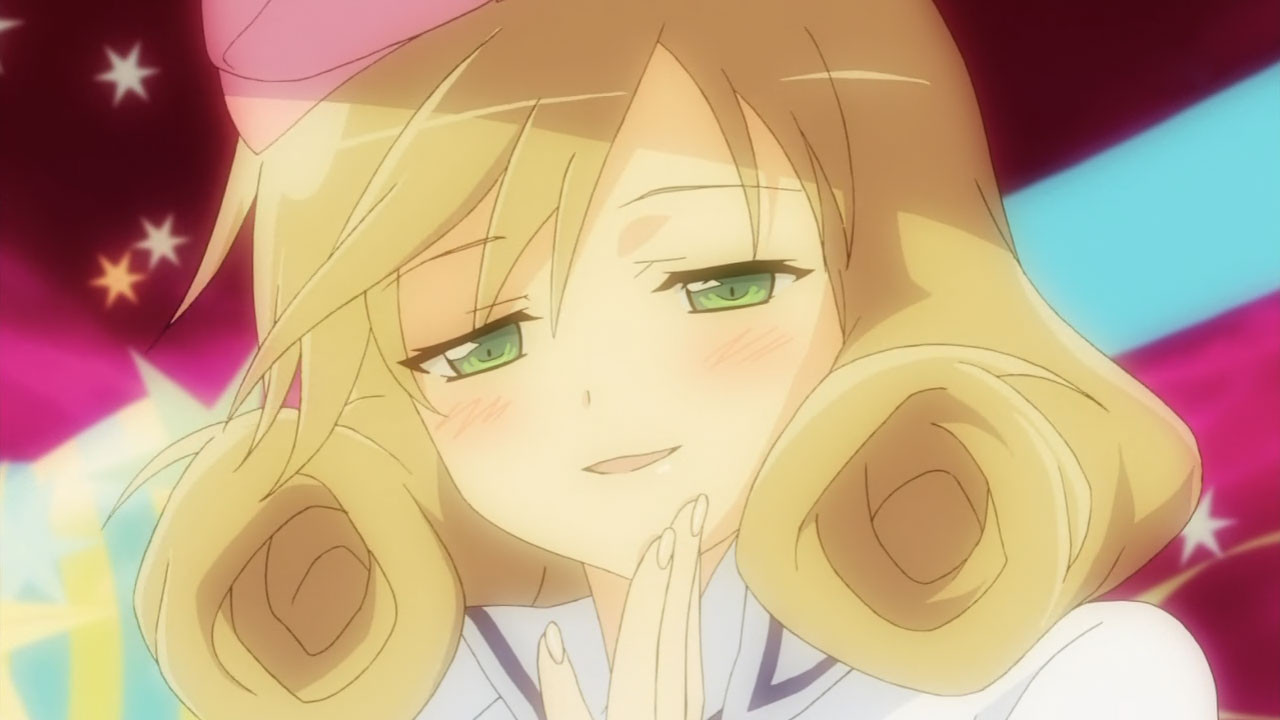 The unquestioned leader of the Hebijo Academy elite students is Haruka. She has mastered the ability of being a puppet master. This allows her to distract or attack opponents with puppets while watching from afar. She also regards others as puppets waiting to be controlled. She develops this complex after being doted on by her mother, being treated as a doll herself. 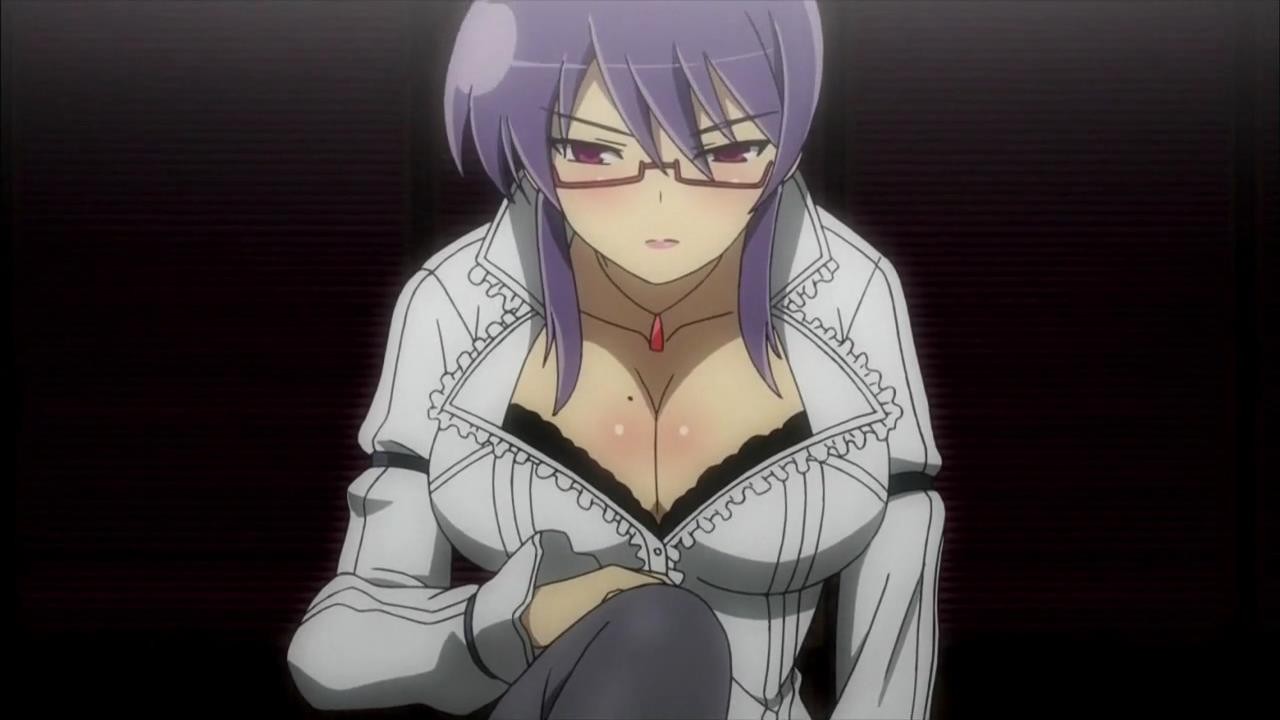 A former Hanzo Academy student and good shinobi, Rin -now referred to as Suzune- has aligned herself with evil and now serves as instructor for the group of elite shinobi at Hebijo Academy. She is an incredibly talented individual who developed a new technique while at Hanzo, something unheard of at the time. She will play a pivotal role in the battle between the students at Hanzo and Hebijo. 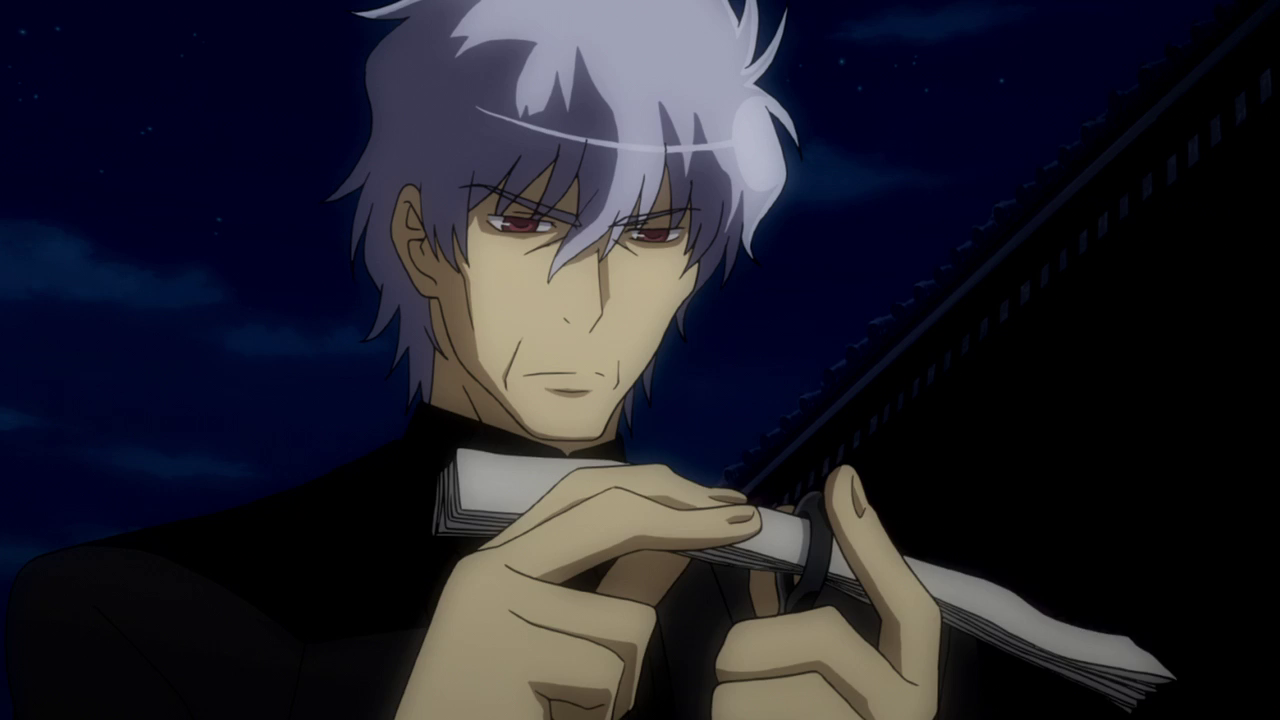 The shinobi from Hanzo Academy are groomed by Kiriya. He trains the girls hard and delivers discipline when necessary. Although he is a skilled instructor, he is still haunted by the fate of Rin, one of his former students. He will have to face this personal demon when Rin re-appears as Suzune.

He has a flair for the dramatic, using smoke bombs to enter and exit rooms. 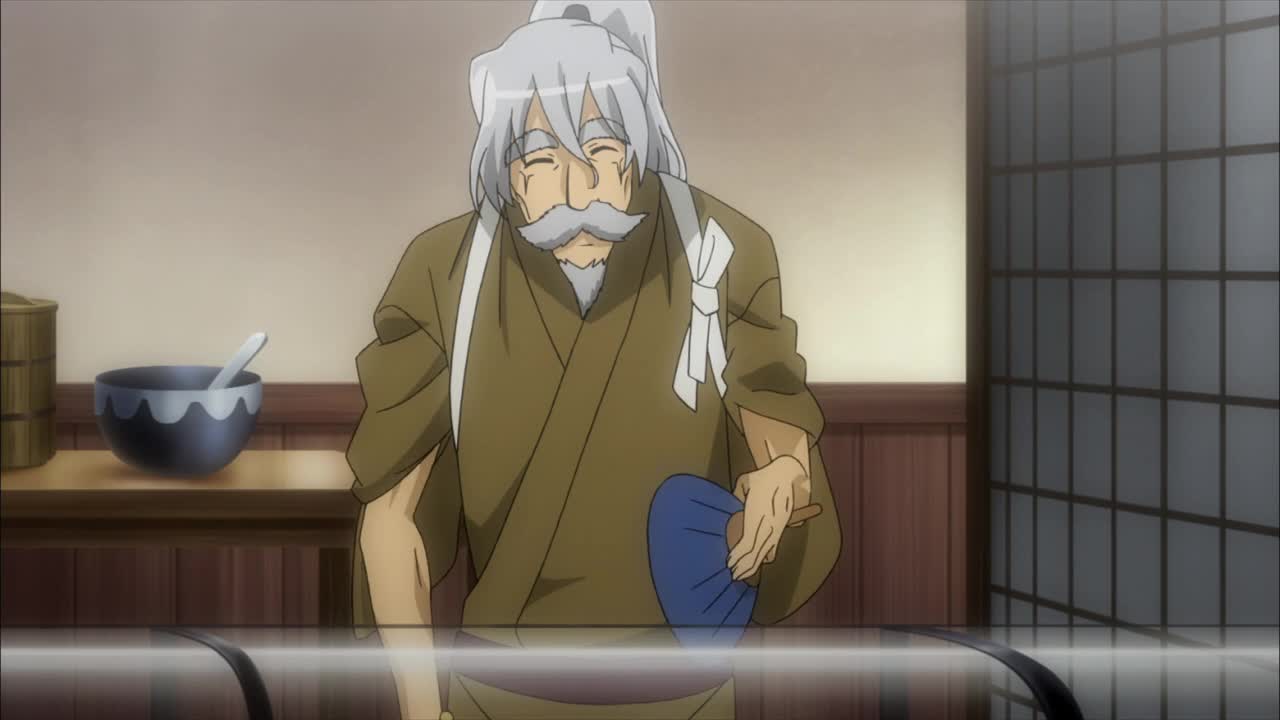 Hanzo is Asuka's grandfather and a renown shinobi. He is responsible for the creation of the secret intelligence officers within the Cabinet's Special Intelligence Bureau Section One. The academy is also named after him.

He drops by from time to time to check in on the girls, always remembering to bring some home made futomaki rolls. He very much enjoys watching the girls eat the rolls, seemingly channeling his inner Katsuragi. 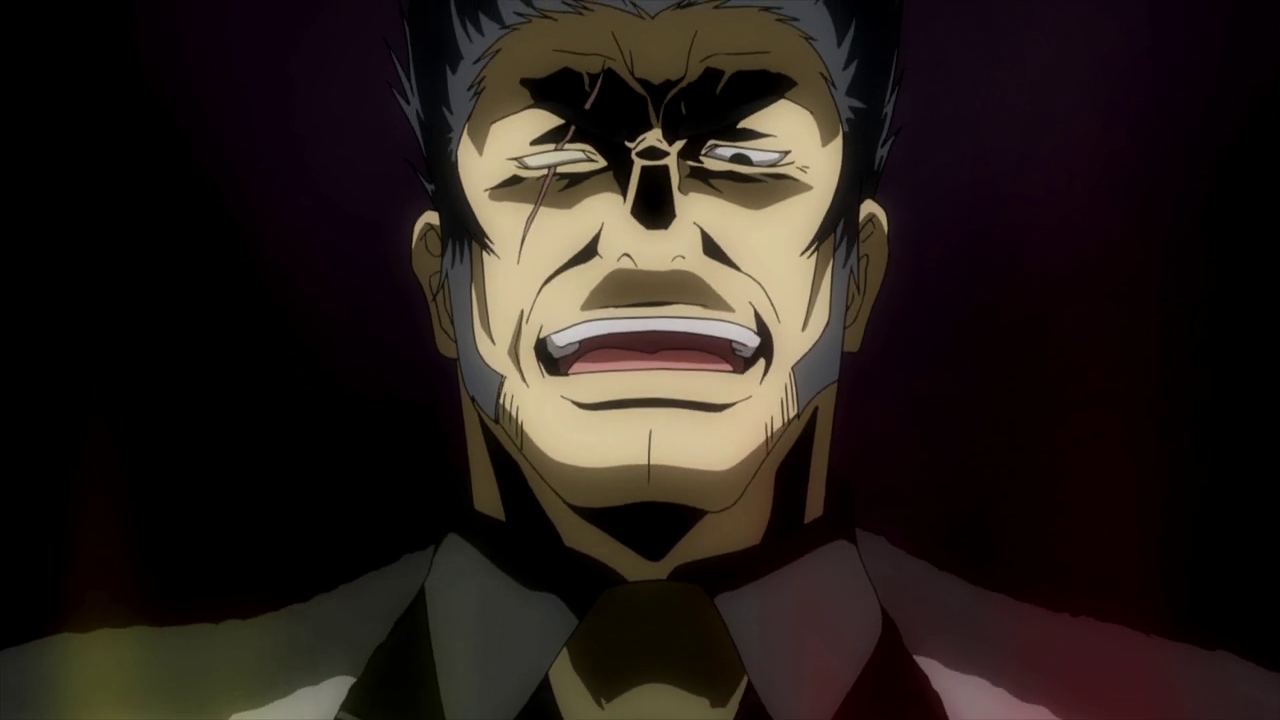 The principal of Hebijo Academy, Dogen is an all around bad guy. He wants to reunite a pair of scrolls that will lend him great power and allow his rise to the top of his organization. He will end up using the elite fighters of Hebijo Academy to reach this goal, even if it means sacrificing the girls' lives to accomplish it.