Explore the Countries of Fullmetal Alchemist

Several countries make up the world of the Fullmetal Alchemist series, each one with some kind of specific role to play in the story. Find out more about these locations and their importance to the story! 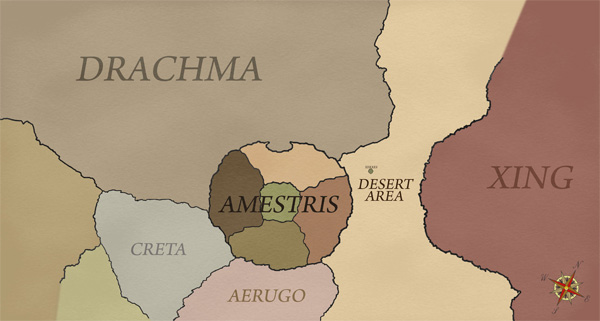 The world of Fullmetal Alchemist is made up of several countries, each with its own unique history and form of government. Read on to explore the places that influenced the story and the world of the series. 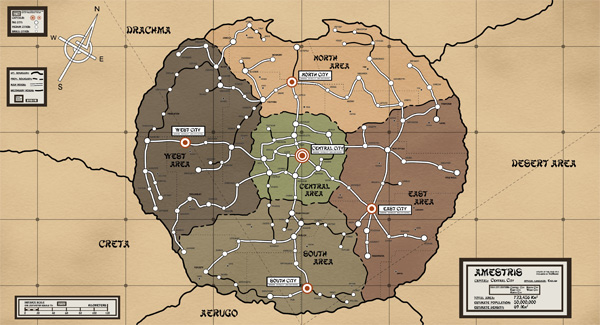 Amestris is composed of several former nations that are diverse in culture and religion. The country has five administrative divisions: South Area, West Area, North Area, East Area, and Central Area. East Area is the most diverse and shelters the Ishvalan people, who are different from the rest of the population that inhabits the country. The Ishvalans are a religious people and most of them renounce alchemy. These differences lead to conflicts with the Central Government, which culminate with the Ishval Civil War.

The geography of Amestris is quite diverse, ranging from desert areas to the east and an icy mountain range in the north. The west and south are covered with plains. There’s also a diverse climate that varies from a typical Mediterranean climate near the southern border to an almost glacial climate in the north near Fort Briggs. Amestris is a mostly land-locked nation with no access to any known sea.

Amestris is a Unitary State, which is governed by one single power and the central government is supreme. It has a Parliamentary Republic type of government, where the executive branch derives legitimacy from the legislature. The parliament is a façade to an authoritarian mandate, and the government is almost completely centralized by the military. Regional officers are directly subordinated to Central Command, which is located in Central City.

The Head of State is the Commander-in-Chief of the military and holds the title of Fuhrer.

Amestris was officially founded around 1550, but the country existed prior to that point without much organization or a government. The “Philosopher of the East” arrived and taught the people alchemy, which brought about a change to the country’s history. With this new knowledge, Amestris began expanding its territory by invading neighboring countries.

Amestris first declared war in July 1558 with Riviere, a nation to its west. Later, it invaded Cameron in 1661 and Wellesley in 1811. When each of these countries was conquered, Amestris took the enemies’ land and integrated the people into its country. With these acquisitions, Amestris has grown into a large circle, except for one piece at the northern border.

In October 1885, Amestris invaded the country of Aerugo, and this served as the starting point for the war that has been raging until the time the series begins. King Bradley was appointed as the Fuhrer of Amestris in 1894, and conflicts have raged at most of its borders since he took power. Most of these conflicts have led to massacres and civil wars.

In 1901, an Ishvalan girl was shot by an Amestrian soldier, and this marked the beginning of the Ishvalan Civil War. The war lasted until 1908, when King Bradley issued Order 3066 and sent the State Alchemists to Ishval to exterminate the Ishvalan people.

Amestris seems to have the highest technology in the region, and appears to have undergone an industrial revolution. There are steam engines, and automobiles are starting to overtake horse-drawn carriages as the prominent mode of transportation. However, the automail that has been created here is an outlier of the standard technology in the world of Fullmetal Alchemist. 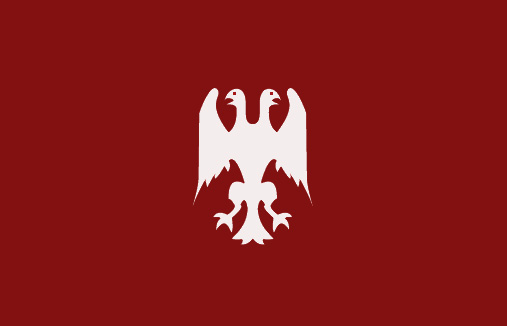 Aerugo is located to the south of Amestris, and it’s generally known more as a trade country and tries to spend little of its time on warfare. It’s a much smaller country than its northern neighbor, but it has been able to retain control over the Aerugo border war. This war started when Amestris seized control of the border town Fostet, along with a strip of Aerugo’s borders. When Aerugo sent heavy amounts of men to fight and reclaim their land, they were slaughtered by the Amestris forces.

Aerugo is a principality governed by Prince Claudio Rico.

Aerugo used to have peaceful dealings with Amestris until King Bradley came to power. With the border war going on, the country has had to spend a large amount of money, troops, and machines to fight Amestris. While Aerugo has greatly damaged the southern part of Amestris, it hasn’t been able to defeat it due to its neighbor’s powerful military might. This fighting has become the first real threat to Aerugo’s massive economy.

Aerugo also involved itself in the Ishval Civil War by providing small arms with effaced serial numbers to Ishvalan soliders. But when Amestris began slaughtering the Ishvalans, the refugees who came to Aerugo to seek sanctuary were refused assistance. Aerugo’s government also disavowed all knowledge of smuggling weapons to the Ishvalans. 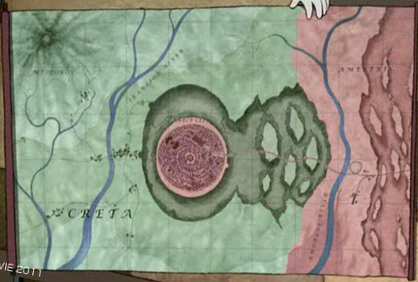 Creta is located to the west of Amestris, and it’s a country that continually engages in border disputes with its eastern neighbor.

Creta is a Federal State, which is a union of several nations. The central government keeps a close watch over these nations’ affairs, yet provides a level of autonomy to local leaders. Unfortunately, this decentralization of power has brought many conflicts and problems to the country over the years.

The tribes that reside in Creta are culturally diverse and are known to be rather unfriendly to each other. The central government has created borders between the tribe’s territories in an attempt to keep physical and influential space between the local governments.

Creta was founded around the year 900 when Cretua, the leader of the most influential tribe in the region, decided to unify the tribes under one government. Cretua implemented a hereditary dynasty of his family.

Drachma is located to the north of Amestris. There have been many conflicts between Drachma and its southern neighbor in the past.

Drachma is a very belligerent state. Sometime in the early 1900’s, both Drachma and Amestris signed a Pact of Non-Aggression, which endured until the end of 1914 in a shaky state and with continual threats of being broken. Drachma formally declared war on Amestris at the end of 1914. However, when Drachman forces tried to attack Fort Briggs, they were easily defeated. 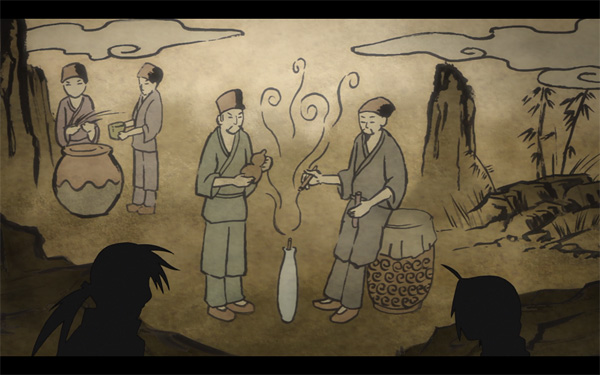 Xing is located to the east of Amestris, but the two countries are separated by the Eastern Desert. Due to this desert, there is a lack of relations between them. It’s very rare for travelers from Xing to undertake the venture across the desert to reach Amestris.

Since Xing it so separated from the western nations, its cultures and customs are quite different. Warriors in Xing have developed their own style of martial arts, which blends acrobatic skills and melee weapon combat. These martial artists are also capable of greatly heightened senses, and they have developed a sixth sense that allows them to detect and appraise the presence and flow of life energy (chi) within human souls.

Alkahestry is a unique custom of Xing, and it’s an alternate type of alchemy. It operates on fashioning elixirs and is used primarily for medicinal purposes. Alkahestry is centered on a concept known as the “Dragon’s Pulse,” which speaks of the earth itself and a constant flow of chi. With the Dragon’s Pulse, Alkahestrists can transmit this chi through the pathway of the human body to cure mild ailments and injuries. Alkahestry was born when “The Philosopher of the West” appeared from Xerxes with his alchemical teachings. The people of Xing combined these teachings with their old metaphysical healing practices.

Xing is ruled by a monarchy where the monarch holds the title of emperor. The country is composed of 50 hereditary clans under the rule of a single emperor. He cements his title by taking the daughter of each clan’s chief to be his concubine and bear him a single heir for each clan. Of course, this creates contention between the clans as all the heirs compete to inherit the throne.

As of 1914, there are 43 heirs (24 princes and 19 princesses) competing to ascend the throne, as the emperor is reported to be in failing health.

It appears that Xing isn’t far behind Amestris when it comes to technological advances. However, to them, automail is just a story within the empire. But they do have their own arsenal of specialized grenades with explosive types that are unknown in Amestris. 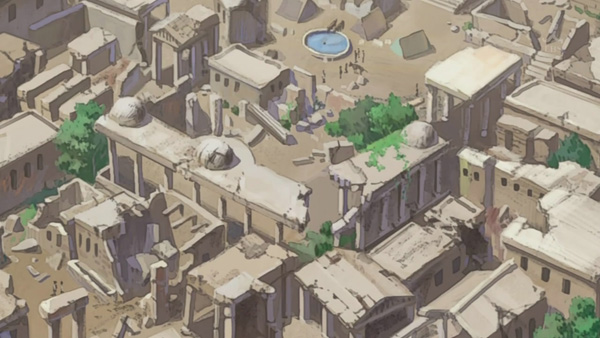 Xerxes is an ancient country that existed in the desert to the east of Amestris 400 years before the start of the series. Its society was highly advanced for its era. This included mastering the construction of stone and brick buildings ranging from homes to palaces in an age before modern building materials were available.

Xerxes was a peaceful and thriving land even though the people had to deal with the harsh conditions of the desert surrounding it. It had a population of over one million people, and most of them were sustained by crops grown in the plantations of the suburbs. The urban areas had developed around domed temples and trade markets.

The people of Xerxes had an intellectual culture that fostered written language, as well as philosophical and alchemical studies. While slavery seemed to be common practice in their country, it was possible for slaves to become free through education.

Xerxes had a centralized monarch, with a king and royal court governing the capital. The king resided in a castle city in the center of the country.

A prominent alchemist in the king’s court created a Homunculus with extensive knowledge of alchemy. With this creation, the aging king saw a chance to gain immortality. The Homunculus became the royal court’s primary consul on alchemy-based immortality, and ultimately tricked the king into constructing an array that encompassed the entire country. When the array was activated, towns were destroyed and the Homunculus was able to steal the lives of Xerxes’ citizens and royalty. The Homunculus split the source of immortality between itself and its caretaker. Just like that, the people and the country of Xerxes were no more.

As you can see, each country in Fullmetal Alchemist is unique and these differing characteristics are integral to the story.