Gatchaman Crowds is an interesting take on an old formula. The Gatchaman Crew this time around is a very interesting bunch. take some time to get to know them.

Gatchaman Crowds is an anime that thrives on characters. The show is full of interesting people that help drive the narrative. While Gatchaman Crowds has a central protagonist, the show excels because of the diverse cast. I’ll do my best to introduce you to the main players of Gatchaman Crowds without any spoilers. There’s a lot of interesting stuff going on in the show, and I don’t want to ruin the fun for anyone. That said, let’s dive in.

The Gatchaman Team (or G-Crew) 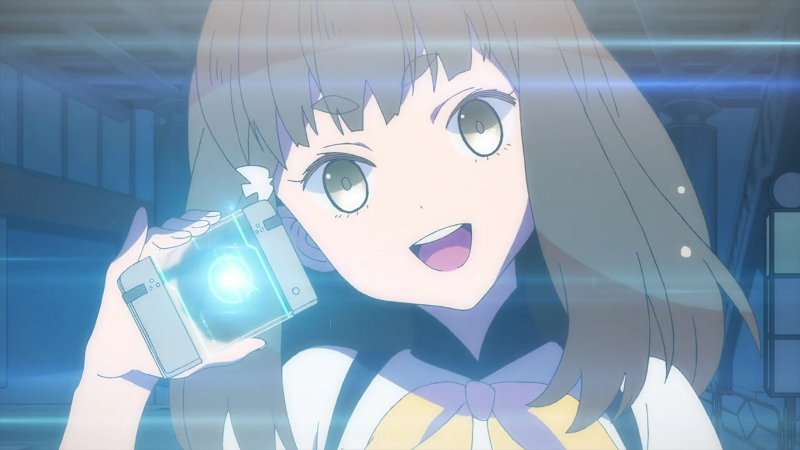 Hajime is the main protagonist of Gatchaman Crowds. She is the focal point of the series, and we’ll use her as a point of reference to explore the world of Gatchaman Crowds. Hajime is a bit of a polarizing character for most viewers, and your reaction to her may mirror your reaction to the show at large. Her views and attitudes help to drive the major themes and questions of the show. Hajime is a 16 year old high school student, and the newest member of the G-Crew. Hajime is a lively girl with an affinity for stationary. She’s not your typical anime lead, especially for a show about super-powered teenagers fighting an alien threat.


Hajime’s defining characteristics are her impulsivity and energy. The phrase that might best describe her is loose cannon. If you’re not familiar, the phrase comes from old naval conflicts when a ship’s cannon might break loose of its moorings. If you can imagine firing a large cannon with no idea what will happen once you do then you’re starting to get a pretty good picture of Hajime. She has a knack for disobeying orders and acting without thinking. This undoubtedly makes her a liability at times, but it’s also one of her greatest strengths.


When Hajime first joins the G-Crew, she is put under the responsibility of Sugane Tachibana. Sugane is a serious and traditional young man (more on him in a bit), and I imagine his response to Hajime will mirror the response of many viewers. In short, he finds her annoying, inconsiderate, and unreliable. Over time, however, even Sugane starts to be won over by Hajime’s strange way of thinking and doing things.
This is at the core of Gatchaman Crowds’ real story and arc. Hajime challenges the other characters, and the viewer, to see and think about things in a different way. To say things shortly, Hajime Ichinose is a strange young woman, and that’s what makes her interesting. Her strangeness is a big part of what drives things forward in the show. She may be part of a clandestine team of superheroes, but she is still unequivocally a teenage girl, and very much true to herself. 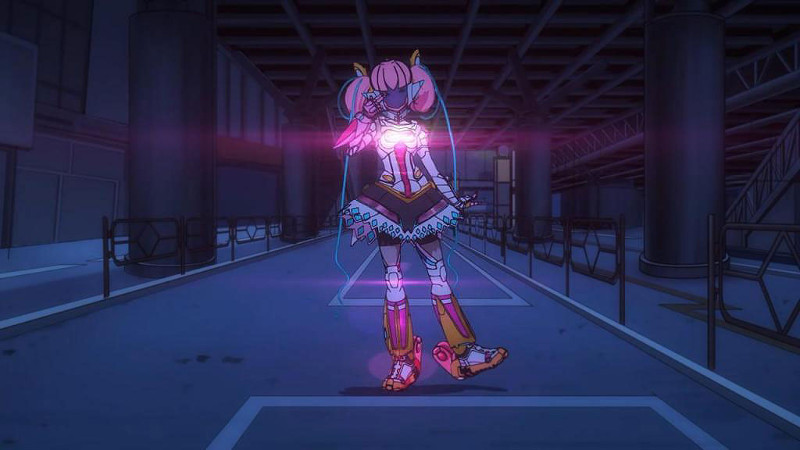 When Hajime transforms, her Gatchaman form looks like a schoolgirl with pink hair in pigtails. The outfit resembles a mix between a traditional school uniform and a maid outfit, but with more color. Many of her attacks and weapons represent her love of stationary, including a large pair of scissors. It’s a bright, flashy form, and it suits Hajime perfectly. 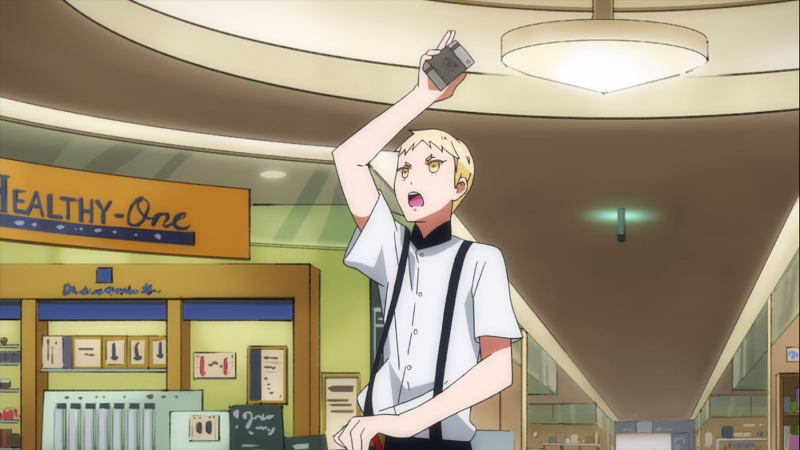 Sugane Tachiban immediately reveals himself as the serious one of the bunch. He attends the same school as Hajime, though he is older than she at 19. Sugane values order and precision. He is calm, respectful, and deliberate. It is no coincidence that Sugane carries a katana; it is clear that his character is influenced by samurai style. It is apparent early on that Sugane takes his job as a Gatchaman very seriously, even if this means that his personal life suffers. He is frequently late to school because of his Gatchaman activities. Sugane is also a capable cook and student (despite his lateness). Sugane has been with the team for 5 years, and considers himself to be an expert in many things.


Sugane is also the member responsible for looking out for Hajime when she joins the crew. As you’ve probably picked up already, this doesn’t go without incident. Sugane’s straight laced manner and Hajime’s impulsivity and strangeness don’t mix. There’s a moment in the second episode when Sugane makes dinner only to have Hajime “fix” it. When she presents her version, it’s covered in blue sauce. Sugane indicates that there’s no way it could taste good. Sugane, however, isn’t too proud to admit that he’s wrong after he tastes it. This interaction says a lot about both of their characters. Sugane would prefer things by the book, but he’s also willing to admit when he’s wrong about something.


Sugane seems content to keep to himself most of the time until he meets with Hajime. She pushes him to broaden his social circle, as well as his way of thinking. In a way, Sugane represents the old way of thinking and tradition. That said, his attitude towards a lot of things begins to shift as the series goes on. 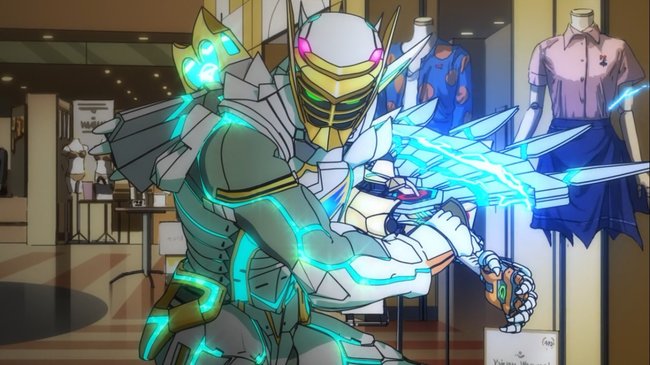 Sugane’s transformation seems to draw from a lot samurai imagery. It is stark white, with a little color. Sagune’s Gatchaman form looks much more like what you’d expect from a superhero. It’s angular and business-like. It’s also extremely agile, able to walk on walls and ceilings.

Joe Hibiki – The Lazy One 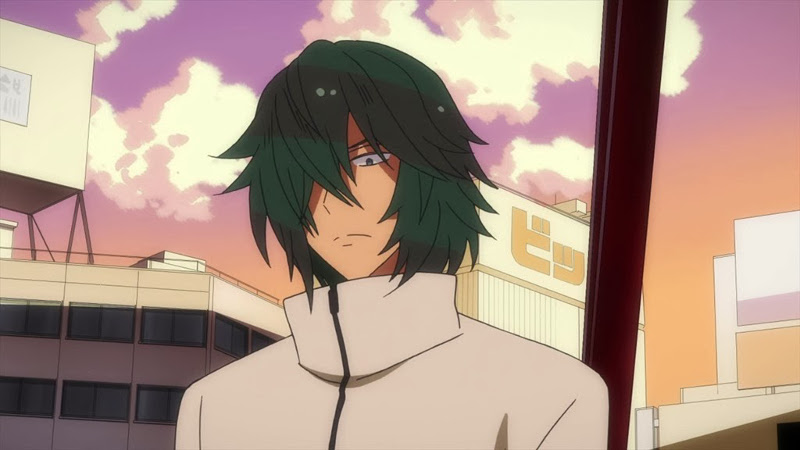 Joe Hibiki is a graduate of Tokyo University and has been a member of the Gatchaman Crew for 10 years. Joe is commonly found lounging around the team’s headquarters with seemingly little interest in participating in much of anything. Joe tends to exclude himself from the teams drama for the most part, but that doesn’t mean he’s not listening.


Joe works for the “Living Safety Department” of town hall. At his job, he can be seen wearing glasses, cleanly dressed, and always has his hair pulled back neatly. After hours, with the teams lounge, Joe can usually be found with unkempt hair, and smoking a cigarette or drinking.
Despite his lazy appearance, Joe is not a slouch in his Gatchaman duties. We learn early on that Joe is responsible for rescuing a younger Sugane from a MESS attack. He is also the one to mentor Sugane when he joins the team. Like many of the characters in Gatchaman Crowds, Joe begins to change a bit once Hajime arrives. 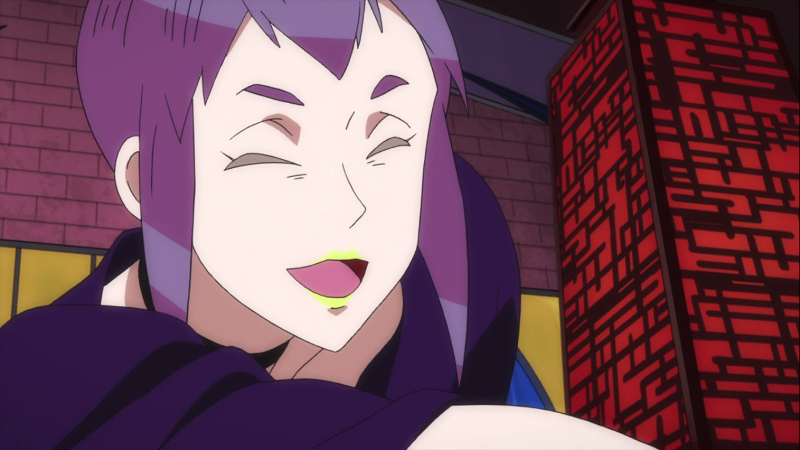 O.D. is only half human, and was raised on another planet. O.D. tends to be the light-hearted member of the group (Hajime notwithstanding). He’s the first to really welcome Hajime to the group, and he’s not judgmental of her personality or her decisions. O.D. is generally seen wearing makeup and heels, and tends to have a number of effeminate qualities. O.D. also seems to play parent to the group, and does his best to care for everyone. O.D.’s light-hearted manner and personality are somewhat at odds with what is a very serious past.


O.D. introduces himself as “a sad Gatchaman who can’t transform.” He is able to assist the Gatchaman crew in many ways, but he is unable to transform himself for combat. It does appear to bother him at times, but he manages to keep up a positive appearance most of the time.

Utsutsu Miya – The Gloomy One 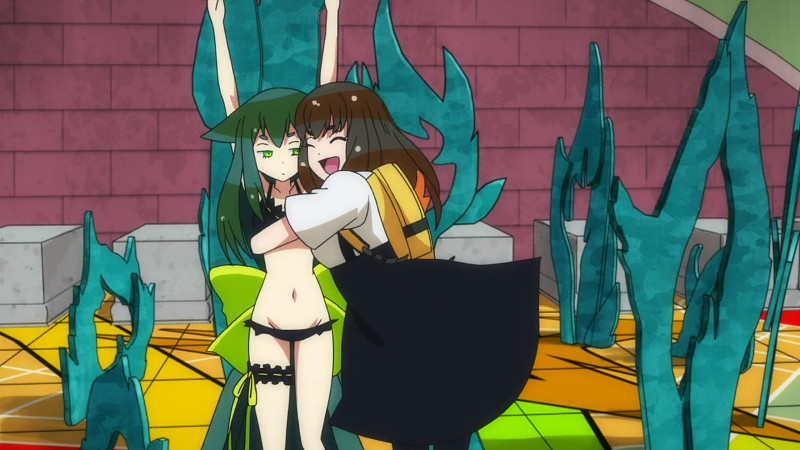 Utsutsu Miya is maybe the quietest of the group. She keeps mostly to herself, and if she speaks at all, it’s usually to say that she feels gloomy. She appears to have a very low opinion of herself, and this shows through in her actions. She tends to be very guarded in her interactions with others. The only exception to this rule is her roommate, O.D. Utsutsu is able to open up to O.D. in a way that she does not with others.
Utsutsu has a great care for plants and tends to the plants in the Gatchaman base. Utsutsu also tends to wear a bikini in the Gatchaman base. It may be that she feels comfortable enough with the other Gatchaman members to allow herself to be more outgoing with them and that her choice of clothing is a representation of this.


Utsutu’s Gatchaman transformation has the appearance of a hooded girl covered in bright colors with a large extendable hand.

Paiman – The One Who is Absolutely Not a Panda 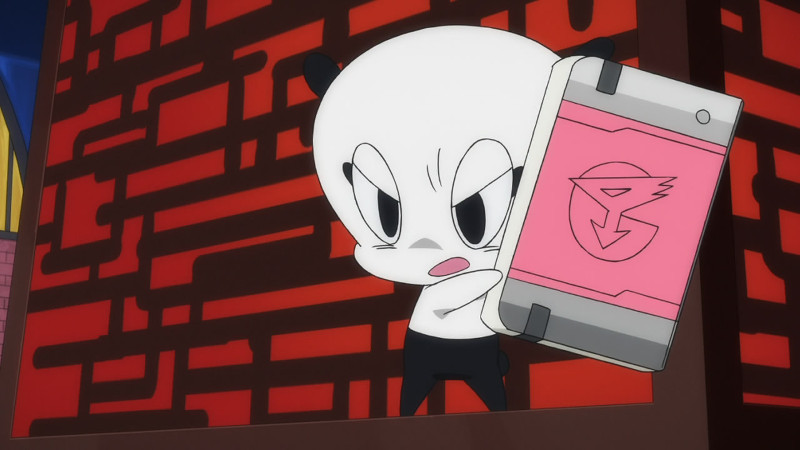 Paiman is the Gatchaman team’s leader. Though he may look like a panda, he is quick to inform Hajime that this is not the case. Paiman is, in fact, an alien, who loudly considers humans to be somewhat beneath him. Paiman is a heavy drinker and tends to complain loudly while he drinks. He has the utmost respect for J.J. and doesn’t generally question what he hears. Paiman does not respond well to Hajime at first, whom he considers disrespectful. 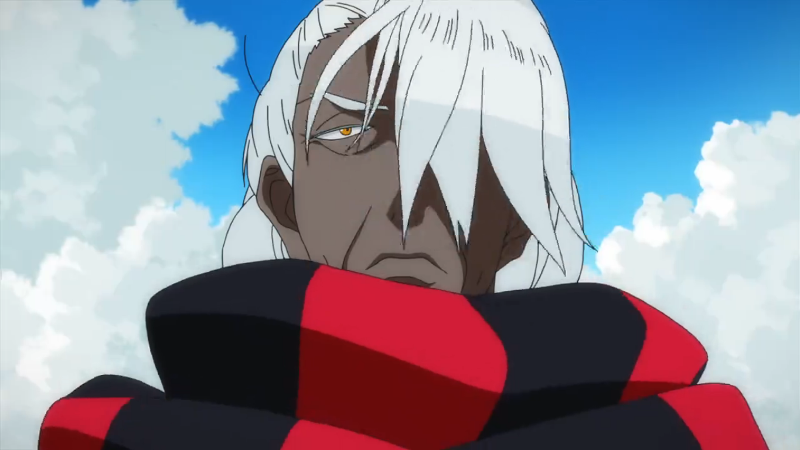 J.J. is the guardian of Earth. Paiman informs Hajime that this means he is basically a god. He chooses the members of the Gatchaman Crew and alerts them to upcoming threats. He tends to communicate vaguely with the team based on his forecasts of the future. 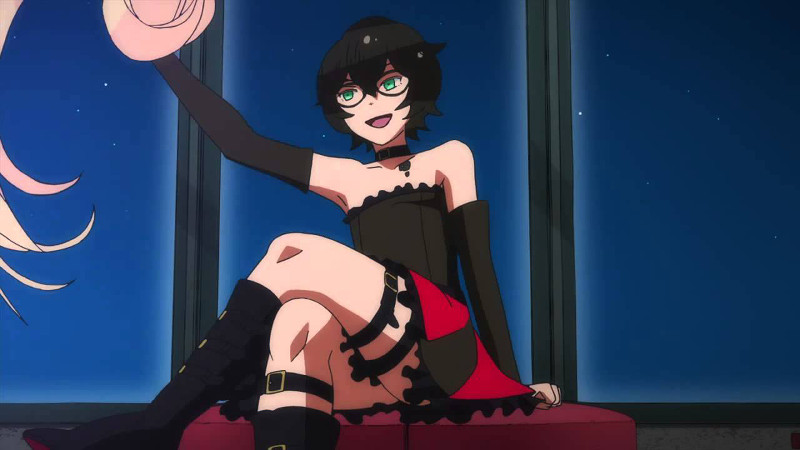 Rui Ninomiya is a young man who lives by himself in a penthouse apartment. More importantly, he is the creator of GALAX. He believes that his app can “upgrade the world.” He believes that society, as it stands, is broken, and believes he can get people to band together to make the world a better place. In public, Rui is usually seen dressed as a blonde girl. 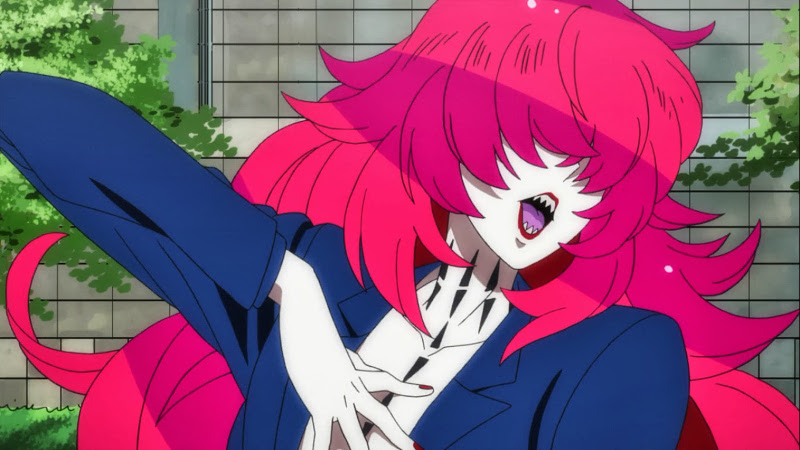 Berg Katze is a mysterious and androgynous alien who seems to desire causing chaos and destruction. He is able to assume the identity of anyone he kisses, though he seems to have a number of other powers as well. I’ll avoid saying too much here about him to keep spoilers out of the mix, but he creates interesting conflict for the Gatchaman crew.


So those are the important characters of Gatchaman Crowds (or most of them, at least). Hopefully they've peaked your interest in the show. It's an interesting ride full of interesting people.

Sword Master is the Ultimate Father Figure of Afro Samurai

Afro Samurai gives us not only breathtaking action sequences and eye-catching animation, but also one of the coolest warriors in anime and the ultimate father figure. Meet Afro Samurai and Sword Master. Let's get to know these two unique characters a bit better and explore their powerful bond.