The first episode recap for Prison School, a story about 5 school boys who are accepted into a newly co-ed boarding school. The catch? There are 200 girls to 1 boy, and the boys must suffer the consequences of their bad behavior. 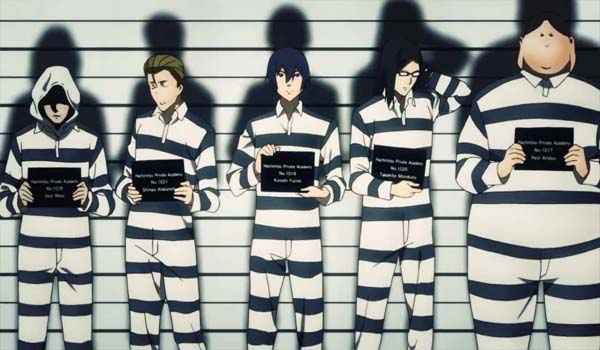 The first part of the anime follows our five main characters. Hachimitsu Academy used to be an all-girls school, however when the school came under new management, it became co-ed. This school is known for having females outnumbering the male students with a ratio of 1 male for every 200 female students. It sounds like heaven for the only five boys in this school, but they are actually very isolated. The girls do not approach or talk to them. They’re completely frustrated and they can’t do anything about it. One of them decided to give it another push though. Kiyoshi Fujino decided he would approach a girl and get acquainted with her. By a stroke of luck, the cutest girl in his class happens to start talking to him. Noticing he has a sumo wrestler eraser, the two of them bond over wrestling. They had a conversation that lasts for hours, and it feels like Kiyoshi’s luck with girls is about to change. He can’t say the same for his fellow companions who are reaching a breaking point. 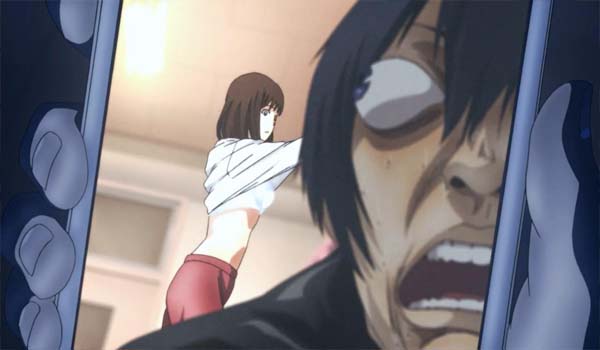 Completely frustrated, they decide to peek into the girl’s bathroom. They plan to witness bare naked girls bathing and they’re so excited about it that they even don a latex body suit for this venture. Kiyoshi is roped into this plan until he realizes that the others intend to use his cell phone to peek at the girls. Using a two way video system, they will dangle one cell phone over the bathroom window to peek at the girls. Of course, the phone accidentally falls, and a panicked Kiyoshi immediately goes into the room to retrieve it. The plan then slowly falls apart when Kiyoshi somehow ends up bathing with the girl he has just been acquainted with. Chiyo Kurihara mistakes Kiyoshi for her friend because she isn't wearing her contacts, and drags Kiyoshi from the changing room to inside the bathroom. The rest of the male students witness this lucky moment via the cell phone. In the heat of the moment, they decide to strip and enter the bathroom as well. This doesn't eventuate as a flock of crows suddenly crowds above them, signaling the underground student council. This is when the story actually begins. 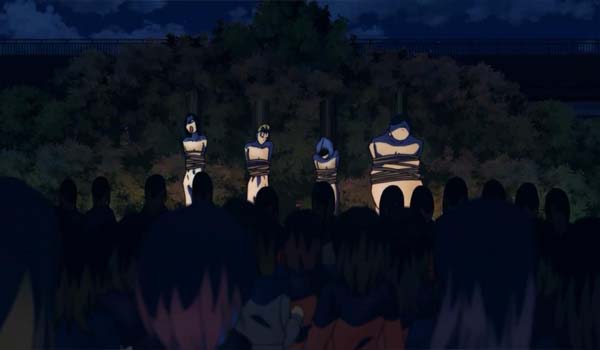 The underground student council captures the four naked perverts on the roof and proceeds to tie them up in the school ground for all to see. Kiyoshi manages to escape, until he he happens to meet the student council president. They were all apprehended and handed a sentence for their evil deeds. They will spend a month in prison school. They will then endure the various acts of torture that the president, vice president and secretary will dish out. For the first few days, dressed in prison uniforms, they were subjected to physical beatings at the hand of the vice president. Ordered to do manual labor, they were treated with whips and kicks by the vice president for being out of line. To the uninitiated, you would think this show would follow a “Deadman Wonderland” logic where the prisoners are treated to gory punishments. This would change when the vice-president, in her high heels and skimpy uniform, would treat the male students like dirt. Kiyoshi would actually stand up to this unfair punishment but, surprisingly, the male students actually enjoys it. 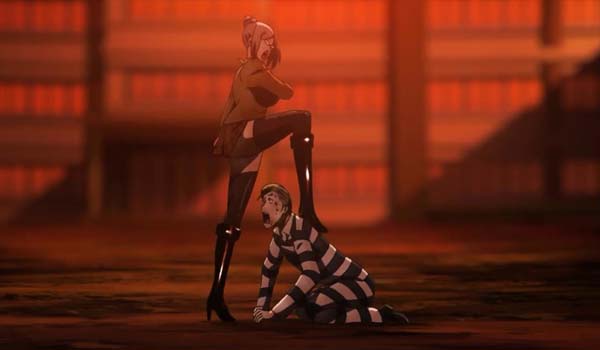 Male students that up until now had no female interaction in this school are completely in bliss being tortured by the vice-president. Learning about this though, the underground student council decides to have the secretary continue the punishment. The secretary is a soft spoken girl who is actually a trained fighter. She turns sadistic at the slight provocation. While being asked to gather four leaf clovers, Kiyoshi strays from the group to have a heart to heart with Chiyo. For some reason, she is not convinced that Kiyoshi would peek at the girl’s bathroom. The poor guy actually wants to confess to it and apologize, however the turn of events pressures him into agreeing with Chiyo. With her feelings at ease, Kiyoshi feels his luck changing. Unfortunately, it doesn’t last. The episode ends with Kiyoshi atop a tree and the secretary relieving herself underneath it, blissfully unaware that Kiyoshi is above her. A nervous Kiyoshi then accidentally falls right next to her. This spells trouble for poor Kiyoshi, but that is saved for the next episode. 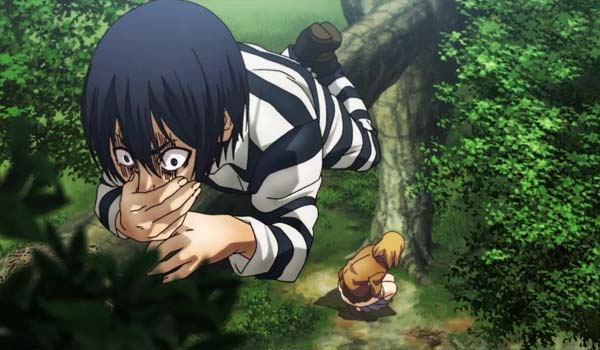 This show is loaded with eccentric characters. The standout for now would have to be “Joe” Nezu who wears a hood and coughs up blood at random times. He suffers from cancer sores but his over-the-top coughing somehow makes him more memorable than the rest of the male characters. This is the first episode though, so there will be opportunities for the rest of the boys to display their weird personalities. 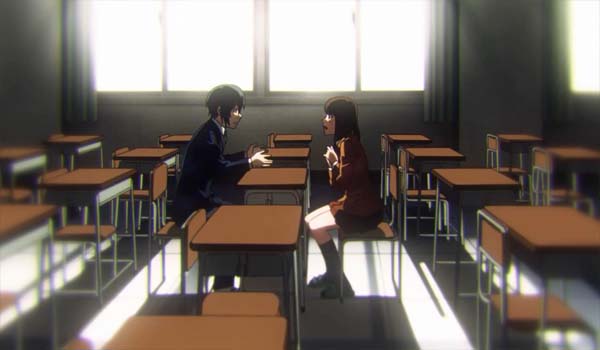 Kiyoshi is proving to be the straight man. Being the lead, he also shares the audience’s sensibilities so it’s interesting how he responds to the punishments in the show. He still acts like a juvenile pervert though when he decided to take a bath in the girl’s bathroom when Chiyo mistook him for her friend. Given the opportunity, Kiyoshi would still cave to his needs so it’s interesting how he’ll hold out for the rest of the series. 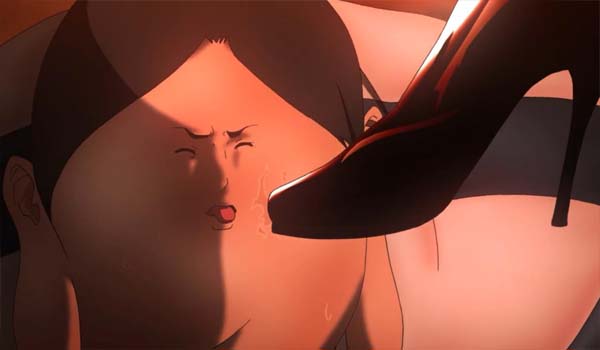 The twisted punishment scenes on the second part would be the crux of whether you’ll like the show or not. It captures the stupidity of the characters, the dark humor of the show and the setup for more beatings to come. The one that stands out would be the vice president forcing Reiji Andou, the fat guy, to lick her shoes. She also spat on him for good measure. 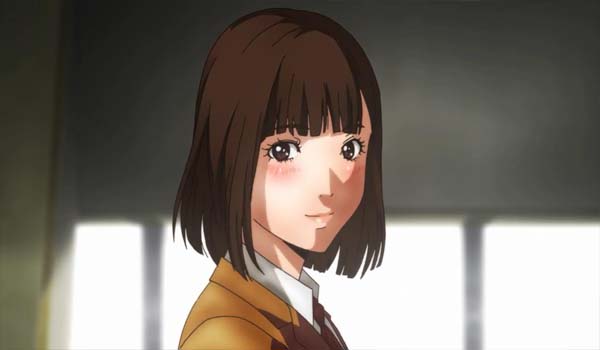 Chiyo is suspicious. She’ll either be a secret member of the underground student council or she’ll be related to one of them.

The anime stresses that escaping the prison would add another month to the male student’s sentence and then three more for their second attempt. Expulsion is enforced for their third strike so it means that the characters would eventually attempt an escape.

The second episode would likely contain more exposition dump and hopefully, an actual narrative to be established.