Let's take a closer look at the latest series in this long-running franchise! Just about everything has improved in this season of To LOVE-Ru: the harem is bigger, the plot is deeper, and the animation is much more detailed. Now if only I could find the uncensored version...

To LOVE-Ru takes its name from Japanese wordplay: the words "trouble" and "love" are rendered in Japanese as "toraburu" and "rabu", giving us a pun on "love trouble." This is a bit like calling Death Note "Writing Murder," or Dragon Ball Z "Screaming and Punching." But while To LOVE-Ru is known for its wacky comedy, enormous harem and massive amounts of nudity, the current series brings much more to the table. In the vein of the previous season, To LOVE-Ru Darkness 2nd keeps the peppy, perverted soul of the franchise intact while offering much more character growth, and at times a surprising degree of maturity. Turns out you really can have your cake and accidentally grope it! 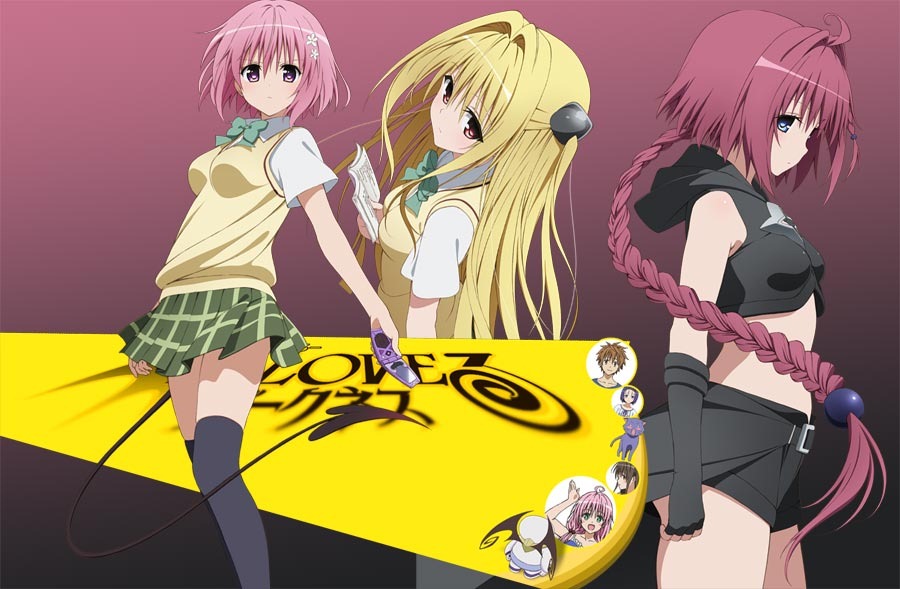 The manga began running in Shonen Jump in April of 2006, written by Saki Hasemi with Kentaro Yabuki as illustrator. Thorny legal issues surrounding Yabuki's divorce forced the manga's cancellation in 2009, but not before the production of a 26-episode anime series and 6 OVA episodes. Along with another anime series, Motto To LOVE-Ru, the manga would return in 2010 under the name To LOVE-Ru Darkness, which received an ongoing OVA and two seasons of its own. It's also spawned two visual novels and an RPG, with a fourth game bound for the PS Vita in November. 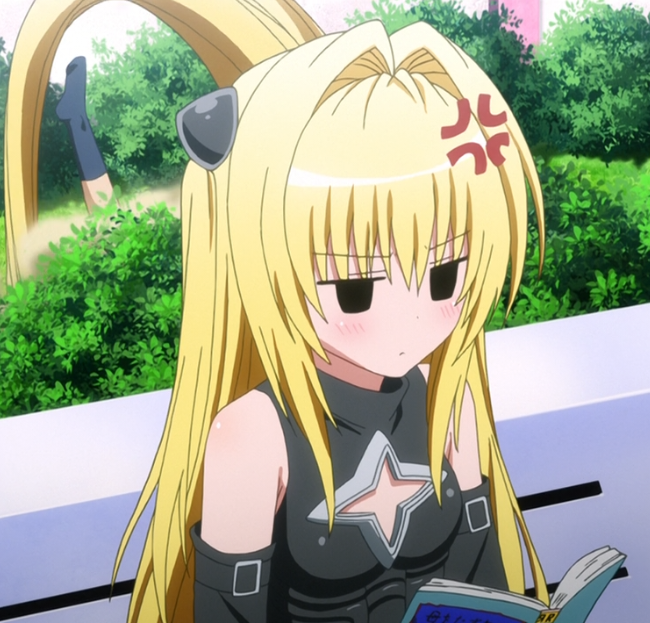 Darkness 2nd retains the franchise's tried-and-true formula: hapless high school student Rito Yuuki has accidentally become engaged to Lala Satalin Deviluke, the princess of an empire that rules the entire galaxy. While Rito likes Lala, he has also been in love with his classmate Haruna for as long as they've known each other. As he struggles with his feelings, several other girls in his life vie for his attention—including Lala's younger sister Momo, who is bent on drawing every girl Rito meets into a harem of his very own. The future king of the galaxy can have as many concubines as he pleases, after all!

As is generally the case with ecchi, To LOVE-Ru isn't for everyone. It follows several long-standing and oft-ridiculed tropes in romantic comedy anime, chief among them a protagonist who is as lusted after by women as he is unable to reciprocate their feelings. The series is also infamous for the insane amount of fanservice; several characters, Rito most of all, clumsily stumble into awkward sexual situations multiple times per episode. If anyone is attacked by an evil alien or one of Lala's faulty inventions, you can bet their clothes are getting ripped off and/or they're pushed into compromising positions with each other. The show has been a frequent target of censorship, including Japan's strict Bill 156; hilariously, it's only gotten more explicit over the years.

So if you're not into "glorious anime oppai" (boobs), Darkness 2nd won't change your mind. But fans will be delighted by its evolution. The animation is notably improved from the original Darkness, particularly in the more diverse shading, better background detail and faster action sequences. Indeed, the show has more of everything: more goofy perverted moments (accidental and deliberate), more charming characters in Rito's harem, and more plot. Previous series focused mainly on the Rito/Lala/Haruna love triangle, and the general episode structure fell into two categories: an alien assassin or suitor would come to break the main characters up, or one of Lala's many inventions would malfunction somehow and cause trouble. Very "monster-of-the-week," in short.

Like its predecessor, Darkness 2nd switches it up by focusing on newer characters: Lala's twin sisters Momo and Nana, and transforming bioweapons Yami and Mea. While Nana wishes to keep Rito's perverted tendencies in check, Momo is madly in love with him and openly plays matchmaker with him and every other girl he meets; at last count, his potential harem has grown to at least 15 girls, including two of his teachers and his own sister. At the same time, Yami wrestles with her new friends and her violent past. Her sister Mea, still under the influence of her master Nemesis, is also caught between identities—a high school student and a deadly weapon—and attempts to guide Yami back to her former life as the assassin Golden Darkness.

There's a lot of conflicting agendas and personalities to this show, and it's noticeable when someone hasn't been in the spotlight for a while—particularly Haruna and Lala, formerly the sole focus of the action. But the plot of Darkness 2nd is much more important from episode to episode, and often tied in directly with otherwise pointless fanservice. Not unlike Kill la Kill, this show's nudity is often central to the story and the characters' decisions.

And what a story it is! True to the title, Darkness 2nd has many more serious moments of character growth. Mea is outwardly violent and sadistic, but at certain points reveals a lonely and heartbroken side. Once unable to even talk to girls, Rito now has to literally fight them off from time to time. But he also has a lot to work through—primarily his evolving attraction to Lala and Haruna—as well as reconciling his Earth culture with a future king's privileges, such as polygamy. Intimate moments of sadness and confusion give otherwise clichéd actions valuable context. In other words, there's more to the characters now than crazy sexual misunderstandings and unrequited love: ambition, frustration and sometimes heartbreak.

If you like romance with a side of ecchi—or ecchi with a side of romance—the following anime might be for you! These shows mix varying degrees of plot with all kinds of comedy, from lighthearted to lewd. You'll be up late at night...um, deciding which character is best girl. Yeah, that's it. 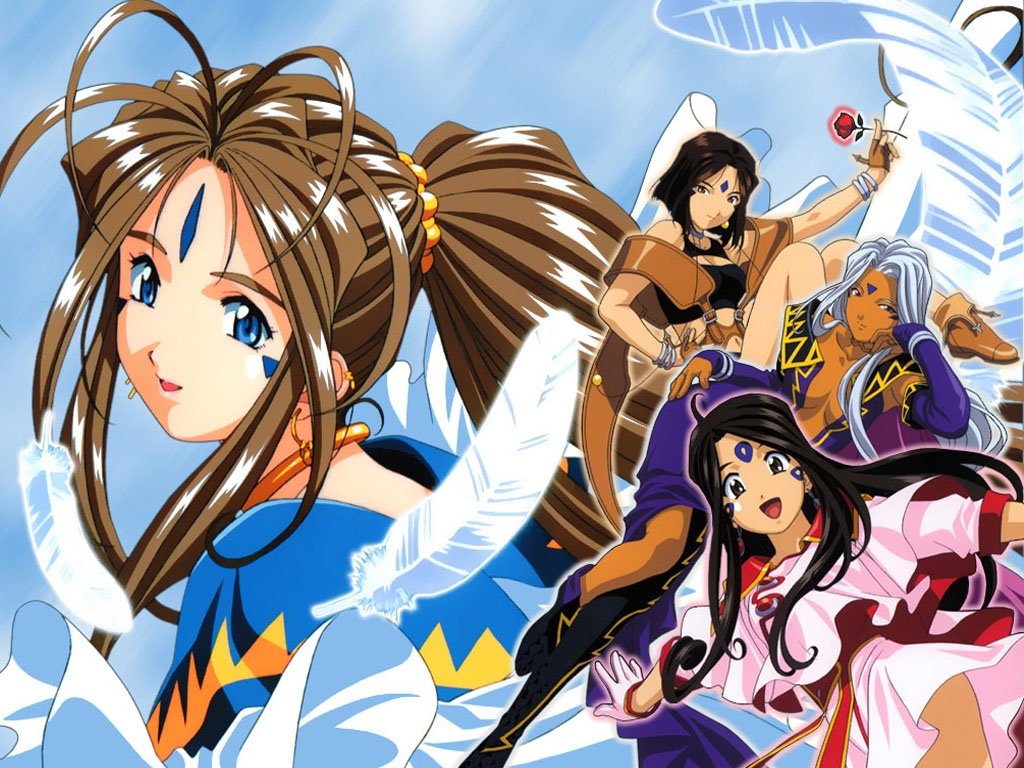 Okay, so there's almost no fanservice in this series, but that's not what it's about. The show (Ah! in some releases and Oh! in others) is an adorable, relatively innocent story of college student Keiichi Morisato and his girlfriend Belldandy, who happens to be a goddess. Similar to To LOVE-Ru, Belldandy's extraterrestrial origin is a secret that causes as many problems as it solves. Oh, and stop me if you've heard this one: her sisters move in with the happy couple, and while one supports their relationship the other opposes it. This series pioneered many of the tropes in supernatural romance anime, as well as creating a complex, intriguing system of magic and divinity, and the relationship between Keiichi and Belldandy is one of the sweetest you'll ever see.

Skeptical? Well, it bears mentioning that this is one of the longest-running series out there; last year, the manga finally ended its run in Afternoon magazine after 26 years. 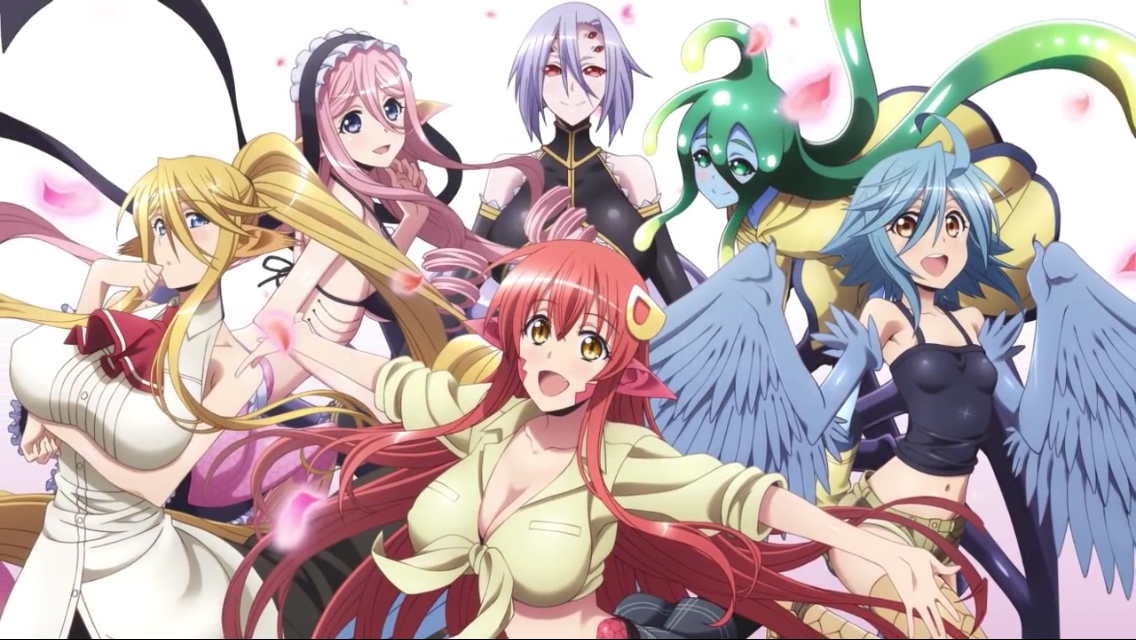 This one rivals To LOVE-Ru for ecchi content, and that's no easy task. After a bill is railroaded through the Japanese Diet fully integrating magical creatures such as vampires and dragons with society, bachelor Kimihito Kurusu finds himself playing host to a houseful of monster girls. Thanks to a lazy, overburdened social worker, Kimihito must look after six such creatures, each of whom are madly in love with him. Hilarity and accidental boob-smothering ensue as he struggles to house an absentminded harpy and a jealous lamia, among others. While first and foremost a screwball comedy, this show is deeper than it has any right to be, frequently delving into the challenges of human/demihuman relations and providing extensive insight into the biology of once-mythical beings.

Fun fact: at this year's Comiket dōjinshi fair, the manga's publisher offered 7-meter body pillows modeled after the lamia character for 100,000 yen, or around $805. They sold out in an hour.

Here's a show you'll want to send the kids to bed for. An all-girl high school admits five male students as an experiment; after they are caught peeping on the girls' showers, they are imprisoned and sentenced to hard labor by the mysterious Underground Student Council. To LOVE-Ru may be random and silly at times, but it's got nothing on Prison School. One of the boys, a Romance of the Three Kingdoms otaku, speaks exclusively in medieval Japanese, and the student council president has power over crows for no adequately explained reason. It's easier to count the scenes that don't have some sort of nudity or sexual humiliation, often with the boys on the receiving end. One of them even gets off on it. Yet despite the juvenile, vulgar humor, Prison School tells an oddly compelling story of five morons who overcome perversion and suspicion and forge stronger friendships for it.

Oh, and the student council vice president's breasts are half the size of her torso. You know, if you're into that sort of thing.

To LOVE-Ru has come a long way in almost 10 years. What started out as a sugary-sweet ecchi comedy has matured into a multifaceted tale of redemption and culture clash, without losing any of the fanservice that defines it. Where the original series occasionally glanced at an overall plot before wrapping it up in the last three episodes, To LOVE-Ru Darkness 2nd explores trauma, recovery and commitment, all while dangling the specter of Golden Darkness's return over our heads. As the season draws to a close, our heroes are likely to face their greatest challenge from within. Their second greatest challenge, of course, will be keeping their clothes on.

Everyday Life with Monster Girls (Monsutā Musume no Iru Nichijō) has a colorful cast of characters, human and otherwise. Who are they? What are they? Which ones might accidentally crush you? Meet Kimihito Kurusu and his lovestruck housemates as they build their lives together!