Shirobako: The Movie - A Conversation

Everything you want to know following the movie's North American theatrical debut on August 10. 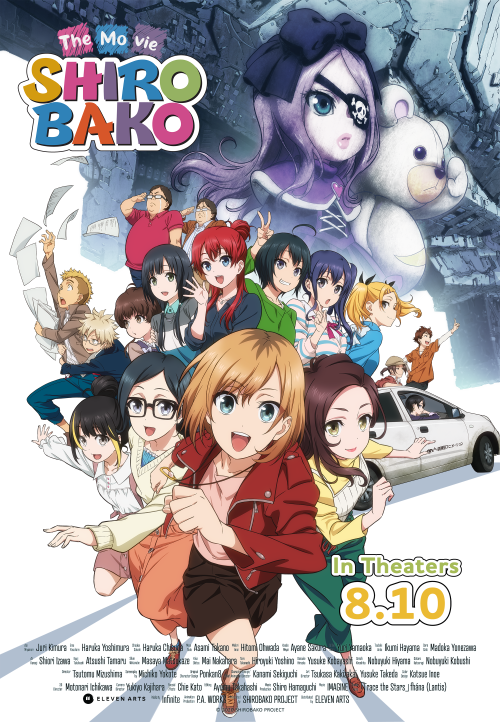 At a time when most anime are adaptations or advertisements for other media, P.A. Works is a studio which continues to bring original series to anime fans time and time again. Somehow this makes it fitting that Shirobako, a story about five young women entering the animation industry, is the studio's highest-rated TV series on MyAnimeList.

Said to be "a love letter to the anime industry," the two cours anime was broadcast between October 2014 to March 2015. The sequel movie of the same name takes place four years after the end of the original TV series, and premiered in theatres in Japan on February 29, 2020. After more than a year of waiting, it is now available to fans in the United States and Canada, premiering in theatres on August 10.

As big fans of the original TV anime series, anime-prime (a fellow moderator) and myself would like to share our genuine take on the movie with you. Hopefully this conversation will get you prepared to check out the movie for yourself—if, for some reason, you needed more encouragement for that. 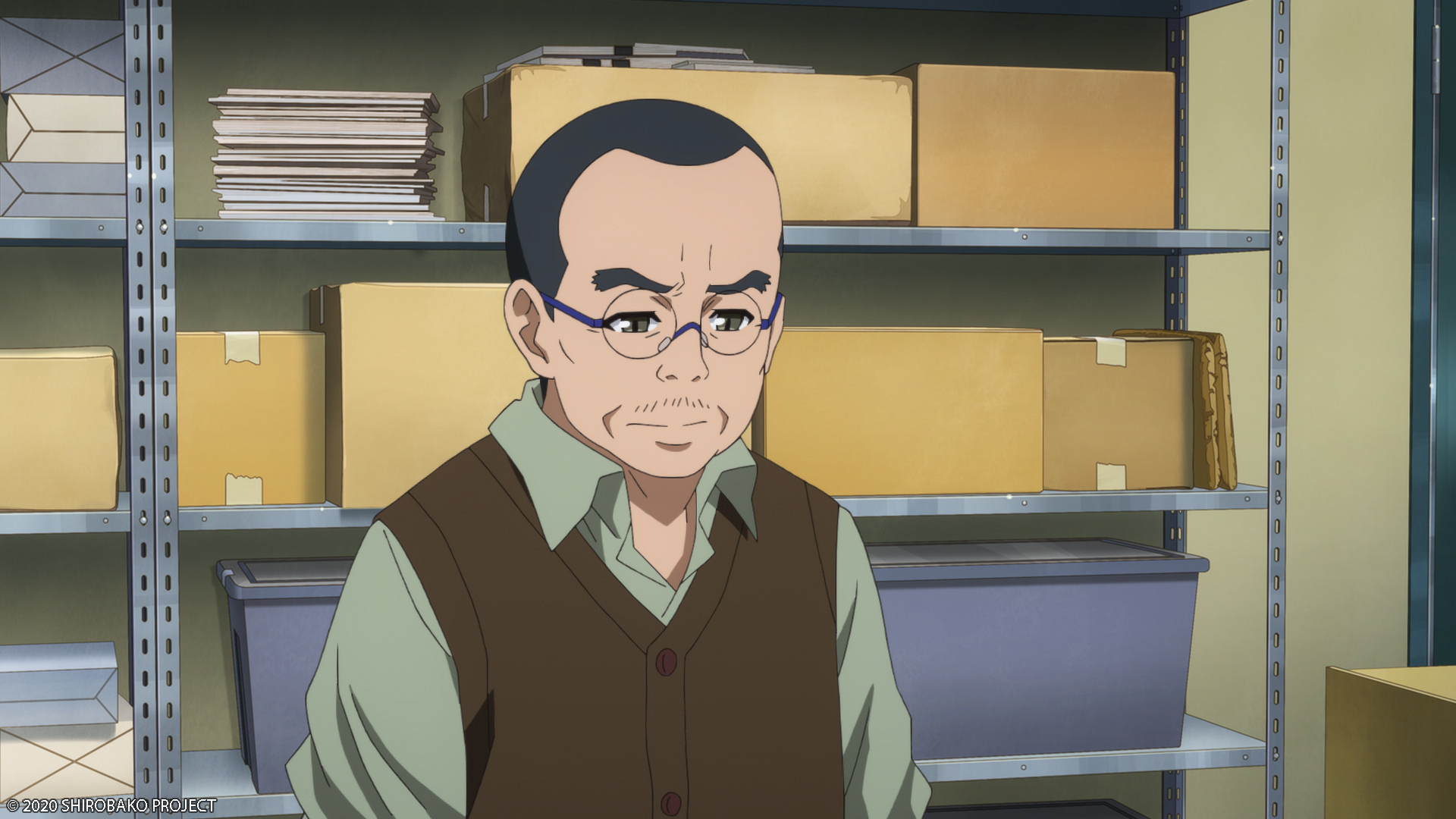 gaussian_: The movie opens with us realizing Musashino Animation has completely fallen by the wayside. Starting the movie at a pretty bleak point, in contrast to the happy ending of the original series, was definitely a bold move and sets the hook well. This opening portion, which covers approximately the first third of the movie, is a fantastic piece of work in terms of setting the tone. You can really feel the struggles and pain of working in the industry when things go south, despite your best efforts.

anime-prime: I felt the beginning was the best portion of the film. The characters and story had room to shine, and the film really evokes empathy from the viewers.

gaussian_: Honestly, from how harshly realistic this portion of the movie seems to be, I have to wonder if it's based on real life experiences of the staff. While P.A. Works has been quite successful since their founding, I'm certain staff members had experience in other studios which may have met a fate similar to Musashino Animation.

anime-prime: I was thinking something similar, as if perhaps this movie all along was the ultimate meta, self-referential anime. The main plot of the movie (which is introduced in its second third) deals with making an animated film in ten months, which the characters complain is too short of a timeframe. It would be unlikely, though amusing, to learn that this film had the same backstory.

gaussian_: Thinking in terms of when this movie was being made, P.A. Works was struggling through the production of Fairy Gone, which was not considered a critical success by many. Perhaps it was nothing more than channeling P.A. Works' frustrations into the movie. 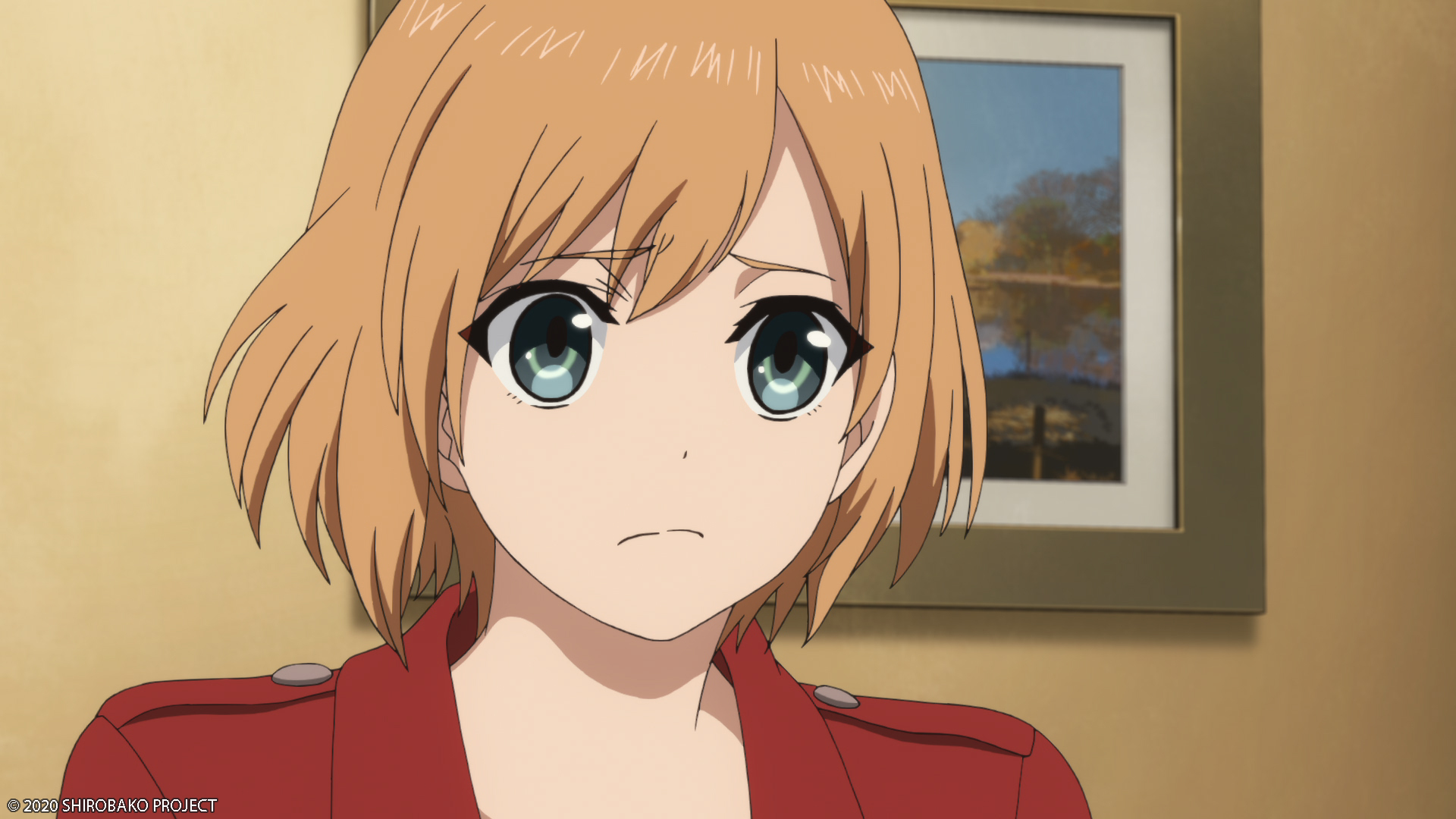 gaussian_: Four years are supposed to have passed between the movie and the original series, but other than life changes necessary for plot points, all the characters are the exact same people as they were in the final episode. Considering P.A. Works knows how to do a time skip well (Nagi no Asu kara/A Lull in the Sea), this was a significant disappointment.

anime-prime: Well, unlike most anime, Shirobako's large cast features mostly adults, who generally don't change much in only four years. The five main characters are a bit different though, and we do see that they have grown during this missing time into respected professionals in their fields.

gaussian_: That's definitely fair pushback. Still, I would have enjoyed seeing some life changes in the five main characters. They're all young women, so at least one new relationship or something would have been in the realm of possibility.

anime-prime: Actually, there was a scene where I thought they might have hinted at a relationship for one of the five girls. Since it wasn't elaborated upon or specified, it might also have just been nothing. Unfortunately, there isn't much progression for the main characters after the first third of the film. 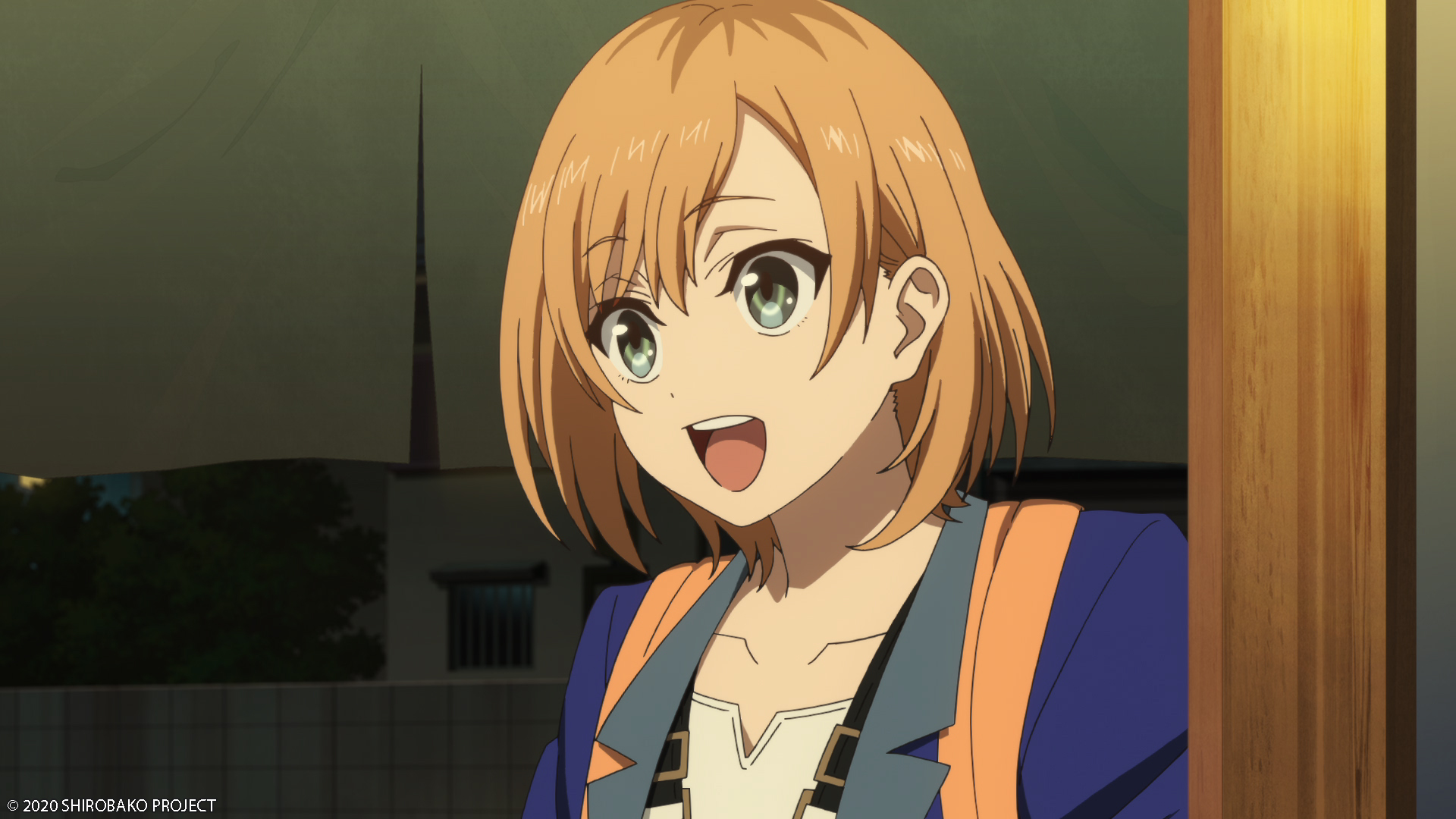 gaussian_: The first third of the movie ends with a musical number, which broke my immersion. It is a unique move and could have played out well; however, I found it undermined the previous atmosphere and made the transition to the next arc of the movie more awkward than cathartic.

anime-prime: The musical numbers spread throughout the film were definitely out of place. While very common in western animated movies, it's not a technique often utilized in modern anime films. Despite that, P.A. Works did an amazing job directing the song segments. Those sequences hit a soft spot for me, as I liked the different genres of music and various styles of animation that each one had. Considering this is an anime about anime, this was a definite plus for me.

gaussian_: I totally agree with that. P.A. Works flexed and showed that they can create excellent animation in any style—from old school, to modern, to even vocaloid CG. It was the placement and tone that hurt for me, not the effort put into each piece. Superb animation was a hallmark of this movie, backed up by equally excellent background art. P.A. Works is famous for their ability to hit the ball out of the park in this field, and they didn't disappoint at all.

Pacing in Life and Fiction 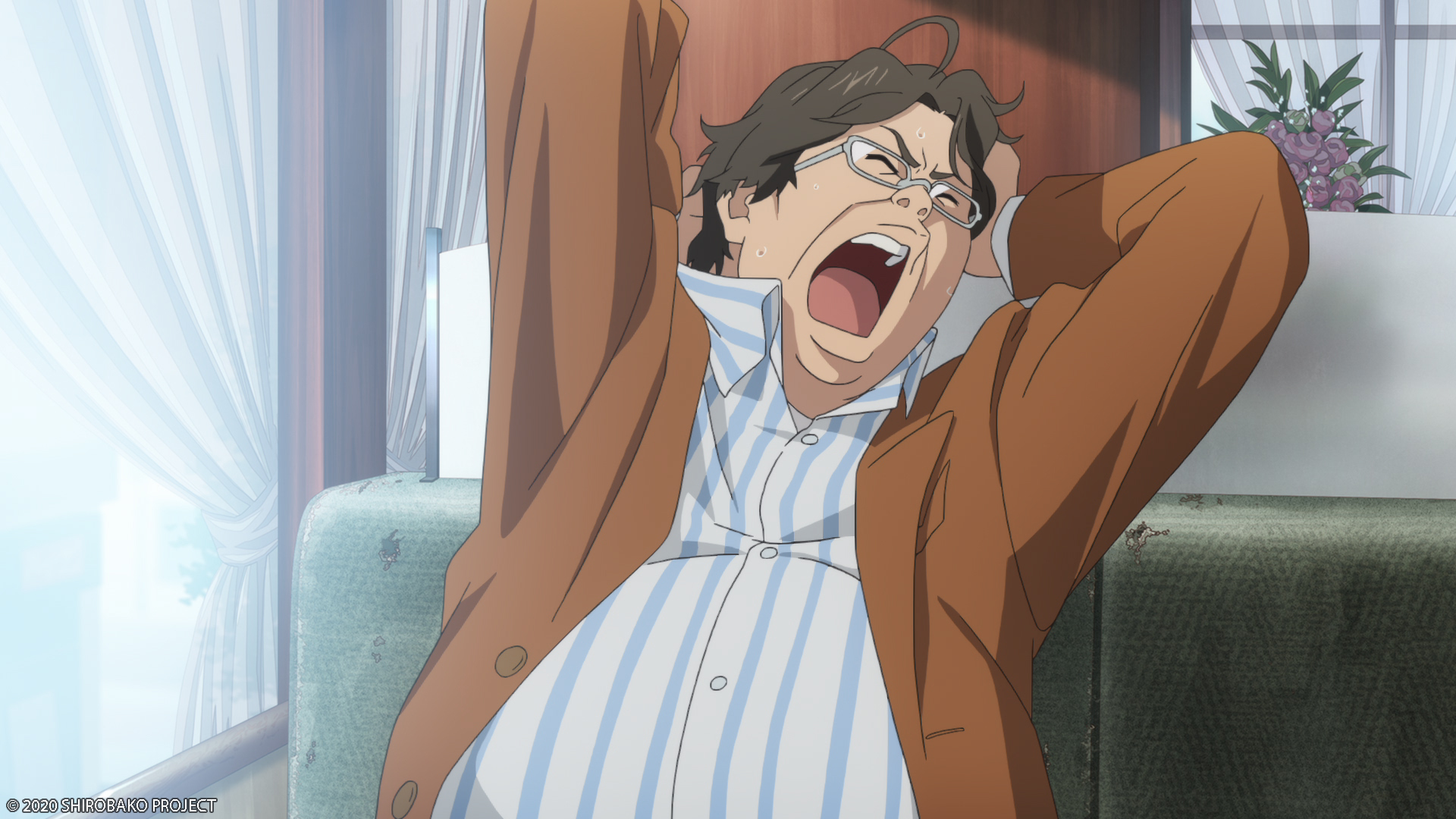 anime-prime: I think it's safe to say that a majority of the anime community views P.A Works as a studio that consistently delivers quality visuals, but is hit or miss when it comes to the story. Unfortunately, this film is another example of the studio struggling with the plot. Perhaps the reason for this was the theatrical release's limited run-time. This movie could have easily been stretched out into a full anime season to develop the plot and characters to their fullest potential. As is, however, it felt too quick-paced and tried to juggle more subplots than it was able to expand upon in a two hour story.

gaussian_: To be fair, P.A. Works is pretty new to the realm of movie making. I think the only big film under their belt is Sayonara no Asa ni Yakusoku no Hana wo Kazarou (Maquia: When the Promised Flower Blooms), and there, they had the help of the stellar Mari Okada to keep things on track.

anime-prime: That's true. In general, I find it strange that they would make a sequel film for Shirobako instead of sequel season. Perhaps this was originally thought to be a series, but after planning, needed to be a film. That said, it's impossible to know what constraints might have been at play behind the scenes. Again, all of the concepts in this film were good, but they were squished into a short run-time that negatively affected all of the character arcs and subplots.

gaussian_: I think the biggest casualty of the time rush was the movie's tension level. The main conflict never felt pressing since everything was moving so quickly.

anime-prime: Exactly! Musashino Animation is supposedly on a massive time crunch throughout the film, yet it never feels like it. After the first third of the film sets the tone, the main plot of needing to produce an anime from scratch in ten months only comes into play at the 45 minute mark. This means they don't even start producing the film until one hour into the two hour film. The result is barely five minutes of screen time where the characters act like they are racing against the clock. Instead, the movie focuses on character introductions, subplots, and minor growth for characters that we already know from the first season... thus causing the film to feel a little disjointed. 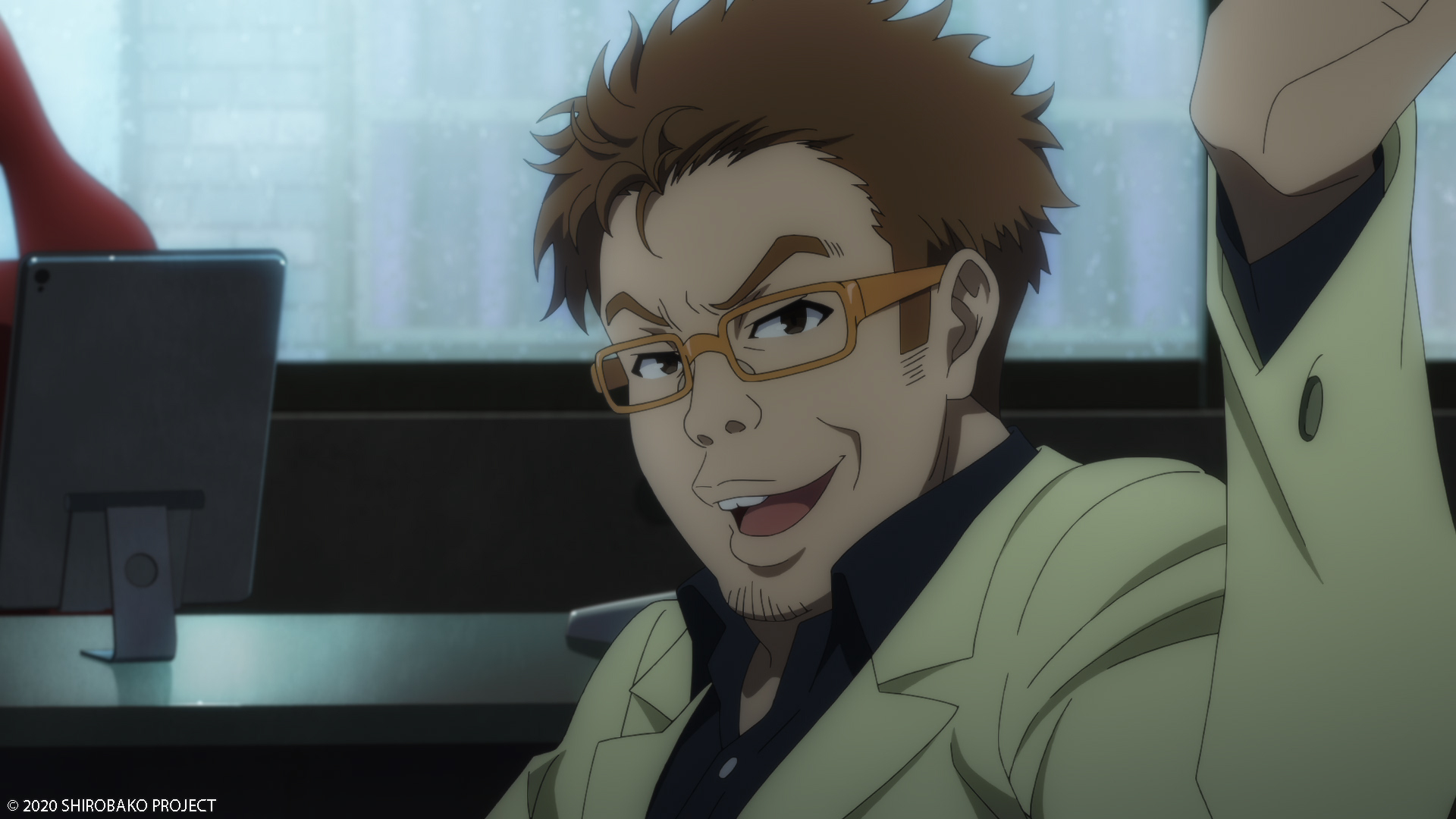 gaussian_: On a positive note, though perhaps a little unexpected for a slice-of-life film, the last third does feature two excellent action sequences. These scenes are even more apparent due to the unique animation and art in both. P.A. Works deserves the highest praise for what they pulled off here.

anime-prime: Honestly, those two scenes were among the best in the film. Not only were both beautifully animated and well scored, they also both tied into the two major plots: first, the resolution to the studio's struggle against a producer who constantly tried to derail the project; and second, the conclusion to the five girls' goal of making an anime together. If the fictional anime featured in the movie was made into an actual anime, I would watch it in a heartbeat.

gaussian_: P.A. Works incorporates the recurring theme that many troubles in the animation industry stem from difficulties with producers and other copyrights holders of the work. I would not be surprised at all if part of why P.A. Works makes so many original anime is due to being burned too often by these entities. Perhaps we should be more conscious when criticizing animation studios, since many things we may think should be under the studios' control, simply aren't. 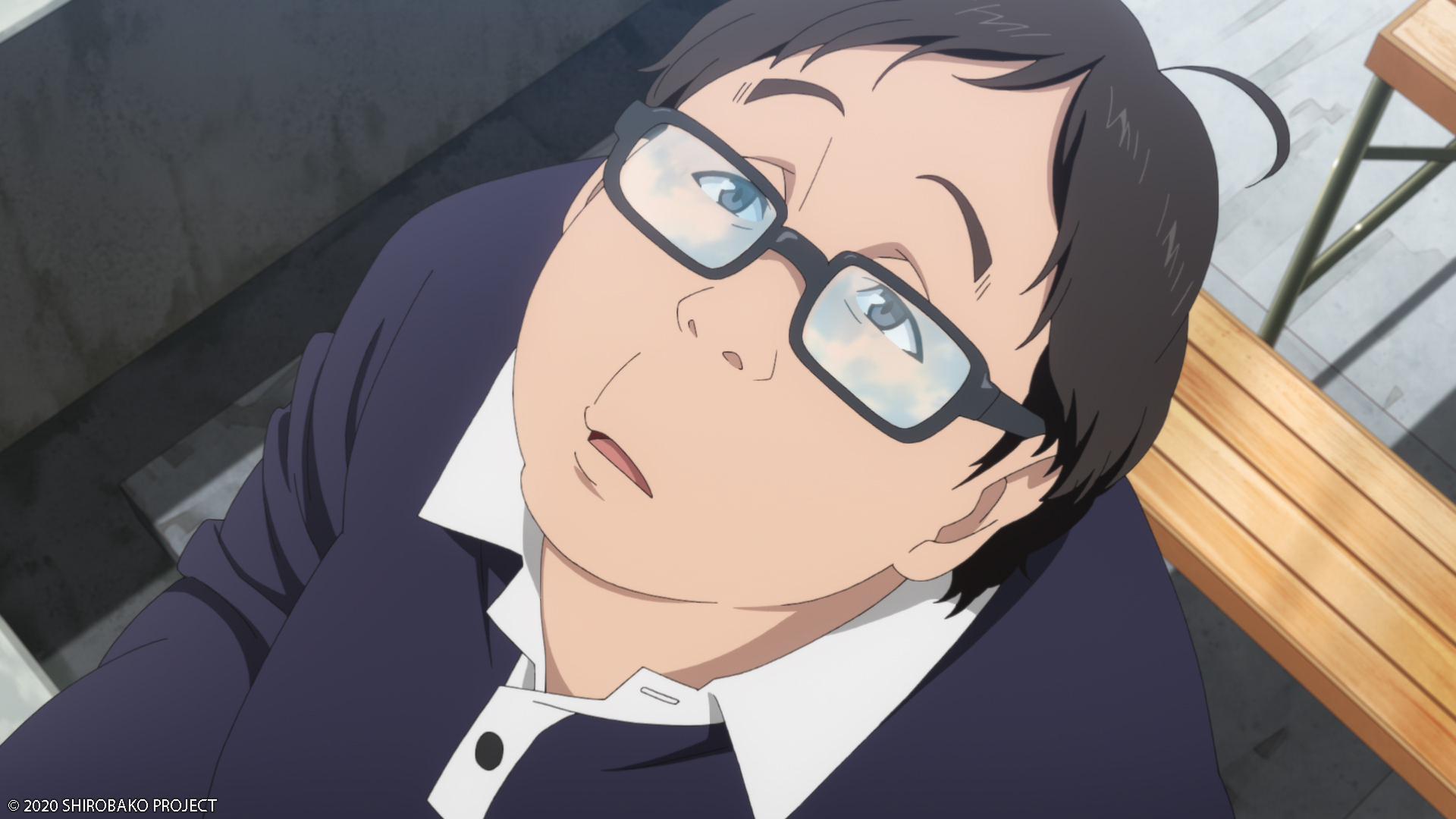 gaussian_: To be clear: This was a good movie, and I don't regret watching it at all. It's fun to see the characters you love again, and the movie does have several moments that really shine and make the experience completely worthwhile.

anime-prime: The film has its flaws, but we recommend giving it a watch, even if you aren't familiar with the original series. Not only will you learn plenty of inside info about how anime is made from start to finish, you also get to witness unique musical numbers and two phenomenal action sequences (which combined equate to about a ten minute sakuga-fest). In fact, some of the issues with this film wouldn't be as pronounced if it was your introduction to the franchise. Much of the movie's run-time was focused on reintroducing characters that viewers of the original series were already familiar with; however, if you haven't seen the series recently (or at all), then it probably wouldn't bother you as much.

Also, if you're going into this expecting the story to wrap up everything from the main series, be aware that the film doesn't really do that. In fact, it even teases a possible sequel in the end credits.

Thanks for reading our thoughts, and we hope you have a chance to enjoy Shirobako: The Movie for yourself.

If you missed the opportunity to see it in theatres—or want to watch it again—the movie will be available on October 26th in Blu-ray, DVD, and digital formats. Follow Eleven Arts' Twitter account for updates!